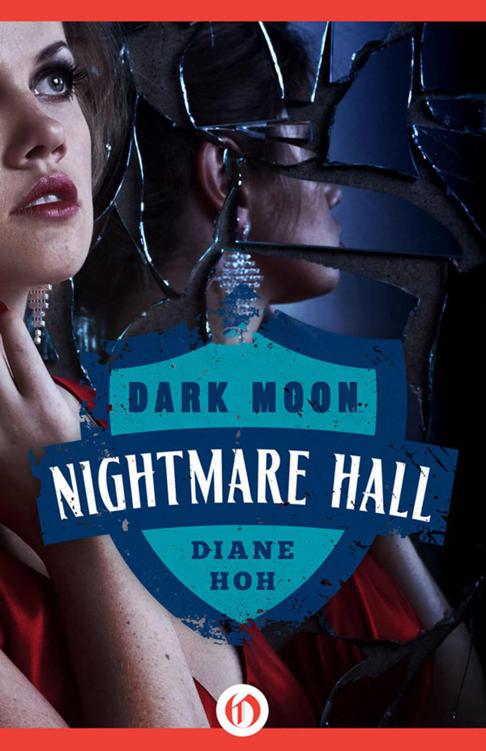 A Biography of Diane Hoh

“I
HATE YOU!” THE
teenager cries. The face is scarlet with rage, the eyes dark with fury. “Everyone else is going. Why do you have to be so uptight about everything? You’re ruining my life! I wish you would just die!” Sneakered feet whirl, race up the stairs, stomping down upon each riser. The tall, thin figure in jeans and a plaid shirt runs into the bedroom and slams the door, locking it. Hurtling onto the bed, the teenager lies there, face down, furious.

A full moon shines through the window, illuminating the darkness.

The teenager lies prone on the bed for a long time, finally falling asleep, only to be awakened sometime during the night. The head lifts, glancing at a luminescent clock on the bedside table. Quarter past two in the morning.

The moon is now visible through a different window. The figure on the bed rolls over, thinking angrily of being forced to miss the best party of the year. At that moment, a thick, dark shadow slides across the round, pale globe, hiding it as effectively as if someone had just drawn a black velvet curtain over it.

The teenager returns to sleep.

There are people downstairs, in the living room, in the kitchen, spilling out onto the wide front porch. Relatives. Neighbors. Friends of the family. All are ashen-faced, with stunned, bleak eyes.

Because something
has
happened. Something
is
wrong.

The mother who was wished dead only the evening before, has obliged
—
by dying.

Dying during the night, of what the teenager learns in a sympathetic whisper from a relative was a “heart attack.” Unexpected. Shocking.

But the teenager knows better. There was no heart attack. The heart stopped beating because it was willed to stop. It stopped beating unexpectedly, for no apparent medical reason because someone wished that it would. Wished hard. Wished so hard that the person had summoned up a power they didn’t even know they possessed. The power took over and, under the eerie, luminous glow of a full but shadowed moon, made the heart stop beating.

Didn’t mean to. Didn’t even know about the power.

But it’s too late now.

Still … so many parties to go to, so much fun to have
—
and nothing to stop that now. Nothing to get in the way. The father won’t. Doesn’t care about things like that. Too busy, too preoccupied, never did have anything to say about it. Only
her. She
was the one who ruined everything.

Won’t be ruining anything anymore, will she?

What time did it happen, is the question posed to the father.

He looks stricken. What? Why do you ask? What difference does it make?

What
time?
the now-motherless teenager insists.

“Two-fifteen,” the father answers reluctantly. “She made this terrible sound, as if someone had just pounded her in the chest, and it woke me up. I glanced at the clock as I woke up and saw it was two-fifteen. I tried to revive her, but
…”

Two-fifteen. The very moment that the dark
s
hadow had passed over the full moon.

The teenager would think about that later.

Right now, the thing to do was cry and carry on as expected. It wouldn’t be good to let people think there weren’t any feelings. Everyone has feelings. Even people with special powers.

T
HE HIGHWAY BETWEEN SALEM
University and the town of Twin Falls was so congested with traffic, the cars were barely moving.

“It looks like a parking lot,” Eve Forsythe said in dismay. Her roommate and best friend, Andrea Coffee, peered impatiently out over the steering wheel, searching for an escape route. “We should have arranged for the parade to start on campus and move into town instead of the other way around,” Eve went on. “I was supposed to meet Kevin and the rest of the Founders’ Day committee on Fourth Street half an hour ago! Andie, can’t you steer around some of these cars?”

“Oh, sure, Eve,” Andrea retorted sarcastically, “a fender-bender right now is just the ticket to solve this traffic problem. Anyway,” she added after honking in vain several times, “we all agreed at the first committee meeting that it wouldn’t make any sense for the parade to move from campus to town. The Founders’ Day celebration is mostly taking place on campus. That’s where the carnival is set up, right? So that’s where the kick-off parade needs to end up.”

Eve sighed. “I know. You’re right. But who knew that practically everyone on campus would decide to drive into town? It doesn’t look like anyone had the brains to take the shuttle, the way Kevin said they would.” She glanced out her window and groaned. “And it’s going to rain! I can tell. The wind is fierce and that sky is black as death!”

The car inched forward slightly. “I never should have agreed to cochair this committee,” Eve murmured, half to herself. She leaned her head back against the seat. Had her long, wavy hair suddenly slipped free of the wide brass barrette pulling it away from her face, it would have draped itself over the tweed upholstery like a dark, silken cape. But Eve never wore her hair loose. Ever. “Having Kevin as co-chairman helps, but I know who’s going to feel responsible if the celebration falls apart.
I
am!”

“That’s because you’re the responsible type,” Andie said amiably, stepping on the gas again as a gap appeared in front of her. Her freckled hands held the steering wheel lightly, and her mop of tightly curled, burnt-orange hair moved from side to side as she surveyed the long lines of cars boxing her in. “That’s why you were elected over everyone else on the committee who wanted to be chairperson. Like me, for instance.” She grinned, and the freckles on her cheeks danced. “Chairing this week-long event would look
so
good on the résumé of a future public-relations genius. Especially if this thing is a success.”

Eve groaned. “And what if it isn’t? What if the whole thing’s a huge disaster? Would you want it on your résumé then?”

Andie shook her head, her grin spreading wider. “Nope. That’s why I didn’t scream and tear my hair out when you and Kevin were picked over me as chairpersons. I figure, as just one more member of this committee, if things go okay, I can take part of the credit. But if it flops, I’m free and clear. All the blame goes to
you.”
She glanced sideways at Eve. “Why are you so jittery? You’ve organized tons of things. We all know that. Rumor has it that you’ve never fallen down on the job in your life.”

Eve laughed without humor. Andie’s earlier comment had stung. “The responsible type?” It made Eve sound so … dull. “Right. You know what they say,” she said in a brittle voice. “If you want anything done right, get Eve Forsythe to do it.”

It wasn’t as if Andie was wrong. She wasn’t. Eve
was
more organized than most people. Did that make her dull? Well, maybe she
looked
dull, which could be why she hadn’t dated very much since she arrived on Salem’s campus. Could be the neatness that scared guys away. She was very neat. Impeccably neat. Her clothes were always clean and pressed, every skirt matched every sweater, her hair was always carefully restrained, and she was obsessive about flossing thoroughly every night before she crawled into her bed, which she made first thing every morning. All of her life, teachers had commented not on how brilliant she was or how creative or how clever, but on how “neat” her work was. It had seemed to impress them.

Neatness seemed to indicate to most people a sense of responsibility, as if keeping your appearance in order guaranteed that you could keep everything else in order, too. Meaning that you would be the perfect person to run fairs and carnivals and bazaars and committees and take care of all those tedious little details that messier people never wanted to bother with.

And the truth was, she
was
very good at that kind of thing. Hadn’t had a flop yet.

But … she hated every minute of it. It wasn’t who she was, not at all. If the people who always voted for her could have seen inside her mind, seen how tousled and tangled and chaotic it was, they’d have chosen someone else. If they could see how she had struggled with every assignment, every office, the organizing of every event, seen how she had to fight desperately for every moment of concentration, they might even have picked someone whose shirt trailed carelessly over the edge of a skirt or pair of jeans, someone whose clothes were always a mass of wrinkles and stains, someone whose hair was an untamed tangle of wild curls, as hers would be if it weren’t for the ever-present barrettes.

Eve Forsythe was a fraud, but she was the only one who knew it. The person everyone saw … the neat, orderly, and organized Eve Elizabeth Forsythe, a dean’s list freshman at Salem University, did exist. But only with great effort and concentration on the part of the
real
Eve Forsythe. The real Eve Elizabeth was a totally different human being. Dreamy. Vague. Unfocused, with thoughts and emotions as wild a jumble as any mass of thick, naturally curly hair. It was her mother, of course, who’d created the Eve Forsythe everyone saw.

When she was nine-and-a-half, her father had left the house, carrying only a suitcase and two boxes full of books. “Sorry, Kitten,” he had said while her mother stood, stony-faced and silent, in the kitchen, “but this man’s breaking out of jail, and the warden there,” gesturing toward the kitchen, “says you can’t come. Not fair to leave you here living under more rules and regulations than in any man’s army, but I can’t spring you.” He knelt then to kiss her on the cheek. “I just hope you have the strength to escape one day. Don’t wait too long, honey.”

And he was gone, leaving her in the sole care of his soon-to-be-ex-wife, Nell Forsythe, who viewed the slightest speck of dust, the merest hint of disorder, and any unrestrained locks of curly hair with all the horror most people reserved for disasters like world wars, fatal plane crashes, and serial murders.

Eve had learned, very quickly, to pretend she hated those things, too. Because unlike her father, who was an adult, she
couldn’t
leave. Not for a long, long time. As for fighting with her mother, what good would that do? If Richard Forsythe, a strong and strong-minded adult, hadn’t had the strength to stand his ground and do battle against Nell, what chance did a shy, dreamy nine-year-old have? It was easier to give in and live the way her mother wanted.

Somewhere along the way, the myth that the daughter was as well organized, capable, and efficient as the mother had established itself, almost without Eve’s awareness. And she had found herself heading one committee after another, organizing countless events, being elected to numerous offices.

Her mother was thrilled.

A Bad Day for Mercy by Sophie Littlefield
Fatal Honor: Shadow Force International by Misty Evans
Horror in the East: Japan and the Atrocities of World War II by Laurence Rees
The Tempering of Men by Elizabeth Bear
All Bets Are On by Charlotte Phillips
Darcy & Elizabeth: A Season of Courtship (Darcy Saga Prequel Duo) by Sharon Lathan
The Golden Age of Death (A CALLIOPE REAPER-JONES NOVEL) by Benson, Amber
Captive Heart by Michele Paige Holmes
Supernatural: The Unholy Cause by Schreiber, Joe
My Trip Down the Pink Carpet by Leslie Jordan