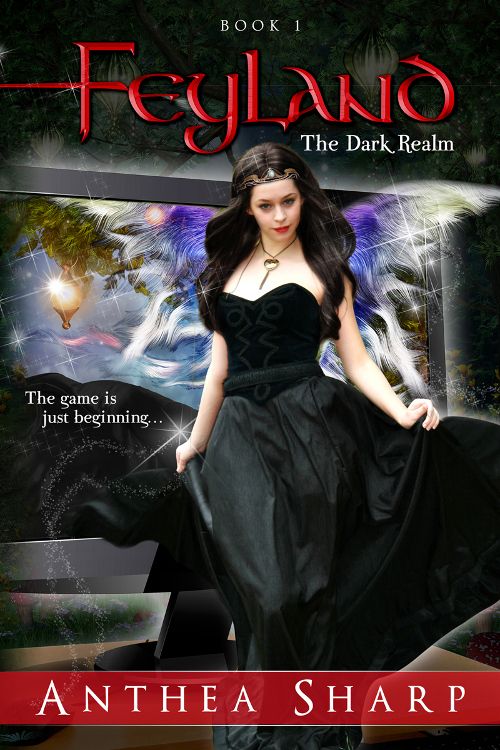 Book 1 in the FEYLAND Trilogy

This is a work of fiction. Names, characters, places, and incidents are the product of the author’s imagination. Any resemblance to real events or persons is purely coincidental.

Copyright 2011 Anthea Sharp. New cover edition 2012. All rights reserved. This e-book is licensed for your personal enjoyment only. It may not be re-sold or given away. Support independent authors! To obtain permission to excerpt portions of the text, other than for review purposes, contact
[email protected]
. Print copies available at most vendors. Visit the author at
www.antheasharp.com
and
join
Anthea’s
new release mailing list
for a free story, and to hear about new releases and reader perks!

QUALITY CONTROL: If you encounter typos or formatting problems, please contact
[email protected]
so they may be corrected.

THE BALLAD OF TAM LIN

For all the readers in my family – but most especially, for Brynn.

J
ennet faced the Dark Queen, her mage staff at the ready. Excitement fizzed through her blood like it was carbonated. This was it. She’d completed the quests, mastered each level of the game, and made it here. The final boss fight.

“Fair Jennet.” The queen’s voice was laced with stars and shadow. “You think to best me in battle?” A faint smile crossed her pitiless, beautiful face. Her dress swirled around her like tatters of midnight mist.

“I plan on it,” Jennet said. She tucked a strand of blond hair behind her ear, then shook off the sudden anxiety that settled on her shoulders, cold as snow.

She had no idea what this particular fight held. Feyland was the hardest sim she’d ever played, full of weird twists and turns. She thought about it all the time. The game filtered into her dreams, shaded the edge of her days. Sometimes the computer-generated world felt more real than her ordinary life.

“Very well,” the queen said. “I accept your challenge.”

Jennet couldn’t see any weapons on her opponent, and that dress was no substitute for armor. Safe bet that this was going to be a magical duel, spell-caster against spell-caster. Jennet flexed her fingers around the smooth wood of her staff. Anticipation spiked through her, tightening her breath.

Fantastical creatures watched from the edges of the clearing: feral-faced women with gossamer wings, dark riders with red-eyed hounds at their heels. The sound of drums and pipes wove through the shadows. Overhead, a sliver of moon tangled in the black branches of the trees. Then, between one heartbeat and the next, silence fell.

A dark figure stepped forward, forbidding in midnight armor and a wicked helm, and Jennet’s stomach clenched. The Black Knight. She’d barely beaten him in an earlier quest. If he got involved in this fight, she was in severe trouble.

He held his gauntleted fist high and grated out a single word. “Begin.”

It echoed eerily through the glade, and the fey-folk let out a rough cheer. There was no one to cheer for Jennet.

Without hesitation, she tipped her staff and shot a bolt of fiery white light at the queen. A sphere of shadow appeared, blocking her attack and swallowing the fire into its dark depths. More spheres materialized and began floating toward her, called by the Dark Queen. Jennet ducked and wove, avoiding their deadly touch.

Lightning crackled from her staff, illuminating the clearing with shocking white light, but the queen evaded her bolts. Still, Jennet kept pressing the attack. The dark spheres were multiplying now, bobbing in the air on all sides. A low, menacing hum surrounded her as she tried to find a clear shot.

She couldn’t afford any mistakes - but the fight was pushing her to her limits. Worry started to nibble at the edges of her concentration. She just had to watch for an opening… there. She took aim and sent another bolt crackling through the air.

White fire sizzled and Jennet heard the queen gasp. Yes! She could do it. She could beat this game. The first player ever to claim victory over Feyland.

A dark sphere brushed against her shoulder. Ice stabbed into her skin, sent numbness down her arm until she could barely hold onto her staff. She stumbled back, trying to regain the rhythm of the battle. Keep breathing. Keep fighting. But where was the queen? The place where her opponent had stood was now filled with twisting shadows.

Everything rippled, as though the clearing was made of cloth billowing in a sudden gust. Jennet heard high, chiming laughter as she fell backward…

And landed in an ornate chair set before a feasting table.
What?
She jumped up, heart racing, and knocked the edge of the table. A goblet sitting in front of her shook, sending a drop of deep red liquid to stain the white tablecloth.

“Sit down, Fair Jennet,” the queen said from her place across the table. “This is the next stage of our battle.”

“You changed the rules! You can’t do that.” Jennet’s legs felt shaky as she edged back into her chair. She was so not prepared for this.

The queen laughed. It was the sound of ice shattering on a black lake. “Of course I can. This is my court. My realm. You are but a visitor. Please - drink.” She waved one delicate hand at the goblet.

Jennet’s mouth said the words, but her hand reached out anyway and lifted the heavy silver goblet. A sweet, thick smell drifted from the cup. Roses and burnt sugar. The edge of metal touched her lips.

No. She was not going to do this. The queen might try to control their battle, but she could still fight back. Fingers trembling from effort, Jennet forced the goblet away. The air around her was sticky and nearly solid, like dough. She pushed against it, her breath coming in gasps, until at last the cup touched the table.

“Very well.” The queen’s voice was edged with frost. “If you disdain my hospitality, then you must answer a riddle.”

That seemed safer than drinking whatever was in the goblet. And the game wasn’t giving her a lot of other options. “A riddle? All right.”

Maybe by John Locke
Hotshot by Julie Garwood
The Purrfect Plan by Angela Castle
Married to the Game by Chunichi
Summer in Good Hope (A Good Hope Novel Book 2) by Cindy Kirk
Back in Service by Rosanna Challis
The Blade of Shattered Hope (The 13th Reality #3) by James Dashner
Unyielding (The Ashborne Trilogy Book 2) by Kat Lilynette
Chain of Attack by Gene DeWeese
Enemy Camp by Hill, David