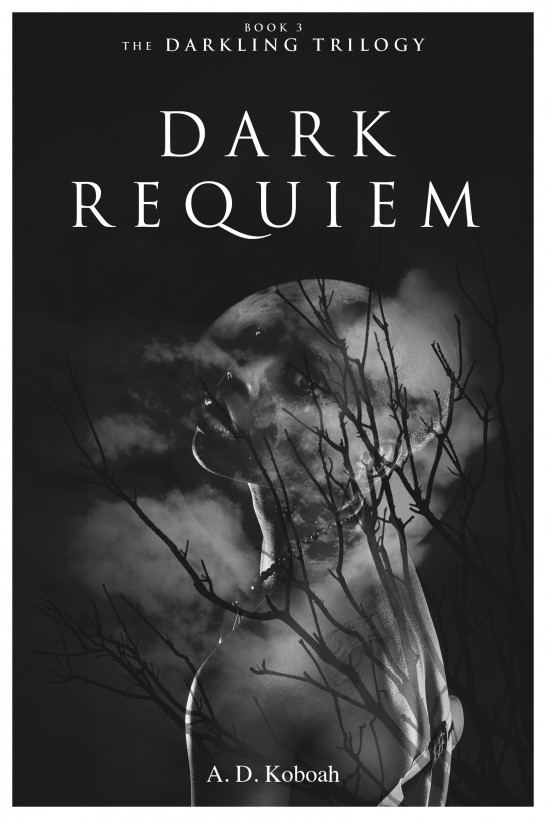 All rights reserved. No
part of this book may be used or reproduced in any manner without
written permission except in the case of brief quotations embodied
in critical articles and reviews. For permission, contact the
author at
www.adkoboah.com

This story is a work of fiction. Names,
characters, places and incidents are either products of the
author’s imagination or are used fictitiously. Any resemblance to
actual events, locales, organizations, or persons, living or dead,
is entirely coincidental.

First and foremost, I want to thank God for
blessing me with an imagination that has allowed me to not only
escape everyday monotony, but also to take others on this journey
with the creation of these novels.

I would like to take this opportunity to
thank my family and friends for their financial and moral support
in getting this trilogy published.

I also want to thank the
fantastic Cynthia Boudreaux for always coming through for me and
for helping to get
Dark Requiem
in shape. I’m still addicted to adverbs but I’m
sure she’ll succeed in beating it out of me—eventually.

Thank you to the wonderful Alicia McCalla who
read an early version of the novel and helped me sort out the many
problems contained within the manuscript. I’m beyond grateful.

Last and not least, I want to thank the
wonderful people who have stayed on this journey with me to the end
of the trilogy and who have contacted me on Facebook, Goodreads and
email to let me know they have enjoyed my novels. I appreciate you
all and love waking up to read your reviews of my books (both good
and bad).

I also want to say a special thank you to
Sutana as something she said in her first email helped lead me to
the revelation revealed towards the end of this novel. I hope you
approve, Sutana. :-)

For my beautiful niece
Alicia.

"I fear I am writing a requiem for
myself."

The being I had been
waiting for first entered my world when I was five. It was on one
of those hot summer afternoons in New York when the heat hung in
the air like thick invisible clouds. Still the streets bustled with
people, cars purring like large cats as they rolled by.

The sunlight that washed
the lively city streets in gold did not reach the heavy gloom that
hung within the walls of my home. Relatives came and went. Their
faces were always tense, fear lurking in the shadows behind their
eyes. Whilst the sound of weeping reached me from my mother’s room
along with snippets of whispered conversations.

One of my family members
had gone missing and everyone feared the worst. And in the gloom
that had descended I was, as always, forgotten and simply left to
the nanny.

The nanny, Alessandra, was
a short, slim girl in her early twenties who had only been working
for my parents a week. She dragged me out into the wilting heat
that afternoon and when we came to the entrance of a bank, I came
to a stop, forcing her to face me. I pulled my hand out of
hers.

“
I want ice cream. You
said you were taking me to the park for ice cream.”

The tension that reigned
at home had stretched my nerves to a brittle thread, making me act
up a little bit more than usual. And perhaps even then I was
already aware of the Other; could already hear its sepulchral
footsteps drawing ever closer.

“
Quiet!” Alessandra
snapped in her heavy Italian accent. She wore thick black eye
make-up and bright red lipstick. Her eyes were like black stones.
“I did not tell you I was taking you to the park. I said I
would
think
about
it.”

She took hold of my arm
once more in a painful grip and dragged me with her into the cool
bank.

“
Aw, that hurts. I want
ice cream.” A few people were already starting to stare at
us.

“
If you behave yourself,
then I will take you. If you do not behave, you get no ice cream.
It is hard to believe everyone at that house—from your mother to
the servants—are scared of you. You are just a child and it is time
everyone began treating you like one!”

We were now by a row of
seats opposite the tellers. She picked me up and sat me
down.

“
I’m not waiting.” I
scrambled off the chair and stamped my foot. “I want ice cream
and
I want it now
!”

She leaned over me, her
mouth pinched, her eyes narrowed to black slits.

“
You will sit here until I
have finished my business, do you understand?”

I felt hot, petulant anger
rise and spill over in a childish flow of malice. “You’re stupid!”
I said.

“
You’re stupid!” I
repeated, letting a spark of something I did not understand let
alone know how to control spill from my lips. “He’s married. He
takes the money you send him and laughs because you’re stupid!
Stupid, stupid, stupid!”

The colour completely
drained from her face until it appeared to be a white mask with
slashes of heavy black eyeliner and vermillion lipstick. Her mouth
twisted in anguish and her voice was little more than a ragged
whisper when she spoke.

I just looked up at her,
having no idea where those words, the knowledge that had affected
her so, came from. She grabbed me by the arm and dragged me back to
the chair. She leaned over me. Anger, and perhaps even a little
fear, passed behind her eyes like shadows beneath murky
water.

“
You little brat.”
Everyone in the bank was staring at us now. “You sit down and if
you move from that chair, you will not have any ice cream ever
again. Now sit!”

She straightened, took a
shaky breath, and moved to join the queue. She reached into her
bag, her gaze completely absorbed with its contents, her face
deathly white, her hands trembling.

It was all the time I
needed. I slipped off the chair and darted out of the bank doors as
a young woman was entering, stepping into the warm arms of the
sunlit afternoon.

She wasn’t going to stop
me getting my ice cream. Central Park was a short walk away. I
moved down the street in the direction of the park.

When I got there, the
park—an ocean of green amidst the noisy concrete world—which had
always seemed as familiar and as welcoming as my very own back
yard, seemed vast and foreign. The throngs of people, distant
giants to someone my size, moved to and fro in the bright sunshine.
A band was playing somewhere in the distance, the jangly sounds
adding to the disorientation I felt. When I entered the park I
walked in the direction I believed my favourite ice cream stand to
be. It was a while before I realised I did not know how to find
it.

I came to a stop then, the
heat making me feel lightheaded, little streams of sweat running
down my back. I turned around to try and make my way out of the
park only to realise I recognised nothing which would point the way
to the exit. The air around me suddenly seemed too thick and humid
and my breath hitched in my throat as I struggled to draw it in. I
realised that for the first time in my short life I was completely
and utterly alone. Suddenly the mean nanny, who had gripped my arm
so spitefully, was a sight I would have given all my dolls to see.
But she was not to be found amongst the throngs of adults I could
see moving through the park.

I whirled around to see a
young coffee-coloured teenager in green shorts and a white T-shirt.
She was focused completely on me, but her eyes were blank, as if
the light behind them had been dimmed.

“
No, you’re lost. Don’t be
scared, baby. You can sit with us.” She paused, then spoke as if
she were reading words from a page. “Alessandra will be here in a
little while.”

Relief washed over me like
a cool breeze and I nodded, reaching for the hand she held out to
me.

Then, almost like a burst
of radiance lighting up an obscure, stormy sky, I felt an intense
flush of emotion thrill through me. I spun around, my sixth sense
tingling with an intensity that made my hands tremble.

The words of the teenager
faded away as I searched the park, not even sure of what it was I
was looking for.

Midnight's Master by Cynthia Eden
Oliver Strange - Sudden Westerns 03 - The Marshal of Lawless(1933) by Oliver Strange
Murder on the Ile Sordou by M. L. Longworth
O'ahu Lonesome Tonight? (Islands of Aloha Mystery Series #5) by Bassett, JoAnn
Winners by Danielle Steel
Quarantine by James Phelan
Out of the Past by J. R. Roberts
Mine to Lose by T. K. Rapp
The Grownup by Gillian Flynn
On the Other Side by Michelle Janine Robinson