Read Darker Than You Think Online

Darker Than You Think (10 page)

The
hurt on old Ben Chittum's dried-up face moved Barbee to call
impulsively: "Come along with me, Ben âI'll drive you back
to town."

"Thanks,
Will, but I'm okay." The old man managed a stiff little grin.
"Don't you worry about me. I know Rex will come on out to see me
when they get that box safe to Sam's place. Of course I'm
disappointed, but I'll be okay. Hell, I'm spry as a spring lamb!"

Barbee
glanced back to be sure that April Bell was still in the telephone
booth, and followed a hunch. He walked quickly to the big trash can
behind the terminal building and fumbled under discarded newspapers
and candy wrappers and a crushed straw hat.

It
was the same sort of hunch that had led him to a hundred news
storiesâthe sort of intuition, arising from nowhere and yet
oddly certain, which Preston Troy called the essential equipment of
the good reporter. The nose for news. Once he had mentioned it to Dr.
Glenn, and that suave psychiatrist told him that the faculty was
nothing more than logical reasoning, working below the level of his
conscious mind. Glenn's glib explanation didn't quite satisfy him,
but he had come to trust his hunches.

Under
the broken hat, he found the snakeskin bag. 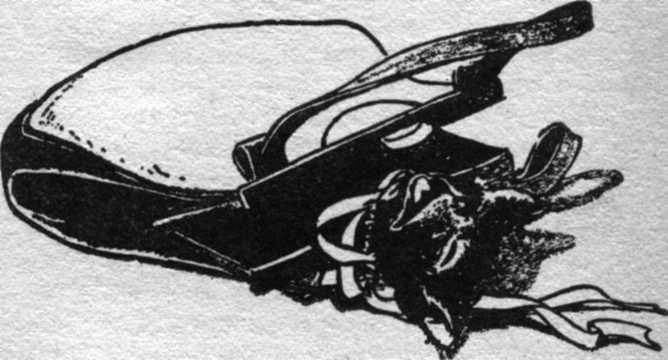 Two
ends of red ribbon fluttered beside the clasp, crushed and twisted as
if they had been wrapped around straining fingers. Barbee snapped
open the bag. Inside was the small, limp body of Aunt Agatha's black
kitten.

The
red ribbon, tied in a slip knot, was drawn into a noose so tight it
had almost cut off the little swollen head. The pink mouth was open,
the tiny tongue exposed, the blue eyes glazed and bulging. The kitten
had been expertly garroted. A single drop of blood on the white silk
lining of the bag led Barbee to something else.

Stirring
the lax little body with his forefinger, he found something hard and
white buried in the tangled black fur. He pulled it carefully away
and whistled silently as he turned it under the light from the
building. It was April Bell's lost heirloomâthat white jade
pin. The ornamental part was carved into a little running wolf, set
with a polished eye of green malachite. The work was very delicate
and trueâthe tiny wolf looked as slim and graceful, he thought,
as April Bell herself.

The
clasp behind it was open, and the strong steel pin had been thrust
into the kitten's body. A drop of dark blood followed when he drew it
out. The point, he thought, must have pierced the kitten's heart.

Barbee
remembered a little he had learned long ago in Dr. Mondrick's classes
about the theory and practice of magic among primitive mankind, but
he was no student of what are termed the occult sciences. That wasn't
necessary. The black kitten and the aged scholar had both died at the
same time, in precisely the same way. April Bell must have killed the
kitten. Had she thereby âignoring whatever part in Dr.
Mondrick's death might be due to that fashionable new biochemical
magic called allergyâintended murder? Barbee believed she had.

But
what was he to do about it? His first impulse was to carry the
snakeskin bag and its disquieting contents out to Sam Quain's
houseâperhaps he could use it for a wedge, to get a glimpse
inside that guarded wooden coffer. But he dropped the idea.
Witchcraft might be a fruitful subject for the technical monographs
of such scholars as Mondrick, but Sam Quain would only laugh, he
felt, at any suggestion of a chic modern witch with penciled brows
and enameled nails practicing her black arts in a live American town.
Sam's distant curtness had annoyed him, besidesâand he felt a
curious reluctance to get April Bell involved.

Perhaps
she hadn't killed little Fifi, after allâone of the small boys
he had seen watching the airliner come in would be a more likely
assassin. Perhaps her Aunt Agatha actually existed. Anyhow, if she
decided to dine with him, he might learn a little more about her.
Somehow, he knew he had to end the shocked uncertainty that tortured
him.

His
mind was made up. He wiped the blood from that steel point on the
lining of the bag and dropped the little jade wolf in his coat
pocket. He closed the snakeskin bag again and buried it once more
under the broken straw hat. Briefly he wondered what the refuse
collectors would think if they happened to salvage the bag, and
supposed they were used to such minor mysteries.

The
bitter wind, as he hurried back around the bright-lit building, set
him to shivering again. The cloudy night seemed suddenly darker. He
mopped his sweaty hands, and heard a ripping sound and looked down to
see that he had torn his handkerchief across.

He
strode eagerly to meet April Bell in the waiting room when she came
out of the telephone booth. Her face looked flushedâperhaps
only from the excitement of completing her first big assignment for
the
Call.
Certainly
she didn't look like a murderess. Yet he still had to find out why
she had brought the black kitten here, and whether she had really
stabbed and strangled it in a magical effort to stop the heart and
breath of Dr. Mondrick.

"Ready?"
he called. Her greenish eyes were bright, and she met him with a
smile of what seemed to be warm comradeship. He nodded hopefully
toward the parking space where his shabby coupe waited. "May I
drive you back to town?"

"Sorry,
but my car's here." She seemed to catch her breath. "Aunt
Agatha had a bridge party, and she went back to town on the bus."

"Oh."
He tried not to show his disappointment, or his doubt of Aunt
Agatha's reality. "Then how about our date for dinner?"

"I
called Auntie, and she says I may go." Her gay smile warmed him.

"Wonderful!"
he whispered. "Where do you live?"

"Huh!"
He couldn't help blinking. That swank apartment-hotel was another
business enterprise
of
Preston
Troy, and Barbee had written puffs about it for the
Star.
The
cheapest suite in it, he knew, would cost two hundred a month. April
Bell was doing very nicely for
a
cub
reporterâunless, of course, Aunt
Agatha
should
happen to be both real and wealthy.

"But
I'll meet you." The tall redhead didn't seem
to
see
his bleak astonishment, and something in her soft, husky voice made
him forget it. "Where shall we go?"

"The
Knob Hill?" he suggested hopefullyâalthough that suburban
night spot was really too expensive for reporters on the
Star's
scale
of pay.

He
walked with her out through the windy night to her own parked car. It
was a long maroon convertible, worth four thousand, he estimated
uncomfortably, on the black market. Not many cub reporters drove such
opulent machines. Perhaps, he hoped,
it
belonged
to
Aunt
Agatha.

He
opened the door and she stepped in quickly,
as
graceful
in her white fur as the tiny jade carving in his pocket. She took his
hand for an instant, and the touch of her strong cool fingers was
exciting as her voice. He put down the impulse to kiss her, afraid
that would spoil everything. His breath hastened. Murderess
or
not,
April Bell was going to be
a
fascinating
girl
to
know.

Barbee
drove back to town in his prewar coupe, and stopped at his desk in
the long city room to hammer out his stories for the
Star.
Writing,
he
was
glad of the terse, stereotyped objectivity of modern journalese.

Dr.
Lamarck Mondrick, famed anthropologist and founder of the Humane
Research Foundation, just returned from two years of excavating
prehistoric sites
in
the
remote Ala-shan desert, fell dead last night at the municipal
airport, dramatically cut off as he attempted to tell newsmen what
his expedition had discovered.

That
was the lead. He went on with the simple facts of the tragedy, filled
out with his own knowledge and biographical facts culled from the
file in the morgue. He was glad that a formal obituary had no space
for anything about April Bell, or the assassinated kitten in the
trash can.

Eagerness
hurried him back to the battered old coupe. Sliding under the wheel,
he found himself empty-handed, and realized he had forgotten to buy a
bottle. It was months since he had passed the Mint Bar, he thought,
without stopping for a shot and maybe a bottle to take along. April
Bell might be good for him.

His
own apartment was two shabby rooms, with kitchenette and bath, in a
run-down two-story building on Bread Street. The decayed neighborhood
was too close to the mills, but the rent wasn't too high for his pay
and the landlady didn't seem to care how much he drank.

He
bathed and shaved, and discovered himself whistling happily as he
looked for a clean shirt and a suit that wouldn't be too shabby for
the Knob Hill. April Bell might be what he needed. He had closed the
door behind him at eight forty when he heard the telephone ring
inside. He hurried back to answer it, shaken with a sudden
apprehension that she had decided not to see him.

It
wasn't April Bell, and that quick dread relaxed its grasp. In a
moment he recognized the clear, gracious voice of Mondrick's blind
wife, serenely sweet, reflecting nothing of the shock he knew she
must feel.