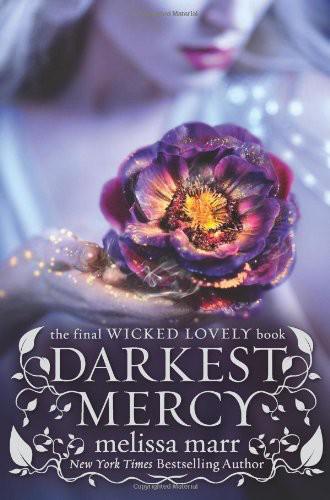 for loving Donia even more than I do, for faery wings and temp tattoos,

for putting the “good parts” at the end of the letter, for arguing and for not arguing,

Niall walked through the ruins of the tattoo shop. Shards of painted glass crunched under his boots. The floor was strewn with vials of ink,

unopened needles, electric apparatus he couldn’t identify, and other things he’d rather not identify. The Dark King had known rage before, known

grief; he’d felt helpless, felt unprepared; but he’d never before had all of those emotions converge on him at once.

He paused and lifted one of the mangled bits of metal and wire from the floor. He turned it over in his hand. Only a year ago, a tattoo machine—

maybe this one—had bound Irial to the mortal who had brought the former Dark King and Niall together again after a millennium. Irial was the

constant, the one faery that had been a part of Niall’s life—for better and worse—for more than a thousand years.

Niall stabbed his bloodied hand with the broken tattoo machine. His own blood welled up and mingled with the drying blood on his hands. His

blood. Irial’s blood is on my hands because I couldn’t stop Bananach. Niall lifted the broken machine in his hand, but before he could stab himself a

“No.” The Hound, Gabriel’s mate, Chela, took the machine. “The stretcher is here, and—”

Mutely, Chela shook her head and led him toward the living room, where Irial lay.

“He will heal,” Niall said, trying the words out, testing the Hound’s reaction to his opinion.

“I hope so,” she said, even as her doubt washed over him.

Irial was motionless on the litter. The uneven rising and falling of his chest proved that he still lived, but the pinched look on his face made clear

that he was suffering. His eyes were closed, and his taunting grin was absent.

The healer was finishing packing some sort of noxious-smelling plants against the wound, and Niall wasn’t sure whether it was worse to look at

Irial or at the bloodied bandages on the floor.

The Hound, Gabriel’s second-in-command, lowered her voice. “The Hunt stands at your side, Niall. Gabriel has made that clear. We will fight at

your side. We will not let Bananach near you.” Niall came to stand beside Irial and asked the healer,

“He’s as stable as can be expected.” The healer turned to face Niall. “We can make him comfortable while the poison takes him or we can end

“No!” Niall’s abyss-guardians flared to life in shared rage.

“You will save him.”

“Bananach stabbed him with a knife carved of poison .

“Shut up, Irial,” Niall said, but he didn’t pull his hand away.

With his free hand, he motioned for the waiting faeries to approach. “Be careful with

him.” Niall released Irial’s hand so that the faeries could lift the stretcher.

As they left the tattoo shop, Hounds fell into formation around Niall and the injured king, walking in front, flanking them, and following them.

The former Dark King’s eyes closed again; his chest did not appear to rise.

Niall reached out and put a hand on the injured faery’s chest. “Irial!”

“Still here.” Irial didn’t open his eyes, but he smiled a little.

“You’re an ass,” Niall said, but he kept his hand on Irial’s chest so that he could feel both pulse and breath.

Far too many miles away from Huntsdale, Keenan leaned against the damp cave wall. Outside, the desert sky glimmered with stars, but he

he did that he couldn’t go back. Being on his own was unheard of, but despite the challenges, he was certain he was doing the right thing. Of

course, he’d been certain of a lot of things. Surety was not a trait he lacked, but it did not always lead to wise choices.

He closed his eyes and let sleep take him.

“Is this what you freely choose, to risk winter’s chill?” Sunlight flickered under his skin, and he reveled in the hope that this time it would not end, that this time, this girl , was the one he’d been seeking for so long.

trust me?” He paused, and she nodded. “If she refuses me, you will tell the next girl and the next”—he moved closer—“and not until one accepts, will you be free of the cold.”

“I do understand.” She walked over to the hawthorn bush.

She straightened and stepped away from the staff. “I understand, and I want to help you . . . but I can’t. I won’t.

Maybe if I loved you, I could,

but . . . I don’t love you. I’m so sorry, Keenan.” Vines wrapped around her body, became a part of her, and as they stretched toward him, his sunlight faded.

He dropped to his knees . . . and was once more in front of another girl. He’d done this for centuries: asked the same words of girl after girl. He

couldn’t stop, not until he found her . He saw her, though, and he knew that this girl was different.

“Is this what you freely choose, to risk winter’s chill?” he asked her.

trust me?” He held his breath for a moment, feeling the sunlight flare in his body.

“If she refuses me, you will tell the next girl and the next”—

he moved closer—“and not until one accepts, will you be free of the cold.”

someone who stood in the shadows, and then she walked toward the hawthorn bush—and kept walking.

“No! Wait.” He reached down, and his fingers wrapped around the Winter Queen’s staff. The rustling of trees grew almost deafening as he ran

Her shadow fell on the ground in front of her as he stood behind her. “Please, Aislinn. I know you’re the one. . . .” He held out the Winter Queen’s staff—and hoped. For a moment he even believed, but when she turned and took it from his hands, the ice filled

her. Her summer-blue eyes filled with frost, and it crawled over her body.

She stumbled toward him, and he ran from her until he couldn’t breathe in the freezing air from her continuing screams.

He fell to his knees, surrounded by winter.

“Donia, run. Please, run,” he urged. But then he was compelled to ask, “Is this what you freely choose, to risk winter’s chill?”

She stared directly at him. “It’s what I want. It’s what I’ve always wanted.”

trust me?” He paused, hoping she’d say no before it was too late.

“If she refuses me, you will tell the next girl and the next”—

he moved closer—“and not until one accepts, will you be free of the cold.”

“I do understand.” She smiled reassuringly, and then she walked over to the hawthorn bush. The leaves brushed against her arms as she bent

down and reached under it.

She smiled again as her fingers wrapped around the Winter Queen’s staff. It was a plain thing, worn as if countless hands had clenched the

He moved even closer. The rustling of trees grew almost deafening. The brightness from her skin, even her hair, intensified.

She held the Winter Queen’s staff—and the ice did not fill her. Sunlight did.

She breathed his name in a sigh: “Keenan.”

He reached for her, but she stepped away.

Her sunlight grew blinding as she laughed. “But I’ve never loved you, Keenan. How could I? How could anyone ?” He stumbled after her, but she walked away, leaving him, taking the sunlight with her.

Keenan was still reaching for her when he opened his eyes. The cave where he’d been sleeping was filled with steam. Not frost. Not ice. He let

the sunlight inside him flare brighter, trying to chase away the darkness where his fears and hopes played out in twisted dreams.

Not so different from reality.

The faery he’d loved for decades and the queen he’d sought for centuries were both angry with him.

Because I’ve failed them both.

Donia walked aimlessly, taking comfort in the crisp bite in the air. The promise of it made her want to draw it deeply into her lungs. She did,

releasing the cold with each breath, letting the lingering breath of winter race free. Equinox was fast approaching.

Winter was ending, and letting

loose the frost and snow soothed her as few things could of late.

Evan, the rowan-man who headed her guard, fell in step with her. His gray-brown skin and dark green leafy hair made him a shadow in the notyet-dawning day. “Donia? You left without guards.”

“You should’ve woken me at least. There are too many threats. . . .” His words dwindled, and he lifted his bark-clad fingers as if to caress her

Donia glanced away. “Keenan owes me nothing. What we had—”

“He owes you everything,” Evan corrected. “You stood against the last queen and risked all for him.”

“One’s court must come first.” The Winter Queen lifted her shoulder in a small shrug, but Evan undoubtedly knew that she was walking because

she missed Keenan more and more. They didn’t discuss it, and she’d not descended into foolish melancholia. She loved the absent Summer King,

but she simply wasn’t the sort of person to fall apart over heartbreak.

She forced away the thought. Her temper was precisely why she couldn’t settle for only half of Keenan’s attention.

Evan motioned to the other guards he’d brought out with him, and they moved farther away, all but three disappearing into the night at his

command. The three who remained, white-winged Hawthorn Girls, never wandered far from her side if at all possible. Except for when I leave

without telling anyone. Their red eyes glowed like beacons in the poorly lit street, and Donia took a measure of comfort in their presence.

“I would be remiss if I didn’t remind you that it’s too dangerous for you to be out alone,” Evan said.

“And I would be a weak queen if I wasn’t able to handle myself for a few moments alone,” Donia reminded her advisor.

“I’ve never found you weak, even when you weren’t a queen.” He shook his head. “Summer Court might not be powerful enough to injure you, but