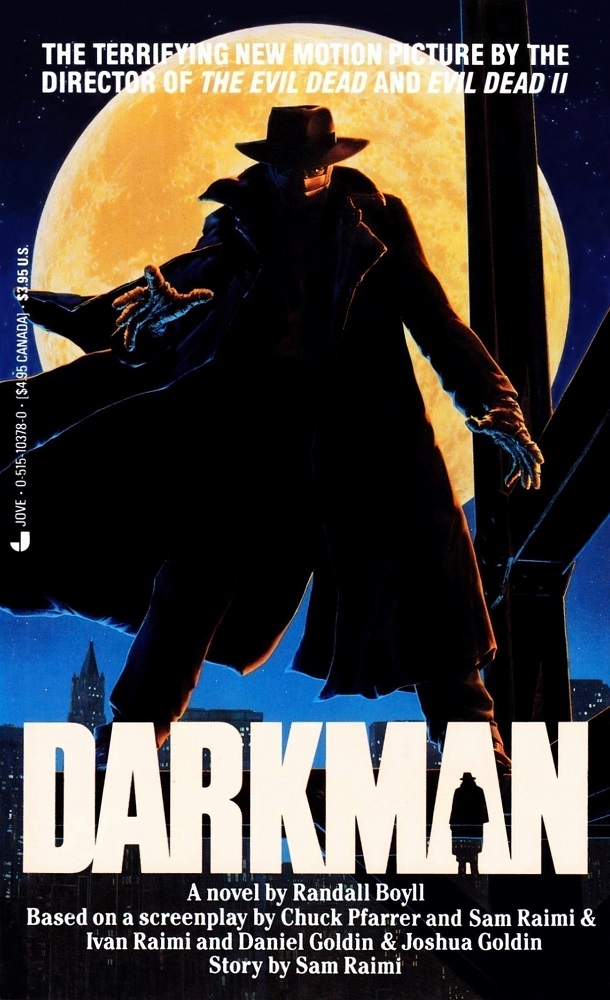 Once, he had a normal life, a beautiful girlfriend, and a brilliant medical career—creating synthetic skin for accident victims . . .

Then, he was a victim himself, brutally attacked by sadistic criminals—his face and body burned beyond recognition . . .

Now, he walks the night, searching for the woman he loves. A man who looks like a monster, he hopes to salvage his scorched flesh . . . and take revenge on those who destroyed his life.

A Jove Book/published by arrangement with MCA Publishing Rights, A Division of MCA INC.

All rights reserved.
Copyright © 1990 by MCA Publishing Rights, a Division of MCA INC.

The name “JOVE” and the “J” logo are trademarks belonging to Jove Publications, Inc.

H
IS NAME WAS
Eddie Black and he didn’t take grief from anybody. He was a big man, Eddie was, a dockworker who had spent twenty years hoisting crates as big as Volkswagens, hauling chains as thick as telephone poles, sweating under a hot Midwestern sun with the putrid stink of the river around him and the savage knowledge that he was real tough burning inside. The fact that he was an asshole did not faze Eddie. The fact that his employees generally considered him to be insane bothered Eddie even less. All he wanted at this moment was to beat the living daylights out of Robert G. Durant, and Mr. Durant was on his way to see Eddie.

Eddie was leaning casually against his car, a brand-new Dodge, waiting, not worrying much. The car was parked inside a huge, empty building on a riverside pier. Weary light bulbs burned overhead in a futile attempt to stave off the dark. Shadows moved in the corners of the buildings while empty crates, slowly rotting, stood silent watch. The orange fireworks of burning cigarette tips flared periodically in the darkest recesses of the warehouse. Eddie nodded to himself. Just wait and see what thirteen husky dockmen could do. That punk, Durant, was in for the surprise of his life.

Something inside the Dodge emitted little electronic beeps. Eddie leaned inside and plucked a remote phone from its holder on the dash. In the years since his retirement he had found himself growing fairly rich, at least as far as dock-workers go. As a younger man, he had worked in this very building, sweated and slaved, sweated and saved. By the time he had hit fifty, the mandatory retirement age, he had a nest egg big enough to put a down payment on this waterfront property and the buildings that stretched forty yards on either side of the pier. Handsome little investment, handsome profits. He had considered buying a river barge but came to his senses in the nick of time and bought the Dodge instead. Barges had a nasty tendency to sink, especially if some angry union boss found out that Eddie hired non-union men and paid them under the table. It was kind of illegal and kind of dangerous, but Eddie had faced danger before. Surely more than that slicked-back greaser named Robert G. Durant.

He put the phone to his ear, feeling smug and important. He loved getting calls on the car phone. He wished he could hang one on his belt. It made people think he was dashingly cool.

A tinny voice squawked at him. Reception was bad on this Thursday. Perhaps the tin wall of the warehouse blocked the radio waves. He made a mental note to park closer to the door next time.

It was his secretary on the line, a scrawny, brainless bimbo who was actually dumb enough to work for two dollars an hour. Not that she had much to do except screen his calls, and she wasn’t even very good at that.

He struggled to get a cigarette out of his shirt pocket while clamping the phone to his collarbone with his chin. The brain-damaged bimbo rattled on and on. He tweezed a crumpled Chesterfield out of the pack and began patting his pockets. The phone felt greasy against his chin, threatening to fall to the cement floor. He tried to elbow it back into place. It was a feat for a contortionist but not for Eddie Black. The phone slipped away and smacked the floor. A piece of plastic popped off and skittered under the car.

“Oh, hell!” he bellowed, dropping down to pick up his favorite toy. On his knees, he stuck it back to his ear. The bimbo was still babbling. “Stop,” Eddie barked. “I dropped the damn phone.”

She kept on talking. Eddie tapped the phone on the floor. Because the plastic had broken off, a small green circuit board was exposed. He stuck his finger on it. Nothing.

“Blah blah,” she said, after a fashion. “And blah and blah and blah.” Eddie realized that he could no longer understand her brainless voice. He hammered the phone against the Dodge’s door, digging neat little chips out of the brand-new paint. Seeing this, he attempted to repair the damage by covering it with the phone.

And still his secretary talked, sounding oddly metallic against the door and its peppering of fresh paint holes. Eddie cranked his head back and screamed to the high ceiling, beseeching God to end his suffering. Mabel droned on.

A figure emerged from the shadows and skirted the car, a beefy man in a sweaty white sleeveless T-shirt. He was all hair and fat. He went by the name of Hank.

Eddie snapped his head around. His eyes were wild and wet. Saliva bubbled at the corners of his lips. “No, Hank, I’m fine. Durant’s on his way to muscle me out of my property and we’ll probably have to kill him. This building is costing me a fortune every minute it stands empty, my phone’s broken, and to top it off, my secretary has turned into a robot. Why shouldn’t I be fine?”

Hank, not the brightest of men, nodded solemnly. “That’s really weird, Mr. Black, because you don’t look all that fine to me.”

Eddie jumped up, intending to shove the now useless phone up Hank’s stupid nose when the rectangle of light that was the open doors behind him went dim. A snazzy blue Lincoln Continental idled into the building, its tires crunching over gravel and debris. Eddie threw the phone into the car and motioned to his men in the shadows, no longer concerned about Hank’s nose. Rumor had it that Durant was one tough hood for a small-timer, a little dope here, a little prostitution there, a few riverfront property owners roughed up and forced to sell. He was about to learn a lesson in diplomacy from Eddie Black.

Eddie’s men formed a line. Each carried a weapon of their choice: six had knives almost as long as machetes, two others had short shovels, one had a crowbar, and the rest had rusty lengths of chain. They leered at the car, whose windows were tinted black.

The car doors popped open and six men got out. Aside from Durant, Eddie had no idea who the others were, though it wasn’t hard to tell what they were here for. Backup for Durant, simple as that. But they were very much outnumbered and were about to lose their weapons.

“Okay,” Eddie said, smiling with a mouthful of yellow teeth. “Against the car, boys. We’re going to do a little searchy-searchy.”

They went obediently to the proper stance: hands flat on the roof, feet spread wide. Eddie waved a hand at two of his biggest workers. They ambled over to Durant’s car and began patting them down. No one protested. A large pile of pistols grew on the floor as Durant’s men were stripped of hardware.

Another nodded. “Bunch of cuties, huh?”

“Put skirts on them and I’d marry one.”

The dockworkers laughed. Eddie breathed a small sigh of relief, amazed to find that he had been mildly worried all along, though he hadn’t been aware of it. He smiled again. Chalk one up to nerves of steel.

“Well, now,” he said, strolling around with his fingers laced behind his back, feeling idiotically like a drill sergeant with a platoon full of recruits, “I believe we have some business to discuss.”

Durant nodded. He was wearing what had to be a six-hundred-dollar suit. The aroma of fine cologne drifted on the air. His hair was slightly greased, combed perfectly in place. Eddie had to hand it to him: He looked like a million bucks. A dope for coming here, but a pretty dope.

Dope Durant looked at Eddie. “Mind if we quit holding this car down?”

“Be my guest,” Eddie said. “Unarmed, you guys are about as scary as Daffy Duck. This shouldn’t take too long.”

They pulled away from the car. Eddie noticed that one of them was limping. No, more than limping. He was hobbling.