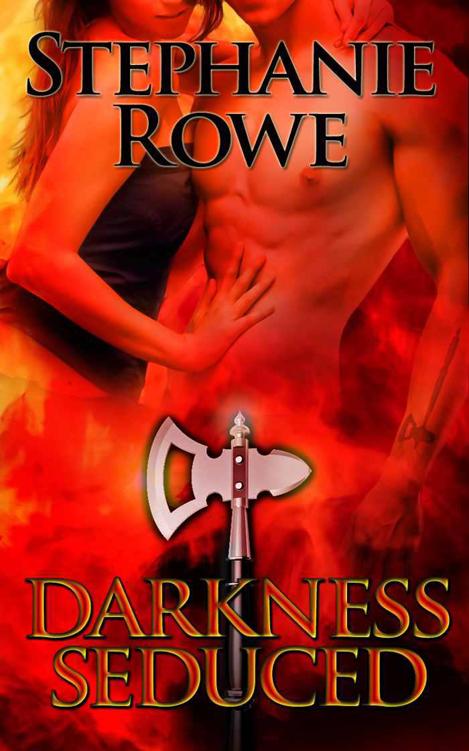 The Order of the Blade

“[D]ark, edgy, sexy … sizzles on the page…sex with soul shattering connections that leave the reader a little breathless!...
Darkness Seduced
delivers tight plot lines, well written, witty and lyrical - Rowe lays down some seriously dark and sexy tracks. There is no doubt that this series will have a cult following. ” ~
Guilty Indulgence Book Club

“
Darkness Seduced
is a fabulous story with all the right elements: a strong sexual attraction, a struggle against that attraction, a tender love, a horrendous battle against unimaginable evil and a fight to save the world. You’ll love Lily and Gideon. This is the kind of story you can’t put down because you’re so anxious to see what happens next.” ~
Jeanne Stone Hunter,
My Book Addiction & More

“Dark paranormal romance with passionate warriors, a cursed destiny, heartbreaking sacrifice and a gripping storyline. What I wouldn’t give to hear the “crack” of a Calydon warrior’s weapon as he protects me...swoon!” ~
Sharon Stogner,
Love Romance Passion Reviews

“A fast-paced plot with strong characters, blazing sexual tension and sprinkled with witty banter,
Darkness Awakened
sucked me in and kept me hooked until the very last page.” ~
Literary Escapism

“Stephanie Rowe does it again!
Darkness Awakened
is an exciting journey full of fast and furious action, sizzling attraction, bad-ass Immortals and strong women with the power of Illusion. Immerse yourself in this fascinating new world and don’t be surprised if you never want to leave!” ~
Book Addict,
When Pen Met Paper Reviews

“Rarely do I find a book that so captivates my attention, that makes me laugh out loud, and cry when things look bad. And the sex, wow! It took my breath away. The author keeps the tension high from page one. The pace kept me on the edge of my seat, and turning the pages. I did not want to put this book down...
[Darkness Awakened]
is a must read.” ~
D. Alexx Miller,
Alexx Mom Cat’s Gateway Book Blog

“Darkness Awakened
unfurled a two thousand year old history and mythology. Full of action and suspense, I couldn’t stop turning the pages!
Darkness Awakened
is... wait for it... dark. But, underneath the darkness is the promise of light. Faith and love that can overcome fate. Don’t miss out on this fabulous adventure!” ~
Tamara Hoffa,
Sizzling Hot Book Reviews

All rights reserved. No part of this publication may be reproduced, disseminated, or transmitted in any form or by any means or for any use, including recording or any information storage and retrieval system, without the prior written consent of the author and/or the artist. The only exception is short excerpts or the cover image in reviews.

Please be a leading force in respecting the right of authors and artists to protect their work. This is a work of fiction. All the names, characters, organizations, places and events portrayed in this novel or on the cover are either products of the author’s or artist’s imagination or are used fictitiously. Any similarity to real persons, living or dead, is purely coincidental and not intended by the author or the artist.

For Jeanne Stone Hunter, a dear friend and a great supporter.

Special thanks to my core team of amazing people, without whom I would never have been able to create this book. Each of you is so important, and your contribution was exactly what I needed. I’m so grateful to all of you! Your emails of support, or yelling at me because I hadn’t sent you more of the book yet, or just your advice on covers, back cover copy and all things needed to whip this book into shape—every last one of them made a difference to me. I appreciate each one of you so much! Special thanks to, Jeanne Hunter, Tamara Hoffa, Rachel Unterman, Sharon Stogner and Jan Leyh, not only for their help, but for their friendship and behind-the-scenes support. Huge thanks also to Anita Nallathamby, Loretta Gilbert, Summer Steelman, Teresa Gabelman, D. Alexx Miller, Holly Collins, Janet Juengling-Snell, Jenn Shanks Pray and Jodi Moore. There are so many people I want to thank, but the people who simply must be called out are Denise Fluhr, Alencia Bates, Rebecca Johnson, Shell Bryce, Denise Whelan, and Ashley Cuesta. Thank you also to the following for all their amazing help: Judi Pflughoeft, Deb Julienne, Julie Simpson, Mary Lynn Ostrum, Maureen Downey and Mariann Medina. You guys are the best! Thanks so much to Pete Davis for such an amazing cover, and for all his hard work on the technical side to make this book come to life. Mom, you’re the best. It means so much that you believe in me. I love you. Special thanks also to my amazing daughter, who I love more than words could ever express. You are my world, sweet girl, in all ways.

Sneak Peek: KISS AT YOUR OWN RISK

The weight in her soul was becoming almost too heavy to bear, and that fact terrified Lily Davenport even more than her current situation did.

That kind of thinking would doom her. It would get her nowhere, and she had to rise above it right now.

Even if it was true.

Fighting exhaustion, struggling against despair, and trying desperately to hold onto the hope that had kept her going for the last two years, Lily leaned back against the cement wall of her cell, not even caring how hard and cold it was. She just needed something to support her head for a minute. Just until she found her way back to the tough, indomitable woman who had survived two years (and counting) of hell at the cruel hands of Nate Tipton, the sociopathic Calydon warrior who’d taken her prisoner when she’d shown up at his house to interview him for her latest research paper.

Calydons were immortal warriors, descended from a crazy, evil male who’d taken one too many doses of demon-tainted water and nearly brought down the world. His legacy was thousands of immortal warriors who were cursed with both a natural instinct to protect innocents, and the horrific destiny of going rogue and destroying the very innocents they were born to keep safe. Each male was chosen by his weapon, and he carried its mark on his forearms where the weapons would wait, ready to be called out battle to do his bidding.

Nate, however, had no such excuses. He wasn’t rogue, and yet somewhere in the tainted recesses of his mind, he’d lost the need to protect innocents. Instead, he thrived on causing pain and death simply because it fit within his plans, whatever they were. After two years at his non-existent mercy, Lily hadn’t figured out what his intentions were, other than to inflict upon her a steady course of abuse designed to break her soul.

Her eyes at a weary half-mast, Lily studied the crusted bagel sitting on the cardboard box that served as her dining room table. That was all the food she had left. One silly piece of dried out bread that she once would have tossed into the garbage without a thought. Today it was an agonizingly tempting feast that was making her mouth water.

Should she try to conserve it a little longer, or eat?

Oh, who was she kidding? She had to eat, or else she’d disintegrate into a pathetic ball on the floor and be unable to save herself when someone finally opened the locked door of her cell.

“Okay, Lily. Up you go.” Lily wrapped her hand around the frame of the metal cot that had cushioned her for so many nightmare-laden nights. With a groan, she pulled herself to her feet. Her legs were trembling, aching with exhaustion, making her almost want to laugh.

If only the world could see her now. The internationally renowned Calydon expert, celebrated around the globe while she delivered shocking information about the reclusive immortal warriors, violent males who lived and died by their blades. How far she had fallen from the serious and staid professor who had stared down hundreds of annoyed Calydons in her lifetime, refusing to be cowed. Today, she could barely manage to hobble across the floor to bask in the delight of eating a stale bagel.

Honest to God, she felt a little defeated right now.

Dammit, no. She couldn’t afford to think like that. Wearily, Lily rubbed her hand over her eyes, willing away the exhaustion. She’d survived this long. Why not try to make it another day? You know, because she’d invested so much time and effort in staying alive and all. It would be a shame to waste it, right?

She almost laughed. God, the things she said to herself to try to stay sane.

“Okay, Lily,” she said aloud, trying to break the debilitating silence that had been closing down on her with increasing intensity. “How about a lovely candlelit dinner just for one?”

Lily pulled her shoulders back and walked across the dirty floor, her legs shaking with weakness as she fingered one of the fading bruises on her arm. She eased herself down to the floor beside the cardboard box. Sitting beside the bagel was a tin can of water. Even though the bagels were stale, at least the water was fresh, or as fresh as whatever was coming out of the faucet in the crumbling cement wall. She preferred to think of the water’s orange tint as a rose-wine color, as opposed to something more unpalatable and probably more accurate.

Nate thoughtfully left Lily eight bagels to gnaw on while he gallivanted about the Pacific Northwest murdering more people. He thought it was hilarious and ironic to leave her with bread and water each time he went out on a mission.

She? Not nearly as much.

Nate had been due back after one day, and now it was day eight, and there was still no sign of him. Good, because it had given her a chance to recover from his latest assault. Good, because it made her hope he’d finally been killed. Bad, because it left her locked in a basement waiting for his brutally terrifying partner to come and get her. As always, he took all his guards with him when he went out on his killing spree, so there was no one left in the house to make sure she didn’t die of starvation. If Nate was dead, his partner was the only one who would be coming for her.