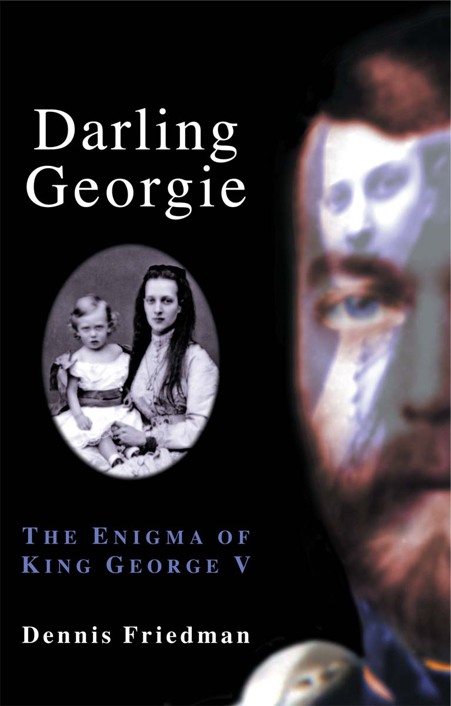 An widely fascinating delve into the Windsors … compelling’
– Anne Edwards, author of
Matriarch

Acclaim for
Ladies of the Bedchamber

Ladies of the Bedchamber’.
– Edwina Currie,
New Statesman
Books of the Year, 2003

A very good read, full of odd nuggets of fascinating information’
–
What’s On In London

Acclaim for
An Unsolicited Gift

‘Has kicked up a ruckus in Britain’–
Time
magazine

‘Fascinating … maybe you are thinking: “Prince Charles – this explains everything!”’ –
The Australian

Acclaim for
The Lonely Hearts Club

D
ENNIS
F
RIEDMAN,
psychiatrist and author of
Inheritance: A Psychological History of the Royal Family,
turns his acute gaze on our present Queen’s grandfather, King George V (1865–1936), to take a closer look at the man behind the monarch. Taking as his starting point the widely held belief that the personality and behaviour of parents and grandparents have a powerful influence on the children and grandchildren – and even great-grandchildren – Dr Friedman’s insightful biography pursuasively argues that the psychologically damaging upbringing to which George was subjected profoundly affected his later life and that the effects of this are still evident in today’s Royal Family.

A suffocating relationship with his mother, Princess Alexandra, compounded by the absence and neglect of his father, caused him to suffer extreme separation anxiety as a child, which was reinforced by his being sent away to boarding school at the age of eleven and then into the Navy. The author examines the effects of this rigid and traditional royal upbringing on his sexual development, on his marriage to Princess May of Teck (later Queen Mary) and on his subsequent years on the throne.

DENNIS FRIEDMAN is a psychiatrist and author of innovative studies on phobias, sexual problems and other psychological disorders. He is also the author of acclaimed books such as
Inheritance: A Psychological History of the Royal Family; Ladies of the Bedchamber: The Role of the Royal Mistress;
and
An Unsolicited Gift: Why We Do What We Do.
He is a Fellow of the Royal Society of Psychiatrists, has worked at St Bartholomew’s Hospital, London, and was Medical Director of the Charter Clinic, London.

M
UCH HAS BEEN
written about the political and social background to the reign of King George V It was not my intention when researching this book to reproduce biographical material already well known to social historians and their readers but to concentrate as far as possible on coming to some understanding of King George the man. Some of those to whom I mentioned the project objected to it on the grounds that what little was known (to them) of the King suggested that he was dull and uninteresting – and why had I not chosen to write about some more charismatic monarch?To my surprise, the more I read about King George V the more familiar he seemed to me to be. I felt that I knew him. I recognized his mannerisms, his style, his hopes and aspirations for himself and his family, his morality and his view of the world, in the adults with whom I had grown up. He ceased to be a stranger to me and metamorphosed into my old headmaster – whose views on discipline and good behaviour (respect for elders) were firmly expressed every morning in assembly – and reminded me of my father. His was a world with which I was familiar. From then on I had only to think of my childhood to understand and empathize with the views of the Sailor King. That he was a ‘product of his time’ confirms rather than belittles all that he stood for.

I am grateful to my publisher Peter Owen who suggested the work to me and to the librarians at the London Library and the British Library who were unstinting in their professional help. Among the many books consulted for the historical background I am particularly indebted to, among others, Sir Harold Nicolson for his official biography of King George V, Kenneth Rose for
King George V,
Dennis Judd for
George V,
John Gore for the official biography of King George V which was commissioned by
Queen Mary soon after her husband’s death, James Pope-Hennessy’s
Queen Mary
and Georgina Battiscombe’s
Queen Alexandra.
The official biographers provided access to letters and diary entries that would otherwise be unavailable to an ‘unofficial’ biographer. I am grateful to my wife Rosemary for her overall supervision of the project and for her final editing.

Introduction: The Man Behind the Monarch

1 They are such ill bred, ill trained children, I don’t fancy them at all

3 Inclined to be lazy and silly this week

4 None of us could speak, we were all crying so much

5 Rum, buggery and the lash

7 One feels capable of greater things

8 Killing animals and sticking in stamps

9 The Queen has gladly given her consent

12 George says he isn’t ready yet to reign

14 I know what’s best for my children

18 If any question why we died, tell them that our fathers lied

20 And it all goes into the laundry, but it never comes out in the wash

The infant Prince George photographed in 1867

Prince Edward and Princess Alexandra with their baby son Prince George and his older brother Prince Eddy, the Duke of Clarence, 1867

Prince George with his brother Prince Eddy, Duke of Clarence, learning to tie knots on the training ship HMS
Britannia

The Princes Eddy (left) and George while in the Navy

Prince George and Princess May of Teck, taken on their wedding day, 6 July 1893

King George and Queen Mary during a shooting party at Sandringham, c. 1934

King George making the first ever Christmas broadcast in 1934

King George’s last journey; his subjects pay their respects at Littleport, near Ely, as the royal train bearing the late King’s body passes by on its way from Sandringham to London, January 1936

• INTRODUCTION •
The Man Behind the Monarch

P
RINCE
G
EORGE
F
REDERICK
Ernest Albert, born 3 June 1865, was the second son of Princess Alexandra and Prince Edward and the grandson of Queen Victoria. Had greatness not been thrust upon him by the tragic death of his older brother, Prince Albert (Eddy), at the age of twenty-eight, King George V, a much loved monarch believed by many of his subjects to have been appointed by God, would not have acceded to the throne.

Prince George’s mother, the society beauty and fashionplate Alexandra, Princess of Wales, held a place in the public affection similar to that of Princess Diana who, more than a century later, was to be granted the same title. Unlike Princess Diana, however, Princess Alexandra was not pursued by the press in order to satisfy the insatiable demands of the public, and her private life remained her own. While Princess Diana turned to those victimized by society to fulfil her needs, Princess Alexandra looked to her two sons to compensate her for the love that her husband, the philandering Prince Edward, was unable to give her. Her younger son, Prince George, was her blue-eyed ‘Georgie dearest’ and she was his ‘Motherdear’. She remained so until her death in 1925, when King George was fifty-eight.

The stifling demands of his smothering mother, and the lacuna left by the frequent absences of his father, were profoundly to influence the life of King George V of the House of Saxe-Coburg-Gotha (later Windsor). Despite the fact that his Empire ‘on which the sun never set’ encompassed a quarter of the world’s surface – an area greater than that ruled over by any other British monarch before or since – he remained a remote figure and the very model of a national patriarch, known intimately only to a privileged few.

Five foot seven inches tall, spare, kindly-eyed, rosy-cheeked, neatly bearded and inadequately educated, King George V was a man of few social graces, mediocre intellect (his artistic aspirations rose no higher than his favourite musical
Rose Marie)
and few words. His image is captured in formal portraits, dressed in naval uniform, in the field with a cocked gun in his hands or by the side of the only other woman in his life, the firmly corseted, statuesque, bejewelled, coifed and toqued Queen Mary (Princess May of Teck), the intended bride of his deceased brother Eddy. Always immaculately dressed (when not in uniform) with a white gardenia in his buttonhole, and having used the same collar-stud and hairbrushes for half a century, his creed, according to Edward VIII, the oldest of his six children, was a belief ‘in God, in the invincibility of the Royal Navy, and the essential rightness of whatever was British’. While revered by many, and the epitome of ‘British’ virtues such as courage, dignity, honesty, common sense and devotion to duty, the pious King is usually remembered as an uninspiring monarch, a pale footnote to history, or for his acid comments such as on going abroad, ‘I’ve been there and I don’t like it,’ and his apocryphal last words ‘Bugger Bognor’.

Semblance by Logan Patricks
Scorpion Shards by Neal Shusterman
Grace by Linn Ullmann
By the Time You Read This by Giles Blunt
A Seacat's Love (Oceanan Trilogy Book 1) by Kong, Jessica
Exposed by S Anders
The Rule of Luck by Catherine Cerveny
Send for the Saint by Leslie Charteris, Peter Bloxsom
Daughter of Xanadu by Dori Jones Yang
Things We Know by Heart by Jessi Kirby