Read Daughter of the Regiment Online

Daughter of the Regiment 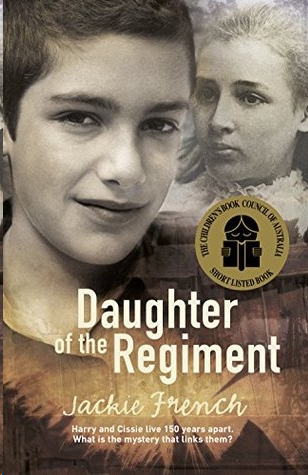 Chapter One: The Hole in the Chookshed

Chapter Four: Trying to Make Sense of It

Chapter Five: The Hole in Time

Chapter Six: What Happens Next?

chapter one
The Hole in the Chookshed

The chookhouse smelt of fresh droppings and laying mash and the slightly musty scent of feathers. The chookhouse always smelt, thought Harry. After it rained it smelt worse. When Dad had laid down fresh hay it smelt less; but it always smelt.

It wasn’t a bad smell though, decided Harry, as he bent to collect the eggs. Sort of sweet, sort of … chooky.

The hens peered in the door behind him, hoping he’d brought down scraps. Chooks smelt sort of friendly, as long as the stink wasn’t too strong.

‘Shoo,’ he said to a particularly persistent hen. That was Smokin’ Joe, the old Isabrown. Smokin’ Joe must be getting on for six years old, calculated Harry.

Dad had bought the Isabrown chickens the year the bushfires burnt Blaine’s Gully. They’d thought Smokin’ Joe was going to be a rooster. She’d even crowed a few times, the sort of strangled crow roosters make before they’ve learnt how to do it properly. But then she’d laid an egg.

Smokin’ Joe pecked at Harry’s feet, then looked up expectantly.

‘No, I haven’t brought you anything you dopey chook,’ declared Harry. ‘I’m just collecting the eggs. Mum already brought the scrap bucket down this morning. Remember?’

Smokin’ Joe paid no attention. She crouched on the dusty floor.

‘Do you want to jump up and lay an egg?’ asked Harry. ‘Is that what’s wrong?’ He stepped back from the laying boxes, the old ice-cream container full of eggs in his hand. ‘Up you go then.’

It was silly to talk to chooks, but Harry reckoned everyone probably did it. Just not when there was anyone around to hear. ‘I’m going to miss you if I have to leave next year Smokin’ Joe. Will you miss me?’

Smokin Joe’s tiny black eyes gazed at him. She fluttered up into the old wooden fruit crate lined with hay that served as a laying box.

It’d be a brown egg, thought Harry. Isabrown chooks always laid brown eggs, brown as your knees in summer, just like Leghorns laid white ones and Australorps’ eggs looked like they’d been dipped in milk with just a little chocolate added …

‘Clurrrk,’ said Smokin’ Joe as she settled down.

In the next box old Sunset fluffed herself more firmly over her eggs. Sunset was an Araucana and laid blue eggs—tiny ones like they were made of painted china, not quite real. Everyone at school stared when Harry brought a blue hard-boiled egg for lunch.

Sunset’s chickens would be half Araucana like Sunset, and half Australorp like Arnold Shwarzenfeather, the rooster. With a bit of luck Sunset’s chickens might lay blue eggs like their mother, but really big ones, like Australorps. Sunset had been sitting for nearly two weeks now.

Smokin’ Joe wriggled impatiently on the nest. Chooks didn’t like anyone watching them lay.

There was a light in the corner of the chookhouse, just below the perches. It pierced the gloom like a bit of sun had wandered in by mistake.

Harry stared at it. There must be a hole in the corrugated iron, he thought. A new hole with a sunbeam glancing through. Dad had made the chookhouse with the rusty old iron from the hay shed roof, so it was always getting holes.

Harry bent down under the perches. The light was incredibly bright in the dimness of the chookhouse. Surely the hole must be pretty large to let in so much light …

Harry looked up at the roof. If there was a really big hole up there the rain would splash in and the chooks might get wet. Of course, their feathers kept them warm, but they still didn’t like to get wet.

The roof seemed okay. Harry looked at it more closely. No, there definitely wasn’t a hole in the roof.

Harry ran his fingers over the walls. No holes there, either.

The light must be coming from somewhere. Not the door. It was at the wrong angle for the door. Harry peered at the light.

It wasn’t really like a sunbeam at all. Sunbeams were long and slanting. This bit of light was round, like a hole on your jumper when the moths had been at it. It just sort of hung there, like it was a part of the dimness that someone had polished till it was bright. Almost as if it was solid.

He was being silly. Of course it wasn’t solid …

Harry put his fingers up to touch it. See, he told himself. Your fingers pass right through.

Harry stopped. His fingers had disappeared.

Harry pulled his fingers back towards him. They seemed alright, solid and slightly grubby. Maybe he had just imagined …

Slowly, very slowly, Harry put his fingers back towards the light. His fingers shone as they neared it, went through it and …

And immediately they vanished.

Harry pulled his fingers back again, but slowly this time, watching them reappear millimetre by millimetre. He hadn’t imagined it. When he put his fingers into the light they vanished, and when they came out of the light he could see them again.

Maybe the light was a whatsit ray, just like in that movie … and everything it touched turned invisible.

Except his fingers weren’t invisible. They were still there. They only vanished when they were in the light.

What was the light?

Harry looked at it closely. It was just light, that’s all. Just …

Except it wasn’t. It wasn’t just light. The closer you got to it, the more you saw it was colour as well as light. Lots of colours, like a rainbow squeezed into the end of a plastic bag and all scrunched together. A bit like a TV, thought Harry, shining in the darkness from a distant room. Without thinking Harry put his eyes up against the light.

What …! It was impossible. It couldn’t be real …

The light wasn’t light. Or rather it wasn’t
just
light.

The light was a window, a tiny window onto …

What? thought Harry, as he peered into the hole. A window onto what?

There were trees through the hole, up on the hills above the creek flats. Not special trees, not magic trees. Not the sort of trees you’d see in another universe, perhaps. Just ordinary trees: manna gums and peppermints and a few red gums just like there were here, above the casuarinas along the creek.

The creek was like the one outside, except this other one had white-trunked gums along it instead of casuarinas, and there were waterlilies like splashes of white paint nudging at the boulders. It looked deeper, with soft, high grassy banks, and it was flowing more strongly. The water was clearer, too, so clear the clouds floated on the water like they were waterlilies.

Water like that would taste sweet, thought Harry. It’d feel like ice-cream on your skin when you swam in it.

The sky was blue, but a different colour blue to the blue outside the chookhouse. It was a deep midsummer blue, and high like a blown-up balloon so you’d think it would collapse if you pricked it. The sky today was cloudy, Harry remembered. A milky sort of blue.

There was nothing else. No animals. No people. No houses or aliens, or spaceships or cars. The trees rustled, a currawong called in the distance, but Harry couldn’t tell if the sounds came from the hole or from outside.

Harry took his eyes away. It was odd. Really odd. A sort of window in the chookhouse. But a window into what?

‘Harry! Have you got the eggs?’

He glanced one last time at the hole and galloped over the flat and up the path to the house. The old oaks squatted above him, as still in the heat as a chook on her nest. The giant agapanthus blooms stood like round blue soldiers of the guard along the path.

‘In here. I wish whoever finished the last of the toilet paper would get the next roll out. I remember your gran saying that if she had a penny for every roll of toilet paper she’d had to … just put the eggs on the table. I’ll sort them out later.’

‘Mum, there’s something funny in the chookshed.’

His mother’s face appeared around the bathroom door. ‘Not that goanna again? If it takes one more egg I’m going to turn the hose on it.’

His mother’s face disappeared again. ‘I’m not surprised. That tin leaked like a sieve when it was up on the shed roof. Tell your dad at dinner time.’

‘Oh blast it. There’s the phone, and I wanted to get the accounts finished before dinner. It’ll probably be your Aunt Gretchen wanting to tell me all about … what the … forget I said that word, Harry, you didn’t hear it, now I’ve knocked the blessed fern out of its hanger. Get the phone will you, love? I’ll be there as soon as I’ve put the poor thing back … oh look at all the mess …’

‘Mmmm?’ Dad looked up from his gravy. Dad was fond of gravy. He’d eat a pig and never notice its feet, Mum said, as long as it had gravy. ‘Pass the potatoes will you, son? How was school? By the way, I meant to ask you, have you decided about boarding school yet?’

Dad’s eyes sort of focused, as though his son was a farmer with 2000 prime steers to sell, and he was wondering how to get the commission. Dad was the stock and station agent up in town. You always knew when Dad got that really friendly tone in his voice that he was trying to sell you something, thought Harry.

‘I don’t want to pressure you Harry,’ Dad said earnestly. ‘It’s your choice whether you go or not. I’ve seen too many kids hate boarding school because they were forced to go. But just think of all the kids you’ll meet up there—kids from all sorts of places—’

‘Not to mention all the subjects you can do,’ said Mum. ‘Chinese, Japanese, photography … you can’t even take a language at all at Bradley’s Bluff. Your cousin Elspeth is taking Indonesian now. It’s her favourite subject, and her mother says …’

Whacko for Elspeth, thought Harry. He poked his silver beet over to the edge of his plate and watched the thin green water trickle out onto the mashed potatoes.

Dad was silent for a moment. ‘If you’re not going to take up the place we really need to let the school know,’ he said finally.

‘I’m thinking about it,’ said Harry shortly. ‘Dad I saw something funny this afternoon. I mean really off. It’s this hole in the chookshed.’

His father shrugged, and went back to his potatoes, carefully covering them with gravy before transferring them to his mouth. ‘Well, there’s not much I can do about it. I’m flat out at work at the moment. I’ve got three sales on next week and Stan’ll be cutting the lucerne if the weather holds.’ Dad and Grandad employed Stan Lennock to run their two farms. ‘I haven’t time to put a new roof on now and Stan certainly doesn’t. A few holes won’t hurt the chooks.’