Read Dawn of Wolves (The Kingdom of Mercia) Online

Dawn of Wolves (The Kingdom of Mercia) 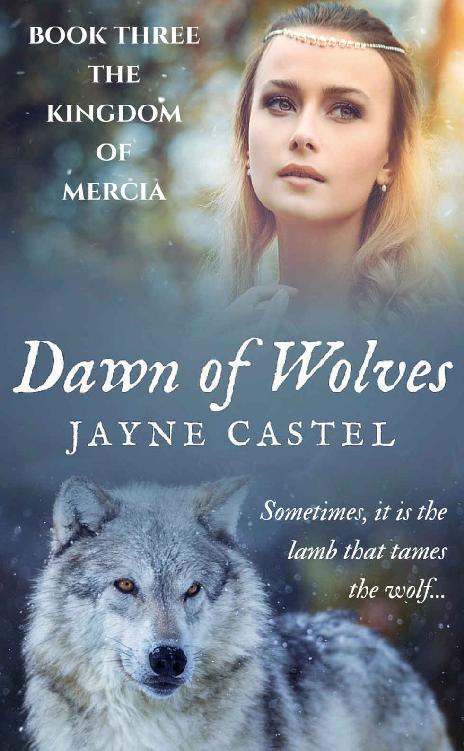 The Kingdom of the East Angles series

Dark Under the Cover of Night (Book One)

The Kingdom of the East Angles: The Complete Series

The Kingdom of Mercia series

The Breaking Dawn (Book One)

This is a work of fiction. Names, characters, organizations, places, events, and incidents are either products of the author’s imagination or are used fictitiously. Any resemblance to actual persons, living or dead, or actual events is purely coincidental.

No part of this work may be reproduced, or stored in a retrieval system, or transmitted in any form or by any means, electronic, mechanical, photocopying, recording, or otherwise, without written permission of the publisher.

Amazon, the Amazon logo, Kindle Scout, and Kindle Press are trademarks of
Amazon.com
, Inc., or its affiliates.

For grandad—your love for East Anglia inspired me to write these books.

Historical background for
Dawn of Wolves

Historical background for
Dawn of Wolves

In the seventh century, England was not as we know it today. The Anglo-Saxon period lasted from the departure of the Romans, from around 430 AD, to the Norman invasion, in 1066 AD. My novels focus on the period in between the departure of the Romans, and the first Viking invasion in 793 AD—a 300 year period in which Anglo-Saxon culture flourished. The British Isles were named Britannia (a legacy of the Roman colonization) and split into rival kingdoms. For the purposes of this novel, we focus on two of them: Mercia and Kent.

heah-setl:
high seat (later called a “dais”) for the king and queen

Nithhogg:
a fire-breathing dragon that lived in the underworld

Thrimilce:
May (month) (literally “the month of three milkings,” when livestock were often so well fed on fresh spring grass that they could be milked three times a day)

Woden:
the Anglo-Saxon father of the gods (Odin in Viking mythology)

Love will find a way through paths where wolves fear to prey.

Speak of the wolf and you will see its teeth.

Cantwareburh, the Kingdom of the Kentish, Britannia

Ermenilda watched the snow fall. The delicate flakes fluttered down from a darkening sky like apple blossoms caught by a gust of wind. An ermine crust covered the garden’s gravel paths and frosted the plants that had not died away over the winter.

Damp, gelid air stung Ermenilda’s throat, and her fingers were numb, but still she lingered. As always, she was reluctant to leave her refuge. She circuited the path between the high hawthorn hedge and the frosted sage and rosemary, her boots sinking deep into the snow.

Despite the cold, she had ventured out here to escape the oppressive atmosphere of the king’s hall, which was full of greasy smoke and the reek of stale sweat. Outdoors, the air tasted like freshly drawn cider. Better yet, she did not have to listen to the prattle of women, the booming voices of men, and the squeals of children bored with being cooped up indoors.

Ermenilda loved this secret spot; it was her sanctuary. Her father had told her the Romans built this garden, and that it was a crumbling ruin when he had first come to live in Cantwareburh. Since then, his wife had poured her energy into restoring the secluded space. As soon as she could walk, Ermenilda accompanied her mother to the garden, as did her younger sister. Even over the winter, the three women spent most afternoons out here—the garden was a passion they all shared.

At the far end of the garden, Ermenilda paused. There, she admired the snowy branches of her mother’s prized quince tree. As she gazed upon it, a veil of melancholy settled over her.

Soon, I will have to leave this place.

Nervousness fluttered just under her ribs, replacing the sadness, before giving way to a lingering excitement.

Ermenilda had heard that Eastry Abbey also had a magnificent garden. Once settled there, she would no longer miss this one. She was hoping that her father would let her take her vows at Eastry in the spring. He had been noncommittal whenever she raised the idea, but she had time to convince him yet.

Dusk closed in, but still Ermenilda lingered. It was only when a shadowy figure emerged from the arbor, at the opposite end of the garden, that she realized she had been missed. Cloaked head to foot in fur, her younger sister hurried down the path toward her, her face rigid with purpose.

“I was beginning to think you had frozen to death out here! Come inside, Erme!”

Ermenilda sighed, irritated that her sister had shattered her solitude.

“I’ll come in soon enough,” she replied, waving Eorcengota away.

“You must come now,” her sister insisted, her eyes shining. A mixture of cold and excitement had flushed Eorcengota’s impish face. “We have guests this evening, and Fæder insists we join them for supper!”

Ermenilda’s irritation grew. She hated it when strangers arrived at her father’s hall—especially if they were ealdormen, for she did not like how some of them leered at her.

“Yes, an exiled prince from Mercia,” Eorcengota enthused, virtually hopping up and down on the spot with eagerness. “He and his men are stabling their horses as we speak. Fæder wants us indoors to greet him!”

A knot of apprehension formed in Ermenilda’s belly. Unlike her silly goose of a sister, she did not like the sound of this visitor. Her father would be delighted of course; they rarely hosted royalty from Britannia’s other kingdoms. The Kingdom of the Kentish often appeared of little importance in the wars, politics, and intrigue among the others who ruled.