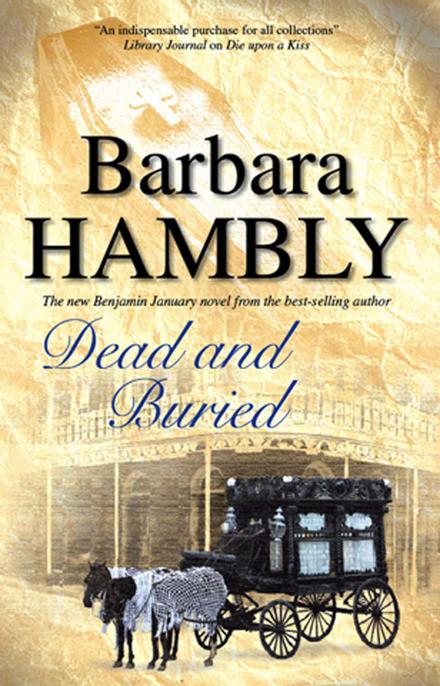 A FREE MAN OF COLOR

SOLD DOWN THE RIVER

DIE UPON A KISS

DAYS OF THE DEAD 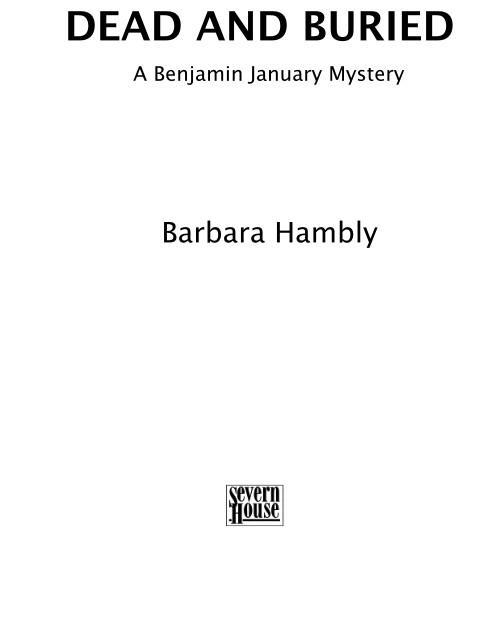 in Great Britain and in the USA by

T
he rule was, you played them into the cemetery with sadness, but you left grief at the side of the grave.

You’d remember them – brother or son, or just a man whose flute could follow a
chaine anglaise
. . . But the pain would go into the tomb with the coffin, dead and buried. When the funeral procession emerged from the gates of the St Louis Cemetery and crossed Rue des Ramparts to make its way back to the dead man’s home, the music would be the strut of joy and pride, a gesture of happy defiance waved under Death’s pinched nose.

You might have snatched our friend from out of our midst, but all you got was dirt and bones. God’s got his soul, and we have the memory of his laugh
.

Benjamin January had not been an intimate friend of Rameses Ramilles, but he had known the man, literally, all of Ramilles’s life. Rameses’s mother lived next door to the house that St-Denis Janvier had bought for Benjamin’s mother when he had purchased her – a beautiful mulatto house-slave of twenty-five – from a sugar-planter with whom he did business. One of January’s earliest memories in that pink-washed cottage had been his mother going to help Nannette Ramilles with the birth of her first child. She’d taken along January’s younger sister Olympe to help out, though the girl was only six, and when he himself had visited – remembering to go in by way of the back yard, and thence through the French door into Albert Ramilles’s bedroom, as his mother said was proper for
gens du couleur libre
now they lived in New Orleans – he hadn’t been allowed to hold the squirmy bundle that was his family’s newest neighbor. ‘You’ll just drop him,’ Olympe had said smugly, and Benjamin, delivering her the sharp kick in the shin that would have been perfectly acceptable a few months before when they were both just members of the hogmeat gang on Bellefleur Plantation, had been sent home with a slap.

The summer of 1836 had been a hard one. Though it was now the seventh of October, heat still lay heavy over New Orleans, and as the hearse with its four black horses drew up outside the gates of the old cemetery, the stench of the tombs made Rameses’s wife Liselle gag. Yesterday’s rains – they sailed in from the Gulf every afternoon with clockwork regularity – had left puddles among the whitewashed brick tombs, and where this morning’s shortening shadows lay, mosquitoes whined like ash whirled up in smoke.

‘It’s all very well for M’sieu Quennell to provide gloves and rings and armbands,’ murmured Hannibal Sefton, as Rameses’s professional colleagues held their instruments aside to let the pall-bearers pass. ‘Not to speak of plumes on the coffin as well as on the horses, which I’m sure is a great comfort to poor Liselle . . .’

‘To her mother, it is.’ January’s voice was dry as he adjusted the tuning of his Spanish guitar. He had never liked Rameses’s mother-in-law.

‘Maybe someone could suggest something extra for the musicians – Medico della Pesta masks, perhaps? Those long-nosed Venetian things? One can stuff an astonishing amount of vinegar-soaked cotton in the probosci—’

‘Would you really want to see what Liselle’s mother would come up with, trying to out-do Rameses’s mother in that department?’

Hannibal shuddered. ‘A palpable hit,
amicus meus
,’ he conceded. ‘The competition for Most Lugubrious Veil is already pretty frightening.’ He nodded in the direction of Nannette Ramilles and her lifetime rival Denise Glasson, each swathed in enough black tulle to suffocate an army. ‘Two bits says Madame Glasson faints first.’

‘And take her eyes off her son?’ January nodded back toward the hearse, where Felix Glasson was loudly objecting to the insistence of Beauvais Quennell, the undertaker, that he bear the center of the coffin rather than one of its forward corners. ‘Never.’

‘M’ bes’ frien’, damn you!’ the five-foot-two Glasson was crying, in an agony of inebriated grief. ‘Bes’ frien’ in th’ world! You jus’ want to hide me – put me where nobody can see me—!’

‘Would that we might.’ January glanced in the direction of Madame Glasson, who chose that moment to burst into ostentatious sobs on the shoulder of her latest husband.

Beauvais Quennell, who prided himself on the elegance of his funerals, looked about to do the same from sheer vexation. All the other pall-bearers were six-foot tall.

January played a gentle riff, huge hands that could span an octave on the piano fashioning the guitar’s softer voice into a wordless commentary of regret. Hannibal’s violin joined its music to the guitar’s, and they moved into the cemetery, the rest of the musicians taking up the sadness of Vivaldi’s concerto for the lute. The music was hardly perfect, but perfection was not the object at a funeral – unless, of course, you were Beauvais Quennell. Rather, that every man who had played with Rameses at countless Carnival balls, opera performances, subscription dances and private entertainments black and white – on fiddle, cornet, clarionette and guitar – should play one more time, their music bidding farewell to the light notes of his flute.

The Free Colored Militia and Burial Society of the Faubourg Tremé – the ‘back of town’ where the
gens du couleur
libres
lived – gathered to see off its own.

As they paced along the cemetery wall toward the rear section where the tombs of the free colored were relegated, January glanced back along the line of mourners. They filed among the close-crowded tombs like a sable river: the Faubourg Tremé Free Colored Militia and Burial Society was one of the largest of the free colored burial societies in New Orleans. Its balls and parties were among the best attended by the town’s
sang mêlées
: though Rameses and his young wife had lived in a single rented room behind LaForge’s Grocery, everyone in the back of the French Town had known him. The lovely
placées
, whose cottages lined Rue des Ramparts and the streets nearby, had danced to his music a thousand times, first as girls in dancing classes and then at the Blue Ribbon Balls with their wealthy white protectors. The clerks and artisans, many of whom were the offspring of such left-handed matches a generation or two before, had grown up with him, either shaking their heads at his decision to disobey his tailor father and become a musician, or secretly wishing they shared his courage. Even those
libres
who, like January’s mother, had invested in property or slaves and grown wealthy, had had a smile for the young musician when they’d encountered him in the French Town’s narrow streets, and had grieved to hear of the fever that had struck him down.

This same community – as close-knit and snobbish as their white cousins and half-siblings among the pure-blooded Creole French – had welcomed January, when he had returned after sixteen years in Paris, though when he’d been an overgrown boy they’d mocked his African blackness and the fact that his father had been a slave. But he was a part of them, as Rameses had been a part.

Pere Eugenius waited for them beside the handsome brick FTFCMBS tomb: the only white face, other than Hannibal’s, to be seen. Family tombs crowded on all sides. In his years in France January had never quite gotten used to the sight of village churchyards, where the dead were let down into the earth itself. In New Orleans, three spade-strokes would hit water. It didn’t take much to wash a body out of a grave. Some of his eeriest childhood memories were of crouching on the gallery of the kitchen building behind his mother’s house during the Mississippi’s floods, watching long-decayed corpses bob past in the yellow water that flowed through the streets.

Madame Ramilles and Madame Glasson had practically run a race to be the first to stand next to the priest when the coffin arrived at the tomb. January was hard put not to grin when he saw how their knee-length black veils puffed in and out with their panting. Even in grief, people remained what they were . . . Maybe especially in grief. Felix Glasson, he observed, had had his way and carried the right front corner of the coffin, which was lurching like a dinghy in a gale with the mismatched heights and the rum that the young man had imbibed.

January picked out his wife from among the wives and sisters who clustered around the widow: his beautiful, bespectacled Rose. His sisters were there, too – the exquisite Dominique, daughter of his mother’s protector, St-Denis Janvier, and Olympe, his full sister by that African cane-hand of whom his mother never spoke. Their mother was further back in the procession among her own particular cronies of the free colored demi-monde, clothed in the elaborate mourning she’d worn for Janvier and for her subsequent husband, the briefly-tenured Christophe Levesque. As she came into view, Hannibal whispered, ‘Think she’ll manage to never be in the same room as Olympe at the wake? The place will be crammed.’