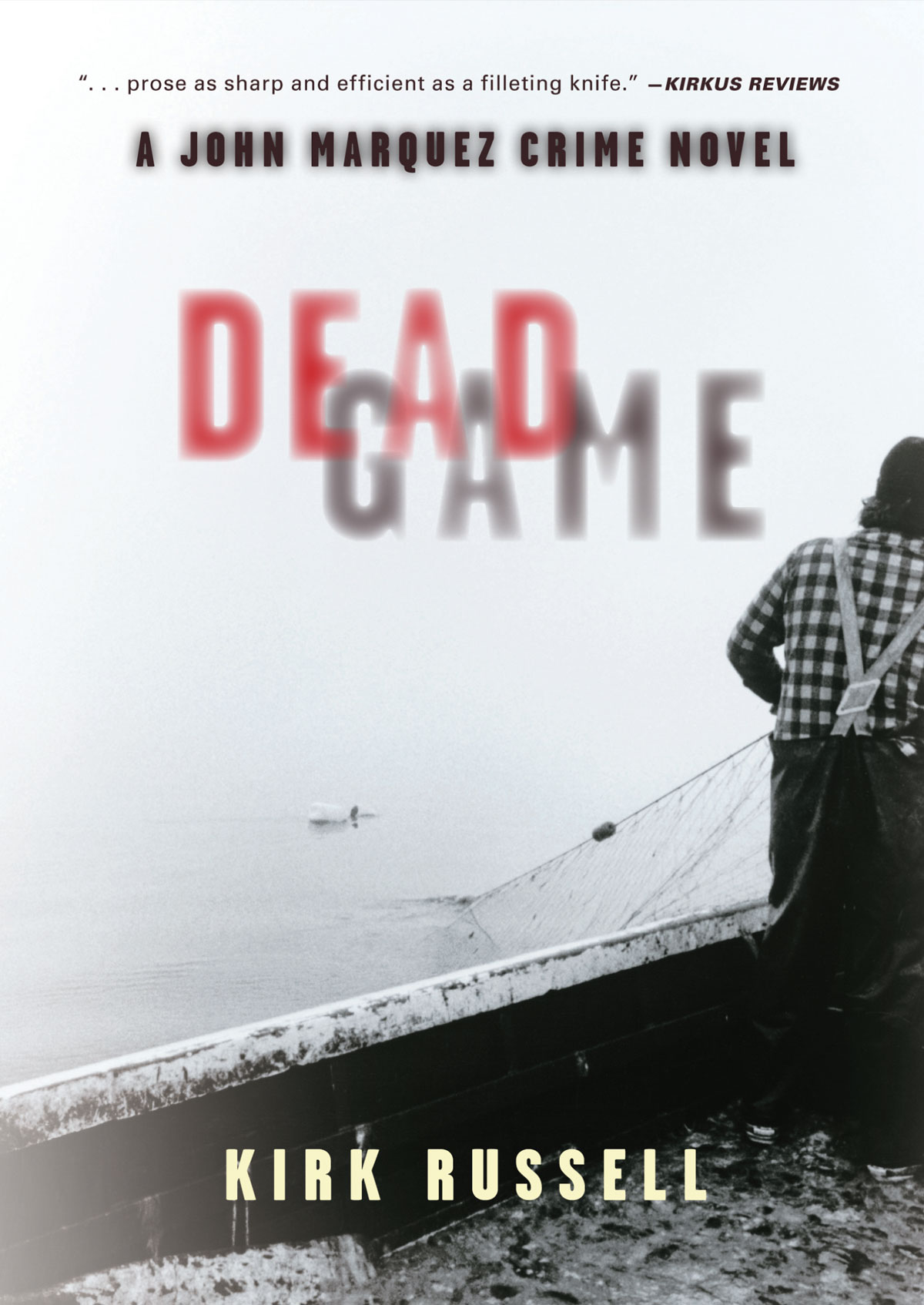 Raburn climbed back up
the muddy bank, shielding his eyes from the headlights as he looked at Marquez. He smiled and scraped mud from his boots. He was happy about what he’d found.

He went to his pickup, started the winch, and Marquez stood near the edge of the levee road looking down at the dark water of the slough as the steel cable tightened and the sturgeon’s head broke the surface. With the pickup’s pale headlights shining from behind him, he could just make out the gray-white shape as it was dragged toward the bank. He heard Raburn calling to him over the pickup engine and winch.

“Is she out of the water yet?”

As the cable pulled the heavy fish from the water, the sturgeon rolled onto its back, and spiny scutes, the armor on the sturgeon’s back, dug into the bank mud. It plowed through the low brush, began climbing, and was every bit as big as Raburn had claimed, probably close to eight feet, as big as any Marquez had seen poached in the delta in the years he’d run California Fish and Game’s undercover team. It was hard to watch but, without turning, he held his left hand out, thumbs-up to signal Raburn that it was on its way up.

The pickup engine revved as Raburn tried to give the winch more power. The sturgeon’s ascent slowed and the winch cable sawed through mud at the edge of the levee road, but the heavy treble hook in its mouth did not pull free and the fish continued an upward slide. When it crested the road, Raburn hurried over. He clapped Marquez on the back.

They worked the fish onto a plastic sheet spread in front of the truck. It gasped. Its tail flopped as Raburn rummaged in his truck. He returned with a knife and a sledgehammer, and handed Marquez the knife.

“Your baby,” he said, “unless you want me to cut them out for you.”

Marquez had made the buy for eleven hundred dollars. He wore a wire and had recorded the haggling they’d done in Isleton before driving out here, and he had shown Raburn, the fish broker, the money but hadn’t paid him yet. They’d made several buys from Raburn, had more than enough to arrest and charge him, yet couldn’t seem to get him to talk about another suspect they were trying to get close to, a Russian immigrant named Nikolai Ludovna, or “Nick,” as Raburn called him.

The traditional way to make caviar was to cut out the ovaries while a sturgeon was still alive. After death, the body’s enzymes altered the chemistry and tainted the taste of caviar made from the roe. But they weren’t going to keep it alive tonight. The fish had suffered enough, hooked and brought here, tied off on the tree for two days, and now pulled alive up the slope.

Raburn smiled, didn’t comment, didn’t want to do anything to mess up the sale. He was a good-sized man, limber and strong, a middle-aged gut on him, but still agile and he swung the sledgehammer easily. One blow wasn’t enough, and each made a flat hard wet sound striking the fish. Marquez watched the fish die, then leaned over her belly and slit her open. He removed the ovaries and rested them on ice in a cooler.

Now they would find out what they had, and he waited for Raburn to reposit ion the f lashlight, then gently squeezed eggs from an ovary as Raburn held the light above him. The eggs were black and slimy and not mature enough for caviar. That had always been the risk with this one. The main sturgeon run in California’s Sacramento/San Joaquin River delta was months away in April, and though sturgeon varied, it was only late November.

“She was already on her way into the delta so I thought when I caught her she was further along,” Raburn said. “Remember, I called you and told you I caught her in the delta.”

Raburn was afraid he’d back out of the deal. Marquez glanced at Raburn then back at the sturgeon. He figured the sturgeon was close to fifty years old, same as himself and Raburn. He’d let Raburn kill the fish and now he had to make this work.

“You connect me to Nick Ludovna and the deal stays the same,” he said.

He watched Raburn pick up the cooler, walk it over to the side of the slough road, then dump the ice along with the ovaries. Raburn pushed an ovary with his boot to get it to roll down the embankment toward the slough and away from any warden who might find this site later. He kicked at the mound of ice.

“Garbage,” he said, as though they’d been cheated.

Raburn was good
at gutting and cleaning. He carved the sturgeon into chunks, which they lifted onto the ice in the pickup bed. They covered the chunks with a tarp, drove slowly back through the fog, and it was almost dawn when Marquez got dropped at his truck.

Later that morning he met with the other two wardens on his undercover team, Carol Shauf and Sean Cairo. Sitting in Shauf’s minivan they listened to the tape of last night’s conversation with Raburn, then drove back out the slough and took photos. In the midafternoon Shauf and Cairo drove back to Sacramento. They’d stay at the safehouse tonight, and Marquez would remain in the delta. He rented a room at Lisa’s Marina and at dusk carried a beer out on the deck and waited. A confidential informant was on her way here to meet him.

She was helping unravel another thread of the poaching ring, how the poached sturgeon roe that became caviar was getting sold. She didn’t have anything new for him tonight, but he hadn’t seen her in a couple of weeks and she was passing through the delta anyway, so it was a chance to touch base. That she was late didn’t bother him. He was tired, and it was nice to stand out here with a beer and take a break from the operation, even if the beer was warm. Long lines of cars like convoys swept past up on the levee road. When his phone rang, he guessed it was Anna.

“I agreed to meet Don without calling you first.”

She sounded like a little girl confessing and not like herself. Marquez set his beer down on the railing cap.

“At the fishing access up the road from the Rio Vista Bridge, and I’m scared. Don wanted to meet me here, but he hasn’t showed up and now these other guys have. It was like a big deal and a favor he’d owe me for. He said he had something he wanted me to hold and give to a friend of his tomorrow, but now he’s forty minutes late and these other guys have pulled in and parked next to my car, even though the whole rest of the lot is empty.”

“No, I got out to walk around and I don’t want to go back to my car because of the way they’re watching me. I’m sorry, I know that sounds crazy.”

“Doesn’t sound crazy. How far are you from them?”

“I’ll drive to you,” he said. “But why don’t you walk up to the levee road and wait for me there?”

The fishing access lot was down by the river, rectangular, bordered on the road side by the levee embankment, on the other by an asphalt path and a row of oak trees. He could picture her car in the middle of the lot.

“Should I just run down to my car and get in fast? Am I making a problem out of nothing?”

Probably, because there was a pretty good chance the two men in the car were there for no reason other than the lot was free, along the river, and it was Friday night, the day after Thanksgiving on a long weekend. There to kick back, drink, smoke, listen to music.

“Not if they scare you. The safest thing is to go up to the road, and I’ll stay on the phone with you. I’m going to walk to the truck now. If we lose connection I’ll call you back. Tell me what you can about the men and their car.”

“They’re like middle-aged white guys, but I can’t see them that well. The car is newish and looks expensive. It’s a black four-door.”

“I don’t know cars, but like one of those airport cars.”

“No, smaller than that, a black four-door, modern looking.”

A late-model black four-door didn’t sound like a couple of guys hanging out at a fishing access, but still, it was no reason to worry, and Anna wasn’t that deep into their operation. Yet it was troubling
because it didn’t make sense that Don August, the suspect she was helping them with, had anything for her to hold for him. He couldn’t see August trusting her to hold something overnight for him. He didn’t know her that well.

A nervous energy started in Marquez. The feeling of relaxing with the beer was gone, but at least the beer would finally be cold when he got back, and he’d buy Anna dinner here after retrieving her. Christmas lights came on around the bar windows as he crossed the marina deck. Through the windows he saw the same three fishermen at the bar, the owner, Lisa, bartending.

“I can’t walk up to the road because I was really stupid. I left the car unlocked and my purse is in there. As long as they can see me on the phone they know I can call 911.”

So she wasn’t that scared. He registered the difference as he got in his truck and thought about her waiting this long to tell him about the purse in the unlocked car.

“It’s going to take me fifteen to twenty minutes with the fog to get there.” When she didn’t answer he repeated, “Anna, walk up to the levee road and wait there. You have a bad feeling about these guys—you can watch from up there.”

He drove up to the road and turned downriver. Anna was bigboned, athletic, high cheekbones, cheeks pocked by acne, brown eyes, nothing demure about her, a river rat who guided boat tours and mountain expeditions for a firm called Adventure USA. They were legit, had been around awhile, and Anna’s face was in their brochure and on their website, an experienced river guide, diver, and climber. The website carried a picture of her on the saddle of a Himalayan mountain. They’d checked her out every way they could, including her credit history, as they chased a rumor about
her kiting checks. From Immigration they’d gotten record of her moving here from Russia with her mother twenty years ago.

She’d climbed some serious peaks and guided trips on Class IV rivers. She’d told him tales of stuff that had happened to her in remote places, in particular because she was a woman. She’d struck him as tough, not easy to intimidate, and he’d never heard her talk about being scared of anything. Now, suddenly, her voice was lighter and louder. She laughed.

“Guess what, I really am a total idiot, they’re leaving. They’re backing out. They’re going to pass me here in a second.”

Marquez heard a car engine idling somewhere near her, then Anna’s startled, “Wait, oh, no,” and a man’s voice calling, “Come here, bitch.”

But she answered the man instead, her words unintelligible to Marquez.

“Get your ass over here before I use this on you.” The man’s voice was abruptly much louder, closer. “Don’t move, don’t make any noise. Drop the fucking phone.”

She screamed. The phone clattered and died. Marquez jumped on the accelerator. He reached for his radio. He was still ten minutes away.