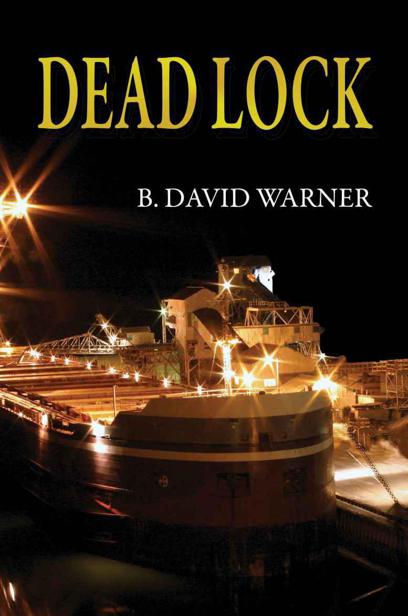 All rights reserved. No part of this book may be reproduced, stored in a retrieval system or transmitted in any form or by any means without the prior written permission of the publishers, except by a reviewer who may quote brief passages in a review to be printed in a newspaper, magazine or journal.

The final approval for this literary material is granted by the author.

Print edition produced in the United States of America

Dead Lock is dedicated to my family: my wife, Marlene, daughters Margi Warner and Andi Hernandez, and my son-in-law John Paul Hernandez.

While Dead Lock is a work of fiction, the plot is based on a fear that was very real during the early days of WWII. If the locks at Sault Ste. Marie had been destroyed, the Allied war effort would have been badly compromised.

I’ve attempted to keep the background as factual as possible. There actually were some 7,300 troops stationed at the Soo in late 1942 and early 1943, armed with anti-aircraft weapons. There were submarine nets and barrage balloons – balloons that sometimes broke loose from their moorings and drifted away to be found miles away.

This kind of accuracy requires a dedication to research. And for information that helped
Dead Lock
come to life I thank a number of people, beginning with Bernie Arbic. His excellent histories,
City of the Rapids
and
Upbound Downbound,
formed the base of my knowledge of the region and its past. I also thank Paul Sabourin who spent many hours showing me locations where actual events took place.

The late Chuck Payment provided extremely helpful input: he worked for the
Soo Evening News
in 1941. Dr. Donald McKinnon, once assigned to Army Intelligence, was at the dedication of the MacArthur Lock, and gave me a valuable glimpse into the happenings of that day, as well as life in the Soo at that time.

To Ralph Kiefer and Heide Borsdorf go thanks for providing the German translation in the chapter on the Enigma.

Thanks to Margaret Chaney and Jean MacLellan for their knowledge of Detroit in the 40s and what it was like to work on the
Detroit Times
newspaper.

Paul Bressler and “David” of Allexperts.com contributed a great deal of advice on fine wine of the time. Paul Sutton lent insight into the anti-aircraft weaponry used at the Soo during WWII.

Finally, thanks go to Eric Treece for his cover photo and to Chris Ivy for the photo of the author.

On October 4, 1942, almost three years into what had by now become known as World War II, the top secret British MI6 branch at Bletchley Park decrypted a German Enigma radio transmission that referenced an attack on the locks at Sault Ste. Marie, Michigan, USA. The transmission indicated the assault would take place the following year during dedication ceremonies for the new MacArthur Lock. The attack was scheduled to wreak maximum damage on both property and the lives of the thousands of people who were expected to be present during the ceremony.

Ninety percent of the iron ore that supplied the Allied war effort passed through these locks by lake freighter, and destroying them would shut down every airplane, tank, ship and munitions plant in the United States.

The message was taken very seriously.

25 days before the dedication of the MacArthur Lock

The night sky had cleared over the tree-lined neighborhood of modest two story homes on Detroit’s east side. The clouds responsible for the puddles on the street and the damp mist sparkling in the grass had drifted eastward and now hung somewhere over southern Ontario, Canada.

Windows were open to this warm humid evening and strains of Kay Kyser’s
They’ll Be Bluebirds Over the White Cliffs of Dover
played somewhere in the distance.

Hundreds of onlookers gathered behind rope barriers installed on either side of a small white house in the middle of the block. People stood side by side, some clutching folded umbrellas in case the rain should return. They waited, their attention focused on the front door of the home where nearly an hour ago a gunman had appeared demanding a ransom for the woman he held captive and giving the police sixty minutes to produce the money along with an automobile he could use to make an exit.

Inside the ropes, uniformed police and officials in street clothes milled about, some pausing to talk in small groups. Four squad cars, fastback 1942 Chevrolets, were parked side by side at the curb. With their noses facing the home they resembled huge black cats poised on their haunches, their yellow eyes casting beams of light against the front of the house, turning its white exterior into lemon icing. The fact that the headlights violated the Office of Civil Defense-ordered blackout didn’t matter. Tonight was different.

A woman’s life was at stake.

The gunman’s eleven o’clock deadline was nearing and he would reappear in minutes, holding his hostage in front of him. He would repeat his demand for a thousand dollars cash and a car. The police had a strict policy against negotiations of this sort and would try to stall the man, whom the first officers on the scene had identified as a mob thug named Frank Valvano. It wouldn’t take long for Valvano to understand he was being conned and all hell would very likely break loose.

Valvano was well known by the Detroit police force as a psychopathic killer who was tolerated by his mob bosses only because of his skill with both gun and knife and his willingness to follow orders without question. Since the events of this evening had blown up in his face, Valvano seemed to have decided that his stock with his bosses had run out. His demands for money and transportation sprung from a desire to escape both authorities and the Detroit mob.

Inside the house with the gunman was a woman named Kate Brennan. A reporter for the
Detroit Times
, she had been writing a series of front page articles exposing the mob as the perpetrators behind a rash of counterfeit gasoline ration stamps. Since early 1942 the government had instituted rationing that limited most Americans to five gallons of gasoline a week. Despite the waves of patriotism on the Home Front the bogus stamps proved widely popular. They netted eleven million dollars a year and the mob, which could always be counted upon to put money ahead of patriotism, was understandably upset by the articles. They had sent Valvano to threaten the woman at the very least, and to kill her if she insisted on continuing the crusade.

Arriving home shortly after nine o’clock, Brennan found Valvano in her living room. She had successfully avoided his grasp and run into her bedroom, where she locked the door. She was on the bedroom telephone with the police when Valvano broke down the door and smashed the phone against the wall.

But it was too late; the police were on the way.

A lone police rifleman stood on the lawn across the street from the house, his M1C sniper rifle resting against the damp trunk of a twenty-foot elm. Oblivious to both the people and the occasional drop of moisture from the leaves above him, his attention was riveted on the front door of the house. The rifleman’s name was Ben Hatfield and this sort of operation was not new to him. He had been a sniper in WW1, serving in the Fourth U.S. Marine Brigade under Colonel James Harbord. He took part in the famous 1918 Battle of Belleau Wood where he killed a number of the enemy, some as far away as half a mile. Now in his late fifties, Hatfield, who rode a desk and shuffled papers downtown, had to be content with sporadic assignments such as tonight’s. He kept his eye sharp at the range, never firing fewer than two hundred rounds a week. Because the war had made bullets scarce, he had to pack his own.

He had been told the woman stood five feet six inches, Valvano five feet nine. The gunman would be crouched behind his hostage, of course, and there would be precious little room for error. The kill shot would take every ounce of skill Hatfield owned. But the brass downtown were confident enough in his ability to give him the green light to shoot if he saw an opening.

Hatfield had just glanced down at his watch when the corner of his eye caught sight of movement in the doorway. His attention shifted quickly back to the M84 scope on his rifle.

The gunman was coming out.

As the ranking police officer on the scene, the life of the young woman rested in the hands of Captain Lyle Banner, a 24-year veteran of the Detroit force.

At the first sight of the gunman, Banner decided on a cautionary move, ordering those inside the roped area to take cover behind the police cars. Banner himself was standing, head and shoulders exposed, behind the car directly in front of the doorway where the gunman and his hostage had appeared.

The wooden door was open and the two stood behind a screen door, Valvano holding the woman in front of him. Even through the screen Banner could see she was blinking from the glare of the squad car headlights that bathed the entire scene in a shade of ocher.

Valvano shouted to the police to douse the headlights. Banner gave the order and the lights were switched off.

Approximately one hundred feet behind Banner, Hatfield watched the drama unfold through his scope. With lights from the living room illuminating her, he saw the woman clearly through the screen door. But he could barely make out the silhouette of the gunman’s head and torso behind her. It was no more visible than the dark outline of a pencil sketch. To a marksman like Hatfield, the distance of a hundred feet to the target wasn’t the dilemma; the problem was a distance that could be measured in mere millimeters between the gunman and his hostage.

“You got good news for me or do I kill the woman?” Valvano shouted through the screen.

“The kind of money you asked for is scarce this time of night,” Banner shouted back. “We’re working on it.”

“You’d better work fast. You’ve got fifteen more minutes before I kill the woman and myself. You know I’ll do it.”

Banner glanced down at his watch. He had no doubt the threat was real. Valvano was wanted in three states for a score of murders and had nothing to lose.

Through his scope, Hatfield saw the hint of the man, but knew he couldn’t chance a shot. In the dim light he could see that Valvano held a small pistol against the woman’s temple with his right hand, his left arm wrapped around her upper torso. She was an attractive woman in her late twenties or early thirties with a thin, straight nose and large, expressive eyes.

Hatfield moved the tip of the rifle muzzle downward, peering through the scope, looking for any chance of a shot. When he saw what she was doing, he couldn’t help but think,
God,
that woman has balls!

The Redneck Guide to Raisin' Children by Annie Smith
The Exploding Detective by John Swartzwelder
A Natural History of Hell: Stories by Jeffrey Ford
Mark of the Wolf; Hell's Breed by Madelaine Montague
The Devil's Garden by Jane Kindred
SVH08-Heartbreaker by Francine Pascal
Apricot brandy by Lynn Cesar
Agatha Christie by Tape Measure Murder
The Howling II by Gary Brandner
Divided We Fall by W.J. Lundy