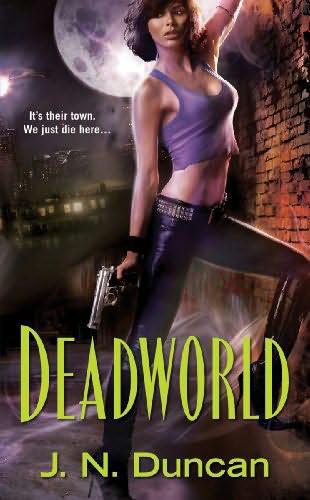 This book is dedicated in loving memory of my grandmother, Olive T. Jackson, an author herself, whose inspiration got me started on this long road to publication at the ripe old age of fourteen.

I would like to thank my wonderful agent, Nathan Bransford, the editor team of Audrey LaFehr and Martin Biro at Kensington for making my story so much stronger than its original form. A special thank you to all of the lovely women in the Maumee chapter of RWA for providing inspiration and support, and a special nod to Kat, who had a dream that she bought my book in a bookstore long before it ever sold. And last but certainly not least, to my family and specifically my wife, romance author Tracy Madison, for putting up with all of the vagaries of a two-person author household. Without you all, this book would not be the book that it is today.

A misty rain swirled down into the darkness between the two brick buildings. Flattened against one cold wall, Archie Lane huddled next to a stack of sagging cardboard boxes, peering out of the narrow alley at the sliver of sidewalk illuminated by a nearby streetlight. This was not how he had envisioned running away. There had been no envisioning to speak of, really. All he had wanted was to escape the smack down going on in his parents’ living room, where Dad had the leg up on the cursing scorecard and Mom was on pace to set a new “thrown objects” record. Now the midnight sounds of Chicago’s suburbs were frightening him even more.

They were not strange sounds. Archie recognized most of them, from the sounds of tires on wet pavement to the screeching yowls of two cats duking it out, but in darkness, all things magnified in the wrong direction. Every shadow contained lurking doom. Body parts lay rotting in every container. Every passing car was his dad hunting for him. Surely, he was destined for the belt with this one. That threat had been very explicit after the last time.

The problem was where to go? Every friend he knew would have parents who would turn him over and make a phone call. His grandpa would let him stay, if only he could remember how to get there. He was also a thirty-minute ride by car. On foot that might take all night, if he even knew what direction to go in.

Archie’s concerns had turned more immediate as the rain began to fall. It was getting cold. His long-sleeved shirt offered piss-poor protection, and, worse, he was starving. Where did street kids go when they were hungry and wet?

Archie hadn’t the slightest clue. He did not know a single street kid. If he could find one, maybe they could tell him. At worst, maybe he could find a store to hang out in for a while, maybe steal a candy bar or something to fill his rumbling stomach. There was a Kroger not far from his house, but the darkness had confused his sense of direction. It was not on the old downtown strip where he found himself now. It was . . . somewhere else.

Archie thrust his hands deeper into his jeans and ventured forth. He would just have to ask someone. It couldn’t be far, and it was open twenty-four hours. He could wander around until the sun came up and maybe, if he was really lucky, sneak back into his room without anyone being the wiser. Mom and Dad would be passed out by sunrise. As long as Dad didn’t come in to kick at the foot of his bed to see if he was sleeping, all would be good.

At the alley’s opening, Archie stood at the corner and poked his head out. There were only a few cars parked on the street. Further up at the corner, a couple walked quickly down the opposite sidewalk, huddled under an umbrella. Boy! They were in a real hurry, looking back at something, but Archie could not tell what. The intersection ahead appeared empty. Not fifty feet down the sidewalk, a car door opened, and a man stepped out. Nice car. Nice suit. He popped open an umbrella and looked up in Archie’s direction, eyes hidden behind dark, round glasses.

Archie ducked back into the darkness and watched as the man began to walk toward him. He hardly looked dangerous, but what Archie found disquieting, what spawned a gnawing worm in his gut, was that the slick-looking car eased along the edge of the street, matching him step for step. Archie took another step back into the darkness, just in case.

The man hummed a tune, some old-fashioned-sounding thing Archie didn’t recognize. His footsteps were silent upon the wet cement. When he got close, Archie held his breath, freezing every muscle of his body, willing it not to begin shivering. There was no way the guy could see him there, melded flat to the brick wall, right? He continued to walk, stepping across the alley’s opening, one step, two, but at the edge he stopped.

Archie’s heart leaped in his chest. The man, not ten feet away, paused and then turned, the umbrella resting lightly against his shoulder. He looked directly at Archie.

“I dare say, young man. Whatever are you doing out on a night like this and dressed like that?” His voice was old, reminding Archie of his grandpa, but it had a smoothness to it that belied the man’s age. “And huddled in that rotting, forsaken alley. Surely you must be cold?”

Stranger at night on a nearly empty street. Archie knew better. These weren’t the sorts of people you talked to when alone. “Pervs will snatch you right off your own street!” his mother had been fond of telling him.

A corner of the man’s mouth curled up beneath the shadows of the umbrella. “I see. No ride home from your mum or dad? It’s awfully late. Bad sort of folk out and about this time of night, Mr. Lane.” The blue car came to a stop behind the man, its windows cloaked in glossy, rain-splattered darkness.

“It’s okay,” Archie said, the worm in his gut now chomping gleefully at his insides. “I’m good. I don’t have far to go.” If he was quick enough, he might be able to bolt past the old guy. If not, one of those gloved hands could easily get a handful of shirt. The man’s words suddenly sunk in. “Hey. How’d you know my name?”

“I know your mother, Archibold,” he said, the other corner of his mouth twitching up to reveal a ghostly smile. “We met at the mall just the other day. I believe you were at the candy machines getting yourself a treat.”

Archie nodded. “Oh. Yeah.” His stomach rumbled at the thought of the handful of gummy worms he had gotten last weekend.

“Would you care for a ride home, Archibold?” When Archie remained silent, the man knelt down. “You ever ridden in a Rolls-Royce before?”

Archie shook his head. “Nope. It’s Archie, by the way. I hate Archibold.”

A deep chuckle rumbled out of the man’s throat. “Archie it is. I’ve got soda inside, and I believe there might be something you could eat.”

A ride in that car would be cool, no doubt. Free food and drink would be good, too. The worm paused in its hungry gnawing to shake its wary head. Don’t ride with strangers. You just never knew, did you?

He stood back up, looking down the street from where he’d come. “Almost two miles, Archie. That’s a bit of a walk on tired feet.”

“You know where I live, too?” Archie pulled his hands from his pockets. The worm was telling him to run, and the idea was making more sense by the second.

“Of course I do,” he said, kneeling back down. A gloved hand reached up to pull the glasses down the bridge of his nose. “I could not have followed you here if I did not, now, could I?”

Archie froze, his body and mind coming to an ice-encased standstill. “Whoa, dude. Your eyes are glowing.”

“They are.” A black gloved hand reached out toward him. “It’s a special trick. Can you see anything in them? If you look hard enough, you will see something very special indeed.”

One step, followed by another. Archie felt his hand reach out to take the strange man’s hand. There actually was something in the glowing, irisless eyes. Shadows, gray and swirling like fog, danced around inside them. Archie began to shiver.

The man stood up, his hand clasped tightly around Archie’s. “Very good, Archibold. You can see the other side. Would you like to go?”

The door latch clicked open, and Archie stepped toward the car. “Are they all dead over there?”

“Every last one, my young man,” he said and pulled open the door. “You see, they are my ghosts, but to join them, you must be one as well.”

“Oh.” The comforting warmth of the inside of the car beckoned. It felt so good against his wet, shivering skin. “Don’t you have to be dead to be a ghost?”

The gloved hand gently pushed Archie in the back, easing him into the black cave of the car. “But worry not, Mr. Lane. I shall take care of that.”

The door slammed shut, and a moment later the Rolls eased back into the street.

Everything for Us (A Bad Boys Novel) by Leighton, M.
MINE 3 by Kristina Weaver
High Heels in New York by Scott, A.V.
Mommywood by Tori Spelling
The Undead in My Bed by Katie MacAlister;Molly Harper;Jessica Sims
Saratoga Woods 02 The Edge of the Water by Elizabeth George
Carolyn G. Hart_Henrie O_04 by Death in Paradise
How to Seduce a Duke by Kathryn Caskie
The Law of Second Chances by James Sheehan
Mallets Aforethought by Sarah Graves