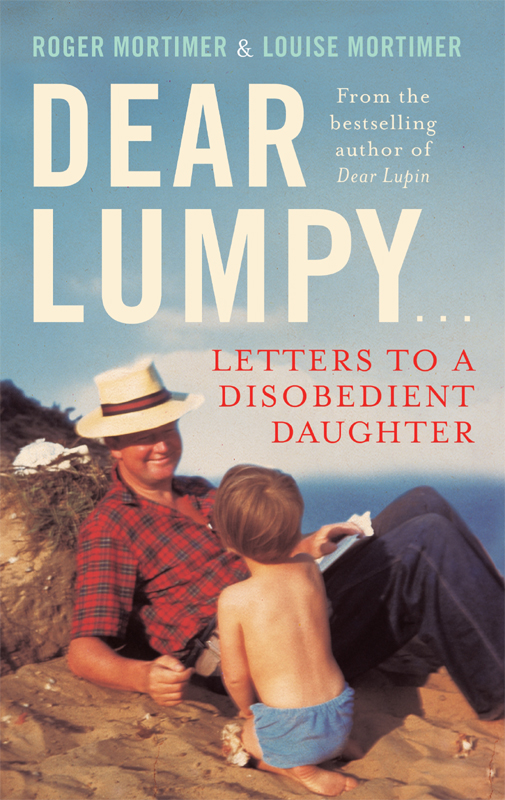 First published in the UK by Constable,

An imprint of Constable & Robinson Ltd, 2013

The right of Louise Mortimer to be identified as the author of this work has been asserted in accordance with the Copyright, Designs and Patents Act 1988.

Publication data is available from the British Library

For Rebecca and Benjamin

An Introduction from my Brother Lupin

My delightful younger sister gave me the great honour of choosing the cover photograph for her book,
Dear Lumpy . .
.

‘But you can’t see my face!’ was her immediate response. ‘Precisely!’ was mine.

In 2011, I got together with publishers Constable & Robinson to produce a small book as a tribute to my long suffering parents.
Dear Lupin
. . . was based around letters sent to me from my father and it would not be an exaggeration to say that expectations for sales were not that high. My father, although well known in racing circles, had been dead for over twenty years and I had barely read a book let alone compiled one before. At the first meeting with my editor he made the situation very clear ‘You’re quite funny but nowhere near as funny as your father so I would be most grateful if you would keep your literary contribution in this book to a bare minimum.’

Originally
Dear Lupin . . .
was going to be printed in a run of 3,500 copies and even then I had visions of trying to flog unsold books together with pots of homemade chutney at local Conservative Party bazaars. The publishers didn’t exactly boost my confidence when they asked me at one stage how many friends did I have. However, as luck would have it,
Dear Lupin . . .
sold rather better than anticipated and to my utter astonishment ended up as BBC Radio 4 ‘Book of the Week’.

Throughout all this I was fully supported not only by ‘my other half’ but also by my younger sister known in the family as Lumpy (or when in an uncommunicative mood as the ‘Lump with the Hump’). It was only recently, however, having always led us to believe she only had kept about ten letters to her from our father, that she finally came clean to the fact that she had a couple of hundred. Thus with a bit of arm-twisting I dragged her along to my legendary agent Maggie Hanbury and
Dear Lumpy . . .
was born. The letters to my sister, who was twelve years old at the time of the early ones, are a lot of fun and my dad clearly enjoys mobbing her and her friends up (as indeed do I). The letters are of a very different tone to the ones I received, which were largely of concern and exasperation, but equally witty and affectionate.

When
Dear Lupin . . .
was published I made it very clear (to anyone who was interested) that my dad had done all the writing and the humour. I merely contributed twenty-five years of disorderly conduct. Thus I felt a complete fraud when introduced as an author and felt that describing myself as one took disingenuous to boundaries not even tested by Tony Blair. This seemed to amuse Lumpy and her son Benjamin considerably (for some bizarre reason) and they made threats to give me a T-shirt with ‘I am NOT an author’ printed on it. So I am delighted that she now finds herself in an identically inexplicable situation.

I wish her and my father every success with
Dear Lumpy . . .

Even after the surprise success of my brother’s tribute to our father,
Dear Lupin . . .
, I made it clear, to anyone who was remotely interested, that I had absolutely no intention of producing a similar book myself. This was despite being endlessly asked: ‘Have you kept the letters from your father?’ or ‘Are the letters he sent you as funny and touching as the letters he wrote to your brother?’ However, rather surprisingly, it was my brother who persuaded me to actually dig out all the letters I had and read them.

I thought I had close to fifty cards and letters. As it turned out there were nearer two hundred. I read several of these to close friends who laughed until they had tears running down their cheeks. Then, with much encouragement and assistance from my brother, I started putting together this second tribute book to my father. We have not forgotten, of course, the inimitable character that was our dear mother who always had our best interests at heart and never failed to give us unusual advice and make rather extraordinary observations – such as on the way home from my father’s sister’s funeral when she remarked: ‘Do you know what? I think that’s the most fun we’ve ever had with Aunt Joan.’

The whole process of reading and sorting my father’s letters has been a challenge as I had not read any of them since his death in 1991, and not one letter had a date on it which included the year and I had not kept the envelopes. It was all extremely emotional and I found myself laughing, crying, and sometimes even laughing and crying at the same time. Above all, though, this magical inheritance, which had been kept in a drawer for over twenty years, brought my father and indeed my entire family back to life in a way that I would never have thought possible.

To say that I am proud of my father is an understatement. Growing up I was a ‘daddy’s girl’ and in my eyes he could do no wrong. Being the youngest and a daughter, my father was much more lenient and I was impossibly spoilt as I could twist him around my little finger. Having said that, he was like a rock and in times of need he was always there for me – wise, kind and always calm. I don’t remember him ever losing his temper. If he was annoyed, angry or upset about a situation he would just take to his typewriter and we would receive a dressing down that also managed to be loving – a real skill. I am eternally grateful to both my parents for not giving up on me despite their disappointment when I was excluded from one of the country’s premier girls’ schools for misconduct and for marrying my much disapproved of boyfriend, Henry, in secret.

Dear Lumpy . . .
is a companion volume to
Dear Lupin . . .
and the letters in the book are a further snapshot of all the ups and downs, the trials and tribulations of life with the Mortimers and their friends.

A Bit of History

My dad was born Roger Francis Mortimer on 22 November 1909. My grandparents were pretty well off and lived in a house in Cadogan Gardens, Chelsea, London. According to the 1911 census there were eight ‘live-in’ staff members. My grandfather, Haliburton Stanley Mortimer, was a charming man but by all accounts not a great stockbroker. My grandmother, Dorothy (née Blackwell) was an heiress of the well-known food company Crosse & Blackwell. My father had one sibling, Joan, born in 1907.

He was educated at Ludgrove School, Eton College and Sandhurst. In 1930 he was commissioned into the Coldstream Guards. He was a captain when his platoon fought a desperate rear guard action at Dunkirk in 1940 during which almost all of his men were killed and he was wounded. Unconscious, he was taken prisoner and spent the remainder of the war in prison camps running the camp radio. Many of my father’s friends in later life were those he met as prisonerof-war no. 481 in various Oflags and Stalags.

After the war he rejoined his regiment and, as a major, served in Trieste. However, in 1947 he resigned and took up an appointment with Raceform, the official form book for horse racing. He followed this by becoming racing correspondent of the
Sunday Times
until retiring almost thirty years later. He also wrote for various other newspapers, was a commentator for the BBC and became PR officer to the Tote. In addition, he wrote several classic books on racing, the greatest of which was undoubtedly
The History of the Derby
. His other books on racing included
The Jockey Club, Anthony Mildmay, Twenty Great Horses
and
The Flat
. My dad was also a keen gardener and quite an expert on military history.

He met my mother, Cynthia Denison-Pender, in 1947 and within six weeks had proposed to her. They were married in St Paul’s, Knightsbridge, on 10 December of the same year. My older sister Jane was born in 1949, my brother Charlie in 1952 and myself in 1957.

Other characters and acquaintances

Her Man with Iceberg Eyes by Kris Pearson
All the Devil's Creatures by Barnett, J.D.
Frosted by Katy Regnery
Catch That Bat! by Adam Frost
The Dragon&#8217;s Mark by Archer, Alex
Hot Water Music by Charles Bukowski
Dearly, Beloved by Lia Habel
A Drop of Red by Chris Marie Green
The Elder Blood Chronicles Book 3 From the Ashes by Melissa Myers
Shrink to Fit by Dona Sarkar