Death at the Beggar's Opera 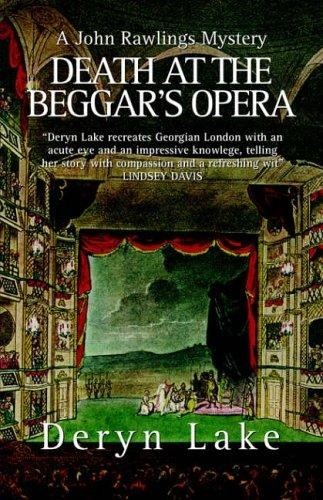 DEATH IN THE DARK WALK

DEATH AT THE BEGGAR’S OPERA

DEATH AT THE DEVIL’S TAVERN

DEATH ON THE ROMNEY MARSH

DEATH IN THE PEERLESS POOL

DEATH AT THE APOTHECARIES’ HALL

DEATH IN THE WEST WIND

DEATH IN THE VALLEY OF SHADOWS

DEATH IN THE SETTING SUN

DEATH AND THE CORNISH FIDDLER

DEATH AND THE BLACK PYRAMID

DEATH AT THE WEDDING FEAST

First published in Great Britain by

The right of Deryn Lake to be identified as the author of this work has been asserted in accordance with the Copyright, Designs & Patents Act 1988.

who once lived down Drury Lane.

It being an inclement day, plagued by needle-sharp rain and whipping winds, John Rawlings, after first safely locking up his shop in Shug Lane, hurried home beneath the protection of an umbrella, that useful invention from the Orient considered by many as too effeminate for a man to carry. Jumping between the puddles and avoiding the gutters, awash with indescribable and unspeakable items, John none the less considered that much as he disliked the prevailing conditions they had brought about some excellent business. As downpour after downpour had descended upon London, so had the door of his apothecary’s shop swung open, a bell attached above it ringing a warning that someone was present. And though most of this flurry of custom had come in simply to gain shelter, all had gone out holding a package of some kind; a bottle of perfume, some tablets for the gout, a cure for the clap, some carmine for a lady’s lips. Reflecting on the truth of the proverb ‘’Tis an ill wind that blows nobody any good’, John Rawlings hastened through the rain towards his home in Nassau Street in the parish of St Ann’s, Soho.

The time being shortly after four o’clock on that raw autumn afternoon, the candles of number two had already been lit, and as John turned the corner of Gerrard Street and saw the welcoming glow, he ran the last short distance to his front door. Hurrying up the steps, he closed the unfashionable umbrella, handing it to the footman who answered his knock, then bounded into the hall with one of his characteristic hare-like movements.

‘John?’ called a voice from the library, and only stopping to remove his dripping broadcloth coat, the Apothecary went to join his father.

This night Sir Gabriel Kent, who had adopted John Rawlings when the child had been but three years old, and was therefore a father to him in every sense but the actual, sat resplendent in a high-backed chair before a gleaming wood fire. Casually dressed, for he obviously did not intend to go forth on so foul an evening, Sir Gabriel was still wearing the black satin suit, heavily laced with silver decoration, in which he had dined. However, he had removed his high storeyed wig, an old-fashioned affair more reminiscent of the reign of the Stuarts than that of the Hanoverians, and had on his closely cropped head a black turban of particularly fine quality. As it was Sir Gabriel’s habit to affect black and white during daylight hours, black and silver for evenings and festivities, the only ornament in this striking headpiece was a silver brooch bearing a Siberian zircon, which glittered in the candlelight like a pool of iridescent water. Looking up from his book as his son entered, Sir Gabriel smiled and motioned to the chair opposite his, pouring a glass of pale sherry as he did so.

John took the offered glass from his father’s long fingers. ‘I’m going to the theatre with Serafina and Louis, had you forgotten? She has asked me to dine with them first, so I was obliged to close the shop promptly.’

‘Did you do good trade today?’

‘Very. The world and his wife, to say nothing of a few lovers, came in to avoid the rain and not one of them left without buying something.’

‘Were you called out at all?’

‘Only to attend a rakehell who had indulged too well. He lay festering in a darkened room wishing to die.’

Sir Gabriel laughed drily. ‘And what did you prescribe?’

‘I gave him a dose of salts fair set to glue him to his privy pan.’

‘Lud, how the world goes on!’ exclaimed John’s father, and laughed once more. ‘Now, to speak of more pleasant things. What is it you are going to see tonight? Pray remind me.’

‘A new production of
The Beggar’s Opera,
complete with special scenic effects, and mounted at Drury Lane no less.’

Sir Gabriel closed his eyes. ‘Ah, that sweet theatre! How many happy memories I have of it. Why, it was the very first place of entertainment into which your mother ever stepped. We saw
The Way of the World
and she remarked afterwards how very disagreeable all the characters seemed.’

‘A strange comment from one who once had to exist on the streets of London.’

John’s father sighed reflectively. ‘Despite her terrible struggles, Phyllida maintained a freshness and directness of manner which was most endearing. You have inherited something of that characteristic.’

The Apothecary smiled naughtily, half of his mouth curving upwards in what could only be described as a crooked grin. ‘Except when I am forced to dissemble, that is.’

‘That apart,’ answered Sir Gabriel with a twinkle in his eye, and put the tips of his fingers together.

It was almost with reluctance that John Rawlings left the library, some fifteen minutes later, and made his way upstairs to change for the evening’s entertainment. Anxious though he was to meet his friends and go out with them, he never tired of his father’s company nor, indeed, of conversing with the handsome older man, whose golden eyes were so full of wit and intelligence and whose keen brain had not been dulled one whit by the passing of the years.

As he put on his twilight clothes, John considered that of all his weaknesses his love of fashion was paramount. Indeed, had he had any other calling he would have dressed flamboyantly at all times. But the fact was that by day he must adopt sober black, for an apothecary not only made up prescriptions for doctors and surgeons but was also called upon to give medical advice and attend the sick in their homes, and for this reason could in no manner appear dandified. Therefore, at night the young man glittered like a bird of paradise by way of compensation. And this evening, knowing that he was to be in company with the exotic Serafina and her handsome French husband, John chose a suit of mulberry satin trimmed with gold, his waistcoat a riot of golden flowers and sparkling radiants.

‘Too much for Drury Lane?’

‘Not at all. Did you not say Louis intends to have a stage box?’

‘Then you will be as closely observed as the performers. Now send one of the footmen to call you a chair. You must not get so much as a drop of rain on such choice apparel. And you are most certainly not to take that terrible umbrella of yours. It would ruin the entire effect.’

John burst out laughing. ‘Why are you so prejudiced against it? It is a very sensible piece of equipment.’

‘Fit for nothing but to keep the sun off dusky maidens and Eastern potentates. You would never see me abroad with such a thing.’

The Apothecary kissed him on the cheek. ‘You would rather get soaked I suppose. Though, on second thoughts, I doubt the rain would have the temerity to fall on you.’

And with that he made a hasty exit into the small but elegant hall of number two, Nassau Street, where he put on his cloak, before stepping outside and into the waiting sedan chair.

It was a dismal night, dark and chilly, and after a few seconds of peering out of the chair’s window, John pulled the curtain across it and contented himself with thinking about the evening ahead, cheerfully contemplating the prospect of good company, an excellent repast and a fine theatrical performance. However, it was at that moment, just as he thought of Drury Lane, that the Apothecary felt a faint thrill of unease, which he instantly thrust aside. And yet, ignore this feeling as he might, it cast a shadow over him and he was glad when the chair was set down outside the gracious entrance to number twelve, Hanover Square, the home of the Comte Louis de Vignolles and his entrancing wife, Serafina.

They were waiting for him in the first floor drawing room, a beautiful couple in such harmonious surroundings that John felt a catch in his throat. Once they had been at war with one another, these two people, and it had been partly through his intervention that they had come together again. So it was with extra warmth that he kissed Serafina’s hand and made his formal bow to the Comte.

‘My dear John,’ said the Comtesse, embracing him fondly, ‘we are so very pleased to see you. What a delight this evening is going to be, with all of us old friends together once more.’

Again, unbidden, came the feeling of disquiet, something of which must have shown on the Apothecary’s face, for the Comtesse continued, ‘You seem anxious. What is the matter?’

John shook his head. ‘Nothing, I assure you. Nobody could be looking forward to the occasion more than I.’ And he squeezed her hands to emphasise the point.

A few months previously, in the summer of 1754, he had believed himself in love with her. Now he had come to his senses and simply rejoiced in the warmth of Serafina’s friendship, a far more comfortable relationship all round. None the less, this did not prohibit him from appreciating her beautiful bone structure and supple physique. Indeed, the first time he had ever seen her, John had thought of the Comtesse as a delicate racehorse of a female and his opinion had not changed during the period of their acquaintanceship.

Kissing her hand once more, the Apothecary said, ‘You are in fine beauty tonight, Madam. So is it your intention to conceal your face with a mask?’

Mana Mutation Menace (Journey to Chaos Book 3) by Brian Wilkerson
The Visitors by Katy Newton Naas
Strindberg's Star by Jan Wallentin
The Beginning After The End (Early Years Book 1) by TurtleMe
Brooklyn Brothel by C. Stecko
My Life in Darkness by Harrison Drake
The Wicked Guardian by Vanessa Gray
In My Mother's Time by Napisa, Guiliana
Written in the Stars by Ali Harris
The Incredible Tito: Man of the Hour by Howard Fast