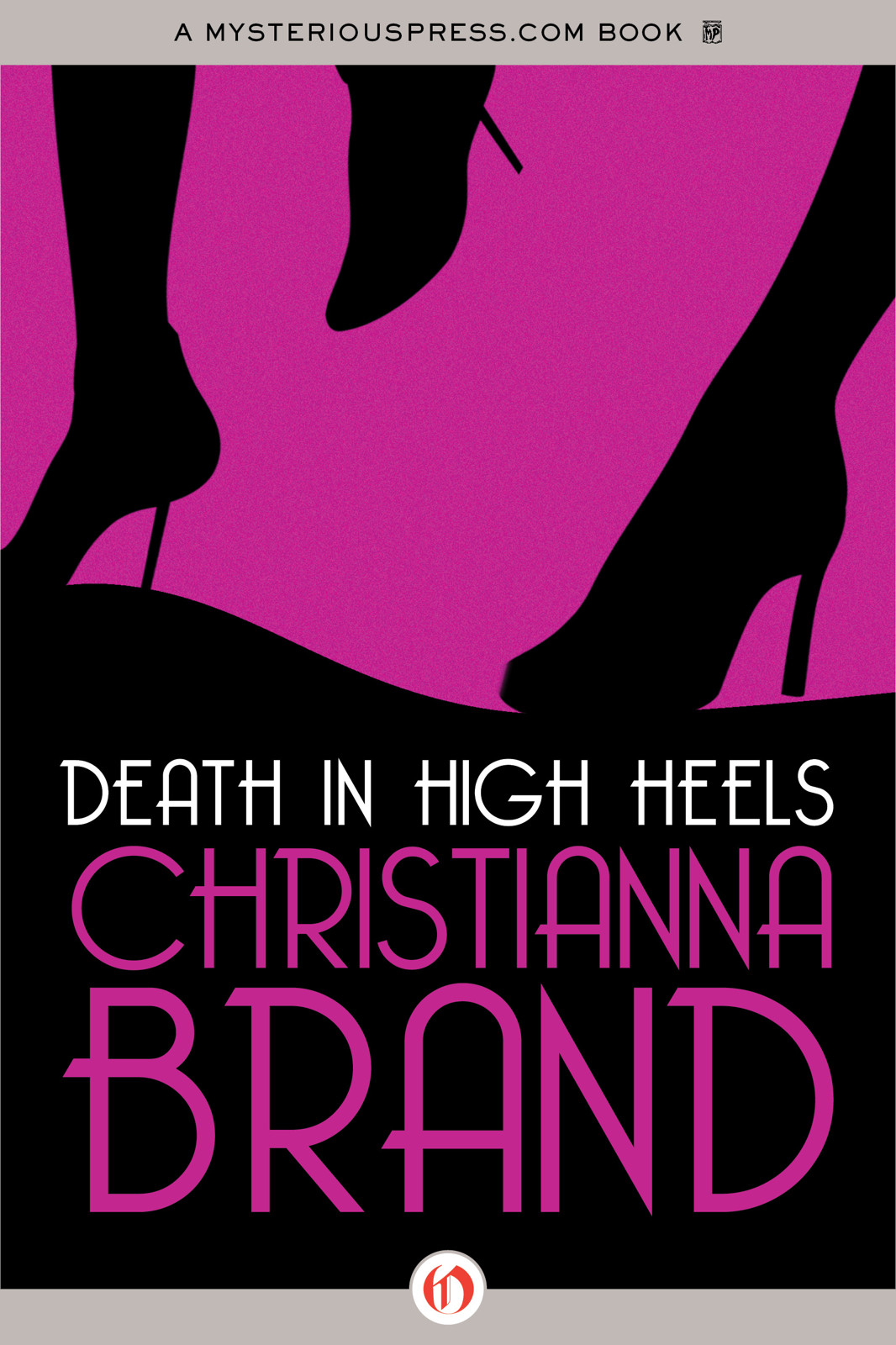 I
RENE
was always the first to arrive. At ten to nine precisely she clicked-to the door of her neat little, dull little bedsitt. and caught the tram for the corner. There was sure to be a crowd waiting for the bus, but if she got there a few minutes before nine it wasn’t so bad and she could at least wedge herself in and be permitted to stand, one of five privileged sardines, clinging to a strap and fumbling with one over-occupied hand for the ever-elusive threepence. Usually a good many people got out at Warren Street, and she could nip into a seat before the bus filled up again. It was a struggle alighting at Oxford Circus, squeezing past the succeeding batch of sardines, but at last she was out and if all had gone to schedule (Irene was very fond of schedules), with five clear minutes in which to walk along Regent Street and down the area steps into the basement of Christophe et Cie.

Mrs. ’Arris, the charwoman, would be there already, flicking a casual duster over the office furniture. Upstairs in the great gleaming showroom, with its golden carpet and shimmering curtains, its crystal lights and flattering mirrors, the silver glittered and the parquet shone and the glass was clear and bright; but in the basement, where the gilded staircase gave way abruptly to an unwholesome chocolate brown, a flick and a promise would do; and a flick and a promise was all Mrs. ’Arris vouchsafed. She was usually dusting the cloakroom when Irene arrived, having planned her work so as to ’ave a bit of a chat with the girls while they changed into their overalls of elegant turquoise blue; Irene dreaded these chats but never failed to ask politely after Mrs. ’Arris’s stomach, which was known to be an unruly member, and to listen with an air of sufficient interest to the history of its vagaries since the preceding day. “You really do have a bad time, Mrs. Harris, don’t you?” she would say, patting into place her soft, dark hair, polishing up her neat little shoes; and, “Musern’t grumble,” Mrs. ’Arris would reply, who seldom did anything else.

Victoria, meanwhile, would be taking leave of her husband on a scale that suggested a parting of at least a week. Victoria’s husband was a painter and, though his Christian name was James, was invariably referred to as Bobby Dazzler; they were accustomed to explain to anyone who would listen that Victoria had awakened one morning on their honeymoon and been quite dazed by his beauty; a tribute rather to devotion than to judgment, for the Dazzler, though a personable, was by no means a handsome young man. He looked less handsome than ever on this particular morning, clad in a pair of outsize green pyjamas, looking vaguely round the studio in search of her handbag. “You had it last night, because I remember you taking it out to pay the beer.”

“Here it is,” cried Victoria, snatching it up from behind a pile of canvases, and bestowing upon him a second impassioned embrace. She tightened a suspender, perched her hat at a perilous angle upon her shining head, and started off down the stairs. Half a minute later she was back: “
Do
remember to ring up your mother, darling, because if you don’t she’ll be certain to say it’s my fault.” The Dazzler promised that he would ring up his mother at once, decided to take one look at yesterday’s picture before so doing, and five minutes later was hard at work on it.

Irene and Victoria and Rachel were the sales staff at Christophe et Cie. Rachel was big and dark and handsome in contrast to Victoria’s golden frailty; she said as they met on the corner of Regent Street: “We’re as late as hell, darling. Irene’ll be in a flap.”

Doon did not care whether she were late or not. Doon was in charge of the stockroom; she assisted with designs and chose materials and doled out needles and pins. Irene, watching through the great glass windows her unhurried progress toward the shop, supposed that it was her artistic temperament that caused her to indulge in the romantic garments, the strange silks and barbaric jewelry that became her so well. One had to admit that she “could wear” them; but Irene had been born and bred in a cathedral city and she had a deep distrust for artistic temperament. Victoria, now, she could draw quite as well as Doon and she had ever such a good eye for colour; but she was as natural and ordinary as could be. Rather irresponsible, of course, but then she was married to an artist and everybody knew what artists were. Irene’s own husband’ had been a bird fancier; a steady enough occupation you would have thought, but one of his less attractive fancies had pecked him on the hand and, blood-poisoning setting in, he had incontinently died, leaving Irene at twenty-five a widow and penniless. That was five years ago, and now she was in charge of the showroom at Christophe et Cie and with ever such a good chance of being sent to the new branch which Bevan was opening at Deauville … she fell into a reverie in which highly coloured umbrellas grew out of flat, bright-yellow sand, and the air was drenched with Chanel Five.

Judy, the mannequin, disturbed her, pounding up the stairs: “Irene! has Aileen arrived yet? Have you seen her?”

Irene came back with a start to grimy London. “No, dear; unless she was here before me. She may have gone up to the workroom.”

“Not she! And that grey model has got to be finished to take to Lady Whatsit at the Ritz this afternoon, so that means that
I
shall have to go up and have the damn thing fitted on
me
, just because.… oh, there she is! Aileen … Oi, Aileen … can’t she hear me, the silly cow?”

“Not through the glass, dear, of course she can’t,” said Irene mildly.

Judy made wild signals; Aileen turned a face of exquisite beauty, lifted a streamlined eyebrow, and looked blank. Judy jerked a finger upwards, indicating an urgent summons to the showroom; Aileen looked first heavenwards, and then, interrogatively, at her umbrella. Judy made a gesture in response which sent her tripping round the corner with a look of refined disgust on her lovely features; Victoria and Rachel came tearing upstairs, zipping their blue overalls as they ran, and somewhere a clock struck ten. Irene solemnly unlocked the silver door: at Christophe et Cie the day had officially begun.

“Do you like this red frock in the window?” said Irene, when apologies and explanations for their lateness had sufficiently abated. “I thought it looked rather tasteful with just the grey hat and the parasol. What do you think of the grey?”

“I don’t think it matters at all, darling.”

“What does it matter, Rene, my pet? It looks all right’ Yes, there, I think it’s marvellous: does that please you?”.

“Oh, damn and blast Gregory,” said Rachel, crossly. “This whole damn place is in everlasting fear of Gregory. It’s nothing to do with her, Rene, what you put in the window. Whatever you do, she’ll tell her darling Bevan that it should have been something else, so why worry?”

“Stinking cat,” said Victoria, calmly, plastering lipstick on her lovely mouth. “I wish to goodness Bevan would send her to the new branch at Deauville, and then we’d be free of her.”

“I think it’s practically certain, darling. Cecil rang me up during the week-end. It’s all set.”

Doon wandered up from her basement office and Victoria, who had an eye for beauty, thought she had never seen her look more attractive. She was a tall, well-modelled creature, and every line of her body was outlined and emphasized by the clothes she wore. Her thick auburn hair was caught, with an illusion of simplicity, into a twist at the nape of her neck; beneath wide, wing-shaped brows her eyes glowed, dangerously green. She propped herself against a pillar, and, lighting a cigarette, asked without curiosity what they were gassing about.

“We were wondering about the job at Deauville,” said Rachel, evasively. “Have you heard anything?”

“Oh, it’s me that’s going. I’m having lunch with the boy friend to-day to talk things over.”

“We thought there was some idea of Bitchy Gregory getting it after all.”

“I don’t think so,” said Doon, comfortably. “Bevan promised me I should go. That’s the best of being girl friends with the boss,” she added, laughing. “I’m afraid Gregory’s chance was all washed up the day she first brought him to one of my parties.”

“Is that when Bevan began to get keen on you?” asked Irene, inquisitively.

“Yes; she was an ass, wasn’t she? I’d been in the shop all that time, and Bevan never bothered about me at all, though I was always a bit sweet on him; he was all taken up with Gregory, and then the fool wraps him up in a parcel and hands him over to me!”

“What on earth did he ever see in her, Doon?”