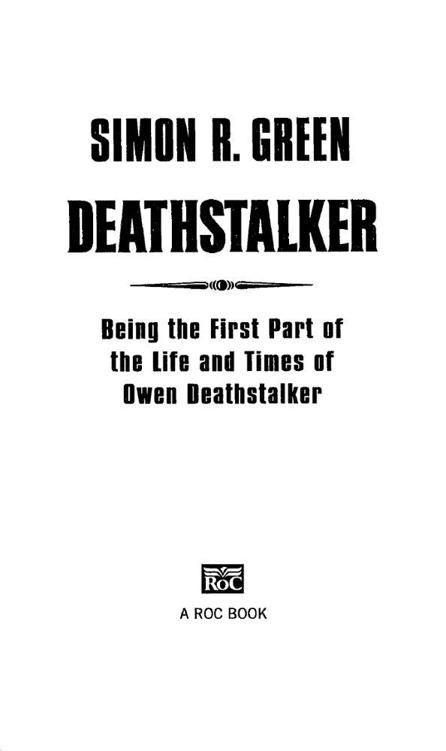 “A strange mix of high tech and swordplay, like a grand space opera. … It makes for lots of action-packed scenes and heroic efforts.”

“The action is fast and frenzied … manages to consistently entertain, with some wondrously quirky and warped characters.”

“Be prepared for an incredible romp through a wonderful universe of space opera filled with outrageous and incredibly powerful heroes and villains, swords and disruptors, and more lethal creatures than you can imagine.”

“Have fun with this. … Reading even one Deathstalker [novel] leaves one feeling jollier than before, for the series continues to avoid the lapses of tone so common in humorous space opera and fantasy.”

“[A] wild conclusion to [the] Deathstalker saga.”

Twilight of the Empire

The Adventures of Hawk & Fisher

Beyond the Blue Moon

Down Among the Dead Men

The Man with the Golden Torc

Something from the Nightside

Agents of Light and Darkness

Hex and the City

Sharper Than a Serpent’s Tooth

Chapter One: Clash by Night

Chapter Two: The Man Who Had Everything

Chapter Four: Rising to the Experience

Chapter Six: Under the Ashes, the City

Chapter Nine: Who’s Been Sleeping in My Head?

Chapter Twelve: Down in Wormboy Hell

It gets dark out on the Rim. Strange planets and stranger people can be found on the edge of Empire, where habitable worlds are few and civilization grows thin. Beyond the Rim lies uncharted darkness, where no stars shine and few ships go. It’s easy to get lost out there, far away from everything. Starcruisers patrol up to the Rim, but there are never enough ships to cover the vast areas of open space. The Empire is growing too large, too cumbersome, though no one will admit it, or at least, no one who matters. Every year more worlds are brought into the Empire, and the frontiers press hungrily outward. But not on the Rim. The Empire stops cold there, dwarfed by the unplumbable depths of the Darkvoid.

It gets dark out there. Ships disappear sometimes, and are never seen again. No one knows why. The colonized worlds make themselves as self-sufficient as they can and turn their eyes away from the endless dark. Crime flourishes on the Rim, unthinkable distances from the hub of the Empire’s strict laws; some transgressions as old as Humanity, others newly birthed by the Empire’s ever-growing sciences. For the moment the Empire’s starcruisers still keep a lid on things, dropping unannounced out of hyperspace to enforce the law with brutal efficiency, but they can’t be everywhere. Strange forces are at work on the Rim, patient and terrible, and all it will take to set them off is a simple clash between two starships off the backwater planet of Virimonde.

In high orbit around Virimonde, the pirate ship
Shard
sailed silently through the long night, hiding itself from unfriendly eyes. Not a big ship, the
Shard
, built more for speed than endurance, and passed from hand to hand through a dozen owners and commands. Now she carried cloneleggers and body banks, and every man’s hand was turned against her. Deep in the bowels of the ship, Hazel d’Ark, pirate, clonelegger and bon vivant, strode scowling through the dimly lit steel corridors and wished she was somewhere else. Anywhere else. The
Shard
wasn’t a luxurious craft at the best of times, but with most of the ship’s power diverted to maintaining the body banks, the old scut seemed even gloomier than usual. Which took some doing.

Hazel d’Ark, last owner of a once noble name, came to the locked door that led to the cargo bay and stood waiting impatiently for the door’s sensors to recognize her. Her mood was bad, bordering on foul, and had been ever since they dropped out of hyperspace six hours ago to take up orbit around Virimonde. Six hours of waiting for some word from their contacts down below. Something was wrong.

They couldn’t afford to stay much longer, but they couldn’t leave either. So they waited. Hazel wasn’t expecting any trouble from the planet’s security people. The
Shard
might be old, but she had state-of-the-art cloaking devices, more than enough to fool anything the peasants had on Virimonde. Not that there was much the planet could do, even if it knew the pirates were there. Virimonde was a low-tech, agricultural world, with more livestock than people. Its only contact with the Empire was a monthly cargo transporter and an occasional patrolling starcruiser, neither of which was expected for some weeks.