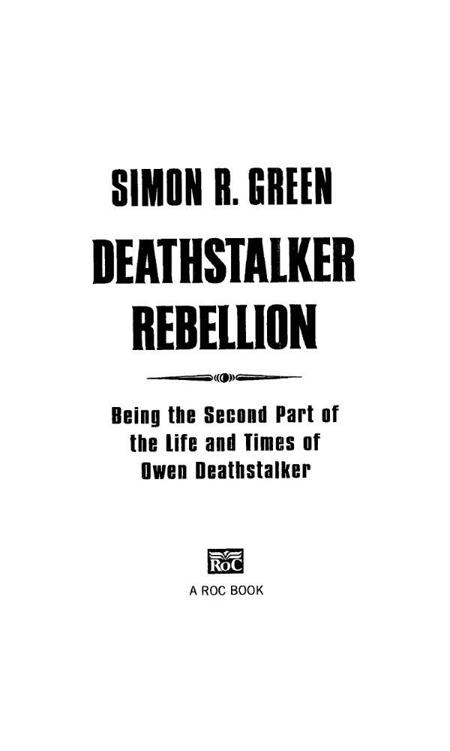 “A strange mix of high tech and swordplay, like a grand space opera … it makes for lots of action-packed scenes and heroic efforts.”

“The action is fast and frenzied … manages to consistently entertain, with some wondrously quirky and warped characters.”

“Be prepared for an incredible romp through a wonderful universe of space opera filled with outrageous and incredibly powerful heroes and villains, swords and disruptors, and more lethal creatures than you can imagine.”

“Have fun with this… . Reading even one Deathstalker [novel] leaves one feeling jollier than before, for the series continues to avoid the lapses of tone so common in humorous space opera and fantasy.”

“[A] wild conclusion to [the] Deathstalker saga.”

Twilight of the Empire

The Adventures of Hawk & Fisher

Beyond the Blue Moon

Down Among the Dead Men

The Man with the Golden Tore

Something from the Nightside

Agents of Light and Darkness

Hex and the City

Sharper Than a Serpent’s Tooth

PUBLISHER’S NOTE
This is a work of fiction. Names, characters, places, and incidents either are the product of the author’s imagination or are used fictitiously, and any resemblance to actual persons, living or dead, business establishments, events, or locales is entirely coincidental.

Deathstalker.
It’s not just a name. It’s a destiny.

In the beginning was the Empire, and all was well. It was the great adventure of humanity, springing out from its homeworld, pressing on into the endless dark in search of new worlds and wonders. It was a time of heroes and marvelous deeds, as humanity spread from world to world, and the frontier pressed remorselessly outward. A thousand worlds, with a thousand civilizations, blazing so brightly against the dark. The Empire.

It took four hundred years for the rot to set in.

Parliament became corrupt, the Company of Lords grew increasingly powerful on the profits from plundered worlds, and the Emperor ruled over all with an iron fist from his Iron Throne. Technology produced human clones and espers, declared them nothing but property, and institutionalized slavery. It was still a great Empire, but only if you were rich, or of noble birth, or had connections in the right places. Everyone else worked hard, kept their heads down, and tried not to be noticed.

And so it went for nine hundred years.

By the time of Owen Deathstalker, the Empire was ripe for rebellion. Owen never wanted to be a hero. Despite his Family’s martial history, he always saw himself as a scholar rather than a warrior. But when the Empress Lionstone XIV had him outlawed and put a price on his head that had his own people scrabbling to kill him, he had no choice but to run for his life and reluctantly grasp his destiny. He fell in with fellow outlaw Hazel d’Ark, pirate, bon vivant and ex-clonelegger, and together they fled to the rebel planet Mistworld, where they encountered Jack Random, the legendary professional rebel, Ruby Journey, the female bounty hunter, and Tobias Moon, an augmented man from lost Haden. Together they traveled to the planet Shandrakor, with its boiling jungles and endless carnage, and at the Last Standing of the Deathstalker Clan they discovered Owen’s ancestor of some nine hundred years earlier: the man
called Giles, first Warrior Prime of the Empire and creator of the terrible Darkvoid Device. He took them to the Wolfling World, where they met the last Wolfling, sole survivor of his genetically engineered kind. They passed through the Madness Maze and were changed, emerging much more than they had been.

Together they would inspire and lead the greatest rebellion the Empire would ever know.

In her palace of brass and steel, set within a massive steel bunker deep below the surface of the planet Golgotha, the Empress Lionstone XIV, the beautiful and adored, whose word was law and at whose whim blood flowed and people died horribly. At her side, the Lord High Dram, Warrior Prime and Consort, called by some Widowmaker, though never to his face. At her command, loyal subjects like Captain Silence and Investigator Frost of the starship
Dauntless.
At her feet, the Families jostled and conspired to win her favor, and hunted down her enemies without mercy. Lionstone had strengths and surprises of her own and would not easily be brought down.

And watching from the sidelines, waiting to see which way the wind might blow, many who might be swayed one way or the other. Valentine, head of Clan Wolfe, favored and powerful, a dandy and drug user of legendary proportions. Kit SummerIsle, head of his Clan, called by some Kid Death, the smiling killer. Cardinal James Kassar, fanatic and rising star of the Church of Christ the Warrior.

In the shadows, the clone and esper underground fought their losing battles and dared to dream of freedom. They had allies in the cyberats, computer hackers and non-people by choice, and also in restless younger sons who knew they would never inherit the Family name and riches. And just occasionally a hero would come to them, such as Finlay Campbell, once known as the Masked Gladiator, unconquered champion of the Arena; and Mater Mundi, Our Mother Of All Souls, uber-esper and unfathomable mystery, powerful beyond hope or sanity.

All the players were in place. The stage was set. All that was necessary now was for someone to strike the first blow. Owen Deathstalker, that reluctant hero, headed for Golgotha in the company of Hazel d’Ark, on a strange golden ship run by augmented men once known as the Enemies of Humanity; and though posterity has no access to his thoughts, they were probably “Why me?”

Chapter Two: Up to Gehenna and Down to Golgotha

Chapter Five: A Meeting of Minds

Chapter Six: Voices in the Dark

Chapter Seven: The Circles of Hell