Read Deceive Her With Desire Online

Deceive Her With Desire 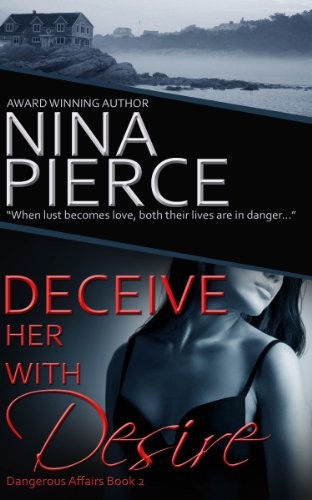 * Praise for BLIND HER WITH BLISS
(Tilling Passions Series Book 1)
:

5 STARS Miz Loves Books
~ Ms. Pierce has penned a wonderful mystery with twists and turns that will keep the reader guessing until the very end.

5 RIBBONS Romance Junkies
~ [Blind Her
With
Bliss] is by far, the best contemporary romance I have read this year.

A hot and sweet story…a book to go back to when you are in a sentimental mood.

5 STARS Amazon Reader Review
~
This
was a great read! I loved how 'real' Julie was as a woman, daughter and sister. The author did a great job creating characters with dimension and character. Damon was a hot, bad-boy with a heart of gold. There’s nothing sexier than that!! Kudos to Nina for a book that was not only passionate and sexy, but sweet and real
.
§

*
Praise for DECEIVE HER WITH DESIRE
(Tilling Passions Series Book 2):

5 STARS Romance Writers Reviews
~
This
book had me literally on the edge of my seat. It was a hot romance filled with suspense. I will be looking for more books by Nina Pierce, she is an incredible author!

Romance Junkies ~
Passion and suspense go hand-in-hand in [Deceive Her
With
Desire].  Author Nina Pierce knows how to turn up the heat and keep it on high.

4 STARS Hesperia Loves Books
~
The
story was quick & fast paced with tons of suspense that kept you turning the page.
Deceive Her
With
Desire
Book Two of the Tilling Passions series

Published by Nina Pierce of Rhode Island.
This
ebook
is licensed for your personal enjoyment only. No part of this publication may be reproduced, stored in a retrieval system, or transmitted in any form or by any means, electronic, mechanical, recording or otherwise, without the prior written permission of the author. If you would like to share this book with another person, please purchase an additional copy for each person. Thank you for respecting the hard work of this author. (
www.NinaPierce.com
)

This is a work of fiction. The characters, incidents and dialogues in this book are of the author’s imagination and are not to be construed as real. Any resemblance to actual events or persons, living or dead, is completely coincidental.

To Alan, my husband and soul mate, whose belief in my dreams keeps me going even when I can’t remember how important dreams can be. I love you with all my heart.

Writing is such a solitary endeavor, but sometimes we’re fortunate enough to come across other writers selflessly willing to give their time and energy to help a fellow author. This version of the book would not be possible without hours of brainstorming, critiquing and hand holding. Thank you JM.

Deirdre Tilling slammed the spade into the soil. Her booted foot thumped down on its metal edge, driving it deeper and transferring her frustration to the wounded earth. She’d been working the flowerbeds around her farmhouse since noon. And though the sun stretched the shadows of the maples long across her lawn, painting their leaves a deeper crimson, the hours of heavy labor hadn’t helped ease the pain of loneliness. Puffy clouds skittered over the tree line, reminding her of cotton candy and hometown fairs.
Brianna’s favorite autumn activity.

She swiped the back of her hand across fresh tears and turned the dust on her arm to streaks of mud.
Christ. And wasn’t she just a pathetic mess?
The spade bit into the ground, collecting another load of wilted petunias. Without ceremony, Deirdre added them to the growing pile of detritus in the wheelbarrow. She wished she could purge her heart of her ex as easily as clearing the summer gardens.

Exhaustion made her back and arms ache. But it was anguish that pinched her heart and made it difficult to breathe. It had been almost eight weeks since her live-in lover had announced she’d found someone else. Deirdre missed her with a physical need that made her ill with want.

Loneliness had become an all too familiar companion.

Deirdre threw the spade over the mess in the wheelbarrow and pushed the load to the mulch pile in the back corner of her property, under the white pines. A bitter sigh pushed past her lips. Love had not been kind to her. Over the years she’d struck out with both sexes. Three serious relationships in her twenty-five years and all of them had ended with a quiet fizzle. She hadn’t even had the satisfaction of huge explosive conclusions that would guarantee her a little time in Delmont’s rumor mill.

Nope, all she netted were whispered condolences and pity glances from a few close friends.

It hardly seemed fair her older sisters had both found someone. They were obnoxiously happy and engaged to the men of their dreams. Not that Julie or Meghan meant to flaunt it, but contentment surrounded them like a sickly sweet cloud that threatened to suffocate Deirdre at every family function. And with the Tilling clan, dinners, barbeques and random celebrations were a weekly occurrence Deirdre had come to dread.

Of course she’d never
not
go, she loved her parents too much to hurt them that way. John and Alice Tilling were coming up on their fortieth wedding anniversary and nothing meant more to them than their three daughters. Settling in her hometown and opening Tilling Gardens and Plants, a floral and landscaping business, with her sisters had seemed as natural as breathing.

But
Bri
had thought Delmont, Maine just wasn’t all it was cracked up to be. The pace was too slow, the neighbors too nosey, and Deirdre’s family too cloying. There wasn’t much Deirdre could do to change any of that, so she’d just watched the woman pack up and drive away with all of her belongings and Deirdre’s heart.

Deirdre dumped the flower refuse on the compost heap. It had all gone to seed. Rotting away to a pile of crap, just like her love life.
Damn she felt morose tonight.
She threw the shovel on top of the dirt and tipped the gray wheelbarrow on its side. She didn’t even have the energy to take care of her tools. Not a good sign for a landscaper.

Truth was, sometimes life just sucked and then went downhill from there.

She bit her lip, staunching the flow of tears burning in her eyes. When would the pain in her chest go away?

Her feet pounded up the backstairs of the white clapboard house where she’d spent her youth. Too large for her parents, they’d downsized over a year ago, moving across town and into the same neighborhood as her sisters. Deirdre had been the only one of the three Tilling daughters willing to spend the time and energy needed to gut and update the old farmhouse.

She’d proudly signed the papers and made it hers last fall, just before meeting
Bri
. Four months later, right after the holidays, the beautiful blonde had moved in. Willing to spend weekends pulling down walls, running new wiring and fixing leaking plumbing,
Bri
had worked tirelessly next to Deirdre. Now silence echoed through the rooms. The shiny remodel had turned into a lackluster project that took more energy than Deirdre was willing to expend. Though they had the roof, windows and siding replaced to update the outside, only the kitchen and the master suite had been finished inside.

Unable to bear the pain of an empty double bed, Deirdre had moved back into her old room on the second floor.

She stalked through the kitchen and living room, taking the stairs two at a time to the old fashioned bathroom, trying to outrun her sadness. Wallowing in it all afternoon had gotten her nothing but puffy eyes, blotchy skin and indigestion. Deirdre’s friend, Emilio, had invited her to some fancy shindig out on the coast. She had every intention of repairing the damage hours of self-pity had caused, slipping into some slinky black number and heels and heading out to join the world of the living.
Enough feeling sorry for herself.
Sometimes being without a significant other had its advantages in social situations.

Because if this party was like most of Emilio’s invitations, it practically guaranteed some good old-fashioned, no-strings-attached sex.
And tonight, that suited Deirdre just fine.

Ayden Scott stood at the mirror adjusting the collar of the white button-down oxford. Tucking the tails into the faded Levis, he wondered if it was too casual for the party. Shooting a glance over his shoulder, he studied the two other shirts heaped with the chinos and Dockers on his bed. He’d never had problems dressing before he went undercover for the Drug Enforcement Agency.

It was a simple party, nothing to worry about…yeah, except blending in.
He finger-combed his wet hair away from his face.
This was a new look for him. The clean-shaven face and his blond locks dyed black made him a different man. Even his mother, God rest her soul, wouldn’t recognize him.

He’d been in Maine almost two months now. They were getting close to a big bust. He could feel it. This was the second time the DEA had given him the privilege of lead on an investigation, and he’d be damned if he’d frig this one up.

Too many times the supplier fell through their hands, and they were left prosecuting the street dealers, thugs who did their bosses’ bidding. None of them rolled over on the head honcho. Not when their only punishment was a couple of years in the slammer, some probation time, or worse, a simple slap on the wrist. Anything beat ratting out your employer. But man, wouldn’t that just piss him off if this case ended that way?

Stand by Your Manhood by Peter Lloyd
Heart of a Warrior by Theodora Lane
Just Breathe Again by Mia Villano
Enchanted Cottage (Avador Book 3, Books We Love Fantasy Romance) by Martin, Shirley
Desire (Montana Dreams Book 3) by Jarrod, Cait
Start Your New Life Today by Joyce Meyer
Eye Sleuth by Hazel Dawkins
Cherishing You by JoRae Andrews
Do Evil In Return by Margaret Millar
The Girl and The Raven by Pauline Gruber