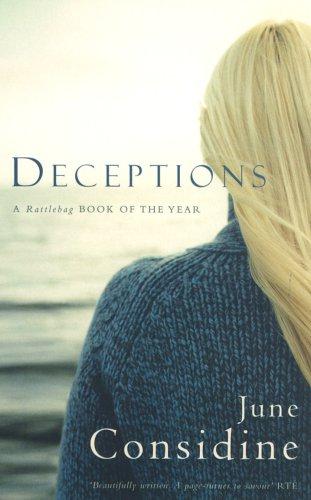 This novel is entirely a work of fiction.

The names of all characters and the incidents are fictitious and any resemblances to real persons, living or dead, is purely coincidental.

Previously published in Ireland in 2004 by New Island Books, as June Considine

First published in Ebook in 2012

The author has asserted her moral rights.

A CIP catalogue for this title is available from the British Library.

All rights reserved. The material in this publication is protected by copyright law. Except as may be permitted by law, no part of the material may be reproduced (including by storage in a retrieval system) or transmitted in any form or by any means; adapted; rented or lent without the written permission of the copyright owners.

A dark night, an illicit affair, a hit and run …

When the effects of an illicit love affair destroys Lorraine Cheevers’ marriage, the artist and mother uproots her teenage daughter from their comfortable city-centre home to make a new life for themselves in the small seaside village of Trabawn.

Meanwhile, Killian Devine-O’Malley, the young victim of the hit and run, lies in a coma. His father, well-known screen writer Michael Carmody, is determined to find the person responsible for his son’s accident.

His search brings him to Trabawn where he comes into contact with Lorraine. Though she has resolved to be alone, she cannot deny the strong attraction she feels towards this troubled stranger who has appeared so suddenly in her life.

But why has Lorraine turned her back on friendship and love? What lies behind her flight from all that was once familiar? As the bond between them grows, the stakes rise. Because what neither of them know is just what the other is running from. Or why it matters.

Deceptions
is a gripping tale of betrayal and consequence, love and illusion, and an unexpected attraction that won’t be denied.

‘From the opening section, this page-turner is gripping, all the more because it presents the dilemmas of betrayal with brutal honesty’

‘A gripping tale of adultery and illusion’

‘Dealing with passion, adultery, deception and tragedy, and how the past has a way of creeping up on you, Deceptions is a really intriguing page-turner with a surprising twist.’

To Romy and Ava, two special little girls who have turned grand-parenting into a privilege.

Dublin is a city with eyes. A gossiping great-aunt who sees around corners or peers suspiciously through the walls of quiet pubs and dimly lit restaurants. For this reason he has booked overnight into their favourite hotel, a discreet, old-fashioned country house buried in the seclusion of the Wicklow hills. Over the years the Oakdale Arms has remained an oasis in their busy lives. They are familiar with the narrow corridors and thread-bare carpets, the flocked wallpaper that no longer has any discernable pattern and the grandfather clock in the lounge which, on the hour, gives forth a doleful boom, reminding them that time may only briefly be stolen. Its shabby ambience is due to neglect rather than a contrived nostalgia and, with no stylish attribute to lift it from the mundane, it remains a hidden place where none of their friends or acquaintances would dream of staying.

The bell jangles when they enter the lobby and a porter, stooped and worn as a cliché, insists on carrying their overnight bags to their room. They know him now, have laid an affectionate claim on him, as they would to a favourite pet, and have named him Igor. He exists in their minds only for the length of time they stay at the hotel and is as much a part of the furnishings as the curtains that drape with tired indifference from brass hoops or the faded paintings of fox hunts adorning the walls.

She showers and dresses for their evening meal. Satin and lace lingerie are concealed beneath a sheer silk dress of midnight-blue. She pirouettes before him, laughing in mock-protest and pointing at her watch when he tumbles her onto the bed. They tussle, not seriously – the night is only beginning and they are at an age where anticipation is more enjoyable when it smoulders across a restaurant table. His mobile phone rings as they are about to leave the room. His shoulder is hunched when he answers, his voice lowered, as if protecting her from the intrusion.

She closes the door behind her and walks towards the lift. The smell of turf smoke, pervasive and homely, reminds her that an open fire burns in the lounge. Later, after they have eaten, they will relax in the shabby chintz-covered armchairs with a glass of brandy before retiring for the night. A tour bus has arrived and the lobby is filled with big-boned American men in comfortable shoes, enquiring about the availability of ice-making machines. Their wives, an authoritative twang to their accents, busily supervise the removal of luggage to their rooms.

She has reached the restaurant when he calls her name, an apologetic sound, and catches up with her. Their waiter, deferential in black, greets them without a flicker of recognition and leads them to their favourite window seat. Weary-wise in the ways of illicit passion, and armed with a generous tip, he will forget their existence as soon as they walk from his table.

The food on offer is as unimaginative as ever, an emphasis on roast meats and over-boiled vegetables. The dessert menu reminds them of childhood treats: Banana Splits, Knickerbocker Glories, strawberry jelly and ice-cream. While they eat, their conversation skims over the names of forgotten toffee bars, sweets and biscuits. They regale each other with food horror stories, remembering their most hated meals and the tactics they used to avoid eating them. On holidays in Trabawn, she says, her uncle gathered mushrooms in the morning and fried them in butter for breakfast. Disgusting. They reminded her of slugs sliding down her throat. She makes a slight moue of disgust and traces her index finger across the rim of her wineglass. This is a trivial conversation yet preferable to long, tortuous discussions that move in a widening but nowhere circle. Surrounded by noisy tourists demanding jugs of iced water and a detailed analysis of the menu in case allergies lurk among the overcooked vegetables, they can relax and touch hands, lean over the table and stare into each other’s eyes, whisper words that promise much in the hours ahead.

Their meal is almost over when an elderly couple enter and are led to the only available table at the opposite end of the restaurant. Casually dressed in slacks and chunky sweaters, their sturdy boots well-worn and dusty, they have obviously been hill-walking. The shock of their arrival is so instantaneous that her hand freezes as she raises the wineglass to her lips. She remains in that position, her attention fixed on the couple who accept the menu and listen intently while the waiter describes a certain dish. Her companion has not yet noticed them. He continues talking until she quietly utters their names. His cutlery clatters against his plate. She winces, imagines the sound strumming across the room, can almost feel the jolt of disbelief between them and the couple should their eyes meet.

They must leave immediately. She makes the decision without hesitation. Their love is a two-edged blade where discretion and passion hone each other to a dangerous edge. This balance must be respected. She will collect their luggage from the room. He will settle their bill at Reception. He nods agreement. Observing his stricken face, she hopes he will have the necessary self-control to leave the restaurant without attracting attention.

Sheltered by sturdy American shoulders, she looks neither to right or left as she walks away. Within a few minutes she has packed their clothes and switched off the light. She avoids the old-fashioned lift and moves swiftly down the back stairs, which are steep and have a way of meandering off into culs-de-sac or laundry rooms. Eventually, she exits from the side entrance of the hotel. She recognises the hill walkers’ red Toyota, which is parked behind bushes, and hurries onwards to where he is waiting for her, already strapped into the car and with the ignition running.

“Can you believe it? Jesus Christ! Can you credit that for a
fucking
incredible coincidence?” He drives down the avenue and out through the high spiked gates. Trees line the road on either side, oak, beech and chestnut, leafless now that November is here.

“Did they notice you leaving?” Her pulse still races and she releases her breath in a long drawn-out sigh when he shakes his head.

“What shall we do now?” he asks. “It’s too risky to stay around here.”

“We can’t risk a hotel in Dublin,” she replies.

“Your house is empty.”

“I think
not
.” His foot presses harder on the accelerator.

“Just a thought.” She rests her head against the back of the seat then slumps, relaxing her shoulders. “We should do the sensible thing and call it a night. I’m still in shock after that experience.”

“It could be difficult explaining why you’re home tonight instead of tomorrow?”

“Not really. I’ll tell him the seminar was so well organised it wasn’t necessary to stay overnight.”

“Will he believe you?”

He leaves the quiet roads and speeds along the motorway. He bypasses Bray, heads towards Blackrock, stops at the level crossing beside the Merrion Gates. A DART speeds northwards, windows flashing. Traffic is light along Strand Road. They pass the Martello Tower and the tall palm trees, the empty park benches and esplanade, the sand palely gleaming on the retreating tide. She stares across the sea towards the jetties and wharfs glittering reflectively on the waters of Dublin Bay.

“Remember the time –”She touches his wrist and he nods, instantly picking up on the memory.

The Bat that Flits by Norman Collins
Love Is... by Haley Hill
The Gloaming by Melanie Finn
Room 1219: Fatty Arbuckle, the Mysterious Death of Virginia Rappe, and the Scandal That Changed Hollywood by Greg Merritt
Cover of Night by Linda Howard
Deviation (A Defined Series Book 1) by M.C. Cerny
Her Dragon Hero by Angela Castle
The Whole Story of Half a Girl by Veera Hiranandani
Gull Island by Grace Thompson
Don't Look Back: sequel to He Loves Me Not (Lily's Story, Book 2) by Kersey, Christine