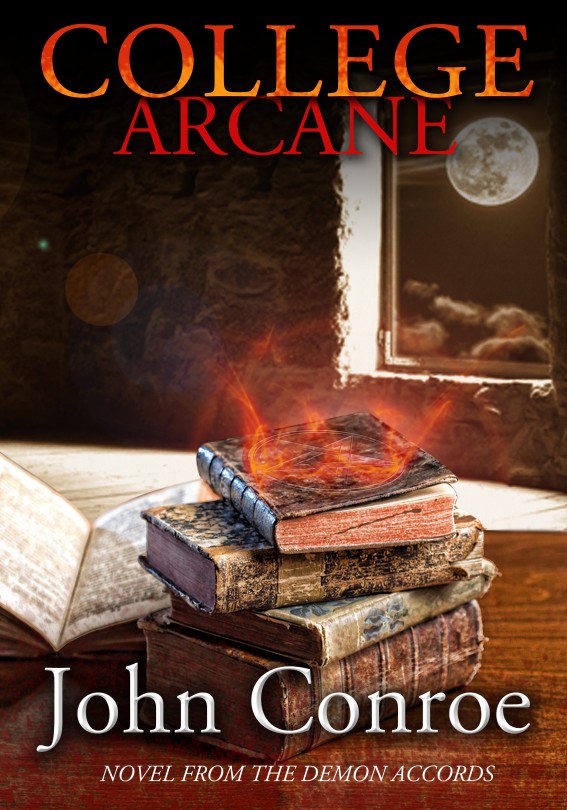 A novel from the Demon Accords

This book is a work of fiction. All of the
characters, organizations, and events portrayed in this novel are
either products of the author’s imagination or are used
fictitiously.

All rights reserved. No part of this
publication may be reproduced, stored in a retrieval system, or
transmitted in any form or by any means, electronic, mechanical,
recording or otherwise, without the prior written permission of the
author. Smashwords Edition, License Notes.

Carpet adhesive. Carpet adhesive and
pleather. Those were the smells I would always associate with the
first day of college. Well, not college really, because that didn’t
start till Monday and this was only Saturday.

Still, it was move-in day and the first day
of being away from home and the first day of whatever
this
was. X-Men academy or Hogwarts, or maybe just the school for the
freaky and furry kids.

Caeco was sitting next to me, absolutely
still, reclining in the plush pleather cinema seats of the
classroom, re-reading the material we had received along with our
ID cards and room keys. Not sure why she bothered, as I’m certain
she’d memorized the whole damn thing the first time she read it.
Having nano-sized computers in your bloodstream is useful that
way.

The room was brand new, as were the dorms,
the student lounges, and every other room and hall in the place.
The building itself wasn’t new, just completely redone and
redesigned. The shell was an old industrial building on Pine Street
in Burlington, a remnant from the city’s youth. There were numerous
old factory and warehouse buildings along Pine, now converted to
artists studios, architectural salvage and recycling stores and, of
course, restaurants. In Vermont, everyone is a foodie, and new
restaurants pop up all the time.

The building stood a bit apart, surrounded by
what might have once been storage yards but were now newly paved
parking lots. Beast, my trusty ‘72 Toyota Land Cruiser, was safely
parked between the gleaming white lines of a secluded spot, well
away from the other students’ cars.

It was so bizarre—just a few weeks ago, I’d
been in high school, a place my friends, Rory and Jonah were still
stuck in, and here I was about to begin college.

Despite the smell of adhesive, which was
strongest in the carpeted tiers of seats, the room wasn’t classroom
typical. The brick walls and overhead steel beams had been left
exposed and the floor of the room, at the teacher’s level, was
concrete that had been polished to a gleaming shine. The effect was
much warmer, more of an artsy marketing firm vibe, like everything
here was balanced to enhance the creative juices. The halls and
even our dorm rooms were similar.

Aunt Ashling, her partner Darci, Levi, and
Caeco’s mom had all left after helping unload our stuff in the
freezing January cold and then taking us to warm up for lunch
downtown at the wood-fired pizza place. Since coming back, we had
barely enough time to meet our respective roommates before all four
of us headed to the largest of the three classrooms in the
building, following the instructions of the staff. It was time for
a mandatory welcome meeting with the program director, Gina
Velasquez. Caeco and I had met her once before. She was just a
weary, distraught mom then, excited and relieved beyond measure to
get her daughter back. But that’s a whole other story.

Caeco’s an on-time kind of girl, no doubt the
result of her military programming, so that meant all four of us
were almost the first into the meeting room. With all seating
options open, we had mutually decided on the middle of the three
sections, third row from the top, with nobody above us. From there,
we watched the others file in.

It looked like about forty of us, in a room
that would seat a hundred to a hundred and twenty with ease.

Caeco was on her third time through the
brochures, policies, and other propaganda, so I occupied myself
studying my classmates.

My new roommate, Mack, was sitting one row
below me with his sister, Jetta, who was Caeco’s roommate. They
seemed really close, which made sense as Mack had told me they were
orphans. He was nineteen, a lean five-ten or so, with a
surprisingly deep voice and messy brown hair. His sister was two
years younger, sporting bottle bright red hair and brown eyes.
Standing about five-six in leggings and a Lycra performance top,
she looked athletic—and serious. Cute though. My initial opinion
was that she might be a good fit as Caeco’s roomate. In fact, even
her bracelets were those paracord survival things that you see
being sold in outdoor stores and surplus catalogs. Her belongings
were minimalist and she appeared to favor practical over flashy.
Much like her brother. Mack hadn’t brought much stuff, either. All
of their personal gear had fit in their older compact Chevy pickup
truck. But everything was clean, well cared for, and
functional.

Caeco and I had each brought a dorm-style
fridge and small microwave, gifts from Levi. When I extended fridge
rights to Mack, he had seemed both surprised and cautiously
pleased.

Mack was a freshman like Caeco and me, but
Jetta would be finishing out her high school degree here while
taking college courses too. I never heard of that before, but what
the hell… anything to get out of high school.

Most of the kids in the room seemed to be
just kids—human, that is. I know that because I scanned them with
my Sight and their auras were the solid blue of normal humans. They
sat in pairs or quads, looking around at their peers with
expressions of curiosity. But a couple groups stood out to my
Sight.

Sitting several rows below us was a small
group of weres. At least I was pretty certain they were weres.
Chris Gordon had told me that weres had an aura of blue flecked
with green, which matched theirs exactly. Six males, spread out
over twice that many seats, lounging. Talking and joking among
themselves, they were studying the other students, particularly the
females. One kid was a giant, maybe six-five or so and built like a
wall. He was the loudest, having draped himself over three seats,
demanding that people notice him. I already didn’t like him. Much
of his attention was centered on the four girls one section over,
but that was understandable, as mine was too.

Attractive yes, but it was more the fact that
they were all witches that had me studying them, their auras
flecked with black. A pair of tall, curvy identical blonde twins
who had a Nordic look going on, a girl of obvious Native American
ancestry, and another dark-haired girl I hadn’t been able to get a
good look at all sat in one row.

Above them sat a very pretty Asian girl and a
small brunette who didn’t look old enough to be out of high school
yet. Those two had normal auras.

Sitting even further above them was another
young brunette, but this one had a white aura. The only aura I had
seen like it before belonged to Tanya Demidova and her two vampire
teammates, so I was pretty certain this girl was a vampire. She was
strangely isolated; the three seats next to her and the row above
and below her were all empty. Maybe some deep-seated instinct
warned the other kids not to get too close to a dangerous predator.
She suddenly swiveled around and locked eyes with me. I jerked my
gaze down toward Caeco’s reading material as if I, too, found it
fascinating. Smooth, O’Carroll, smooth.

“Stop creeping on the other kids, Declan,”
Caeco said in a quiet voice, not looking up. “Especially the
vampires and werewolves.”

Below us, a brown-haired boy in the wolf pack
snapped his head around to look up at us and I could just about
feel the vampire still watching. The boy started to turn back
around, but noticed Mack and Jetta giving them a shy wave before
facing forward.

“You know they probably have hearing as good
as yours,” I said in a whisper.

“Maybe,” she allowed, finally looking up at
me and smiling.

Five adults filed into the room, led by a
pretty woman with very dark hair and deep brown eyes. She was in
her thirties and wore a genuine smile and a blue aura. She looked
much different than the scared mom I had met several months before.
Her name was Gina and she was the director of this school for
monsters and maniacs.

One of the two men following her had the
green and blue aura of a were, giving possible explanation to the
deep scar that trailed from his lower right jawline, down his neck,
and under his blue golf shirt. He was muscular and fit, also
looking to be thirty or so, with a decidedly military air about
him.

The woman behind him was a witch, and
possibly forty years old. She was tan, with dark hair and dark
eyes.

The other male was even tanner than the
witch, with flashing white teeth and a bald head. Maybe fifty to
fifty-five. The last person was a woman, the oldest yet, with
unabashedly grey hair, but thin and healthy looking.

All four sat in in the very front row of the
room facing Gina.

“Good evening everyone and welcome. I’m Gina
Velsaquiz, the Director of this little experiment, and I sincerely
hope you are feeling at least a little excited about our futures
together.

“For most of you, this is your first time
away from home and that’s an unsettling thing, so please, please
let us know if there is anything we can do to help you
acclimate.”

She smiled through the whole thing, looking
honestly happy to be there. Her right hand tapped the big white
board next to her and words appeared, stacked vertically.

“Oracle, one of the two sponsors of this
program, is inordinately fond of acronyms. So we have this little
beauty.”

She tapped the board again and the first
letters of each word self-highlighted, the rest of the words
dissolving away and the letters swirling about to form ARCANE.

“Welcome to College Arcane, an educational
experiment funded jointly by the Occult Research Alternative Combat
League, also known as ORACLE, and the Demidova Corporation. Our
purpose is to provide you, the children of the supernatural world,
with a unique blend of college education and training specific to
your own unique natures.

“Some of you were born into families with
long histories of exposure to the paranormal. Some were born to
normal families that had no idea how to handle your special gifts.
And some were just exposed, early and often, to the darker side of
life. Whichever path you come from, the hidden world has left its
stamp on you, perhaps making it harder to fit into normal society,
to find your place. That’s our mission: to help you fit into this
world.

The Missing Manatee by Cynthia DeFelice
Henry James: Complete Stories 1864-1874 by Henry James
Moonspawn by Bruce McLachlan
Beach Road by Patterson, James
Vision of Light [The Renegades 1] by Amanda Hilton
A Killer Crop by Connolly, Sheila
Unknown by Unknown
The Price of Power (The Price of Secrets Series Book 2) by Ashley Drake
Get Smart 9 - Max Smart and the Ghastly Ghost Affair by William Johnston
Maxed Out by Kim Ross