Demon Hunting In the Deep South 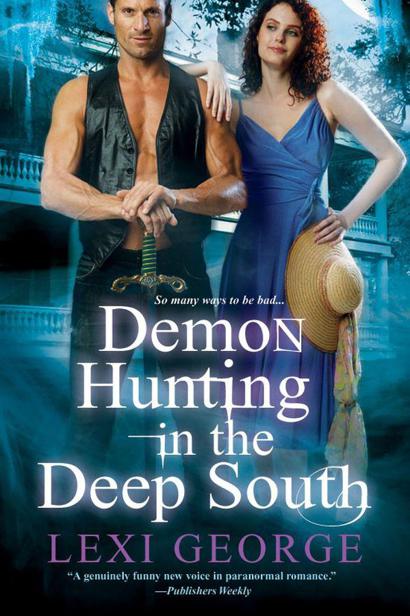 To my husband, David, who stressed over every page of this book
with me.
I love you, Captain Underpants.

To Mama, who taught me to love the written word and saved my
awful poems because she thought I had talent.

And to Letha, my biggest cheerleader.
I love you, sis.

B
lood. There was so much blood, especially on the dead woman sprawled across her desk.

Evie stared in shock at the corpse from the doorway of her office. Death did not become Meredith Starr Peterson. She lay on her back like a broken doll, her blue eyes open and staring, her carefully painted mouth twisted in a frozen scream. The pink sheath dress she wore was hitched around her white thighs. One designer stiletto pump was missing, and her matching pink ruffle-pleat cardigan was ripped and torn. The blade sticking out of her chest didn’t do anything for her, either.

Evie’s heart jerked in a crazy rhythm. Oh, God, what was happening?

Pulling her stunned gaze from Meredith’s body, she looked around. Outside, things at the lumber mill seemed normal. A forklift rumbled past her window on its way to the holding yard, and in the distance she heard the muted whine of the saw and the barker. But inside things were a nightmare. Her once neat office looked like a slaughterhouse. Spatters of blood stained the beige carpet and khaki walls, ran in thin rivulets down her filing cabinets, and dripped off the framed print hanging over the bookcase. There were red streaks of it on the window and splashes on her brand-new ergonomic desk chair. Crimson polka dots decorated the paperwork strewn around the room.

The room smelled of death and something else. Scents, Evie knew. Soap-making was her hobby and her passion. The rich, fruity scent of frankincense overlaid the nauseating odor of something rotten.

She swayed and grabbed the door frame, her stomach rebelling. She needed to get out of here, but she couldn’t seem to move. She kept staring at Meredith’s poor, tortured body. Whoever killed her had taken his time. The victim was covered in blood from dozens of shallow cuts and stab wounds. The murderer must have chased poor Meredith around Evie’s office, whittling at her as she ran. Playing with her and taking his time. Enjoying her pain.

When he tired of the game, he stabbed Meredith in the chest, pinning her to the desk like a bug.

Evie shuddered. Meredith looked so small . . . so pathetic. Hard to believe this shattered thing was her nemesis since the seventh grade—the cool, popular kid who called her Fatso and the Whale.

On Wednesday, Meredith had publicly accused Evie of having an affair with her husband, Trey Peterson, the heir apparent to the Peterson timber fortune. Evie’s
boss.

And now it was Friday and Meredith was dead in her office.

The handle of the knife in Meredith’s chest glittered in the early-morning sunshine. It was mesmerizing, hypnotizing. Evie took a step inside the room. No, not a knife, she realized in dawning terror as she got a better look. Meredith had been murdered with a letter opener.
Her
letter opener, the silver one engraved with her initials, a recent gift from Trey. The man she was supposed to be having an affair with.

Oh, this was not good. This was definitely not good.

She drew closer. Funny thing about that letter opener. The handle was clean. Spotless and obscene in its shininess. Not a drop of blood on it.

She wanted to look away, to run screaming from the room, but she couldn’t. Some invisible force dragged her reluctant feet to the desk, like iron to a lodestone. Inside her head, she heard a chilling, relentless litany.

Touch it. Touch the knife
. The evil whisper filled her mind.

Shaking with the effort to resist the compulsion, she reached for the letter opener, tears of fright and frustration dampening her cheeks.

The deep, compelling voice rang out, shattering the spell. A pair of strong arms wrapped around her and jerked her away from the desk. She caught a brief whiff of an intoxicating scent, a subtle, dizzying combination of cedar with notes of lavender and bergamot. Whoever her secret savior was, he smelled divine.

The spicy scent stirred a whisper of memory deep within her. It fractured and flew apart as she was lifted and sent spinning into nothingness. There was a brief, falling sensation, and then she was sitting on her front porch steps.

Dazed, Evie looked around, trying to focus on her new surroundings. What happened? How’d she get here? Her office at Peterson’s Lumber Mill was five miles outside of town. She must be in shock. Yeah, that was it. She drove herself home but didn’t remember doing so because of the trauma. There was no other explanation.

She looked around. No car. It was like she’d fallen out of the sky and onto her front porch. Oh, God, this was nuts.

Shivering, she rubbed her arms and encountered a leather strap. She still had her purse on her shoulder. With shaking hands, she reached inside, retrieved her cell phone, and dialed 911.

As she hung up the phone, a Pepto-Bismol-pink van pulled into the driveway and stopped. It was her friend, Addy, in the delivery van from her flower shop.

Addy got out and strode up the sidewalk. Her white-blond hair was pulled back in a sleek ponytail that bounced with every step. She was dressed for work in a clingy silk top and a knee-length skirt that showcased her long, sleekly muscled legs. Some of Evie’s panic receded when she saw her best friend. Addy would stand by her, no matter what. Together, they’d figure this thing out. They were as close as sisters despite their obvious differences. Addy was beautiful, funny, and a smartass to her DNA, not shy like Evie.

“I came to see about you.” Addy’s brown eyes were wide with concern. “You all right, chicka?”

“How did you know something was wrong?” Evie felt a brief flare of hope. “Did the fairies tell you?”

Something thrummed deep inside Evie, a tiny thrill of recognition. It happened every time she heard Addy or Brand mention Ansgar’s name, which was weird since she’d never met the guy.

“Brand’s brother?” She shook her head in confusion. Brand Dalvahni was Addy’s darkly handsome, intimidating, demon slayer boyfriend. The guy who saved Addy from certain death at the hands of a rogue demon and put her through the Change, as Evie and Addy referred to the infusion of demon slayer essence that transformed Addy from a human being to Something Else. An immortal super chick with lightning reflexes, stealth speed, and a buttload of Dalvahni sex appeal. “How did he know about Meredith?”

“Meredith?” Addy’s eyes narrowed. Addy
hated
Meredith. “What’s she got to do with this?”

“No, he didn’t tell me anything. Just showed up at the shop and started ordering me around in that arrogant way of his. You know what a hemorrhoid he is.”

Addy looked oddly flustered. “Oh, yeah. I keep forgetting. Trust me when I say he’s irritating as all get-out. Anyway, he says you need me, and then he disappears. So, what’s going on?”

“Oh, Addy.” Evie buried her face in her hands. “Meredith is dead.”

“Somebody killed her. In
my
office. I found her this morning when I went in to work.”

Addy sat down on the steps and put her arm around Evie’s shoulders. “Are you sure, babe?”

“I’m sure. I saw it.” Raising her head, Evie shivered. “It was awful. There was blood everywhere. And she had my letter opener buried in her chest.” She clasped her shaking hands together in her lap. “My office, my letter opener. Remember Meredith’s little scene in the flower shop two days ago, the one where she accused me in front of God and everybody of sleeping with Trey? People will think I did it.”

“The Death Starr’s dead? I can’t believe it.”

Evie winced. Since middle school, she and Addy had called Meredith the Death Starr because of her ability to zero in on people like a super laser and annihilate them in one fell swoop. But now that she was dead, it didn’t seem respectful to call her that.