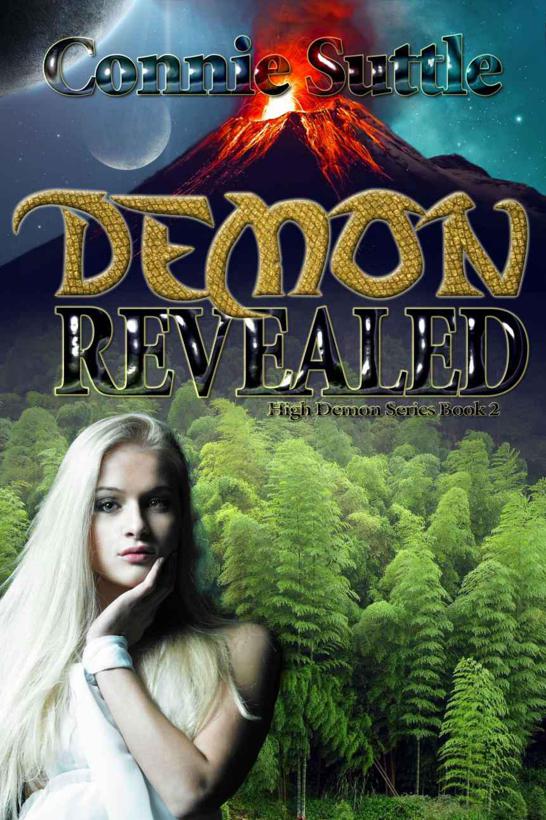 For Walter and Joe, as usual.

And for Lissa and Reah's fans everywhere—many, many thanks
to all of you!

This book is a work of fiction. Names, characters and
incidents portrayed within its digital pages are purely fictitious and a
product of the author's imagination. Any resemblance to actual persons (or
vampires, werewolves, High Demons, Larentii, shapeshifters, Ra'Ak, wizards,
warlocks or gods) living or dead, is purely coincidental.

This book, whole or in part, MAY NOT be copied or reproduced
by electronic or mechanical means (including photocopying or the implementation
of any type of storage or retrieval system) without the express written
permission of the author, except where permitted by law.

"Reah and I talked about it—that's how I know." Gavril
wanted to shout at the adults. Reah had tried to tell Lendill Schaff about Nods
Whitlin, but he'd ignored her, sure that Nods was only an illegal immigrant on
Tulgalan. "She said there was no water shortage on Mandil. They were
growing citrus in the desert so there was plenty of water to grow drakus seed. We
pieced it together—she said somebody called the High Commander could have been
in on this." Gavril sat in front of his mother, his father, ASD Director
Norian Keef and Vice-Director Lendill Schaff. "She didn't contact you a
second time because she was embarrassed after the first time." Gavril knew
that feeling all too well.

"Whitlin won't be able to talk for a few days—Tory nearly
crushed his throat," Norian grumbled. "Those wizards are refusing to
talk—we can't force them. They're older than that stupid boy; I'm hoping Nods
will get upset and frustrated enough to tell us all he knows. As soon as he can
talk."

"The most powerful of them keeps asking about Reah. He stopped
talking when I told him she wasn't any of his business." Norian was angry about
the entire incident. Lendill had ignored Reah's warning; she hadn't had enough
courage to come to him again. Ry hadn't thought the information he'd gleaned
was serious enough to call in agents and seven people died. Another eight were
wounded.

"But how are they getting to Tulgalan?" Lendill knew
he'd miscalculated—he should have gotten at least one agent to tail Nods. He
might have learned a great deal from that. Instead, they were left to clean up
bodies and attempt to explain to the Governor of the Realm on Tulgalan why a wizard's
battle had destroyed half of Taritha Village.

"I would have made the same mistake," Norian sighed.
"She's only nineteen. We didn't give her enough credit."

I ached. All over, I ached. The pain wasn't unbearable now, but
it had been. I remembered waking up occasionally; the pain had been so bad. I
only recalled cool fingers against my feverish forehead before blessed
blackness came again. A voice, now, asking me to wake. Calling me darling. Not
Aurelius—he never called me that. I was attempting to puzzle it out in my foggy
brain. That hurt, too.

"Aurelius is out on assignment again. I am here, pretty
one." I was afraid to open my eyes. Afraid of the reality I might have to
face when I did. Perhaps someone would come to send me back to unconsciousness.

"No, darling. They'll relieve the pain, but you must wake.
You must move and eat and answer questions."

"Hush, now. We'll get you through this."

"Wylend, go away."
That
voice I'd heard
before. I was trying to connect it to a face and a name.

"Karzac, if that order came from anyone else, I would
turn them into a goat." I opened my eyes a crack to see Karzac the healer
glaring at Wylend Arden, King of Karathia. Why was Wylend here? Surely, he
didn't want me to cook for him that badly.

"I will explain it to you very soon," Wylend rose
from his seat beside my bed, returned Karzac's glare and disappeared.

"Reah," Karzac sighed heavily, "I know you are
in pain. I will try to relieve as much of it as I can, but the one who calls
himself the Director of the ASD is clamoring to speak with you. I did my best
to hold him off, but he keeps insisting that the ASD owns you. That I find
repugnant in every sense of the word and have considered asking a Larentii to
put him through the pain you have suffered, just so he will have some idea of
what he is asking of you." Karzac's green-gold eyes were kind as he
reached out to touch my shoulder. The pain lessened. He put his hands on my
neck, then, causing the pain there to drop dramatically.

"Bro, I have no idea." Ry watched his taller sibling
carefully. Lissa had asked Ry to watch Tory—he wouldn't be able to reconcile
his feelings with what his Thifilathi had done. He should have realized the
full moon was close on Tulgalan, and when he'd forced the Thifilathi to deal
with the shooter, it had taken over completely.

"Drink this." I saw the same cook was still working
for the Queen of Le-Ath Veronis, and he didn't look happy as he handed a drink to
me. It looked like mush.

"Reah, it's protein and berries. Drink it—it will help
with the headache." Karzac was still fussing over me—he'd folded me to
Lissa's private study, where I was scheduled to meet with Director Norian Keef
and Vice-Director Lendill Schaff. I felt awful and my nervousness made me feel
as if I'd heave up anything I might attempt to swallow. The cook disappeared through
the door and my hand shook as I lifted the straw to my lips under Karzac's
watchful gaze.

"Healer, we'd like to interview our agent in
private," Vice-Director Schaff told Karzac the moment he and Director Keef
swept into the room.

"You are telling me this because I am Lissa's mate, just
like the Director here," Karzac snapped. Lendill Schaff received a daunting
glare, in addition to formidable sarcasm from Karzac. "Be assured I can
make your life just as much hell as the Director's here," the healer
muttered and folded away.

"I don't know what to do about that," Norian cut his
eyes toward the space where Karzac disappeared, raked a hand through thick,
brown hair and sat on Lissa's office chair with a sigh. Lendill Schaff sat on
the edge of Lissa's rather large, hand-carved desk and crossed arms over his
chest, staring at me. I quailed before his gaze and set my drink aside—I no
longer had enough strength to hold up the glass.

"Reah, you should have brought me the additional information—Gavril
told us what you came up with," the Vice-Director snapped, his dark eyes
boring into mine. "That was information the ASD needed to revise our
records and update the information you'd given me before. Clearly, I would have
taken a closer look at young master Whitlin had you done so. Yet you withheld
that information. I don't care how embarrassed you were at calling me the first
time, or how reluctant you might have been to contact me a second time. Had you
shared your information with Rylend, he could have brought it to my attention. You
did not." Lendill was angry. I felt dizzy and ill.

"Now," Lendill went on, "we have one of our
prisoners asking for information on you. Considering that you failed us in
this, we are going to escort you to the dungeon, with the hope that seeing you
will jog wizard Bel's memory a little." I looked up at Lendill in alarm. What
were they going to do? I was in no shape to walk to the dungeons. I couldn't
even walk across the room. I also had no desire to be a part of a coerced
confession from Bel—I still cared about him. He hadn't shot me—in fact, Bel had
been trying to stop Nods when Ry and Wyatt attacked him.

"We will hold you up if you have difficulty
walking," Lendill must have seen the look on my face. He wasn't going to
put his hands on me. I didn't want his hands on me. Right then, Karzac or one
of the Larentii might have been the only male hands I would allow. I struggled
down the hallway, jerking my elbow away from Norian Keef and teetering
dangerously as we reached the stairs leading to the dungeon. There wasn't
anything left in my stomach to heave up; otherwise I might have stopped to do
so halfway down the steps. My breaths were short and labored by the time we
reached the bottom, where a wide, flagstone floor lay outside the row of cells inside
Queen Lissa's dungeon.

My vision grayed and I struggled to clear it as we walked down
the flagstone-lined hall. Bel had been placed inside a cell about halfway down.
"Reah?" His voice was barely a whisper as I lurched to a stop before
the bars holding him back. He was leaning against a wall of his cell near the
bars. I saw he didn't touch the bars—likely they were spelled, preventing Bel
from using his power.

"Bel?" I wanted to weep, but there weren't any tears.
My voice was dry as sandpaper.

"Thank the gods, Reah, I thought you were dead." Bel
bumped his forehead against the wall and closed his eyes.

"We might be persuaded to keep her alive—if you consent
to tell us what you know," Lendill now had my neck gripped in his hand. That
brought a pain-filled whimper—the puncture wounds where Tory's teeth had
penetrated my neck were still blazingly painful.

"You have no right to demand anything!" Lendill
shouted back. "She is our conscript—we can do what we please with her. Tell
us what you know!" He removed his hand from my neck and gripped my right
shoulder, just where the ranos-shot had entered. And then he shook me—hard. I
shrieked, dropping to the floor in excruciating pain. Then I began to convulse.

Consciousness can be a fleeting thing—I was aware for brief
moments and during those moments, I realized I had no power over my body. None.
It was jerking uncontrollably. At times, I saw the lights in the ceiling
overhead in blurry brightness, at other times I saw the shoes Director Keef
wore. All while my body jerked in spasms that I couldn't stop. My teeth clacked
together and I bit my tongue several times. I heard shouting. Men's voices. Men.
They had brought me to this. All my life, men had controlled me in one way or
another. My mother had died, leaving me alone and unguarded. Perhaps her lot
hadn't been that much different from mine. I don't know how long the seizure
lasted; I only know that unconsciousness came after what seemed an interminable
amount of time.

"Do not attempt to give me excuses. I am a breath away
from killing you both." Kifirin stood before Norian Keef and Lendill
Schaff. "I care not that you were attempting to get information the only
way you could. Do you wish to go and explain that to our little one in there?"
Kifirin flung an arm toward Reah's bedroom. It had taken two Larentii, with
Karzac helping, to get the seizures to stop. Karzac had yelled first, before
Kifirin arrived. They hadn't waited for her to drink the protein smoothie—it
was liberally laced with sugar. Reah had been dangerously hypoglycemic and
that, combined with the stress, the forced walk to the dungeons and Lendill's
pain-inducing grips had triggered the seizures. "If the Larentii hadn't
come, she would be dead now. Is that what you wanted?" Kifirin blew angry
clouds of smoke as he glared at Norian and Lendill. While it was dangerous if
any High Demon blew smoke, when the god of the Dark Realm produced his smoldering
breath, lives hung in the balance.