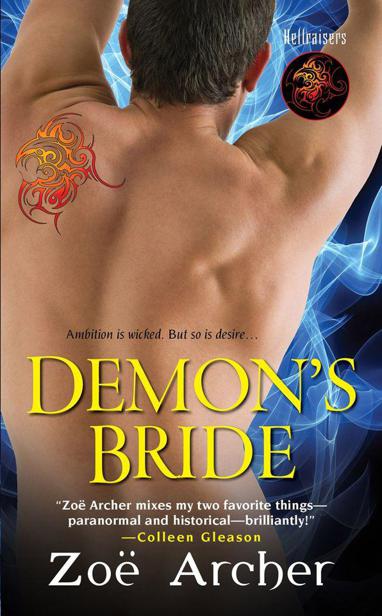 WAS HE ... AS AFRAID AS SHE?
Now, for the first time, she and Leo were truly alone. Silence stretched out, interrupted only by the popping sounds of the fire.
Just look at him, Anne. He’s only a man.
More than that, he was her husband. Therein lay the crucial difference.
Go on. Look at him.
Slowly, Anne lifted her gaze. She started a little when she saw that Leo stood at the foot of the bed. She hadn’t heard him move. Perhaps he had removed his shoes? She fought the absurd urge to peer over the side of the bed and see whether he was merely in his stockings or shod.
They stared at each other. More surprising than finding him standing so close was the glimmer of trepidation in his eyes. In the brief time she had known Leo, not once had he looked anything less than confident. It was a shock to see this extremely hale and potent man uncertain.
Was he ... as afraid as she?
Books by Zoë Archer
The Blades of the Rose
Warrior
Scoundrel
Rebel
Stranger
The Hellraisers
Devil’s Kiss
Demon’s Bride
Published by Kensington Publishing Corporation
D
EMON’S
B
RIDE
The Hellraisers
Zoë Archer