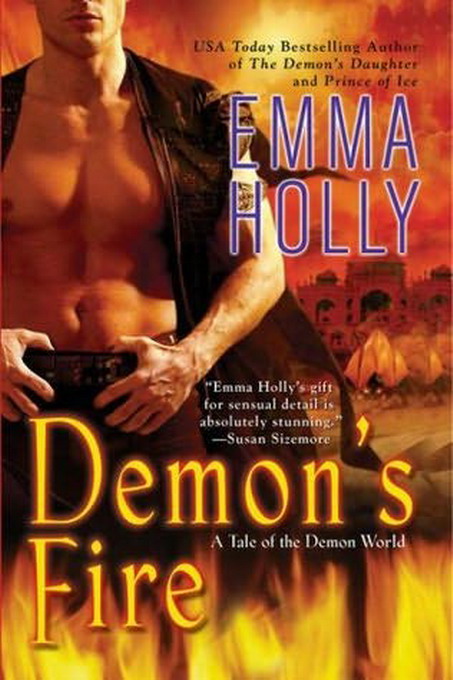 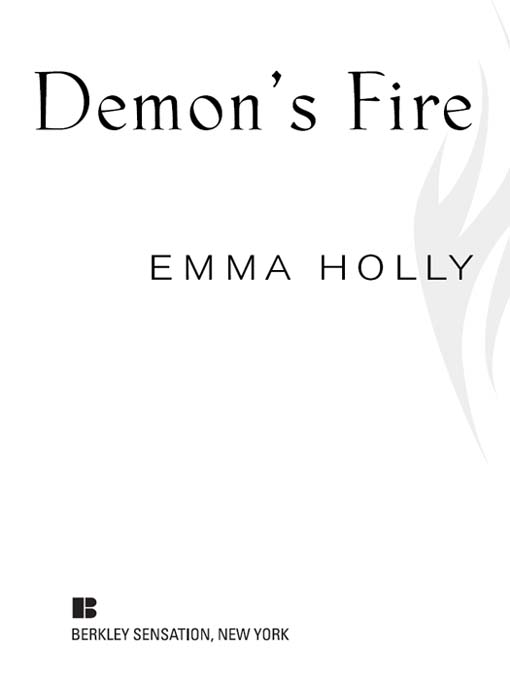 “An entertaining historical romantic suspense fantasy…What makes Emma Holly’s tale so powerful is that fans from several genres will believe in this alternate Victorian world.”

“Holly has created another gripping story…that gives the reader something to think about after the last page is turned.”

“A wonderful, heartwarming book…fresh and detailed, impossible to put down.”

“Sets the standards on erotica meets paranormal…will have you making a wish for a man with a little wolf in him.”

“Emma Holly has created a whole new world…erotic and extremely sensual. [She] is taking her place in the paranormal genre.”

“Holly has two great strengths: great sex and wonderful sentimental stories—whoever thought that those two could be successfully combined?”

“Holly brings a level of sensuality to her storytelling that may shock the uninitiated…[A] combination of heady sexuality and intriguing characterization.”

“An excellent mixture of eroticism and romance.”

“A complex plot, a dark and brooding hero, and [a] charming heroine…a winner in every way. Go out and grab a copy—it’s a fabulous read…A treat.”

ALL U CAN EAT

HEAT OF THE NIGHT

BEYOND THE DARK
(with Angela Knight, Lora Leigh, and Diane Whiteside)

No part of this book may be reproduced, scanned, or distributed in any printed or electronic form without permission. Please do not participate in or encourage piracy of copyrighted materials in violation of the author’s rights. Purchase only authorized editions.
BERKLEY SENSATION is a registered trademark of Penguin Group (USA) Inc. The “B” design is a trademark belonging to Penguin Group (USA) Inc.

To my fans,
because you make it
that much sweeter.

He hadn’t known what was happening when the guards slipped into his rooms at the Purple Crane. Breaking into a pillow house was no great feat, but these men were professionals. Silent as the grave, they’d worn no livery, their all-black outfits bearing no identifying marks. Prince Pahndir’s first thought was that his family had finally decided to make good on their pretense that he was dead.

His second was whether he minded.

But it wasn’t his day to die. The guards informed him he was coming with them, then led him—without explanation—to an aircar that had been fitted out to look like a food delivery airvan. It set down on the roof of Midarri Palace, a place he’d only ever seen from outside. His family hadn’t been as high on the royal ladder as that of Buttercup’s prince.

The thought of her tightened the muscles above his breastbone. Buttercup must have had something to do with his rescue from the pillow house, and he was far from sure that was a good thing. He’d heard her fellow students talking about her arrest, but had only gotten pieces of the story. Madame Fagin had been uncustomarily nervous since the event, snapping at her students and working girls alike. It was as if she were hoping her former pupil would be executed, and—for some unfathomable reason—feared the consequences if she were not. Pahndir supposed his liberation from the madame’s care meant the trial had gone Buttercup’s way.

Somehow, he doubted the silent guards would confirm this if he asked.

Before he could attempt it, they were transferring him from the delivery van to a private aircar, which was emblazoned with the Midarri crest. Normally, it would have seated eight in luxury, but the seats had been removed to make room for a pile of plastic packing crates. The guards withdrew once he was inside, with the exception of the youngest one.

“We’ll move you to another flyer for liftoff,” he said. “Some of the other cars were compromised during an incident this afternoon, but the security systems in this one are fine. You’ll be safe as long as you don’t unlock the door.”

Safe from what?
Pahndir thought as the door slid shut behind his last companion.
And safe
for
what?

He could have cursed Buttercup for involving herself in his affairs. What happened to him hadn’t mattered in a long time. His body’s reactions to her were nothing more than a stirring of physical urges that hadn’t had the decency to die with his wife. He cared about Buttercup just enough to wish her far away from him.

That long-ago night in Madame Fagin’s parlor, watching through the hidden portrait hole as the girls lined up, he’d seen Prince Corum’s eyes go black. Pahndir hadn’t been certain Cor and Buttercup would be mates, but he had sensed their relationship would be rare. He’d wanted Buttercup to have that. Only she, of all of Madame Fagin’s students, had treated him like a man. She shouldn’t be jeopardizing her future by championing his cause. If he’d wanted it championed, he’d have fought for himself. As it was, he’d discouraged her as cuttingly as he could from giving him a second thought after she left.

It had been the only act he’d been proud of in years. And now it seemed it hadn’t worked.

He pressed his temples between the heels of his palms. Couldn’t she see his family had been right to fake his death and send him into servitude? Thallah’s suicide had exposed his fatal weakness, making it obvious to anyone who met him that he’d never survive the cutthroat world of royal life. He was damaged: He grieved, while others buried their hurt in decent Yamish ice. Pahndir couldn’t lead his own second-tier family, much less take over a powerful one like the Fengs.

If Buttercup had ruined her chance for happiness by helping him, he’d never forgive himself.

He didn’t know how long he stood there, wondering what in creation he could do that wouldn’t make matters worse. As much as an hour might have passed. Though the aircar’s cabin windows were opaqued for privacy, the change in the light told him winter’s early dusk had arrived.

It occurred to him that the guards had not come back to move him to another car. Had something happened to rob them of the chance? They’d seemed too professional to forget, but maybe his disappearance had been noticed, and they didn’t want to risk discovery with more contact. He hoped they’d warned whoever’s vehicle this was that he was here…unless they’d decided to give the owners deniability about their stowaway.

With that possibility uppermost in his mind, he heard footsteps coming up the outside ramp.

He moved with the quickness any royal prince could call upon. Mere seconds were required to lift the stretchy web that secured the crates and make a cave for himself between them. He was well concealed, if not comfortable, by the time Prince Corum and Buttercup walked in.

It was immediately obvious they had no idea he was there. The sound of their openmouthed kisses was a plague he could have done without. Robes were torn off and thrown, endearments exchanged, then overtaken by sighs and moans. He knew the instant the prince slid inside his partner. That groan of relieved entry was one he’d made himself countless times.

When one was a solitary, with only one mate in all the world, the word
relief
took on a new meaning.

To judge by the ensuing, breathless conversation, Cor and Buttercup were mates after all—and joyous ones. Though Pahndir had wanted a future like this for his friend, knowing she had it hurt all the same.

That had been a breach of trust he still didn’t understand.

His body woke at the memories, but even more at Buttercup’s extremely aroused nearness. He knew she was part-human; that bit of news had reached him. He supposed this was why her chi was so intoxicating, why it had made him feel he could almost come when she stroked him. Her energy teased him now. His heat was days away, but—as had happened so many times at the pillow school—he felt her presence spur it on early.

He lifted within his clothing, thickening, stretching, growing heavy with blood and lust. Images clawed unbidden through his mind: tearing Prince Corum off his beloved, taking his place between her legs, plunging into Buttercup so hard she screamed.

In the end, the desperate pounding of his cock was too much to bear. He’d been deprived of true release for too long—through every heat since Thallah died, through every class of students who tried to devise new ways to “get a rise” from him. No matter that the drive for sex wasn’t that different from the drive for life; some dark and bestial corner of his soul was perfectly ready to betray his one great love. His soul was exhausted with just surviving. It wanted to mate again.

He shoved his hand into his trousers and gripped himself. Up and down he rubbed his aching erection, his fist so tight the pressure burned his skin. He didn’t care. The moans outside the boxes increased in volume, the eager slapping of flesh to flesh. If he couldn’t join them, by Infinity, he could lose himself in their lust. At the least, he knew his orgasm would be good. All living beings radiated extra etheric force at climax, and from what he’d tasted of it already, Buttercup’s was sure to be sweet.

He timed his strokes to match their excitement—faster, tighter, and then their mutual peak was there. The prince and Buttercup cried out hoarsely, the energy of their orgasm rolling over him like a hot, moist wind—a palpable shock wave of ecstasy.

He was not prepared for the intensity of the effect. His sensations peaked beyond any he could recall, his balls contracting as if a large, strong hand had slapped them to his root.

He tensed, throttling back a scream. This couldn’t be happening. This was too much. Too good.

His body overruled his mind’s objections. Deep in his groin, gates that had been tightly shut fibrillated wildly and flew open. His own sexual essences flooded him too quickly for him to muster the least defense. Heat rushed through his cock and burst violently over his hand. For the first time in seven years, Prince Pahndir spilled his semen.

When it was over, he gulped for air as quietly as he could, his relief as momentous as his shock. However this miracle had happened, he knew what it meant: His curse was broken. He was alive again.

And he didn’t have the faintest concept what to do about that.