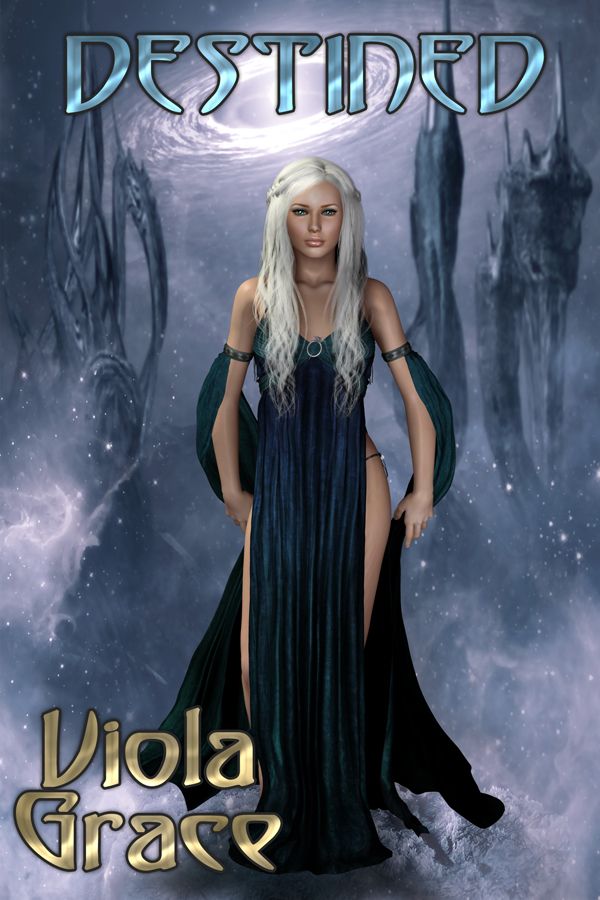 An artist shows a hero his destiny, and it is her face he is looking at.

Rhoda works as a portrait artist, painting the destinies of those who sit for her. They choose their subject of wealth, success or love, and she paints their destiny. Most opt for love, and they pay handsomely to know their fate.

Nagged into sketching at a charity event, Rhoda finds herself facing Prince Drehl and his companions. When one woman opts for a sketch, she smiles at the image of her destined mate and carries the sketch away as if it were a precious treasure.

As she completes the sketch for the prince, Rhoda sees her own features as well as his alter ego, and she tries to blur the page before she shows it to him.

Charm of the Yacaro Guardians is amused by her reaction to him, and when he repairs the damage she did to the sketch, he knows why she was so skittish. She is his destiny, and he will not let her get away.

She is on his world and no one can escape him on his home turf.

Rhoda Evergreen hugged her sister and smiled. “I will be fine. Trust me.”

Pansy Evergreen looked Rhoda in the eye and said, “You are not infallible. I mean, look at the match you drew for me.”

“Pansy, I drew a man with dark hair. You wanted it to be Drew. None of the other characteristics in the drawing were found in your dear ex-husband.” Rhoda smiled and stroked her cheek. She looked to the crowd beyond, all the men and women saying farewell to the Volunteers that had been chosen to leave and represent Earth in the unlimited span of the Alliance.

“You are an artist. What use can you be to aliens?” Pansy made a last-ditch attempt to change her mind.

“The same use I can be for you. Pardon me a moment.” She smiled and crossed to the man she recognized from her own drawing. She tapped him on the arm, and he jumped, startled.

“Yes, what can I do for you?” He had the most wonderful, kind chocolate-brown eyes, and he looked over her with curiosity.

“Are you here sending someone off?”

“My brother. He just left for his press conference.”

“Well, my sister is going to be on her own, and I was wondering if you would consider taking her for a cup of coffee?” Rhoda smiled and batted her lashes.

“I am. I am one of the mere mortals with a simple talent that the Alliance deemed useful. I am about to get my final briefing and head to the shuttle, but I don’t want to leave Pansy alone. She’s a little upset.”

He gave her a wary look. “Is she crying?”

He gave her a slow grin. “I can sympathize. Please, introduce me.”

Rhoda sighed in relief and went to introduce Pansy to the man that Rhoda had sketched ten years earlier. This man was Pansy’s destiny, and Rhoda was glad that she was here to see the initial introduction. It took a weight off her mind that her sister was going to be with the man she could love and who could love her in return.

Jemyalli looked deep into Rhoda’s eyes. “Please? I am begging you. We need an artistic kiosk at the gala to get the donations. Please? You only need to do sketches, and the centre will not allow anyone to press charges.”

Rhoda looked away from her friend’s red eyes. “How can you be sure of that?”

“They have to sign a waiver before they can enter the gala. There are a few other kiosks that could be dangerous.”

Rhoda looked around at all the canvases that she had waiting in various stages of completion. Portraits were how she made her living on Yacaro, an Earth-style planet in the Nyal Imperium. It was a fairly good living too, she had her own home, an attached studio and plenty of time to spend with friends.

The problem with friends was that now and then, they wanted favours.

“Fine. I will do it. Only sketches, no commissions.”

“Whatever you say. Give me a list of supplies and furnishings, and it will be there. You know that it is formal?”

“It is a gala at the art centre. Of course it is formal.” Rhoda smiled and scrubbed her hands. “What you are really saying is that you want to make sure I am dressed appropriately.”

“Something like that. If you don’t have something proper, I will arrange an emergency delivery for you.” Jemyalli grinned.

Sighing, Rhoda took her friend to the wardrobe, and she swung it wide. “I have to box up a portrait for Lord Aythingar. You can just pull anything that you find suitable, and I will put it on. Make sure the sleeves won’t drag on the drawings though.”

Jemyalli smiled. “You have trust in me.”

“I do. I also know that you don’t want me looking like a fool. I trust your judgement.” She returned to her studio and started to box up the portrait that would have made her exceedingly uneasy back on Earth. Lord Aythingar was standing and his wife was kneeling at his feet, a jewelled mask covering both eyes and sloping down on her cheeks. For a human, it would be a degrading posture, but for a Nyal, it meant that his woman was in heat and the mating mask was being employed for the wedding night.

Societal differences were slightly skewed in a society where the women went into heat and the men bid on the right to be theirs. It had taken Rhoda three years, but she was finally used to what the Nyal considered normal.

It was a far cry from church picnics, but it worked for them, so she wasn’t going to sneer at their practices. As she slipped the portrait into the custom case that she had had made for her canvases, she looked toward the other room. Jemyalli had one year left before she would end up mated to some man she barely knew. Rhoda had offered time and again to do a portrait so that her friend would be aware of what her mate looked like when she saw him, but Jemyalli didn’t want to know quite yet.

When Jem went into heat, she would be auctioned off to the highest bidder and that money would become hers after a percentage went to the auction house. To have to face down her purchaser knowing that he was the one she was destined to be with might skew her reactions. She wasn’t willing to risk it, and Rhoda respected that.

Humming to herself, she nailed the crate shut and addressed the label for delivery. His lordship was sending a courier, but it never hurt to put a mark on the work, just in case.

“I have it!” Jemyalli came out of the bedroom with fabric draped over her arm. “This is perfect and ever so sexy. If they don’t stop for the drawing, they will definitely stop to flirt.”

Rhoda groaned. “Jem, you know I am not hunting for a man. I have had a few since I left Earth and none of them were worth a repeat.”

“You aren’t trying hard enough. Come on, cheer up and go hunting. You don’t know what you will find.”

Rhoda looked at the gown that Jem held. If she used that as bait, the only thing she would catch was a pervert after some alien tail. The dark gown was fitted, wrapping her tightly from breast to mid-thigh. Tiny sleeves were actually drapes that would leave her shoulders bare, and the gauzy fabric promised men that if they stared hard enough, it would go transparent.

“I may as well just go naked.”

Jemyalli looked down at the fabric. “Really? Well, I suppose we could pass it off as a societal peculiarity of your species if you wanted to.”

Rhoda grabbed the dress and walked it back to her bedroom, draping it across the bed. “You have no sense of sarcasm.”

Jem laughed. “I do, but it plays better if I stay solemn. Wear the gown. It is perfect.”

Rhoda looked at it and groaned. “It makes me look like a Martian hooker.”

“Countess Nefry. She gave it to me after I did her portrait, and she was able to narrow down her destined mate.” She shrugged. “It was an easy image, though it made me a little uncomfortable to paint.”

Painting a woman being held so tightly against the huge, tattooed bulk of Lord Erkinal with both of them naked had been a little shock to wake up to. She was glad that her talent let her zone out and she woke up after the image had been generated. Some of the couples and groups she had painted left her queasy and occasionally aroused.

“So, what time does this thing start tonight?”

“You have four hours. Where is that list?” Jem grinned.

Rhoda scribbled her supply list, including drawing tablets and hand wipes. She handed it to her friend and shooed her out the door. “Go. I will be at the centre in four hours.”

“Make it three and a half. You will need time to set up.” Jemyalli cackled wildly as she got into her vehicle and her driver took off.

She sighed and leaned back on her doorframe before shaking her head and returning to box the finished commissions. It was good that she was making a name for herself here, but she wished that it wasn’t usually prefixed by a curse word.

Not all men and women enjoyed seeing the actual person or persons that destiny had in mind.

The gala was heavily formal, and Rhoda had to admit that she was glad she had dressed up. There were people milling around who owned whole planets and the mining rights to asteroids.

“Is it done?” The young woman was nervous as she sat on the chair provided for the clients.

Rhoda finished the sketch and nodded, tearing it from the pad. “Here you go. It is only a rough estimate, but you can make up your own mind as to its validity.”

She turned the paper so that only the young woman could see it and violent colour came to her cheeks as she bit her lip. “Thank you.”

The image on the paper was a ménage, but two women were front and centre with a man in the background. The young debutante was the central figure with the other two worshiping her. It was not the standard Nyal image, but the figures with the young lady in the sketch were not Nyal. Their spikes and horns suggested that they were one of the hundreds of species that Rhoda hadn’t met yet.