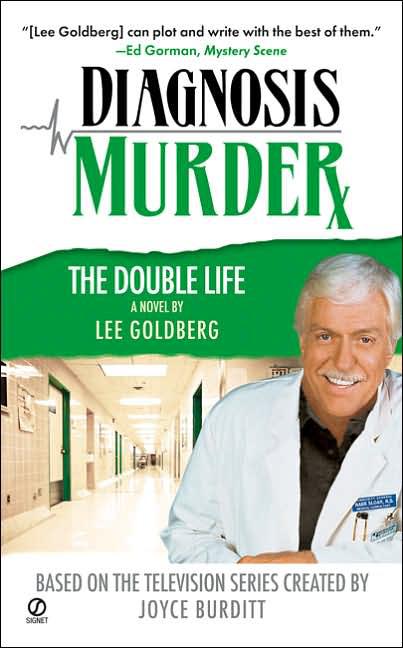 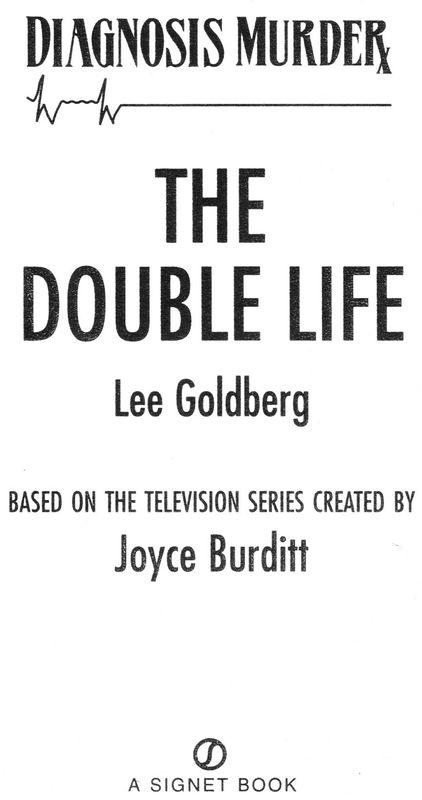 I would like to thank Dr. D. P. Lyle for his friendship and his invaluable medical advice and Jack R. Parker for sharing his experience on autopsy practices.

This book would not have been possible without the enthusiasm and support of William Rabkin, Tod Goldberg, Kerry Donovan, and, most of all, my wife, Valerie, and my daughter, Madison.

I look forward to hearing from you about this book, or any of the previous novels in the series, at www.diagnosis-murder.com.

Dr. Mark Sloan believed in ghosts. Not as disembodied spirits of the dead haunting the mortal world, but as shadows of the living that linger in the places we go and the things we do.

He never saw the ghosts, but in his role as a special consultant to the Los Angeles Police Department, there came a point in every homicide investigation when he sensed their presence.

They lurked at the edges of his awareness, as if he were sitting in a dark room, his back to the door, but with the creeping certainty that someone was standing behind him. There was always a palpable change in the air, a displacement created not by physical movement but by the tremor of intent and the rumble of imminent death.

The ghosts that haunted Dr. Mark Sloan were the murderers he pursued. He rarely felt them while he was working a crime scene or examining a corpse. Observing stark evidence of the murderer's brutality or pleasure, rage or intellect, remorse or glory, wasn't the same as actually feeling his physicality, sensing it all around like a low, barely audible hum.

Mark would methodically conduct his investigation, interviewing witnesses and suspects, studying evidence and assembling disparate facts, waiting for that moment of skin-crawling awareness when he finally felt the breath of his adversary on the back of his neck.

In that instant he always felt fear and dread. But he also felt a dark glee—the thrill of the hunt. He knew himself well enough after sixty-some years to admit without guilt that it was this jolt as much as anything else that drove him to do this ugly work, a calling that was as vital to him as his medical career.

Of course, whenever he embarked on a homicide investigation, he knew there was a killer out there even if he hadn't yet
felt
his existence. So when the moment came, it was never a surprise. He expected it. He welcomed it.

This time was different.

His investigation didn't begin with a murder. It began with a coincidence at Community General Hospital in West Los Angeles, where Mark was the chief of internal medicine. He had a nagging instinct that something wasn't right, that somehow the natural course of events was out of balance, tipped by an invisible hand.

The more he had looked into things over the past couple of days, the more his uneasiness had grown, taking on shape and substance. That morning, he awoke fully alert in the predawn darkness of his bedroom, hearing only the gentle lapping of the waves outside his Malibu beach house. But he strained to hear something else, the sound that had awakened him.

The sound wasn't outside. It was the pounding of his heart. It was the rush of blood moving through his veins.

It was the awareness of a subtle shift in his environment. He wasn't alone. There was a presence with him now. A ghost.

It was a sensation so visceral that it raised goose bumps on his flesh and left him trembling. He had to fight the childish urge to pull the covers over his head and hide.

But he knew that wouldn't protect him. There was no escaping what haunted him. The killer felt close because he was lurking somewhere deep in Mark's psyche.

The identity of his adversary was hiding in the facts Mark already knew, waiting to be revealed in that instant of astonishing clarity when the thousands of bits of information he'd assembled aligned themselves like pixels to become a sharp image.

The key to making that alignment happen was recognizing some overlooked fact, by looking at what he knew from another perspective. Sometimes all it took was a word, a smell, or a specific image to make it all happen.

Feeling the presence of a killer was one thing, but proving he was there and catching him were quite another. That was Mark's mission today. He was determined to go through everything once more, to find the answers that eluded him.

He got out of bed, took a scalding shower, dressed for work, and was on the road by seven, driving south into the swirls of gray fog that drifted off the ocean and rolled over the Pacific Coast Highway, lapping up against the bluffs of Santa Monica like the surf.

He exited the highway in Santa Monica and climbed the steep California Incline, the aging roadway up to Ocean Avenue that was carved out of the eroding cliff decades ago and reinforced with poured concrete. The California Incline always struck Mark as a grandiose name for something as mundane as a retaining wall with a road on top.

Once he got onto the palm-lined Ocean Avenue, the Champs-Elysees of homelessness, he turned left onto Wilshire Boulevard. The street was choked with traffic as far east as he could see, turning what should have been a straight shot to Community General Hospital into an agonizing crawl. Mark didn't bother taking one of the many elaborate alternate routes on residential streets, knowing they were just as bad, a jittery journey between Stop signs that gave the illusion of faster movement but the reality of motion sickness.

Sitting behind the wheel of his rented Ford Five Hundred, Mark was frustrated and impatient, acutely aware of his hard plastic surroundings. The car also had faux burled walnut trim seemingly designed by someone who'd
heard
about wood but had never actually
seen
any.

The slow-moving cars crowded around him. He could feel their pressure, as if the walls of his car were crushing in on him. He choked on the exhaust fumes that seeped into the cabin despite the closed windows and sealed vents. But most of all, he felt the killer in the car with him, sneering at his discomfort and powerlessness.

Murder gives you power, Mark. There 's nothing else like it. You ought to try it sometime. You'll feel great.

He glanced at the empty passenger seat. Was this the ghost of the killer whispering to him or the collected shadows of all the murderers he'd pursued? Or was it some nightmarish aspect of his soul? He wondered then, as he often did, if it was really possible to come face-to-face with so many killers and not be infected, even a little, by their evil.

Not so long ago, Mark was shaken by the discovery that one of his closest friends, a doctor he'd known most of his life, was a serial killer. For decades, Mark's friend had spent his days relieving pain and suffering and his nights inflicting it. The revelation made Mark question many of his basic assumptions about life, about medicine, and about himself.

Over the last forty years, he'd been told many times that he had a gift for solving murders and capturing killers, a unique ability to see patterns and connections where others saw only a blur of information.

But what if his gift was actually a mutated curse? What if he was so good at catching killers because, at some level, he thought the same way they did? Or worse, was driven by the same desires?

Mark shared this fear with his forty-something son, Steve, an LAPD homicide lieutenant, during an evening walk on the beach.

"Of course you think like them," Steve said. "They're hunters and so are you. You just have different prey. And you don't kill what you catch."

"Several of the murderers I've caught have been executed," Mark said. "I watched them die."

"Only because they asked you to be there so they could enjoy one last act of manipulation, and inflict just a little more misery, before they died. You've never killed anyone."

"Not with my own hand." Mark knew his son had killed in the line of duty, but he'd never summoned the courage to ask Steve what it felt like.

"Did you enjoy watching them die?" Steve asked.

What about you, Steve? Mark thought. His son watched those executions unblinkingly, without the slightest hesitation.

When Steve killed someone in self-defense, those terrible experiences happened quickly, in the heat of battle. But Mark couldn't help wondering if Steve found it exciting, too. Was there just a little thrill involved? Was it the adrenaline rush of survival, or something darker?

Mark shook his head, more to clear his thoughts than to respond to Steve's question. "Witnessing those executions made me sick."

"That's what sets you apart," Steve said. "That's what makes you human and them inhuman. You've spent your career saving lives, not taking them."

Mark often thought about that conversation, about what was said and what wasn't.

His investigations had led to many murderers being imprisoned for life or sentenced to death. He wondered if he could pursue killers with the same zeal if he had to carry out the sentences himself.

He didn't find the answer to that question, or any others, during his commute that morning. When he finally arrived at Community General, he sped up to the second tier of the parking structure and pulled into his reserved spot, coming up just short of tapping his front bumper against the concrete pillar, the sure sign of a man in a hurry.

But despite his short, tiresome journey and a mild case of claustrophobia, he didn't hurry to get out of his charmless rental car. Instead he sat there for a long moment, disoriented and disturbed, as if he'd just this instant awakened instead of an hour ago.

It's nothing a hot cup of coffee and a surge of caffeine won't cure, he told himself.

Mark emerged from his car just as Dr. Jesse Travis strode out of the ER like a man who'd been released from prison. He was wearing a lab coat over his wrinkled blue scrubs, his hair was askew, and a day's stubble showed on his face. There was a surprising spring in his step, though, considering he probably hadn't slept much in the last twenty-four hours.

Many people were quick to misjudge Jesse, taking his boundless enthusiasm and boyish demeanor as signs of inexperience and immaturity. But in a medical crisis he became a different person, displaying a confidence and calm authority that eluded him in every other aspect of his life.

The two men, the mentor and his apprentice, met in the middle of the steep incline leading up to the next level of the parking garage.

"Is it that obvious?"

"I assume every shift is rough," Mark said.

"This was worse than most. I'd be glad to wow you with tales of my medical heroism, but I've got to get home. Susan and I only have a two-hour overlap before she starts her shift, and that doesn't give us much time to—"

Mark interrupted. "I get the picture."

Jesse and his wife, Susan, a nurse at Community General, were longtime lovers who were still adjusting to becoming husband and wife.