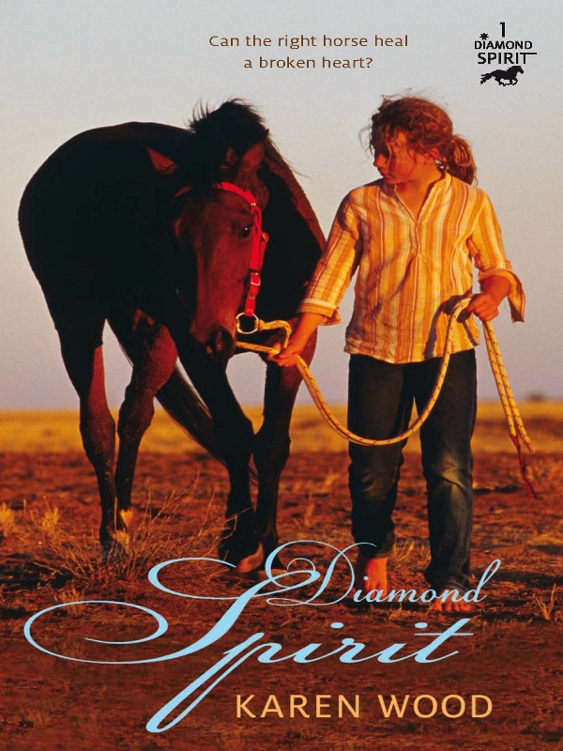 Cataloguing-in-Publication details are available from the
National Library of Australia
www.trove.nla.gov.au

For Shara Alisye, Jessica Tara, Jessica Rose
and Jody Grace.
You’ll always have a place in my heart.

Jess ran a soft brush over Diamond’s sides, making her gleam. The pony was a picture of health. ‘You and Rocko together, eating yourselves stupid for three whole weeks!’ Jess swapped the brush for a comb and began untangling Diamond’s thick black tail. Speckles and dots blanketed the pony’s Appaloosa rump and three distinct silver diamonds trickled down her hindquarters like falling stars.

Her phone buzzed and rumbled in her jeans pocket.

Jess grinned and looked to the top of the driveway, where Shara would appear any moment. She gave Diamond’s tail a few more quick strokes and then pulled the pony’s lead rope from the fence.

Shara was her buddy, her bestie, and the two of them had just finished a brilliant season at pony club, competing as pairs in mounted games. They had spent every weekend vaulting on and off their horses, stabbing balloons, diving through hula hoops and shuffling in sack races while their ponies cantered along behind them. They’d had heaps of fun and won a stash of ribbons and trophies, including second place at the state championships, and now their ponies would be having a well-deserved break down on the grassy river flats.

‘
Coo–ee!
’ Shara waved as she appeared around a bend on Rocko, her chunky chocolate-brown quarter horse: a total basket case she’d bought cheap from the saleyards. She wore shorts and her old black helmet with horse stickers all over it. Her thick, straw-blonde pigtails poked out either side of her moon-shaped face. Hex, her part dingo, and Petunia, her half-blind cattle dog, followed. Shara’s animals were a motley lot of stinky, bad-mannered rejects, but she adored all of them. They went everywhere with her.

‘Ready for a holiday, Diamond?’ Shara said, leaning over and giving the pony a rub on her golden neck. ‘Packed your teeny weeny bikini?’

‘And her sunnies and fake tan,’ Jess laughed. ‘I’m going to go crazy not riding for three weeks. Don’t know what I’m going to do with myself.’

They left the road and made their way down a grassy easement that ran between two properties, following a well-worn track to the first of many river crossings. The Coachwood River ran through the valley like a long, snaking highway, flanked with flat green pasture. The river flats had no permanent fences, but farmers often grazed their stock on the lush pasture using temporary electric ones.

‘I was thinking we should spend the next three weeks building a cross-country course down here,’ said Shara. ‘Dad could use the tractor to drag some logs out of the river.’

‘That’d be cool,’ said Jess, her eyes lighting up. ‘There are heaps more over by the sawmill. We could pile them up and make jumps out of them. No one would care.’

‘And I’m going to have a huge clean-up – my tackroom, all my gear, the feed shed,’ said Shara. ‘I’m going to get it all ready for the holidays.’ She ducked as she rode Rocko into the trees that ran alongside the river.

‘Same,’ groaned Jess. Her shed looked like ground zero. She would need to hire a bulldozer and a disaster response team to get it sorted out.

‘I might have to do some swotting, too,’ said Shara in a
just-letting-you-know
voice. ‘I’m going to apply for Canningdale College.’

‘Apply for
what
?’ asked Jess.

‘Canningdale – it’s the only school in Australia that does animal science in Year Ten.’

‘New South Wales.’ Shara gave Rocko a kick and pointed him straight down into a shallow crossing in the river.

‘
New South Wales?
’ said Jess. ‘What do you want to go there for? It’s full of cockroaches!’ She let Diamond stop beside Rocko to have a drink from the cool clear water.

‘So knit me some socks.’

‘But it’s so far away,’ said Jess, getting to the real point. ‘What would you do, go and live there?’

‘I’d board at the school and come home in the holidays.’

‘Hang on, I have to get a scholarship first,’ said Shara. ‘It’s all just an idea at the moment.’

‘Would you come home for weekends?’

‘No, too far.’ Shara gathered her reins as Rocko brought his nose up from the water.

‘So, no mounted games?’ It was almost unthinkable. ‘No riding?’

‘I’d take Rocko with me. It’s an agricultural school.’

‘I am. I mean, I’m not, I mean, I’m really excited for you, but’—Jess tried to laugh—‘who will I hang out with at school?’ It seemed such a stupid, selfish question. ‘Who will I ride with?’

‘I might not even get in, you know. The scholarships are really competitive; I’d have to be, like, in the top five per cent in the state or something. There’s no way Mum and Dad could afford it otherwise.’ Shara turned Rocko onto the open grassy flats. ‘It’s a long shot.’

Jess rode alongside, her brain whirling. Shara always came top of the class without really trying, but did that mean she was in the top five per cent of braininess in the whole of Queensland? ‘You’d have to be some sort of freaky super-nerd,’ she said.

‘I would,’ said Shara. ‘Probably nothing to worry about.’

‘You’d look good with a stethoscope around your neck, though,’ said Jess, trying to make light of it.

‘Reckon?’ Shara giggled and held out her arms. ‘I rather like the latex gloves, myself!’

‘Right up to your armpits,’ warned Jess.

Shara pushed Rocko closer to Diamond, and with a funny little reshuffle, hopped up onto her knees and then crouched like a frog on his back. She leapt sideways and landed behind Jess on Diamond. Then she wrapped her arms around Jess and gave her a squeeze. ‘Gonna miss me?’

Jess elbowed her off, hopped up into a crouch herself, and jumped over and onto Rocko. It was the best way to mount him, she’d discovered. On the ground he often tried to bite or kick, but if you could bypass the teeth and heels, he was fantastic to ride. ‘No, I won’t have to,’ she laughed and pushed Rocko into a canter. ‘You’re not that geeky!’

Before she knew it, Shara was galloping past her on Diamond, heels flapping. ‘Race ya!’

She did. Diamond kicked her heels up into the air, and with nothing but a halter and rope to hold on to, Shara went sailing through the air and landed in the thick grass, squealing with laughter. Diamond skidded to a halt as she had been trained to do when her rider dismounted.