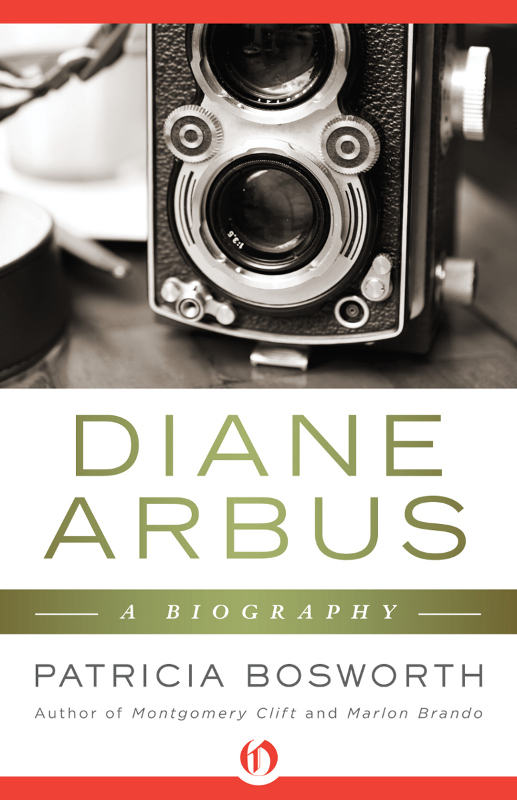 D
IANE
A
RBUS’ UNSETTLING PHOTOGRAPHS
of freaks and eccentrics were already being heralded in the art world before she killed herself in 1971. Then, a year after her death, the Venice Biennale exhibited ten huge blowups of her human oddities (midgets, transvestites, nudists) that were “the overwhelming sensation of the American Pavilion,” as the
New York Times
art critic Hilton Kramer wrote. Soon afterward, a large retrospective of her work opened at the Museum of Modern Art in New York and was both damned for its voyeurism and praised for its compassion; 250,000 people crowded in to see such haunting Arbus portraits as “The Jewish Giant” and “The Man in Hair Curlers.” Later the show toured the United States to acclaim and controversy and another retrospective was similarly received when it traveled throughout Western Europe, Australia, Japan, and New Zealand. Arbus gained an international reputation. Subsequently a book of eighty of her photographs was published by Aperture. Its overriding themes—sexual role-playing and people’s irrevocable isolation from each other—seemed to express the rebelliousness, alienation, and disillusionment that had surfaced in the sixties and flowed into the seventies. The book has since sold more than 100,000 copies.

It is possible that Arbus would not have received such concentrated attention had she lived, although it is generally acknowledged that her rough uneasy style (which combined snapshot technique with the conventions of heroic portraiture) did in any case have a seminal influence. She drastically altered our sense of what is permissible in photography; she extended the range of what can be called acceptable subject matter. And she deliberately explored the visual ambiguity of people on the fringe and at the center of society.

Back in the fifties her images were strictly one-dimensional. I met her then. When I was eighteen I modeled for her. In those days Diane Arbus was a fashion photographer in partnership with her husband Allan. They worked constantly for
Glamour
and
Vogue
and various advertising
agencies. They hired me to pose for a Greyhound bus ad. It was my first big booking.

I remember thinking, on that hot summer morning so long ago, that my carefully applied pancake makeup might streak my neck. I was terrified that even in my falsies, waist-cincher, crinoline petticoats, and shirtwaist dress—the standard uniform for a John Robert Powers model—I would be told that they’d made a mistake, that I was wrong for the job. However, the moment I entered the Arbus studio on East 72nd Street—a huge, cool echoing place decorated with an enormous green tree—a barefoot Diane ran over to me with outstretched arms. “Good!” she declared. “You don’t look like a model.” And then in a conspiratorial whisper: “That’s why we hired you.”

The rest of the day passed swiftly. We went “on location” (another first for me), driving to Ardsley Acres, a small town less than fifteen miles from Manhattan, and stopping at a dead-end road where weeping willows surrounded a pond. Until it got dark I posed, together with a male model who played my “date,” in front of an empty Greyhound bus, while between takes Diane fussed with my hair and murmured encouragement. It was Allan who took all the pictures (I learned later that he and Diane alternated shooting). She addressed him as “boy” and he called her “girl,” and they had an assistant, Tod Yamashiro, a young Japanese photographer from Chicago, who kept loading their cameras. The three of them seemed to have a warm, joking relationship, and by the end of the afternoon I was laughing and joking, too. Driving back to the city, I felt exhilarated as Diane plied me with gentle questions and then listened to my answers with such intensity I believed I had never spoken so articulately or been so well understood. (Later I discovered that Diane consistently had this effect on people. “When you were talking with her, she made you feel as if you were the most important person in the world,” says her old friend Stewart Stern.)

I worked for Diane twice after that, I think, and then when I became a journalist I continued to see her occasionally. We’d run into each other on the street and have long, rambling conversations. Once we sat in a coffee house while she told me she’d left fashion and was “doing her own thing,” photographing strangers on Coney Island. Another time, riding together on the up escalator in a department store, she informed me that she’d won a Guggenheim, which would enable her to travel around the country photographing “events” and “celebrations.” She had just photographed a beauty contest at a nudist camp in Pennsylvania, she said. I subsequently recognized one of the pictures from that take when I saw it along with other of her portraits—a woman with a cigar, kids dressed as grownups, grownups dressed as kids—at the Museum of Modern Art. They were part
of a 1967 show called “New Documents,” a crucial exhibit because it marked the end of traditional documentary photography and introduced a new approach to picture making, a self-conscious collaborative one in which both subject and photographer reveal themselves to the camera and to each other. The result is a directness that pulls the viewer smack into the life of the image.

By 1978 Diane Arbus’ stature as a preeminent photographer was unquestioned—she was linked to Walker Evans and Robert Frank in importance—and yet nothing had been written about her life, although it was obvious that behind her pictures lay a strange and powerful person.

She once said, “A photograph is a secret about a secret. The more it tells you the less you know.” I set out to probe this secret—to explore her mystery—to illuminate if I could the sources of her vision. However, when I met with Doon Arbus, Diane’s oldest daughter and the executrix of the Arbus estate, she told me she could not contribute to any biography that touched on her mother’s life—“that the work speaks for itself.” Diane’s former husband Allan decided not to contribute, as did their younger daughter Amy and certain close friends including the late Marvin Israel.

I did find a great many people who were more than willing to help me piece together Diane’s worlds—the mercantile world of Russeks Fifth Avenue (her family’s department store), the glittering world of fashion, and the dark world of freaks and eccentrics she was so irrevocably drawn to.

From the very beginning Diane Arbus’ brother, the distinguished poet Howard Nemerov, gave me his complete cooperation and support. I visited him at his home in St. Louis and we corresponded regularly. I have also gathered copious reminiscences from the rest of Diane’s family: her mother Gertrude Nemerov, her sister, Renée Nemerov Sparkia, her brother-in-law Roy, her sister-in-law Peggy Nemerov. I interviewed cousins, aunts, uncles, and many of the people who worked at Russeks; I talked to Diane’s school friends from Fieldston, Phyllis Carton (now Contini) and Eda LeShan, as well as to teachers like Elbert Lenrow and Victor D’Amico who first recognized her special visual talent.

Some of the most significant conversations I had were with the women who were close to Diane Arbus, like her god daughter May Eliot and her photography teacher Lisette Model. I owe a special debt to Charlie Reynolds, a photographer who shared Diane’s love of circuses and magic, and to Neil Selkirk, who has printed all of Diane’s work since her death. With regard to her work, although the Arbus estate did not give me permission to reproduce any Diane Arbus photographs, I was able to document in my book the evolution of many of her images, often by speaking to those subjects still alive. My gratitude to them for their time and recollections. And thanks to those collectors who have kept some of Arbus’ earliest
un-published attempts with a camera and allowed me to study them. Special thanks to gallery owner Lee Witkin who directed me to much source material and who also lent me a rare Arbus portfolio to pore over.

I would like to thank John Szarkowski, the former head of the photography department of the Museum of Modern Art, curator Walter Hopps, and Studs Terkel, who gave me permission to quote from his tapes of Diane Arbus. And thanks as well to Philip Lopate who allowed me to draw from his extensive interviews with Lisette Model.

For the last two years I was given strong moral support by Aileen Ward and the Biographers Seminar at New York University’s Institute for the Humanities. The New York Society Library and the Mercantile Library have been unfailingly helpful, as has the photography department of the Museum of Modern Art; Anne Tucker, curator of photography of the Museum of Fine Arts, Houston, Texas; and T. Hartwell, curator of photography at the Minneapolis Institute of Art. Thanks to my researcher Judy Rehak and to Martha Kaplan. I would like to single out my husband, Mel Arrighi. He gave me the idea for this book; he helped me shape the material.

A final note of deep gratitude to my editor Robert Gottlieb for his guidance, his enthusiasm, and his supreme clarity.

A
S A TEEN-AGER
D
IANE
A
RBUS
used to stand on the window ledge of her parents’ apartment at the San Remo, eleven stories above Central Park West. She would stand there on the ledge for as long as she could, gazing out at the trees and skyscrapers in the distance, until her mother pulled her back inside. Years later Diane would say: “I wanted to see if I could do it.” And she would add, “I didn’t inherit my kingdom for a long time.”

Ultimately she discovered her kingdom with her camera. Her dream was to photograph everybody in the world. This meant developing tenacity, this meant taking risks, and Diane was always very, very brave; some people even called her reckless. But it seemed perfectly natural, since in her own imagination she believed she was descended from “a family of Jewish aristocrats”—given her definition that aristocrats possess a kind of existential courage. As far as she was concerned, aristocracy had nothing to do with money or social position. Aristocracy was linked to a nobility of mind, a purity of spirit, as well as inexhaustible courage. These were qualities Diane Arbus believed to be of utmost importance in life.

Actually, her maternal grandfather, Frank Russek, a short, mild-mannered man, had traveled to the United States from Boleslawiec, Poland, in 1880 and as a teen-ager kept from starving by selling peanuts on trains going from St. Louis to Kansas City. Then he and his brothers Simon and I.H. moved to New York, where they became successful bookies. The only reason they decided to trade furs, they used to tell Diane, was that it gave them something to do in the winter when the racetrack closed down. By 1897 Frank and I.H. had opened Russeks Furs in a tiny storefront at 14th Street and University Place in Manhattan. Minks from Michigan, chinchilla from the Andes, squirrel, beaver, and fox furs were all displayed in their tiny shop.