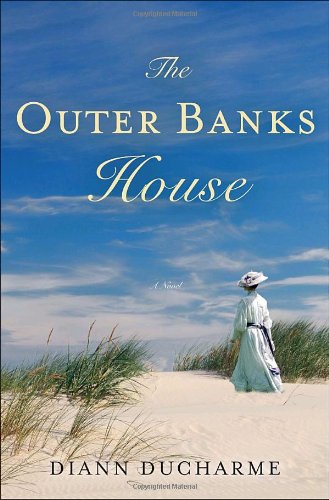 I walked about on the shore lifting up my hands, and my whole being, as I may say, wrapped up in the contemplation of my deliverance, making a thousand gestures and motions that I cannot describe, reflecting upon all my comrades that were drowned, and that there should not be one soul saved but myself …

I
WAS THE FIRST PASSENGER OFF THE STEAMBOAT
. M
Y FELLOW TRAVELERS
had insisted, for I had spent the duration of the journey in the throes of boatsickness. Everyone, including my own mama and daddy, had watched me from afar, afraid to get their Sunday best too close to me.

Behind me, I could hear them all lining up, eager to disembark, but
I stood directly in the way, unable to make my way down the skinny pier toward land. Folks started to politely fuss at me, but Charlie and Martha, my younger brother and sister, began pushing on my backside, forcing me forward.

Yet even as they jostled me along, I couldn’t take my eyes from the sight of the Outer Banks of North Carolina, stretching to the left and right at the end of the pier.

Gone were the ordered, busy streets of Edenton that we had left behind. In their place was a strip of land where nature wouldn’t allow such regulation.

Instead of brick buildings of commerce and law, there were giant dunes of beige sand that grew clear into the clouds. Instead of statues and lampposts, there were stunted and craggy trees that grew in the sand monsters’ shadows along the shoreline. Their gnarled branches blew obligingly in the brisk wind.

Even the soundside watering town of Nags Head was unassuming, and so flat that I could see almost clear across the narrow island to the Atlantic Ocean. The hotel and surrounding white houses were tucked into the sand and foliage so nicely it was as if they had been planted there.

But beyond all this was a shimmering in the eastern sky. I knew it was the ocean there, beneath the blue. I had never seen it in my life, and my heart began to beat faster in anticipation. I took a deep breath of the salty air, picked up my skirts, and started to run. I ran the way that I used to run when I was nine years old, when nothing mattered but the day on the plantation.

Our housemaid, Winnie, hollered after me, but her voice was lost in the wind. I didn’t even think about Mama and Daddy, or what they’d have to say to me later. I heard Charlie and Martha scampering after me, squealing at the game. But I didn’t turn around. I just
ran down the wooden pathway through the sand, my legs straining against my hoops.

Soon, from the unfamiliar exercise, I felt myself gobbling great gulps of hot air, and drops of sweat were seeping like pricks of blood into my beige traveling dress. My heavy strawberry hair baked under my bonnet, and my hands cramped with the weight of my skirts and the bunched-up parasol.

But I didn’t slow until I heard a rhythmic crashing and sizzling. The wooden planks came to an end in a wide plane of sand, which met naturally and directly with the object of my affection.

“Ocean,” I said breathlessly, as the wind whipped wayward strands of hair into my open mouth. Pelicans cruised like soldiers down the war zone of water, white-capped breakers marching and ebbing back, then crashing even harder. A few large ships inched along the choppy horizon.

Happy vacationers were everywhere. Gloved and bonneted women strolled with parasols, and the men splashed in the surf or even ventured out to swim in the rough water. Charlie and Martha whooped like orangutans and dashed past me to touch the shuddering water, feel with tentative hands whether it was warm or cold, but I couldn’t move.

I squatted and carefully plopped down on my left hip on the sand, still sucking in the air. I must have run almost a mile from sound to sea, the entire width of the island here. My uncle Jack would have whistled his approval. To see a sight like this, he would have run along beside me, forgetting that a young lady of my seventeen years should not be running anywhere.

I had brought along a piece of Uncle Jack, a letter that he had written to me right before he died of dysentery during the war. I hadn’t wanted to leave it at home, buried in the dresser where I kept a
book of scraps, stuffed with dozens of Uncle Jack’s letters, two tintypes, and even some of his auburn hair from a forgotten brush.

His last letter was by far the most precious to me. I tried not to handle it so much these days, because the paper was thinning out something terrible. But sometimes all I wanted to do was touch it, for I had memorized the cramped-up words long ago. And too, the letter still smelled vaguely of bark-oil tea and dirty linens, a smell that I now associated with death.

But on this day, I couldn’t help myself.

Keeping one eye on the children, I wiggled my reticule from my skirts and took out the letter. It whipped in the strong wind as I read.

You’ll have to excuse my penmanship here. I’ve been curled up on my right side for so long that my writing hand’s gone numb. This position suits me best, though, because it quiets the sizzling in my belly a bit. I tell you, sometimes I wish I had been shot clean through the skull. This quickstep is the devil’s business. You folks back home wouldn’t even know me, I’ve lost so much flesh. I bet I’m skinnier than you are. Don’t tell your daddy I said this, but I’m starting to think that he was the smart one of the both of us. I should have just stayed put. Edenton looks just like heaven in my mind, these days
.

I got this cheap paper from the blue-lipped nurse that creeps around here. I don’t like her much, mostly because of the sad look in her eyes. She’s young, just a little older than you are now. But she isn’t near as pretty as you, and like I said, she’s lacking in enthusiasm. ’Course, I’d never say that about you, niece!

Which reminds me, your daddy said in his previous letter that you’ve been reading a lot these days. He says that you’re going to drive him into bankruptcy with all of your book buying! I’ve been trying to picture my fiery Reb with her nose stuck in a book, just like her mama, I guess. It got me to thinking that I’d like to read one of those books myself. You’re likely having a good laugh right now. But there isn’t much decent to read in this hospital. I guess folks don’t think sickly soldiers are the reading kind of men, and I must admit, I feel a little rusty at the exercise. Why don’t you send me one of your favorites with your next letter?

It also might do you some good to get out of doors once in a while. Tell your daddy that I said to take Ace of Spades for a ride every now and then. Give the boy some sugar lumps for me, will you? I can just see you and me riding him, the way we used to. I can feel those ribbons of yours flying in my face. You never did holler, even when we were running through rivers. It’s those kinds of thoughts that get me through these awful days. I don’t see pretty Mary Virginia Spellman or even Annabelle Putnam in my head anymore. I picture a pair of steady green eyes and red eyelashes, and I grit my teeth and bear it. I try not to holler
.

I sure hope I can get better and come on home to you and the family. I miss you all more than Winnie’s butter biscuits. But if I don’t make it out of this hospital, I hope you remember me kindly. Not as this run-down, sickly soldier, but as your uncle, holding you tight on the best horse I ever had
.

I’ve got high hopes for you, so don’t let me down
.

As ever, your devoted uncle
,
Jack Sinclair

I swallowed hard and then yelled at Charlie to pull up the legs of his trousers. My siblings were already soaked to the skin, but I
couldn’t muster up much of a care. I pinched Uncle Jack’s letter so tightly between thumb and forefinger that I feared it would rip in the bullying wind, but I couldn’t put it away just yet.

The biggest regret of my life was that I never got to send Uncle Jack a book. He died before his last letter had even reached me.

It was awful to feature someone dying from dysentery, especially Uncle Jack, who probably came out of Grandma Marian’s womb with a grin on his face. I couldn’t ever remember him acting low-down.

Folks liked to comment on our similar dispositions and how they made us as close as any niece and uncle could be without it seeming sinful. His big hand on my head was a constant reminder of his need to father, and of my need to be parented. We knew this about each other, but never quite said so. It was just there, hovering between us as thick as the humidity on an Edenton noon in August, this paucity of attention from my own mama and daddy. We all lived in the same house, but Mama and Daddy made their true homes inside their minds, with the front doors closed to all but themselves.

In spite of this coldness, there was a spirit in me that seeked out the heat. I’d meander through the outbuildings to find my uncle, and the slaves would point him out to me with pity on their faces. Even they knew that I was starved for affection; even they knew that Uncle Jack would welcome his niece by pulling her onto his stallion with an easy tug on her reaching arm.