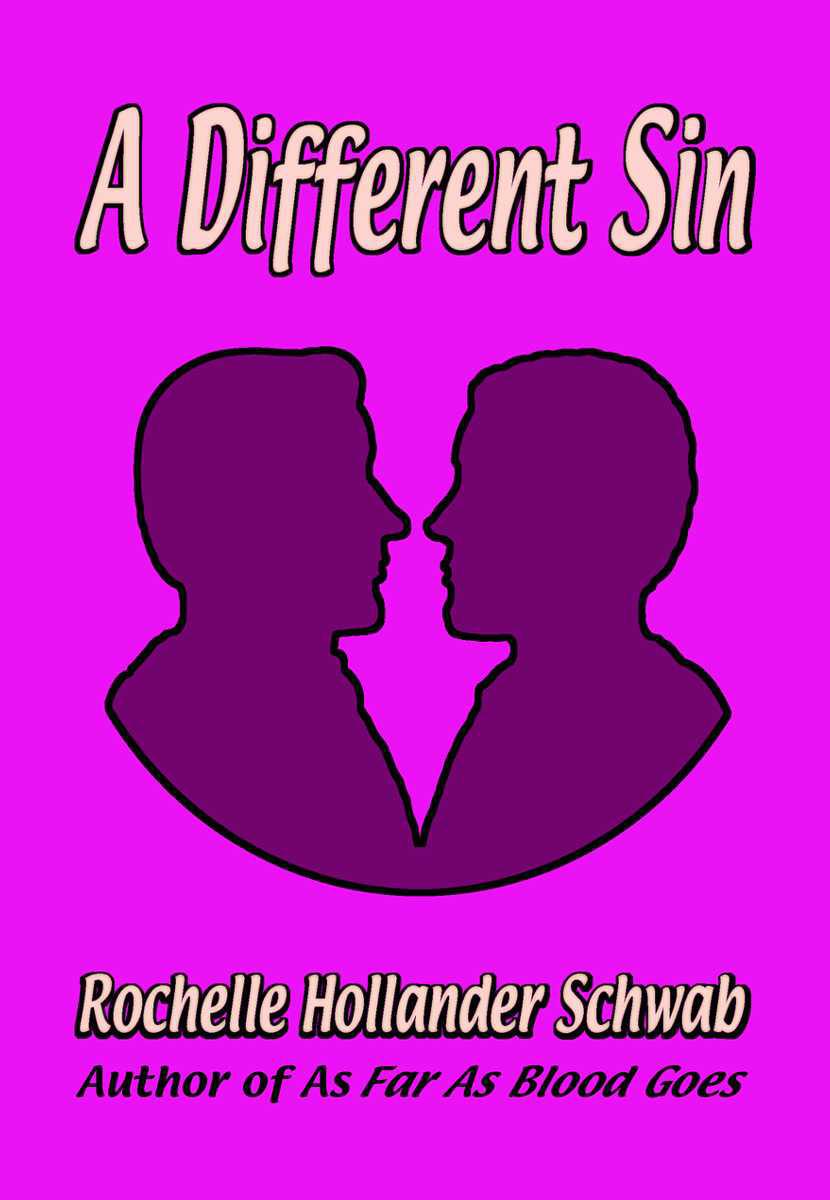 As the country hurtles toward Civil War, David Carter finds employment as an artist for a New York illustrated paper - and becomes the lover of a fellow newsman. Stricken with guilt for the "sin" of loving another man, David volunteers as a war correspondent covering Grant's 1864 drive toward Richmond. Faced with the horrors of bloody Civil War battles, David is forced into a final confrontation with his own nature.

...Schwab's depiction of war's horrors has the ring of truth...Civil War enthusiasts will find much that is diverting in A Different Sin. --
William Lyons, Alexandria Gazette-Packet, Sept. 23, 1993

Rife with plot twists and surprises....For someone looking for a good historical drama, A Different Sin is a must-read. --
Elizabeth Conley, The Independent Gay Writer, March 12, 2003

This beautifully written and well-researched novel has been called "the queer Gone With the Wind." Many of the characters were first introduced in Schwab's earlier novel, As Far as Blood Goes. However, this book stands entirely on its own.

All rights reserved. No part of this book may be reproduced or transmitted in any manner whatsoever without written permission except in the case of brief passages quoted in reviews. For further information, write:

Originally published in 1993 as a trade paperback by Los Hombres Press of San Diego, CA and printed in the United States of America.

This novel is a work of fiction. Names, characters, places and incidents are either the product of the author's imagination or are used fictitiously. Any resemblance to actual events or locales or persons, living or dead, is entirely coincidental.

A Departure from the Script

In a Family Way

As Far as Blood Goes

PRAISE FOR A DIFFERENT SIN

“I’m sure I’m not the first (or the last) to hail this book as the queer
Gone With the Wind
!.... beautifully written and carefully researched... the love scenes are wonderfully sensual and moving...”

— John Starr,
OUT in Virginia

“Schwab's depiction of war's horrors has the ring of truth... Civil War enthusiasts will find much that is diverting in 'A Different Sin.'”

“... a dramatic story, well told, presenting homosexuality in an intensely human way. Rochelle Schwab calls out of her readers a higher consciousness and a deeper humanity while forcing prejudice and ignorance into retreat.”

— The Right Reverend John S. Spong, D.D., Bishop of the Episcopal Diocese of Newark, author of
Rescuing the Bible from Fundamentalism

“
A Different Sin
brings us a story of romance, love, and perseverance set in the most unexpected of places—pre-Civil War America.... At a time when love between two men is all but unheard of, David and Zach take their friendship a step further.... Rife with plot twists and surprises,
A Different Sin
is rich with descriptions of wartime events, often jarring the reader from a place of comfort to the battlefield.... In addition to presenting a good tale, the story offers insight into one of the most turbulent and formative periods in our nation's history. For someone looking for a good historical drama,
A Different Sin
is a
must-read
.”

Praise For A Different Sin

THE THUD OF THE GAVEL RELEASED THE COURTROOM SPECTATORS from silence. Voices rose in a babble of argument, approbation and anguish: assured, broad-voweled Brahmin accents, loud Irish brogues, the softly slurred tones of blacks who’d found Boston a tenuous refuge and gazed at the manacled defendant with helpless fellow feeling. Not, David thought, that the proceedings could be termed a trial. The Fugitive Slave Law empowered United States commissioners to rule a man a fugitive solely on his alleged owner’s affidavit, with no testimony on his own behalf.

From his seat in the third row of newsmen, David Carter stared over the heads in front of him at the parade of witnesses called by the accused fugitive’s attorneys to testify that the apprehension of Anthony Burns was a case of mistaken identity: the one possible defense. Burns’ volunteer attorney, the renowned Richard Henry Dana, proceeded with an assurance matched by that of Robert Morris, his young colored assistant. David’s thoughts strayed from the hearing as he studied the dapper, colored lawyer, admiring his poise in front of the crowded courtroom.

He’s a hell of a lot more comfortable up there than I’d be, David admitted to himself. Wonder how the hell he got to be a lawyer? Couldn’t have been easy for a Nigra, even up here in Boston. Though Mike managed to become a doctor. Done a damn sight more with his life than I have despite Dad’s insistence on putting me through university.

David wrenched his attention back to the efforts of the two attorneys to prove Burns’ arrest an error. It seemed damned unlikely they’d succeed. He studied the accused fugitive. Burns’ face was an ebony mask, his apprehension betrayed by the drops of sweat beading his forehead, his quick sidelong glances at Colonel Charles Suttle, who’d journeyed from Virginia to claim him as his property. The manacles clanked as he shifted position. Why in hell couldn’t Suttle accept a fair price for Burns from the abolitionists, instead of dragging him back to slavery? David wondered. Though he supposed the irate slaveowner wanted to make an example of him. David felt a quick rush of sympathy for the runaway.

There wasn’t a damn thing
he
could do though. Anymore than he’d been able to help when Mike, his own half brother, had been carried back to slavery under the provisions of the Fugitive Slave Law three years earlier. David glanced at his scribbled notes, hoping he could make enough sense of them to wire a coherent report. It was as an illustrator he hoped to establish himself, not a reporter. But his costly wire to the editor of his hometown paper had brought him only a request to forward an account of the trial. At least the
Gazette’s
return telegram had gained him admittance to the courtroom. He could do a quick sketch or two during the recess. He turned his pad to a clean page and set to work.

He drew the courtroom scene, then did a rough outline of Burns’ figure before stopping to massage his cramped fingers. He stood and moved toward the aisle to stretch, muttering apologies as he climbed over the feet of scribbling newsmen.

“It’s a long sit in such cramped quarters, isn’t it, but not half as long I daresay as for that poor devil chained up there.” David turned at the words of the man standing in the aisle beside him. The other man waved his hand in the direction of the manacled fugitive, then offered it to David in a handshake. “I’m Zachary Walker, with the
New York Tribune.
Which paper do you write for?”

Walker withdrew his hand, an expression of apparent distaste crossing his good-humored face. “Virginia, eh. I suppose you’ll be glad to see this poor fellow dragged back into slavery then.”

“Hardly, sir,” David said. These damn abolitionists were all alike-tarred all Southerners with the same brush. “I have a half brother who’s colored, who was taken as a fugitive three years ago. I’ve some idea what Burns is going through.”

Walker’s eyebrows rose, two bushy white question marks under a high, ruddy forehead. Dammit, David wondered, what had made him blurt out his family’s private affairs? The bailiffs cry ended the recess. David returned to his seat with relief, thankful to be spared further embarrassment.

Michael peered down the tracks at the approaching train, turned to David. “I wish you’d stay longer. You’ve hardly been here two weeks.”

“Dad’ll be with you, though. And I’d like to show these to the editor of the
National Era.”
David tapped the portfolio of sketches he’d done: of Burns’ hearing and of the contingent of troops that had marched the fugitive to the Virginia-bound revenue cutter the day before. “I’m hoping he’ll want to run some of them.”

“They’re good drawings,” Michael assured him. “But it hasn’t been much of a visit, has it? I haven’t been able to think of anything but trying to rescue Burns—” He raised his voice over the noise of the locomotive. “Don’t wait another three years to come back, hear?”

David nodded. He could hardly tell his half brother that his infrequent visits to Boston, undertaken only at his father’s urging, made him feel even more inadequate than usual. His own poor showing as a lawyer, too unsuccessful in his halfhearted practice to move from under his father’s roof, was galling enough, without seeing Michael’s success at overcoming the handicap of color to become a physician. “I won’t, Mike,” David said, holding out his hand.

He sank into a window seat on the train and slipped a sketch he’d done of Burns from his portfolio. Crossing his legs at the knee, he propped up the drawing, studying it thoughtfully, his pencil held loosely in his fingers.

“Poor devil was scared to death, wasn’t he? I see you’ve caught the way he couldn’t take his eyes off his master’s face. You do good work.”

Startled, David turned toward the man who’djust dropped into the adjacent seat, then winced inwardly as he recognized the
Tribune
reporter who’d accosted him at the hearing. “Thank you, sir,” he said.

“Zachary Walker. We spoke at the so-called trial. I never did get your name.”

Walker held out his hand once again, enveloped David’s fingers in his firm grip. “You piqued my interest with your remark about your colored half brother. I’d like to hear more of the story.”

David silently berated himself for shooting off his mouth at the hearing. He studied the reporter a minute. Walker appeared some five years past his own age of forty, though the whiskers wreathing his full face were nearly white, as was his crown of wavy hair. His gaze pinned David with eager interest. “There’s not that much to tell,” David demurred.

Walker’s eyebrows rose as they had at the hearing. “I shouldn’t think it’s an everyday occurrence.”

“It’s not that uncommon.” David flushed, feeling the heat spread downwards. He tugged awkwardly at his stiff collar, loosening his cravat. “My father owned Hetty, that’s Mike’s mother, and he, well, he bedded her. I understand my mother was an invalid at the time. Mike’s a year younger than me.”

Man Who Should be King by Mlyn Hurn
Virtually Real by D. S. Whitfield
In Hiding: A Survivors Journal of the Great Outbreak by Elliott, ,ichael
A Nest of Vipers by Catherine Johnson
Games of the Heart (Crimson Romance) by Shaw, Eva
I Never Thought I'd See You Again: A Novelists Inc. Anthology by Unknown
Luca (I Love the Way You Lie #1) by Gina Whitney
The Dandarnelles Disaster by Dan Van der Vat
Unknown by Unknown
The Taming of Lilah May by Vanessa Curtis