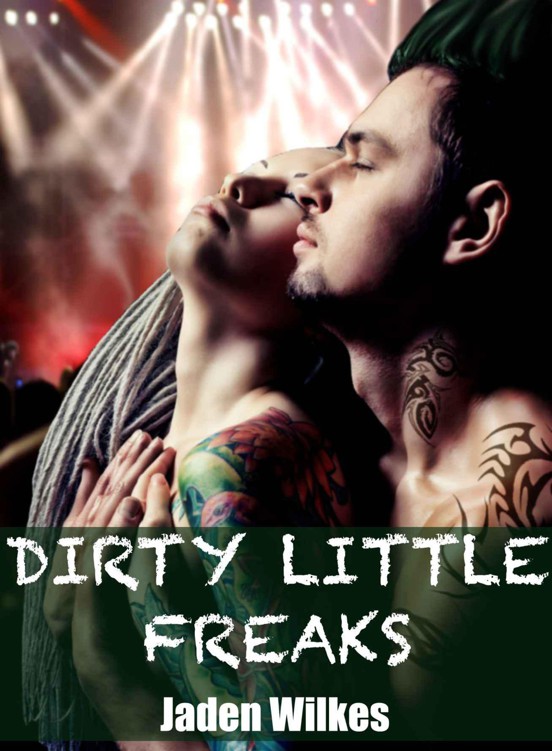 Copyright © 2014 by Jaden Wilkes. All rights reserved. This book or any portion thereof may not be reproduced or used in any manner whatsoever without the express written permission of the publisher except for the use of brief quotations in a book review.

Basically, don’t be a dick. I work hard as an independent writer, and it sucks every time I come across some douchey pirate site with my books on it. If you seriously can’t afford the very low price to buy my book, then email me and we’ll talk about it. Most likely I’ll send you a copy if it means you aren’t downloading it for free online somewhere.

And if you do download this for free from some rip off site, just remember, karma is like 69, you get what you give. It’s coming for you, asshole. Enjoy your shitty luck.

Please understand that this book is full of swearing and sex and drugs. I don’t control what my characters do or think, so don’t shoot me off a bunch of angry emails because you got fired for reading it at work, or God is going to smite you for laughing, or you caught your husband jerking it to the sex scenes.

This is also a work of fiction. Seriously, dude. If you feel compelled to have casual, unprotected sex or shove coke up your ass because you read about it somewhere, frealz, you need help. Unprotected sex often leads to gross diseases and even worse, babies. And yeah, drugs are bad…mmkay? So, I guess that about covers it.

If you got this far, enjoy!

To all the bad boys

who inspired my work.

the baddest of them all.

Chapter One
The Efficiency of Glory Holes

I wake to the bright sunlight stabbing my eyelids and the slapping sounds of sex in my ears. I mentally check myself and breathe a sigh of relief. It’s not me fucking some dude, thank God, it’s always so awkward dozing off during a one night stand. Eva is at it again, I can’t remember who she lured home from the party this morning. I can’t even remember where the fuck the party was, but I feel like I had a good time. My head hurts and my limbs ache, I vaguely remember crowd surfing at some point, and a mosh pit. Damn, I might be bruised.

Fuck, what time is it? We dragged our asses in some time around five this morning and I have to be at work by six tonight. I roll over, reach for the phone, and realize my door is wide open; they are going at it on the couch, in full view.

I unplug my phone from the charger and will my eyes to focus. It is only three in the afternoon. Thank God, I hate having to rush to get anything done, making my way to the world’s shittiest job would have made hurrying even worse. I think only ‘Wal Mart greeter’ would rank lower than what I do, which is officially “retail clerk”, but more accurately “night shift babysitter in a sex shop/jerk off establishment” in Vancouver’s entertainment district.

That’s right, I am the unenthusiastic girl people avoid making eye contact with when they buy their spank mags and twelve-inch rubber cocks. I’m the one in full HAZMAT gear cleaning up the “accidental” shot spots they leave behind in one of our twenty-five cent porn booths. For what it’s worth, there’s a reason I don’t fill in the glory holes, they all think they’re so sneaky, getting their dick sucked by some anonymous stranger on the other side. I see it as less clean up, let the cock sucking stranger slurp up their spunk. It saves me running a disinfectant wipe along the wall, hoping that none of it touches any part of me. So keep up the good work anonymous strangers, keep gobbling cock and making my life easier. If you want, leave your address at the store and I’ll add you to my fucking Christmas card list.

I drag myself out of bed with some effort and wander through the living room. Dude’s rhythm has slowed a little and he looks surprised when he sees me. Deer caught in headlights with his cock out.

“It’s cool, it’s cool, carry on,” I say with a dismissive wave of my hand.

“You want to join-” he starts to ask, but cuts himself off when he sees my contemptuous stare.

“Not in a million years, but seriously, keep going or she’ll get pissed,” I let him know.

“Fuck yeah, come on, I’m almost there, asshole,” Eva complains, she reaches around and slaps his thigh.

“I told you,” I smirk and leave the room in search of coffee.

“You chicks are fucking nuts,” I hear him say as he starts to hump again. Dude, you don’t even know the half of it. Now where the fuck is that coffee?

Thirty minutes or so later I hear him leaving, Eva offers up the expected platitudes, “Oh yes it was awesome, I’ll totes call you, see you again soon, you were amazing.” She’ll never see him again, or should I say he’ll never see her? She is the avoidance queen. She has a three time rule, or curse, however you look at it. She says it’s amazing the first time she fucks a guy. The second time, not so much. By the third time, she’s totally bored and over him ages ago. Her theory is stick to the amazing and never let it get boring. Some might call her a slut; I call her a sexual friggin genius.

My problem? I don’t have sex nearly as often as I should, which probably contributes to my bad attitude. Not like, never, I’m not a virgin, but sex kinda disturbs me on some level. It might be my disgusting job, it might be the uncle who groped me every chance he got when I was a kid, or it might be the fact that I don’t find a lot of guys attractive and girls aren’t my thing, I don’t fucking know. I do know I need to fuck more often than I do, but people mostly suck, and not in the good way. When I do get the hornies though, watch out Vancouver, I’m like a cat in heat. I swear, it comes over me, a full on hot wave of stupid and I need a deep dish dicking like nobody’s business. When the stars align, and the drugs are good, I will get out and fuck like a rabid porn star. I have checked a lot of boxes on those online “purity” tests, but there’s still a few things I’d like to try. Sadly, a lot of the time I end up rubbing one off and cruising online dating sites for stimulation. When easy, meaningless sex and those God damned twelve-inch rubber cocks surround you, your porn becomes the promise of eternal love and a long term relationship. I always delete my browser history though, I think Eva could handle me jerking it to “I want to fuck my roommate with a huge strap-on dot com” more than me lusting over prep school graduates on Plenty of Fish, you know, the dudes with full time white collar jobs and sensible cars.

“Woo-fucking-hoo, that was fun,” Eva says as she comes into the kitchen. “His cock was massive, and he almost knew how to use it.” She has a shit-eating grin on her face; she loves sex, nothing gets her as high as a one-night stand. I love her when she’s on this high, so I approve of her random fucking. Is that weird? Fuck, who cares, she’s happy, I’m happy.

“Are you going to see him again?” I ask, deadpan. Half a second passes and we both crack up laughing. Of course she won’t, she never does.

“Poor guy doesn’t know what hit him,” she says, spreading some cream cheese on a bagel. “Why do guys get so fucking clingy when you don’t want to settle down and have their babies the minute they stick a dick in you? It’s weird, everyone else complains they can’t get a guy to hang around, I can’t get rid of them.” She starts fussing around the kitchen, wiping the counters and brushing crumbs into the sink. Another reason I love this girl, she’s a clean freak.

I can see why men wouldn’t leave her alone though; she is gorgeous, like really hot. I almost wish I were into girls; she’d be the one I’d go for. Maybe. She’s already kinda clingy with me, I can’t imagine how bad it would be if I was sucking her clit to boot. She would be a good catch though, she’s model tall, almost six feet, with long blonde hair and sweet surfer girl looks. At twenty-one, she still looks like a teen, she has an innocent shine in her bright green eyes, and men fall for her like idiots. I get a kick out of seeing them pant around her, begging for her attention, pleading with her to buy a drink or have a moment of her time. It is ridiculous, but keeps me constantly entertained and full of free drinks so I am not complaining any time soon.

I am not that lucky, I am shorter by a few inches, not lithe but not dumpy either. If genetics have anything to say about my future, I will end up with what my mother calls the family ‘wood stove’ body. Short, squat, and round with tiny little legs, like those old wood stoves you see in vacation cabins. Not that I’ve ever been to a vacation cabin, but I’ve seen them on TV and such. So yay genetics, but my mom could be lying for all I know, I don’t have anything to do with the family. I guess I’m ok looking if I’m being honest. I keep my dark hair pretty short and it’s currently bright blue. I change the colour often and have a wide assortment of wigs and extensions, just to keep my life interesting. It also makes me laugh my ass off when I am tripping balls and forget what I’m wearing; one look in the bathroom mirror will have me in hysterics. I play practical jokes on myself. Good hell, I need a different hobby.

My eyes are green, but not Eva’s sparkling, bright green, mine are more of a dark angry green. The green you associate with pond water or dank forest cover, not the precious jewel tones that Eva has lucked out with. I suppose some have called me beautiful, but I have a hard time believing it. I have a pixie face and was blessed with huge tits. They’re my one asset, when Eva’s not around I whip these puppies out to bring on the free booze. It mostly works if I can keep my sarcastic personality in check and my mouth shut.

I am tattooed, full arm sleeves depicting my favourite characters from classic fiction. Alice in Wonderland and the Cheshire cat wrap around my right arm, filled in with vines and flowers. My left arm has a couple of the monsters from Where the Wild Things Are with the Grendel from Beowulf. Sometimes people ask me why I chose the villain and not the hero…if you have to ask, you don’t know me that fucking well. I’d rather root for the underdog than some douche bag phony trying to front just to win some bitch’s hand in marriage. Yeah, I sound cynical, but that’s only because…well, I am. I also have some twisting designs across my chest that I drew based on some Celtic images I tore out of a History text book in grade ten. I’m not sure of my ancestry, so I just kinda make shit up as I go along.