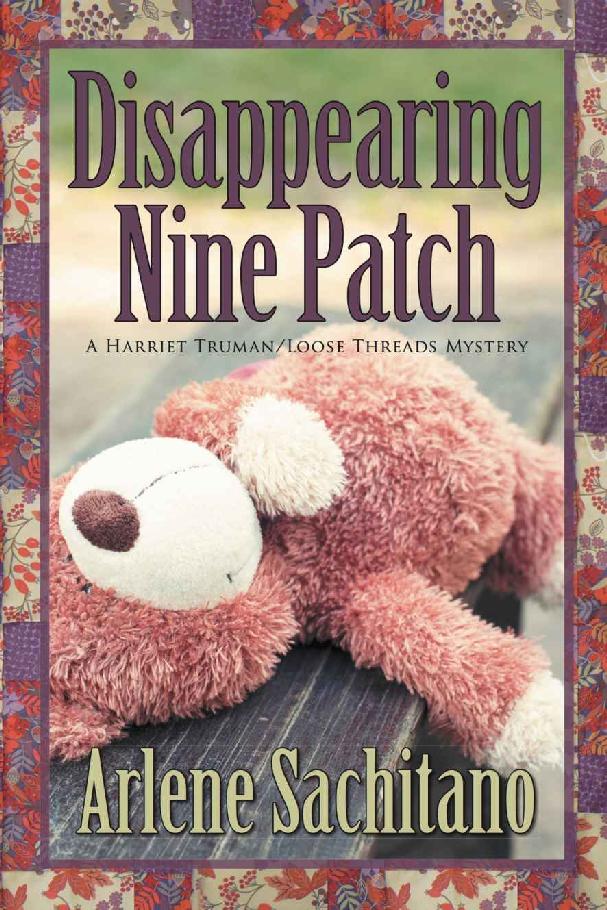 For Vern and Betty

Harriet heard the customer entrance of her long-arm quilting studio open as she came downstairs into her kitchen. She paused. She wasn’t expecting anyone, but her quilting group, The Loose Threads, met in her studio often enough that most of them had keys.

As if to prove her right, her aunt, Beth Carlson came into the kitchen through the connecting door, followed by Beth’s best friend Mavis Willis.

“Honey…” Beth said then paused while she set a glass baking dish on the kitchen counter.

Harriet crossed behind her, opened the coat closet and began rummaging around, her back to her unexpected guests.

Mavis set her worn black leather purse on a kitchen chair and slid out of her jacket.

“I know you’ve been a little down these last couple of weeks since Aiden left,” she said. “But you can’t mope around the whole time he’s gone. He’s probably not coming home for another two months, and he may decide to stay and visit when his friend gets back to Africa, so it could be the end of summer before he comes back. You can’t stay holed up in your studio all that time.”

“You haven’t come to any Threads meetings down at the quilt shop, and you’ve refused everyone’s invitations to dinner or anything else, so we decided to have a potluck here. The rest of the group will be here in half an hour.”

Harriet grabbed her jacket and purse.

“Can you take Scooter out in a little while? I’ve got to go. I don’t know how soon I’ll be back. I’ll call when I know more.”

She exited into the garage, leaving her aunt and Mavis standing in her kitchen.

She drove to Smuggler’s Cove in record time, turned her car into the driveway of her friend James’s restaurant, and braked to a stop. James met her at the back door, dressed in his white chef’s coat and hat.

“Thank you for coming so fast—I didn’t know who else to call. Cyrano was in his kennel when I checked him fifteen minutes ago. I’m sure I closed the latch—I always double-check. I went back in the kitchen and set some water on to boil, and when I went out to get him and put him back in the office, he was gone. I’ve got twenty-five women coming for a special lunch in the private dining room, so I can’t leave to go search for him.”

“Do you think one of the other racing wiener dog owners could have taken him?”

“I doubt it. None of our local group is that competitive. We’re all in it for the fun.”

“Let me go walk the neighborhood, talk to a few neighbors and find out if anyone’s seen him.”

She hoped she wasn’t lying.

She set out across the parking lot, pausing where the gravel thinned around a mud puddle. She bent to look and pulled out her phone to take a picture of the faint paw prints on one side of the puddle. Closer examination revealed a child-sized tennis shoe impression.

Harriet clicked a few more pictures before continuing to the sidewalk then to the nearest house. The neighborhood was made up of homes built in the Folk Victorian style. They tended to have simpler floor plans and were less ornate than the classic Victorians in her own neighborhood—the affordable homes of their era.

She stepped onto the porch and pressed the doorbell. Moments later, a short woman with white hair opened the door.

“Hi, I’m looking for a missing wiener dog. He disappeared from his kennel in back of the restaurant… “She pointed back toward James’s place. “…about thirty minutes ago.”

“Oh, you mean little Cyrano? I can’t believe he’d run off. He adores James. And he knows which side his bread is buttered on.”

“Have you seen any unusual activity in the neighborhood this morning?”

The woman thought a moment. She pressed her lips together and looked up at a spot on the doorjamb.

“I don’t know as it’s unusual, but the school bus didn’t come today, and I saw a couple of kids playing down the street. Must be some sort of in-service day or something.”

“Thank you, that helps a lot.” Harriet turned to go.

“Will you let me know if you find him?” the woman asked.

Harriet gave her a half-smile. “Sure.”

She walked down the sidewalk, scanning the driveways as she went. Three doors down and on the other side of the street, a child-sized bike lay in the grass. She crossed the street and was heading in that direction when she heard a familiar bark. She picked up her pace, taking the steps two at a time to reach the porch.

The barking increased as she rang the doorbell and then, when no one answered, pounded on the door. Finally, the barking became muffled, and a childish voice called out, “Nobody’s home, so you can go away.”

“You aren’t in trouble,” she called back. “Just give me the dog.”

“We’re not allowed to open the door to strangers,” the child replied.

“You’re also not allowed to steal dogs. Either send the dog out, or I’m calling the police…” She paused for dramatic effect. “…and your mother.”

“What’s going on here?” a dark-haired young woman in running clothes asked as she crossed the yard and stepped onto the porch.

“I’m looking for a lost dog, and I can hear him barking inside your house.”

The woman slid a key into the door lock and opened the door.

“We don’t have your dog. I’m allergic to dogs—the kids know that. Liam, Sophie?”

There was a muffled noise, and then James’s dachshund Cyrano burst into the entry hall. He ran over to Harriet, jumping up and down and barking. Liam and Sophie stood side-by-side, unable to make eye contact with their mother.

“You two are in trouble, big time. Not only did you take this woman’s dog, but you left the house. I told you to stay in the playroom while I ran around the block. You promised me you would.”

Sophie, looking like an orphan in her faded pink unicorn pajamas and purple rubber boots, still refused to look at her mother.

“I wanted to watch a show, and Liam wouldn’t give me the channel changer. I went out to find you.”

“I thought you’d be mad if I let her go out by herself. She’s only seven.” Liam was similarly attired in too-short jeans over blue-and-red rocket ship pajamas.

“So you went along to…what? Protect her? How noble of you. Maybe if you’d been that selfless about the show, you wouldn’t be in this predicament,” their mom told them in a stern voice. “And what are you two doing running around the neighborhood in your pajamas?”

She turned to Harriet.

“These two hoodlums are going to be grounded for weeks. When they’re finished with house arrest, would you be agreeable to having them do some sort of restitution?”

Harriet had to try hard to maintain her stern look.

“Cyrano belongs to the man who owns the restaurant down the street.”

“You two went all the way to the restaurant?” Mom all but shouted, fear leaking into her voice.

“I’d better get this little guy home,” Harriet said. “James is very worried about him. He’s got a restaurant full of people, or he’d be here himself. You can stop by the restaurant and talk to him about whatever penance you think is appropriate.”

“You two go up to your rooms.” She turned back to Harriet when the little dog-nappers were out of sight. “I’m Melanie, by the way. I’m so sorry my kids took your friend’s dog. Can I do anything for him? Does he need to go see the vet or anything?”

“He seems fine to me, but James can let you know if any follow-up is needed.”

Melanie put her hand over her heart.

“I can’t believe they left the house. It’s an in-service day at school. They were engrossed in a game and still in their jammies. I thought I could get a quick run in and be back before they finished. Clearly, that was a mistake. Oh, my gosh, you aren’t going to turn me in to Children’s Services, are you?”

“I don’t think that will be necessary. I assume you aren’t going to go out and leave them alone again.”

“I’ll just take this little guy and get him home.”

“Tell your friend how sorry I am.”

“I will,” Harriet said and went out the door.

She carried Cyrano in through the back door of the restaurant. She peeked through the kitchen door and saw James, up to his elbows in julienned carrots.

“You, little man, are going into your kennel in your daddy’s office for now.”

She put him in the wire crate and made sure there was water in the dish before returning to the kitchen.

“I put Cyrano in his kennel in your office. Your neighbor up the street, Melanie, is hoping you’ll let her two junior criminals do restitution of some sort after she grounds them for a while.”

James looked over his shoulder at her.

“I can’t thank you enough for finding my little rat. I’ll make it up to you, I promise.”

“That’s not necessary. I’m happy to help.” She looked at the arrangement of vegetables he was doing on chilled salad plates. “That looks good.”