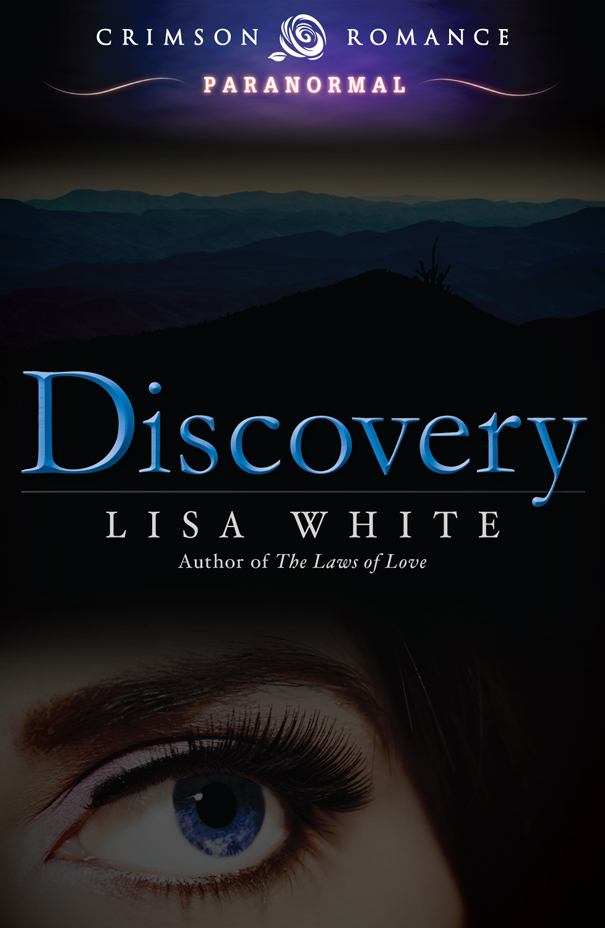 Discovery
Book One of the Council of Powers Trilogy
Lisa White, author of
The Laws of Love

For Collin and Christopher,

whose powers are immeasurable.

Prologue: And Then There Was One â¦

Chapter One: The Meeting

Chapter Sixteen: The Trio of Boulders

More From This Author

Thank you to Meredith O'Hayre, Jessica Verdi, and all the other Ladies in Red at Crimson Romance. You are a kind, talented, and supportive group and I am grateful to be on this journey with you.

Thank you to Sarah Blevins, Morghan Clark, and Sarah Luther who took the time to read Discovery and reminded me how to be young again.

Thank you to Lori Byington, my “sista” cousin and mistress of the English language. Your continued insight, guidance, support, and love are gifts from above. Udooo!

Thank you to my family whose power of love is consistent and unconditional.

And most importantly, thank you to my husband and our two wonderful children whose powers bring me joy. You are true blessings from God and I thank you all for loving me.

Prologue:
And Then There Was One â¦

The highway patrolman wrote “Unknown” on the blank line across from the word “Cause.” He hated using that word, especially when death was involved, but the seasoned officer did not know what else to write in his report.

The weather was clear. The road was dry. No other cars were involved. But here he was, staring at a crushed wad of metal in the middle of the road while the sun glimmered brightly off the van's chrome accents. The chrome accents that had adorned the van only a few hours earlier. The shiny chrome ribbons contrasted sharply against the black tar of the hot pavement underneath and it seemed strange to the patrolman that, despite the acrid smell of burnt metal lofting around the van, there was no evidence of fire. None of the chrome pieces were burned or even scratched. They were dented and twisted, sure, but no burn marks could be seen anywhere.

Looking closer at what used to be the family's minivan, the patrolman noticed that the same was true for the van's paint. It was a metallic light blue that matched the color of today's clear sky, but the van's blue parts, while wadded up together like one large piece of notebook paper, were as clean as the day the car rolled off the assembly line. There were no scratches crossing through the blue, no burned spots dirtying up the paint's glitter. Instead, it looked as if the parts were originally molded in their present contorted form and then sprayed with the shiny blue paint like some modern-day sculpture on display in the latest hip art gallery.

The patrolman stopped writing his report, placed his pen in its usual spot on his clipboard, and peered down through the shattered window into what was left of the van's interior. In all his years on the job, he had never seen anything like this. Except for the dark red blood stains running through the beige leather and the copious used gauze pads left behind by the paramedics, the van's crushed interior was pristine, as clean as the new models sitting on the showroom floor at an auto mall. It was as if someone had picked up the minivan, dunked it in bath water and, while still holding it under the water, crushed the van and its occupants, ending the massacre by delicately placing the washed metal mess back in the middle of the road from whence it came.

The patrolman took a deep breath, kicked at a stray gauze pad, and began writing his report again. Four of the van's five occupants died that day and the patrolman reasoned that the van's unusual pristine interior somehow helped protect the surviving, slender, fourâyearâold girl from the other occupants' fate. He had dealt with dozens of crashes during his years on the force, but those involving children never failed to affect him, especially those that produced orphans. The young girl's wide eyes frantically darting around the scene as the paramedics loaded her into the ambulance left another scar on the patrolman's memory and he knew her blue eyes would haunt his dreams for quite a few nights going forward. He was so captivated by the girl's eyes he never saw the man standing on the high ridge overlooking the crash site.

The man who smelled of burnt metal.

The man who did not understand why the girl was still alive.

Chapter One: The Meeting

Her hands were tingling.

From her wrists to her fingertips, each hand shook and pulsed with tiny electric shocks. The minute Grace felt the tremors return, she shoved her vibrating hands into her pants pockets. How in the world was she supposed to work today? She could not even carry one plate, let alone a whole tray of them. But while the shaking made it difficult to use her hands, the sensation itself wasn't really painful. Most of the time, her hands felt more like they had fallen asleep. Unfortunately, Grace had not figured out how to make the shaking sensation go away so she just stood to the side of the stainless steel serving counter with her hands in her pockets, hoping this episode would be a short one.

There. Almost gone. Only her fingertips shook now.

“Order up!” the cook's assistant said.

Grace slowly pulled her hands out of her pockets and gave them one last squeeze.

Grace glanced down at her hands. They were no longer shaking, not even her fingertips. Surely she could carry one simple glass. She smiled at her friend and reached across the serving counter for the shrimp cocktail. “Annie, this isn't a diner. You know you're not supposed to yell âOrder up' like that. What if Julian heard you?” Grace stood at the serving counter until she was certain she could hang on to the glass full of shrimp.

“Oh, calm down. He can't hear me.” Annie peered over at the banquet manager on the other side of the kitchen. “Besides, I just do that to bug him. You know how snobby he is over this place.”

Grace sighed and shook her head as she gripped the shrimp cocktail with both hands and headed into the formal dining room. It was a packed house at the Southern Pines Country Club that spring afternoon, so even the waitresses were pulling double duty in the kitchen. Luckily for Grace, however, Lady Covington had dropped by for lunch. The elderly woman preferred to have Grace wait on her, so Julian, the banquet manager, had chosen his nemesis Annie to abandon her waitress duties and play first mate to the club's cook.

As Grace expertly weaved in and out of the crowded dining room tables toward Lady Covington, another club member seated nearby waved to the young waitress. “Gretchen, over here.”

“Yes, Mr. Williamson.” Grace smiled without bothering to correct him on her name. Even though she had waited on Mr. Williamson a hundred times, he had yet to get it right. He was one of the club's regular golfers and his penchant for hideously bright plaid golf knickers made him a well-known figure at the club. In return, he knew just about everyone working there, even down to the deliveryman who restocked his Dewar's Scotch each week. But for some reason Mr. Williamson had a mental block on Grace's name. The other day she was Gwen, today it's Gretchen, but he never could remember to call her Grace. His consistent memory loss didn't really upset her, however, because being anonymous made it easier to blend in.

“Can you ask Ben to bring me another Scotch? He knows how I like it.” Mr. Williamson half-smiled, swirling his ice cubes as he tipped up the almost empty glass to Grace.

“Of course, sir,” Grace nodded before continuing on her way. She finally made it over to Lady Covington seated at a corner table and, using both hands, carefully placed the shrimp cocktail in front of her discerning diner. “Here you are, Lady Covington. Your salad should be out in a minute. Can I get you anything else?”

“No, dear. I'm fine. Just trying to get back to my mahjong game in the ladies lounge so this will be a quick lunch today.” Lady Covington smiled up at Grace. The matriarch of the country club was a large woman who, despite her size, carried an air of sophistication around her in the same way other women wore perfume. Grace did not know why she was called “Lady.” In fact, her Chanel suits and Jackie Kennedy triple-strand pearl necklace made her look more like a 1960s New York socialite rather than some titled English matron. The rumor around the club was that Lady Covington had actually run in the same circles as Mrs. Kennedy when she lived in New York City, but no one had ever figured out why she was a “Lady” or how the elderly New Yorker ended up all the way down here in Southern Pines, South Carolina. Normally grouchy with other wait staff, Lady Covington was more tolerant of Grace for some reason and, so, by default, Grace had become her private servant at Southern Pines. Despite the incessant teasing from her coworkers for being Lady Covington's favorite, it was not a bad deal for Grace considering the tips the elderly patron left her. That and she was one of the few club members who actually remembered Grace's name.

“Well, I'll be back to check on you in a bit,” said Grace as she turned to head back to the kitchen. Her hands were back to normal now so she took the long way around the dining room, discretely checking on her other tables and even on some that did not belong to her. She eventually made her way back to the kitchen's swinging doors but almost plowed down another waiter in the process.

“Hey! Gracie, watch it!” The waiter, Ben, reached down and caught a falling wine glass just before it hit the marble floor. He moved so fast, Grace almost did not see the glass until it was already placed back on Ben's tray. “What's the rush?”

“Sorry. I'm just trying to get it all done.” Grace stood to the side and held the door open for Ben with her foot as she reached behind her head and adjusted the hairclip holding her long, brown hair back from her face. Julian liked all his waitresses to be perfectly coiffed but Grace's wispy tendrils would never stay in the required ponytail. She spent most of her time between orders unsuccessfully fussing with her hair.

Wanderlust: A History of Walking by Rebecca Solnit
Marauder Kain: Scifi Alien Invasion Romance (Mating Wars Book 5) by Aya Morningstar
Where Darkness Dwells by Glen Krisch
The Dream Thief by Shana Abé
Darker Than Night by John Lutz
Hidden in Dreams by Bunn, Davis
False Covenant (A Widdershins Adventure) by Marmell, Ari
Girl in the Dark by Marion Pauw
The Bungalow by Jio, Sarah
Ancient of Days by Michael Bishop