Read Dive in the Sun Online 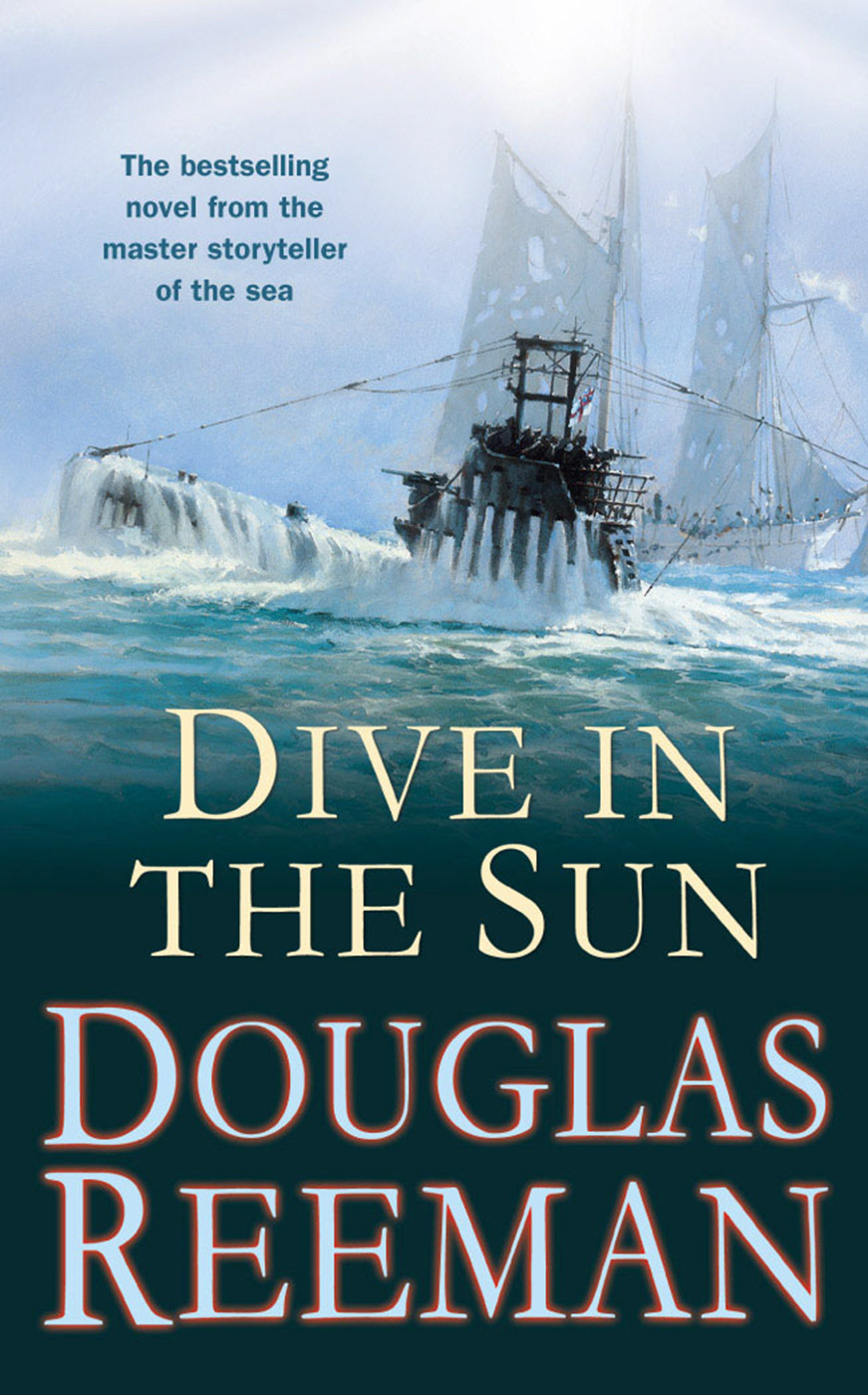 With the Allies poised for the invasion of Italy, the Germans hold a vital card: a floating dock, the only one in the Adriatic large enough to take a major warship.

Moored at a small port near Rimini, it is exposed, vulnerable. It must be destroyed before the Germans can tow it to a safer harbour.

Air, surface and conventional submarine attacks are out of the question. Only one team can do the job and still stand a chance of surviving - the crew of
HM Midget Submarine XE 510
.

Douglas Reeman
did convoy duty in the navy in the Atlantic, the Arctic, and the North Sea. He has written over thirty novels under his own name and more than twenty bestselling historical novels featuring Richard Bolitho under the pseudonym Alexander Kent.

A Prayer for the Ship

Path of the Storm

With Blood and Iron

The Pride and the Anguish

Go In and Sink!

Strike from the Sea

A Ship Must Die

The First to Land

Dust on the Sea

THE NIGHT WAS
moonless and very dark, and the black heaving water of the Adriatic moved uneasily in an oily, sullen swell. Occasionally the ebony water reflected a tiny pin-prick of light from one of the small stars, which seemed very high and aloof from the sea beneath, while from the invisible Italian coastline a small, hot breeze clawed weakly across the dull surface.

A watcher, had there been one, would have caught the briefest glimpse of a slender, stick-like object which rose rapidly out of the depths, throwing up a tiny feather of white spray as it cut through the water, like the antennae of a forgotten sea-monster.

The periscope vanished, as suddenly as it appeared, and for a short while the sea was again empty and desolate, then, with a surge of foam and spray, the sea was churned into a frightened torment, and the hard, streaming shape of the submarine rose gracelessly into view, the pressurised air hissing in a subdued roar, as water was forced from the ballast tanks, and the disturbed waves cascaded across the canting steel hull.

Within seconds, the confined space of the bridge above the conning-tower was filled with silent, purposeful figures, as the lookouts carefully scanned every inch of the surrounding area with their night-glasses, while on the casing below, the gun’s crew stood huddled around their weapon, their hands reaching for the prepared shells, and smoothing away the dampness from the controls.

The Officer-of-the-Watch relaxed slightly, as each man reported his horizon clear, and concentrated instead on adjusting the towel around his neck as a protection against the spray which drifted lazily over the squat bridge each time that the stem cut deep into the resisting waves. The electric motors died away, and were replaced instantly by the muffled
thud
, thud, thud of the powerful diesels, and he felt the air being sucked down into the open hatch behind him; air to feed the engines, which, in turn, would feed the starved batteries. In his mind’s eye he could picture the too-familiar scene beneath his feet. The relaxing grins of the seamen, as they prepared to enjoy that first cigarette after surfacing. The watchful eye of the First Lieutenant, as he studied the compass, and passed his curt orders to the coxswain. The metallic clatter of countless pieces of intricate machinery, and the gleam of subdued lighting reflecting against the brass dials and greased periscopes. He stiffened automatically as another figure clambered over the hatch coaming and took his place beside him.

The captain glanced perfunctorily through his glasses, and checked the lookouts, before he squinted at the luminous dial of his watch.

‘Just about time, Pilot,’ he said at length. ‘She’ll be popping up any second now!’

They trained their glasses over the rear of the bridge, their eyes straining against the darkness, and trying to peer beyond the green and blue phosphorescence which danced crazily around the submarine’s wake.

There was a strange air of tension on the bridge, and as the seconds ticked past, each man felt a rising edge of alarm.

Then, as they waited, the dark water took on a more definite shape, and slowly and painfully, the blurred outline of another craft rose quietly above the white track of their wake.

Occasionally the tow-line tautened and whipped angrily above the wave-crests, and the other craft would veer round unhappily before being brought under control by its hidden helmsman.

The captain chuckled quietly. ‘Well, there she is! Our midget submarine is still with us!’

He spoke lightly, but the other officer had watched him closely during the last six days and had seen all too clearly the immense strain on his captain’s thin face. Six days of bitter anxiety as they had towed the tiny submarine and its deadly cargo across the war-torn Mediterranean, from Malta
around
the “heel” of Italy, and steadily northwards up the hostile waters of the narrow Adriatic.

And now, nearly four hundred miles along the Italian coastline, his responsibility was practically over. It would soon be time to drop the tow and leave the little, fifty-foot miniature of his own boat to carry on with its dangerous mission.

He paused at the top of the hatch. ‘Call me the second you sight anything,’ he said unnecessarily, ‘and watch the tow-line. We don’t want anything to go wrong now!’

He clattered down the shiny ladder to the control-room, brushing past the next group of lookouts, who stood, their eyes covered with dark glasses, and smoking beneath the hatch, like a collection of blind men, and walked tiredly across to his First Lieutenant.

‘All clear, Number One,’ he nodded. ‘The midget has surfaced quite well, and I’ll be taking off the passage-crew any minute now. I’ll just have a word with her operational crew before they take over, and go over the details again with her skipper.’

‘I’d rather them than me, sir! People think
this
job is bad enough, but at least there’s room enough to stand up!’

The captain yawned and stretched his cramped shoulders, his eyes resting momentarily on the pale, tired faces of his men, and his nose taking in the sour odour of oil and sweat, of damp clothing and stale food.

‘It’s a long war,’ he remarked indifferently, ‘and I’ll never forgive Their Lordships for passing this towing job on to me. I’ve had to pass up several good targets because of it!’ He frowned as he thought of his silent torpedoes lying peacefully in their tubes, and of the merchant ships which had crossed his sights during the last few days. But his orders had left him in no doubt. He was to tow the midget submarine,
XE.51
, to a point thirty miles east of Rimini, and do nothing to arouse the enemy’s suspicion, or give them cause to suspect any hostile activity in what was practically “untried ground”.

The captain paused in his stride by the chart table and leaned the faded elbows of his stained jacket on the chart.

He checked the wavering pencilled line of their course and the small cross which marked the end of the journey.

‘They must!’ It was a flat statement. ‘In twenty-four hours’ time Italy will be invaded from the south and south-west by our chaps and the Yanks, and all hell will be let loose.’ He tapped the chart with a pair of brass dividers. ‘Here, the port of Vigoria—not much to look at, is it? But Intelligence and R.A.F. Recce have reported that the Jerries have got their biggest floating dock moored there. If the Allied invasion gets started all right in the south it’ll be their
only
floating dock which is big enough to handle their big stuff—cruisers and the like. If they got one whiff of what we’re up to they’d tow the blessed thing across the Adriatic to Split, and could do all their repairs there. It could make a big difference to their surface forces.’ He shrugged again. ‘So, Number One, our little friend is going to take care of it!’

They stood looking at the chart in silence, visualizing the harbour defences, patrol boats, mines, and the inevitable uncertainty of Intelligence reports.

‘We’ll rendezvous with them afterwards, as arranged, and tow ’em back. Simple, eh, Number One?’

A shadow darkened the chart table, and they turned to face the giant of a man who stood loosely beside them. All of six feet tall, he was powerfully built to the extent of clumsiness, but there was nothing awkward or slow in his square, unshaven face and cool, grey eyes, nor in the hard set of his jaw which jutted forward in a half-humorous, half-mocking grin. On the shoulder of his battledress blouse he carried the word “Australia”.

Lieutenant “Steve” Duncan, R.A.N.V.R., First Lieutenant of
XE.51
, eyed the two officers calmly, his big, square hands resting on his hips. He was most people’s idea of the typical Australian, outspoken, tough, and seemingly larger than life. When he spoke, his voice was surprisingly low and well-modulated, and his hard, Queensland drawl made an incongruous note in the humid control-room.

‘I’ve just been listening to you chaps,’ he remarked slowly, ‘and I’d like to point out that you’re talking the sort of
complete
drivel which I’m beginning to believe is typical of everything in this war that I hate most!’ He smiled gently, as if amused at the cold hostility in the submarine commander’s eyes or by the look of alarm shown by the other officer, as he darted a quick glance at his captain’s faded gold lace, which proclaimed him not only a regular officer, but two ranks senior to the Australian lieutenant.

The captain smiled thinly and pressed the palms of his hands against the edge of the chart table.

‘What is ailing our Colonial friend now?’ He had got used to his imperturbable passenger during the slow passage, and had somehow avoided any definite argument, but on several occasions it had been a near thing. The trip was almost over. He felt he could now afford the luxury of tearing the man’s arguments to shreds.

‘Well.’ Duncan rubbed his bristled chin pensively, his clear eyes staring hard at the dripping side of the hull, as if penetrating the metal, and already staring at his nearing objective. ‘I think this is a duff trip! I reckon it won’t matter a tinker’s damn if we go after the dock or let it stay where it is!’ He returned his steady gaze to each of the others in turn. ‘Furthermore, I guess that if the Allied invasion of Italy depended on the sinking of a blessed dock, it’d be a pretty crook effort! No,’ he shook his head slowly, ‘it’s just another small, crackpot scheme that some joker has had in London or someplace, and it’s snowballed into a “must”, something that everyone now thinks is essential.’ He guffawed deeply. ‘Only thing is, they forgot it’s going to be damn dangerous for some poor suckers to carry out!’

‘You mean, you don’t think you’re capable?’ The tone was cutting.

‘Capable? Well, isn’t that typical again? Just because some poor, ignorant Aussie has the effrontery to question the realism of his orders, you immediately take it as a personal insult!’ He shook his head sadly, but the deep crowsfeet at the sides of his eyes revealed the hidden humour he was finding so enjoyable. ‘We can do it all right! I’ve been in tougher spots than this before.’ He waved his hands vaguely. ‘All over the
joint
! Norway, up the Channel, and even down at Taranto. But those efforts were almost worth the sweat! No, we can do it all right, but I’m sick to death of being told to be a good boy, an’ die for my country. Whose country, for Chrissake?’