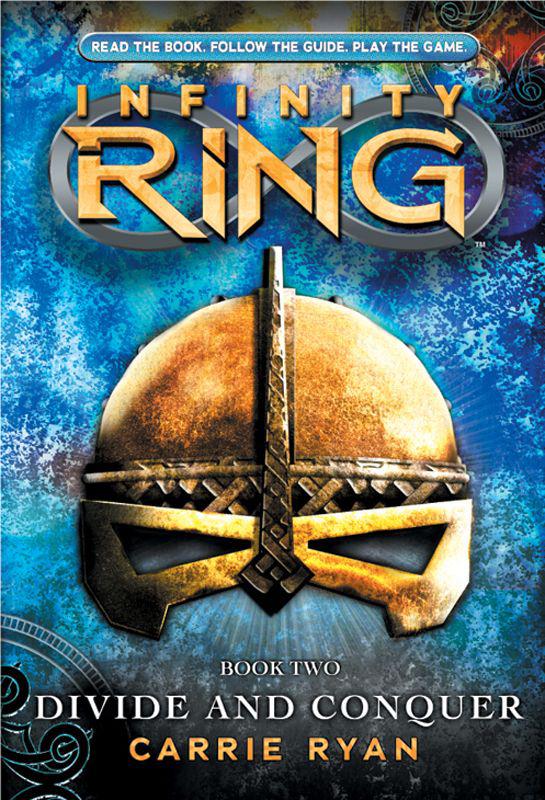 Welcome to Infinity Ring, a daring adventure through time!

It all starts here in the books, where you’ll discover a world in which history is broken . . . and meet the three young people who must risk their lives to set things right.

At the end of this book, you’ll find your very own Hystorian’s Guide. The Guide has been created to help time travelers avoid the dangers that await them in the past.

And you’re going to need all of the Guide’s tips, hints, and codes when you experience history for yourself in the action-packed Infinity Ring game. In the next episode of the game, you can explore Washington, DC, in the year 1814 . . . and it will be up to you to figure out how to put history back on track.

Fix the past. Save the future.

Another Fan of History

A Call from the Future

Connections from Long Ago

The Horns of War (Again)

So Close, So Far Away

Revenge of the Redcoats Hystorian’s Guide

S
ERA OPENED
her eyes. She was staring at the exact same wall she’d been facing when she’d closed them just a moment before. Her stomach tightened with anxiety. “That can’t be right,” she murmured.

She looked down at the Infinity Ring, grasped so hard between her fingers that her knuckles were white. “I know I put in the data correctly.” Just a few seconds ago they’d been standing in Paris in 1792, and then she’d felt the still-uncomfortable squeezing of her skin. It was the tightening of time and space around her as she moved from one era to another. And it should have brought her, Dak, and Riq to 885.

Yet here they were, staring at the same stupid wall as before.

“This is so cool!” Her best friend, Dak, stood next to her, running his hands over the uneven stones with a look of rapture on his face. Apparently he hadn’t spent enough time admiring it before they’d attempted to warp through time. It was bound to keep him occupied for a while. After all, Dak could get excited by something as boring as a wall simply because it was historical — and here,
everything
was historical.

She turned to Riq. He was the one who she didn’t know as well, and she hated the idea of him thinking her incompetent. “Sorry, I’m not sure what went wrong. This should only take a second,” she told him, her mind already whirring through the complicated mathematical equations to find the mistake. Riq shrugged, as though ending up in the wrong place and time was something altogether ordinary rather than an absolute catastrophe.

“Really, I think we must be dealing with some sort of hidden variable aspect to the quantum entanglement.” As her fingers flew over the Ring’s controls, Sera felt herself speaking a bit uncontrollably, explaining in painstaking detail the scientific theories behind the warping of space and time. She tried to force her mouth closed, but she couldn’t help it. When she got nervous, she talked.

Riq kept his focus on the wall, a frown furrowing his forehead. “I could have sworn this wasn’t there before,” he said, his fingers tracing over a series of scratches in the stone.

“Check it out! There must be thousands of them!” Dak had found a series of footholds and managed to climb to the top of the wall. He was staring out beyond it at something in the distance. Then he looked down at Sera, his entire body vibrating with excitement, like the time (was it really only a few days ago?) that the two of them had gone on a class trip to the Smithsonian.

That hadn’t turned out well — an earthquake had struck and they were almost crushed by a Viking longship on display. Just thinking about it gave Sera a dawning sense of unease. “Dak, maybe you should get down,” she called out. “I’m not sure —”

For a split second Dak looked confused but then he did as he was told, flattening himself against the top of the wall. Just then a storm of rocks and debris came hurtling through the air, raining down around the three of them. The wall shuddered at the impact.

Sera pressed the Infinity Ring to her stomach to protect it as Riq lunged forward, throwing himself on top of her. Now probably wasn’t the best time to realize
that none of them had showered in several days, and smelled like it.

Then Sera had another realization. If the arrows slicing through the air around her weren’t enough of a clue, the moment she actually took in her surroundings all thoughts of quantum entanglement fled her mind. The warp hadn’t failed after all.

Where before there’d been the elegant flying buttresses of Notre Dame Cathedral, with its intricately patterned windows, there now sat a dull, plain hulk of a church with thick, bare walls. A palace still occupied the western end of the Île de la Cité, but no longer did it dominate the tip of the island with its impressive turrets and elaborate facades. Everything was different than it had been a minute ago, from the width of the streets to the uneven construction of the buildings to the sounds of men running for cover. Now that she really looked, Sera realized that even the wall Dak had scaled was different. Whereas in 1792 they’d taken refuge against the scrap of an old ruin, now the wall stood strong and sure, rising several yards in the air and securely ringing most of the island.

Leave it to a genius to miss the obvious
, Sera thought.
This
definitely
isn’t 1792.

Wave after wave of arrows and rocks pounded into the ground and crashed into nearby buildings. Sera wondered if it would ever end. Somehow, when the three of them had agreed to travel through time fixing the Breaks in history, she hadn’t seriously considered the danger they’d be in.

But so far, time travel had offered up one life-threatening peril after another. Starting with the very first trip, when Dak and Sera had warped with Dak’s parents to test the brand-new Infinity Ring. They’d ended up in the middle of a Revolutionary War battle, with uniformed men running at them with guns and bayonets at the ready. The group had barely made it out alive — and they’d been separated from Dak’s parents in the process.

Sera wasn’t ashamed to admit it: She was scared. She and Dak were just eleven years old and Riq wasn’t much older — having the fate of the world in their hands felt a bit overwhelming.

When the rubble stopped falling and Riq pulled away, she noticed that he seemed a little shaken, too. At least she wasn’t alone.

Of course, then Dak called out, “That was awesome!” from his perch.

“How did you know to tell him to duck?” Sera asked Riq. Whether Dak realized it or not, the warning had probably saved his life.

Riq pointed at the wall. “The picture scratched into the stone — it’s a duck. That we would warp into this exact spot and be facing this . . . I figured it might be a message for us somehow, and I didn’t want to take the chance of ignoring it.”