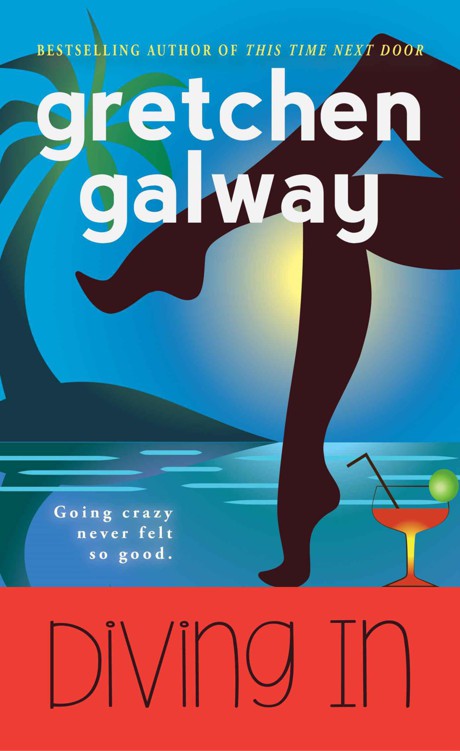 F
or schoolteacher Nicki Fitch, a summer in Hawaii is the perfect opportunity to overcome a lifetime of phobias and heartbreak. But when she gets to Maui, she discovers the guy who broke her heart in college is living in her paradise. How can she tackle her fears when the biggest one of all is walking around shirtless—and refuses to leave her alone?

About to turn thirty, Ansel has never wasted his life of privilege—if only his father saw it that way. When Dad cuts him off financially, Ansel moves into his family’s vacation home to make his own fortune in real estate. The last thing he needs is his sister’s leggy, beautiful friend distracting him. Unfortunately, he’s had little practice resisting temptation.

As the days and nights unfold along the luxurious Maui shores, Nicki and Ansel find themselves sharing more and more… and more. But will either one of them have the courage to bring what they find together home with them when the summer’s over?

All rights reserved. Except for use in any review, no part of this book may be reproduced or transmitted in any form or by any means, electronic or mechanical, including photocopying, recording, or any information storage and retrieval system, without prior written permission of the Author.

All characters in this book are fictitious. Any resemblance to actual persons, living or dead, is purely coincidental.

A
S
SHE
WATCHED
THE
LOVE
of her life stick his tongue into another woman’s mouth, Nicki Fitch realized she’d made a terrible mistake.

She’d walked into her friend’s kitchen for coffee, not sexual humiliation.

“Oh, Lucy,” Miles moaned. Eyes closed, he leaned against the kitchen table, lifting a petite redhead off the floor to insert his tongue deeper into her mouth. The woman, engrossed with the oral probe, didn’t see Nicki either. “Lucy, Lucy, Lucy.”

This isn’t happening
. Her chest tightening, Nicki stared at Miles’s handsome head under the ten delicate, womanly fingers clutching it.

Why was he in Betty’s apartment? They shouldn’t even know each other. And why was he kissing somebody? He’d just been through a serious breakup. Nicki had been working up the courage to—

“Oh, Miles,” the redhead gasped. The vintage table banged against the wall. The pair kissed for so long Nicki wondered if the woman had SCUBA tanks hidden under all that hair.

How
could
he? He should still be depressed from his last girlfriend throwing soda cans at his head when he asked her to marry him. She, Nicki—his
friend
—had comforted him. They’d talked late into the night over Panang beef. Joked about being hopeless with the opposite sex. Reaffirmed the importance of real, lasting friendship based on mutual respect, common interests, and laughing at the same jokes. Usually she had to rely on her seventh graders to appreciate—however reluctantly—her compulsive joke-telling, but Miles
always
appreciated her bad jokes, the badder the better.

“Oh, Lucy,” Miles repeated. Each of his massive hands spanned a well-rounded butt cheek to lift her higher.

I think I have the wrong idea of what badder and better is
. Nicki sagged against the kitchen doorway.

When was the last time a guy kissed
her
like that? She was thirty, so—she counted back through the years—one, two, three…

Never. Yeah, never was about right.

“Oh my God, not again,” Betty said behind her. “If I want to see heterosexual courtship, I’ll watch a nature show on TV.”

Miles didn’t move, but the redhead broke the suction. “Sorry, Betty.” She patted him on the shoulder to release her, and when that had no effect, she pinched his nipple through his UC Berkeley T-shirt.

With a yelp, he loosened his grip and turned to the door. “Hey there, Betty.” Then he saw Nicki, and his smile fell.

This is it
. A skateboarding thirteen-year-old did a back flip in her abdominal cavity.
This is the moment he realizes he loves me, hopes I love him, that we’ve just needed to be mature enough to admit we’re both ready to get serious, settle down, give up on shallow, frivolous sexual relationships, and devote our lives to the deeper bond between us.

His face broke into a grin. “Hey, Nicki! What are you doing here?”

She couldn’t believe it. No sign of discomfort, guilt, or regret. Not even a tiny bit.

Still smiling, he moved away from the table, rising to his full six and a half feet. The woman in his arms plopped to the floor next to him, the top of her blazing copper head reaching only as high as his pinched nipple. Long strands of her red hair, still attached to Miles’s stubbly jaw, stretched between them like telephone wires spanning a mountainous countryside.

Since when did he like petite women? His previous girlfriend had been tall. Nicki had hoped that since she, too, was tall—and on the broad side—maybe… someday…

“I’m here to see Betty,” Nicki said, her tongue dry and clumsy. “She’s a friend of mine.”

“You guys know each other?” Betty asked, one black eyebrow arching into her green bangs.

Nicki taught history at a local junior high. “School connection,” she said, swallowing. “He runs the youth center. Some of my students go th—”

Miles put his index finger over her lips and turned back to the redhead.

“I’ve been meaning to introduce you.” He took Lucy’s hand and pulled her over, looking as excited as a talk show host reuniting two loving sisters tragically separated by decades of war. “Luce, this is a teacher friend of mine, Nicki Fitch. Nicki, this is my fiancée—I know, I know, don’t laugh, it’s true—Lucy Hathcoat.”

The redhead leaned in to offer her hand to Nicki, but her pretty green eyes were sharp, observant. “Nice to meet you. What do you teach?”

It took Nicki a second to look her over. Her black T-shirt hugged her small curves and her skinny black jeans were skin-tight. She had a vision of that old
Grease
movie where the goody-goody fifties girl shows up in skin-tight black leather.

If I dressed like that, would things be different?
All those dinners, drinks, movies—and my plans for us in the future—but I never made a move.

“She’s the most popular teacher in school,” Miles said. “Practically a legend.”

Students and parents loved her, that was true, but it was entirely different from the kind of love that got you naked.

“Wow, you must be really grounded,” Lucy said. “I barely survived junior high the first time around. I can’t imagine going back. I’d probably use it as an excuse to get even.”

“Even for what?” Miles’s broad, friendly face wrinkled with confusion.

Lucy rolled her eyes at him. “I bet you were big and popular. Never had anyone pick on you.”

A grin split his face. “I’d sit on anyone who tried.”

“That didn’t work for me,” Lucy said.

“I don’t know.” He slung a hand down her back and lowered his voice. “I get nice when you sit on me.” He bent down and nuzzled her neck.

Nicki’s hands started to sweat.
I need to get out of here
.

Flushed, Lucy dragged her gaze away from Miles and rolled her eyes apologetically at Nicki. “Sorry.” She pushed Miles away. “We’re being really annoying.”

Don’t worry about Nicki
, Nicki thought, lost in his handsome face. Obviously,
he
never had. She forced her lips into a smile. “Your ex is the one who chucked you, remember?”

“And I have the scar to show it.” He rubbed his forehead. “Can of Red Bull, right here. Violently unstable, that one. I’ve learned to go for the calm and logical types.” His melting gaze drifted back to Lucy.

Betty sighed. “Don’t get scared off. Lucy just came by to say hi, but Miles had to follow her here and try to get in her pants, which is kind of getting old, but whatever,” she said. “We can talk about your next Phobic Phoebe post in the other room. I’m not sure I want you writing about so much hetero angst on my site.”

Nicki flinched. She’d been writing a weekly post for Betty’s popular blog,
Betty Me than You
, for over a year as Phoebe and often had to remind her to keep it secret. But coming out as a lesbian in high school had made Betty militant about being open, very open, about everything. Way, way too open. There was no TMI with Betty, one reason her blog was such a hit.

Oh, God. The redhead was a fan. It was going to get worse.

Eyes twinkling, Lucy said to Nicki, “I loved the one you wrote about overcoming a fear of public speaking. I’m impressed, I’ve never been able to do that. I’d never guess you were a teacher.”

Nicki smiled weakly. She didn’t want to talk about the blog. One conversation would lead to another, and soon everyone would make the connection…

“You can survive almost anything if you put your mind to it,” Nicki muttered.

Miles stepped forward and jabbed her shoulder. “You never told me you were a writer.”

Forcing a laugh, Nicki shoved her hands in her jeans pockets. “It’s nothing. Just a fun hobby.”

“Phobic Phoebe, huh?” He grinned. “You write about all those fears of yours? That’s excellent. I’ll have to check it out.”

He knew all about her crazy anxieties—water, bridges, heights, elevators—but that wasn’t what she was hiding.

“I’m so glad to meet you. You’re so funny,” Lucy said, laughing. “I love it when you write about that guy you’ve got a thing for, the way you describe his ass, how he manages to be cute even though he’s totally enormous—” She cut herself off. After a long moment, her gaze darted to her six-five, two-fifty boyfriend.

Nicki could almost hear the wheels under the red hair grinding to the painful, humiliating conclusion.

Nicki broke out into a cold sweat.
I’ll never be able to look at him again.

Betty sighed. “You should’ve told me. I could’ve told Lucy to leave his big butt at home.”

Lucy whipped the phone out of her pocket like a cop in a shootout. “Look at the time.” She put a hand on Miles’s arm and took a step toward the door. “Miles, I think we’d better get going.”