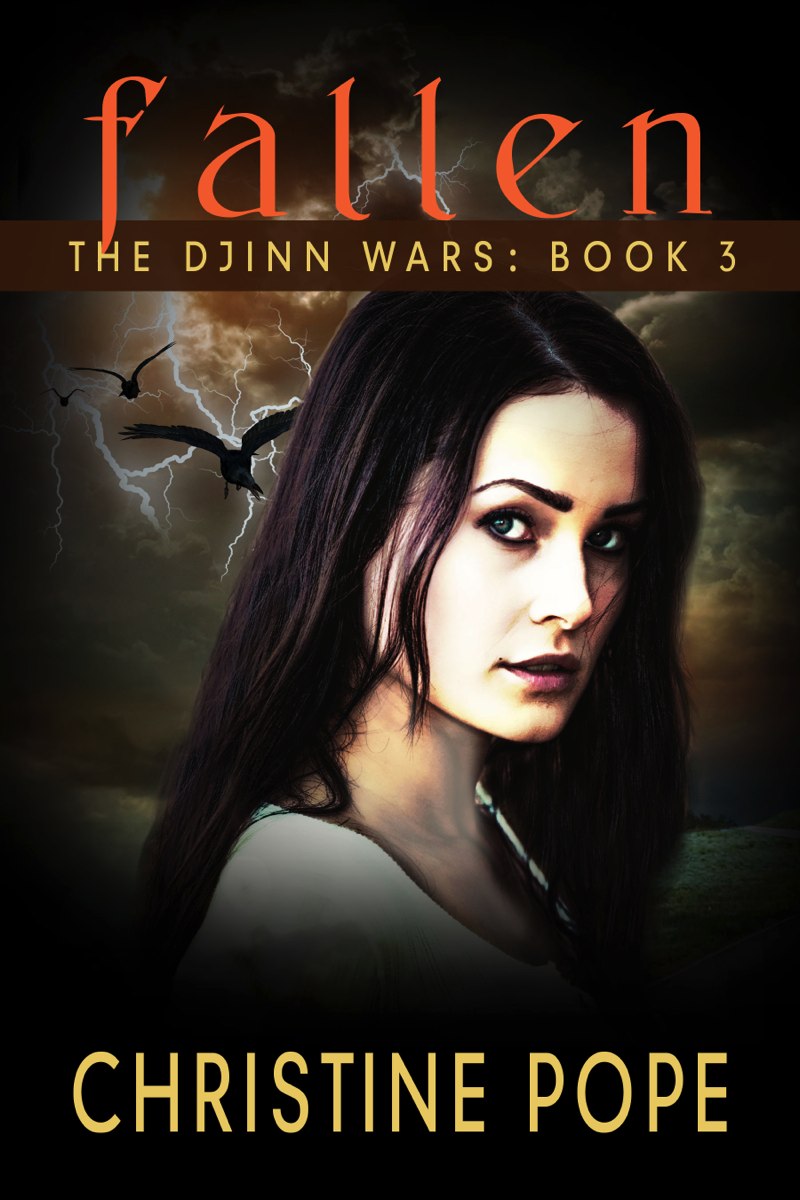 Book 3 of the Djinn Wars

This is a work of fiction. Names, characters, places, and incidents are either the product of the author’s imagination or are used fictitiously. Any resemblance to actual events, places, organizations, or persons, whether living or dead, is entirely coincidental.

All rights reserved. No part of this book may be reproduced in any form or by any electronic or mechanical means, including information storage and retrieval systems — except in the case of brief quotations embodied in critical articles or reviews — without permission in writing from its publisher, Dark Valentine Press.

Please contact the author through the form on her website at
www.christinepope.com
if you experience any formatting or readability issues with this book.

Eventually, Lindsay Adarian and I summoned the courage to emerge from the repair shop where we’d been hiding and blink up at the sky. It was still somewhat gray and lowering, but in an ordinary late winter sort of way. No livid clouds the color of a bruise, no circling, angry djinn. Nothing supernatural about it at all.

We knew better, though.

Lindsay stood on the crumbling concrete step outside the shop’s main door and shook her head. “It’s hard to believe that tiny thing” —and she pointed at the little black box I still held clutched in my cold and shaky fingers— “is holding off an entire army of djinn.”

“Well, thank God it is, or we wouldn’t be having this conversation right now.” I glanced around but saw no one. Not that I’d really expected to; who would have the courage to come outside after that near-attack? The Chosen would be terrified, and the djinn probably not in that much better a frame of mind, their powers now more or less shut down by Miles Odekirk’s device.

But then movement down the street caught my eye, and my heart began to beat a little faster. Not from fear, though. Even at this distance, I recognized that purposeful stride, the long black hair blowing in the harsh breeze.

As soon as he caught sight of me, he began to walk even faster. I had to wonder where he got the energy, considering how much the box I was holding seemed to steal away the very life force of the djinn, leaving them listless and not much of a danger to anyone.

I didn’t have to wonder for much longer, because in the next instant he was there, pulling me into his arms, crushing the device into my sternum. Not that I cared too much; right then it was just good to feel his arms around me, to hear his voice say my name.

“Jessica, so it was you, wasn’t it? Zahrias said I shouldn’t venture forth to look for you, but I couldn’t hide in the resort like a coward, not when you were out here alone.”

“Not exactly alone,” I told him, pulling away slightly so I could nod in Lindsay’s direction. “But considering how we both just got the crap scared out of us, I think I can safely say we’re
very
glad to see you.”

“That’s for damn sure,” Lindsay put in as she approached, still shooting those wary glances skyward, as if she expected the djinn to return at any second and rain holy hell down upon us. “Glad to see you’re so…mobile.”

Jace’s mouth twisted. “I suppose that is one thing for which I can thank Captain Margolis and Miles Odekirk. It seems that all those weeks under the influence of that device have made me a bit more able to tolerate its effects than the rest of my people. At any rate, while I am tired and wish more than anything that you could shut it off, I can still function, more or less.”

“You’re amazing, you know that?” I said, then went up on my toes so I could give him a kiss on the cheek. His skin felt cool beneath my lips, but maybe that was only because of the cold wind blowing on us and not because of the device’s influence. Well, I could hope, anyway.

His shoulders lifted a fraction of an inch, as if to brush off the compliment. “I’m not sure about that. There was no way I would wait any longer before coming to make sure you were all right. But now we must get back to the resort. Zahrias wishes to speak to you.”

“Good,” I said grimly. “Because there are one or two things I’d like to bring up with him as well.”

The draining effects of Odekirk’s device were a bit more obvious on the djinn leader. Zahrias was paler than I’d ever seen him, and, rather than standing, as he preferred to do during these sorts of convos, he sat in a chair by the hearth, where a fire crackled away. Despite that, the room was fairly chilly, and I didn’t bother to take off my coat, but only unbuttoned it. And I could tell from the way Zahrias seemed to shiver beneath his heavy brocade robe that the blazing fire wasn’t helping him all that much, although he sat so close to it that I worried a spark might fly out and set fire to his clothing or hair.

Lindsay had gone to check on her own lover, leaving me to attend this briefing with only Jace at my side. Just as well; her usual composure seemed to have deserted her, and I sort of doubted she would have been able to make a very cogent report on what we had seen circling in the skies above Taos. Better that she have some alone time with Rafi while she attempted to restore her frayed nerves, rather than be subjected to Zahrias’ questions.

“I suppose I should commend you on your quick thinking,” he said, tone wry despite his obvious discomfort. His gaze strayed the side table where I’d placed the device and then moved back to me. “But as it has only made all of us djinn mostly useless….”

“Would you rather be dead?” I asked. Beside me, Jace shifted, although he didn’t bother to protest my harsh words. We all knew they were only the truth.

“No, of course not,” Zahrias replied. Lips compressing to a hard line, he glanced up at Jasreel. “I see now what you mean. This is very…unpleasant.”

“That’s one word for it.” Jace faced the other djinn squarely, arms crossed over his chest. Unlike Zahrias, he was wearing regular, “mortal” clothes — a dark sweater and faded jeans, motorcycle boots. In different circumstances, I would have found his current attire almost insanely hot. Unfortunately, I had other things occupying my mind at the moment. “But, as Jessica pointed out, it is still better than the alternative.”

“And about that,” I put in, watching as Zahrias’ expression grew shuttered. While he didn’t exactly look away, neither did he meet my gaze directly. He knew what was coming next, and didn’t want to discuss it…probably because, like the rest of us, he had no answers. But I had to ask anyway. “Just what the
hell
is going on? I thought you had a truce with the other djinn, that they had sworn to leave the One Thousand and their Chosen alone.”

It was my turn to cross my arms. “Well, it seems like someone on the other side didn’t get the memo, because that sure looked like a whole bunch of pissed-off djinn to me. Not that I claim to be an expert. Please, tell me I’m wrong.”

“You are not wrong,” Jace said, and Zahrias gave him a pained look. Appearing to ignore his leader’s glare, Jace went on, “I saw them. Or rather, I felt them coming. We all did. It was the sort of gathering of our kind that is impossible to ignore. As they moved in above us, I tried to call out to them, to ask what they were doing here, but they acted as if they couldn’t hear me. Or at least they pretended not to.”