Read Doctor Whom or ET Shoots and Leaves: The Zero Tolerance Approach to Parodication Online

Doctor Whom or ET Shoots and Leaves: The Zero Tolerance Approach to Parodication 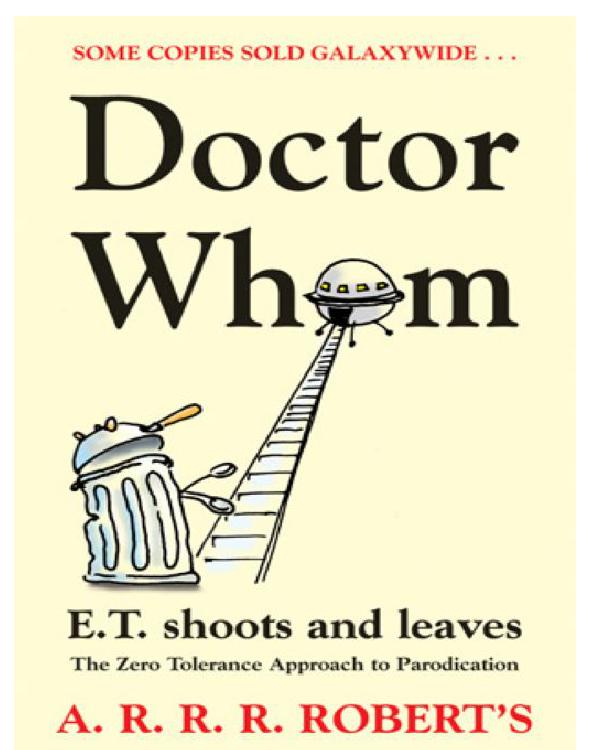 Table of Contents
Title Page
Copyright Page
Chapter Twelve - THE END
Chapter Two - THE DIMENSIONS OF THE TARDY
Chapter One - THE INTERVIEW
Chapter Four - THE DOOM OF THE ICETANIC
PROLOGUE
Chapter Seven - THE DR RE-UN-DEGENERATES
Chapter Three - THE TIME GENTLEMEN’S CONVENANCE
Chapter Six - THE SLUTTYTEENS
Chapter Nine - BETRAYAL !
Chapter Five - THE NEAR MAGICAL DISAPPEARANCE OF THE WATER INTO THE TARDY TOWELS
Chapter Eight - THE DOOM OF THE HELL-MET WOMAN
Chapter Ten - THE GENESIS, DEUTERONOMY AND BOOK OF TOBIT OF THE GARLEKS
Chapter Eleven - ‘MEET ME— ET!
SPECIAL OFFER! SPECIAL OFFER! SPECIAL OFFER!
THE MONSTERS OF DR WHOM
Also by A R R R Roberts from Gollancz:
The Soddit
The Sellamillion
The McAtrix Derided
Star Warped
The Va Dinci Cod

Orion
www.orionbooks.co.uk
Copyright © A. R. R. R. Roberts 2006
All rights reserved
The right of A. R. R. R. Roberts to be identified as the
author of this work has been asserted by him in accordance
with the Copyright, Designs and Patents Act 1988.
First published in Great Britain in 2006 by
Gollancz
An imprint of the Orion Publishing Group
Orion House, 5 Upper St Martin’s Lane,
London WC2H 9EA
This edition published in Great Britain
in 2007 by Gollancz
1 3 5 7 9 10 8 6 4 2
A CIP catalogue record for this book
is available from the British Library
ISBN 978 0 5750 8577 0
Typeset by Input Data Services Ltd, Bridgwater, Somerset
Printed in Great Britain at Mackays of Chatham plc,
Chatham, Kent
The Orion Publishing Group’s policy is to use papers that
are natural, renewable and recyclable products and made
from wood grown in sustainable forests. The logging and
manufacturing processes are expected to conform to the
environmental regulations of the country of origin.
www.orionbooks.co.uk

PREAMBLE
The extraterrestrial pointed his oddly-shaped weapon at the Dr. ‘This is the end,’ he said. ‘This is goodbye
forever
, Doctor! No longer shall your kind oppress the Galaxy with your terrible grammatical correctitude—’
‘—ness,’ corrected the Dr, in a small voice. Even though he had his arms up, and a gun pressed against his chest, he couldn’t help it.
‘You
die
now!’ screeched the infuriated ET.
‘Don’t be so sure!’ said the Dr, defiantly. ‘You’ll find I’m harder to kill than you might assume . . .’
‘Not
this
time, Doctor. Do you see what I’m holding in my hand? It’s a TGV.
Oh
yes.’
‘No!’ gasped the Dr, his face paling. By which I mean, becoming more like a paling. You know: thinning, and acquiring the metallic sheen of terror. ‘A Time Gentleman Violator? But those weapons are
outlawed
by the convention of—’
‘Outlawed, yes,’ agreed the ET. ‘Despised and condemned by all civilised people in the Galaxy. And why? Because they are
deadly
to Time Gentlemen! The
only
weapon that bypasses your infuriating ability to
re-un-degenerate yourselves
at the moment of death!’ The ET laughed. It would be a cliché to say he laughed maniacally. A cliché, but nevertheless true. He laughed like a maniac; a little green spacealien maniac. His laughter was mainy. Maniac-like. Manicalesque. Then he spoke: ‘Oh the adventures I had! The money I have spent! The crosses I have doubled! And all to obtain this little weapon - and to arrange matters such that I could be here, now, able to point it at you, Doctor, and pull—this—trigger.’
‘I still don’t see,’ said the Dr, ‘how you were able to trace me
here
?’
‘You don’t see?’ said the ET. ‘Why, you have a traitor aboard your TARDY, dear Doctor! One of your companions has betrayed you!’
‘No!’ the Dr gasped, spinning about to stare at the two of us. ‘One of you two? But I trusted you! I showed you the galaxy! And you
betrayed
me . . .?’
We were too shocked to reply.
‘Only
one
of them betrayed you, Doctor,’ said the ET. ‘Now I could tell you which one . . . but, you know what? I think I prefer to kill you
without
letting you know! I
like
the idea of you going to your ultimate death with that little irritant nagging in your brain.’
‘Wait—’ the Dr cried, starting forward, his hands raised before him. ‘You mustn’t—you couldn’t—you daren’t—’
The ET pressed the muzzle of his weapon close up against the Dr’s chest, so as to be quite sure there was no chance of the shot going wide.
He pulled the trigger and the hideous weapon discharged. Its explosive bolt of time-energy crashed catastrophically into the Dr’s torso.
‘You dared!’ the Dr gasped, staggered back. ‘You could!’
‘I
musted
,’ said the ET, triumphfully. ‘I
did must
.’
‘I’m dying,’ the Dr rasped. ‘Quick . . . loosen my tie . . .’
‘No!’ cried Linn, rushing to the supine form of the Dr. ‘It cannot be!’
‘It can, it are,’ said the ET. ‘And now, after I am shot you in the body, I shall be off. The blow has been struck! We can stick our temporal apostrophes - or indeed, apostrophe’s - where-ever the Punc we like! The tyranny of grammar is at an end!
I
is leaving.’ And so the ET, having fatally injured the Dr, walked back to his unconventionally shaped time-and-space ship, stepped inside and closed the door behind itself. A moment later the craft shimmered and faded from existence.
And we were stranded with a dead Dr.
Behind us, in the recesses of the room, strange monstrous forms of life writhed and seethed in their green-lit tanks.
Well.
Or maybe it didn’t happen
quite
like that. But I think I’ve captured the gist of it.
Oh, I’m sorry? Did you want
more
than the gist?

Chapter Twelve
THE END
‘Well,’ said the Dr, standing at the control panel. ‘Everything seems to have worked out alright in the end. Again!’
I snuggled into the arms of my new love; and she snuggled into mine. Not to put too fine a point on it, we snuggled into one another’s arms. It was snug. ‘I never thought I’d see this day, Doctor,’ I said. ‘I truly believed that my happiness boat had sailed. That my happiness rocket had blasted off into orbit without me in the cockpit. That the happiness tortoise has crawled off just out of my reach.’
‘Can I drop you two lovebirds anywhere?’ the Dr asked. ‘It’s on my way.’
‘How do you know it’s on your way,’ my beautiful partner asked, from the cradle of my arms, ‘if you don’t know where we want to go?’
‘Everywhere’s on my way,’ said the Dr. ‘That’s the beauty of a craft like the TARDY.’
‘It almost feels,’ I said, ‘too good to be true! It’s almost as if it’s too good for me to believe it.’
‘Tush,’ said the Dr. ‘Don’t say that.’
Oh it seemed like the happiest of happy endings! But in my heart, inside that heart, in the heart inside my heart, I knew that it wasn’t. I knew that it was something the reverse. ‘There’s the outstanding matter of the hydrogen atom . . .’ I said, prompted by my nagging conscience.
‘The hydrogen atom,’ repeated the Dr nodding sagely.
‘
The
hydrogen atom?’ asked my love. ‘Singular case?’
‘Yes. There’s only one, apparently,’ I said.
‘Well, we’ll cross that bridge when we get to it,’ said the Dr. ‘Don’t worry about it. As we stand, we’ve ridden the cosmos of an unspeakable evil. We’ve sorted out your love life. We’ve averted what seemed like inevitable destruction. I think we can afford to cut ourselves a little slack.’
‘Take us to the star Thpops,’ I said; ‘and the world Tapov, where the dancing never ends. Take us both there so that we can get on with the rest of our lives!’
The Dr touched the panel. ‘With the greatest of pleasure. ’
And so we hurtled through time and space. But like I said; appearances can be deceptive, and a happy ending need not, perhaps, be so happy as all that.

Chapter Two
THE DIMENSIONS OF THE TARDY
The TARDYis bigger on the inside than on the out. That is, of course, the fact that anybody who has seen the Dr’s craft remembers about it. But few people think through the implications of this state of affairs.
For example: toilets. The smallest room in a TARDY is actually, of course, the
biggest
room. Going to the loo involves sitting on a porcelain pan in the middle of an empty aircraft hangar. Breezes moan and whisper in the rafters. The toilet paper chitters and flaps in the holder at your side. It is intensely cold.