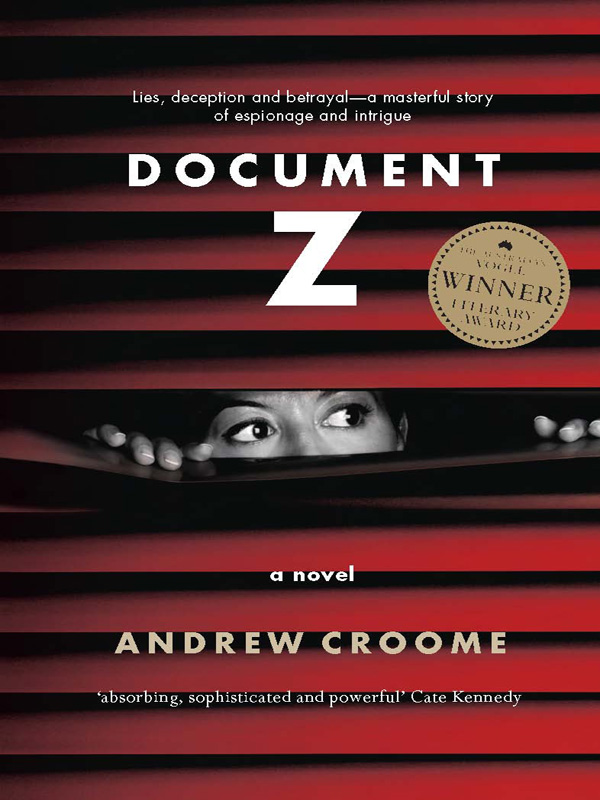 Cataloguing-in-Publication details are available
from the National Library of Australia
www.librariesaustralia.nla.gov.au 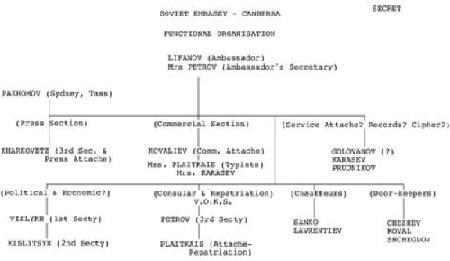 The car was so long it had the look of a hearse. The crowd watched it arrive via the slip road, an American car of all things, a colossal black Cadillac limousine, hard-tailed and polished. Not quite speeding but not going slow.

The man who stood before it made a lonely figure in a long coat. He raised a hand into the light from its nearing headlamps and set one foot forward. The crowd waited to see. The Cadillac showed no indication of slowing. For a moment it looked as if man and machine would meet. Then quickly the car veered, tossing up some gravel on the roadside, shooting past the man who turned and shouted something about a sign. Something about an insignia. And before the Cadillac quite reached them, the crowd had flooded its path. They were night breath; forty or fifty people in suits, coats and hats. The car stopped and they surrounded it, peered into its dark windows, a strange feeling overcoming them: acidic and tightening, as if this week's newsprint had entered their bodies and formed there a second blood.

Somebody swore that they could see her. People began trying the handles on the doors.

Staring out the window of the Cadillac, Evdokia knew this crowd was here for her. They were hunting her. They were here to prevent her escaping through the terminal, onto the plane.

The driver, Sanko, high-beamed the lights and revved the limousine hard. The crowd was tapping on the window glass. Evdokia could see angry, desperate expressions on those nearby. Moscow's courier, a man named Karpinsky, turned from the front passenger seat and announced a plan to rush the terminal. Madness, Evdokia thought, though it was madness too not to move. Beside her, Zharkov thrust the door open. She stepped out and was immediately grateful for the man's girth. People everywhere. A silence and then a rising. Just close your eyes, she thought. Keep your feet marching like the Pioneer Youth. In front of her, Karpinsky threw a man to the ground. She heard the click of his skull on concrete, and in the next moment the crowd's voice erupted. The shoving began. She kept an arm on Zharkov and the crowd was targeting him, targeting her, or both.

This might be it, Evdokia realised. A chaos building, a climbing potential. Her escorts had revolvers in their jackets. If it was Moscow's instruction, they'd do away with her here, deliver a misdirected shot amongst these scrambling bodies. Defector's Wife Dies in Airport Riot.

They weren't going to reach the terminal. She and Zharkov were being pushed sideways, heading along the building's edge. She thought maybe there was blood on her gloves, a light red mist. Zharkov locked his arm to hers as they hurried through a gap in a fence and found themselves suddenly on the open tarmac.

An ocean of protesters here. She could not believe it, the number of people, the lights and the shadows. The plane stood distant at a hundred metres. They passed two lone A-frame barriers, overturned, and then three policemen suddenly joined them. They formed a group, a tight, triangular formation: Evdokia between Zharkov and Sanko, Karpinsky with the police in front.

How many people on the apron? One thousand? Two? The protesters roared when they saw the group. The people began to swamp towards them, to push and snarl. Evdokia wanted to stop. She wanted to stop and turn and run. Zharkov at her elbow, insisting otherwise. The crowd's ferocity exponential.

A man with a microphone jogged at their side. âYou can undoubtedly hear the noise going on. Press photographers' bulbs are flashing. People are screaming all around me. Does Mrs Petrov want to go? “Don't let her go,” the people are yelling. “She doesn't want to go!” '

She tried to increase her pace and lost a shoe. It came off and her toes scraped against the tarmac. No way to stop. She looked behind to see the shoe held aloft, following like a trophy for the brave.

The plane loomed, an enormous cylinder in the darkness. One of the policemen was swinging his cudgel like a machete in a rainforest, leading them straight for the aircraft's stairs.

âWhy don't you stay in Australia? In Moscow, they'll kill you!'

It was a surprise to find her foot on the first step. The staircase rocked as she climbed, and people's hands reached up from beneath the railings, ferociously trying to grab her. There was a terrific shudder when the stairs were pulled free of their moorings, suddenly shifting on their wheels. She heard shouts and screams. Below, the police were beating a man who held the stair's controls in his hands and was refusing to let go. He absorbed the blows like someone being flogged, bending as if shackled to the levers.

Evdokia continued to climb. An official from the plane had come to her side and they were ascending together, a metre from the top, when the stairs finally rolled back into place. Evdokia looked up to see Philip Kislitsyn, the embassy's second secretary, holding the railings with arms outstretched, trying to make the staircase stay flush against the plane.

On the last step, she lurched over a slight air-gap, finding herself inside the plane and its pale, passive light.

When the door was closed, the noise outside fell strangely dead. Zharkov and Karpinsky stood, wiped their foreheads. She could see the shock still on Philip Kislitsyn's face. He brought her a glass of brandy that tasted like fuel.

Karpinksy said the crowd was retreating. Zharkov looked through a window and said they were regrouping to attack the plane.

Evdokia sat and awaited whichever. The minutes passed and she fell into a quiet trance, thinking of her husband, herself, her sister. Everything he had betrayed.

L
ockyer Street was as wide as the streets in a Hollywood dream. The house was a bungalow with bricked pathways and a raised landing, and it sat snugly on its block, hedged by low bushes and a cypress tree. They arrived late in summer. She was expecting palm trees but there was only incandescent heat.

They called it a suburb. Pines and pin oaks. The houses were square bodies with triangular roofs and white window frames, driveways and edged lawns and paths to their front doors. Afternoons, a group of boys would seize the street, gaming with a bat and ball, their shouts punching off the asphalt.

It was a strange town where the roads were curved by design. It was a place for sweeping around in cars.

Their backyard was enormous. A clothes line of strung steel sat alone at the centre like some antennaed monument. Their kitchen was enormous. The oven was new and all its fixtures were bakelite. The bedrooms and the lounge provided enough space for five Moscow families. Evdokia sat on the back porch and imagined she was Mary Pickford in a breakfast robe.

On the way to Manuka was a large white chest called the Capitol Theatre. She walked there, hoping to find a schedule of theatrical performances. The building was a picture house. Nearby, the Forrest Newsagency sold magazines. She bought
Australian Women's Weekly
for the article âHow to be a Woman'. Act dumb, it read. Don't talk about politics, economics, or your theories of relativity.

The weather was knife-blue skies.

She lay awake beside Volodya, wondering if it was possible to be unhappy in a country such as this, where the shopping centres were white-stone temples, where fruit stores sold their produce in the open air, peaches and strawberries in huge boxes.

And the children were so healthy. If there was to be a diffi-culty living here, it would be their rhapsodic brightness and its propensity to break her heart. They came tumbling from the schools, little girls in high white socks and pleated skirts. It was the kind of pain that couldn't be helped, Mothercraft Centres everywhere you looked.

She imagined Irina with her now. Irina on Lockyer Street in a blue skirt, skipping. Irina leaping into Volodya's arms.

Wear silly shoes, said the magazine. Sensible shoes may be more comfortable, but they are just not feminine.

The Soviet embassy was a double-storeyed lodge. The staff called it Little Moscow, and it sat on a block so large that the gardeners kept an orchard. Nikolai Kovaliev, the commercial attachÃ©, arranged a welcome for the newcomers. Evdokia wore her Stockholm dress with the abstract pattern and her smallest black hat. The other wives were drab. Lifanova, the ambassador's wife, wore a thick tan dress with a hole in it. She had a citation pinned to her chest: the civilians' medal for the defence of Moscow. Almost everyone from the city had received this medal. It made her look like a pantomime scout.

The ambassador, Lifanov, was a man of somewhat crumpled physique with an incredible amount of silver in his teeth. From morning to mid-afternoon, Evdokia was to work as his personal secretary and the embassy accountant. She was assigned a heavy and very formal desk in his antechamber. To make it her own, she cut out a picture of a dog playing a piano and put it under the glass.

The Highest Frontier by Joan Slonczewski
Chosen By The Prince by Calyope Adams
Billow by Emma Raveling
Shatter by Dyken, Rachel van
Twisted Metal by Tony Ballantyne
The Cosmopolitans by Nadia Kalman
Rebel with a Cause by Natalie Anderson
Until I Find You by John Irving
The Crossing by Mandy Hager
The Alexandru Chronicles: The Beginning by Julienne Holmes