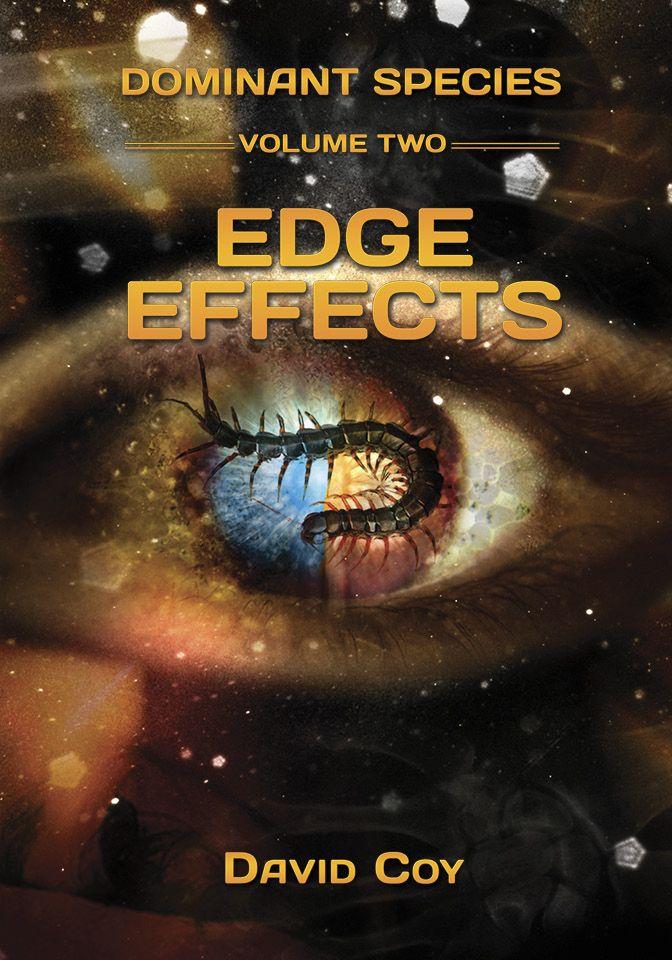 No part of this book may
be reproduced or transmitted in any form or by any means, electronic or
mechanical, including photocopying, recording or by any information storage and
retrieval system, without prior written permission from the publisher or the
author, with the exception of brief quotes used in reviews. Contact the
publisher for information on foreign rights.

For more information on
this title, characters, and forthcoming books in this series,
www.DominantSpeciesOnline.com
.

This is a work of
fiction. Names, characters, places, and incidents are either the product of the
author’s imagination or are used fictitiously. Any resemblance to actual
persons, living or dead is entirely coincidental.

PRINTED IN THE UNITED
STATES OF AMERICA

Nature does nothing
uselessly.
—Aristotle

The charge went off with a dull thud that sent its pulse through
Howard’s feet. He didn’t quite know how, but he could always tell when the shot
was a good one. It was getting near dusk, and the bugs were fierce. He brushed
a particularly nasty one away from his face netting so he could see. He leaned
over the display and watched as the picture came back.

“What are you getting?” Carla asked over his shoulder.

“Not much. Marginal. Maybe enough.”

“I wouldn’t say that. Some bauxite, lead, even copper ore, I
think. Look at this.”

They watched the display as the shot’s resonance echoed through
the subterranean layers and returned data to the sensors.

“Is that it?” Carla asked, pointing to a spike on the screen.

Howard flashed her a look. “Fire two and five. I want a good
harmonic.”

Carla worked the detonator, and a moment later two more charges
thudded through the ground in quick succession.

“There it is. It’s copper ore all right. One thin vein, about a
hundred and forty meters thick. Low concentration but probably worth the
effort.”

“So long little planet,” she said without a hint of humor. “Maybe.
Mining ain’t a pretty sight when it happens.”

They studied the display a moment longer. Carla absently brushed a
big ugly crawler from the screen.

“That’s a hell of an admission from two geologists,” Howard said
finally.

Carla sucked a big breath through her nose and turned away, taking
in a sweeping look at the jungle just meters outside the little clearing. “Did
you ever see such plant and animal life, Howard? Look at this foliage! Christ,
it would take a thousand years to catalog the plant life alone!”

Howard acted as if he were barely hearing her.

“There’s a bunch of it,” he said absently.

“How long did it take to get like this? A billion years? Ten
billion?”

“And the blooms! Look at those blooms! I bet you couldn’t grow
those anywhere else in the universe.”

“Could be,” he said distractedly.

“They ought to just leave it alone.”

She filled her lungs through her nose.” Smell!” she said,
breathing in.” It’s like a greenhouse filled with orchids! Oh, smell that!”

She was completely taken with the planet’s organic splendor. It
had taken him hours to get her out of the jungle and focused on the business at
hand.

The jungle was remarkable.

It was like the pictures he’d seen of the fabled Amazon basin, but
thicker and higher, and it covered every square meter of the planet that wasn’t
water. They’d flown for hours over the endless rolling sea of dark green,
marveling at its uniformity and richness. They saw no mountains to speak of,
just rolling, green terrain broken only by the irregular band of a shallow sea
that wrapped the globe, or an occasional outcropping forced up from below. Patches
of thick, low clouds drifted at treetop level and supplied a constant source of
fresh rainwater. They watched lightning flash in continual bursts and felt the
boom of thunder through the shuttle’s skin as they passed the storms. The
planet was primordial. It boiled with unparalleled biological richness and
vitality.

The red sun shone its light and heat into that wet greenhouse,
and the result was wild and wondrous growth. They’d been on the planet for less
than twenty-four hours and had seen hundreds of alien insects and plants just
in their immediate vicinity.

“What happens to all this!” Carla exclaimed, her arms out wide.

It was Howard’s turn to suck air. “I don’t know. I don’t know,” he
said, frustrated with her idle, romantic talk.

“You know as well as I do what’ll happen here,” she said.

“I
don’t
know. This one’s pretty far. There’s not that much payload here,
either. It’ll be costly to develop, more so than Fuji. But what do I know?”

“But the payoff will be enormous, right? You as much as said so.
You said copper. The distance and the cost is nothing compared to the copper.”

Howard stuck his head back in the display pretending to study the
data. “It’s not up to us.”

“Howard, how much do they reduce your debt by doing this kind of
work?”

“A little more than you. What’s your point?”

“You get pay downs even if you don’t find the gold, right?”

“What are you driving at?”

“I’m saying they don’t reduce our debt enough to do this kind of
work.”

“I’m saying we could save it, Howard. All we have to do is send up
bogus data from one of those dead balls we surveyed earlier this year, modified
a little—you know—just to make it look real. I can do that.”

“Yes! They’ll go away; they’ll leave it alone! And we’ll still get
our reductions. What does it matter to Richthaus? Nobody would give a shit.
They can find another planet to rape, not this one.”

Carla stared at him for a moment, then turned around and ambled
over to the shuttle, opened the hatch and went inside. “Crazy . . .” Howard
said watching her.

She’d always been a little on the fringe of things; somewhat
disconnected from the mainstream. Some would say a little out of focus. That
trait might have been what attracted him to her in the first place.

They’d met when she was working for her certification. Howard was
her teacher at the time. To receive certification as Grade I Geology was
difficult and demanding; not for the faint of heart or weak of will, and Carla
barely made it. Her head was never quite with the program. She was just as
interested in music as she was in geology—something Howard could never quite
fathom. A-Grade at the time, Howard annotated her file and recommended that she
spend another two years as an apprentice to him as a condition of
certification. Since they were sleeping together by then anyway, it worked out
just fine. She eventually caught on and received her grade. They were married a
year after that.

When he took the contract with Richthaus-Alvarez Mining and
Exploration, he negotiated for a personal assistant. Carla was the logical and
emotional choice. If he were going to travel, he insisted, he wanted his wife
along. They’d been off-world for nearly a decade now. The pay down was good
there was plenty of good work, and he spent every day with the woman he loved.

The shuttle made a less than desirable permanent home, but that
didn’t matter to them. It was mobile in the extreme, and that had its obvious
advantages. With their pay downs going as fast as they were, they’d have a good
retirement in another twenty years, no sweat, and a nice new permanent shelter
would be waiting at the end.

It rained that night in a steady downpour. Lightning flashed in
close intervals, and the thunder, like a giant soft hammer, rumbled against the
shuttle’s stiff hull. The sound of the rain was a distant and gentle hiss.

Howard woke up at the height of the storm. He turned in his bunk,
and noticed that Carla wasn’t in hers. He assumed she was in the toilet and
tried for a few more minutes to get back to sleep; but the thunder wouldn’t let
him. When he rolled again and saw that she still hadn’t returned, he got up to
see where she was.

He went to the side port and looked out, pressing his nose tight
against the thick window.

Illuminated by the staccato brilliance of the lightning, her head
turned up to the sky, her mouth wide open, Carla was standing naked in the
rain, with her arms outstretched. Howard thought at first he was dreaming. He
was aware of the wild streak in her, but this was unusual even for her.

There were biological dangers, seen and unseen, on any unexplored
planet—especially for the first ones in. It was bad enough during the daylight
hours when most of the life forms were visible. The cloak of night shrouded
them in greater mystery. It was unthinkable to be outside—naked—on a night
like this on a planet as biologically ripe as this one.

The pouring rain seemed to have kept the insects down at least. It
was pitch dark between flashes, and her ghostly image vanished completely in
the blackness between them as if it had blinked out of existence entirely.

It was strange. But Carla was strange. Howard watched silently,
until, finally, he smiled a painful little smile. If she wanted to commune with
the primal spirit of this green planet by standing naked in its pouring rain at
night, so be it.

As he watched her run her hands back over her face and hair, the
image transformed from macabre to strangely beautiful. He could almost feel
the peppering rain that splashed off her smooth skin, and the cool rivulets
running down her belly and legs. The tangled pattern of the foliage made a
vivid and baroque background for her pale form.

She turned in a circle, arms outstretched, and spun with abandon
in a brazenly naked pirouette. She was a part of the landscape like some slick,
wet creature of the jungle itself, awash in the nourishing rain, celebrating
its coming.

He was tempted to strip naked and join her.

She must have sensed him watching her because she looked right at
him and waved. She turned around and gyrated her hips at him suggestively.

But as he watched the unearthly image twirl and spin, he couldn’t
quite get the hair on the back of his neck to go down completely.

The Roar of the Crowd by Rich Wallace
Crime Seen by Victoria Laurie
The Interrogation Room by EB Jones
Wheel of Fate by Kate Sedley
The Nose Knows by Holly L. Lewitas
Historias de hombres casados by Marcelo Birmajer
No Pulling Out by Lola Minx, Ivana Cox
Eagle People by Benton, W.R.
Rectify (Return to Us Trilogy #2) by M.K. Gilher
The One and Only by Sophie McKenzie