Dominion (Book 1 of The Dominion Series) 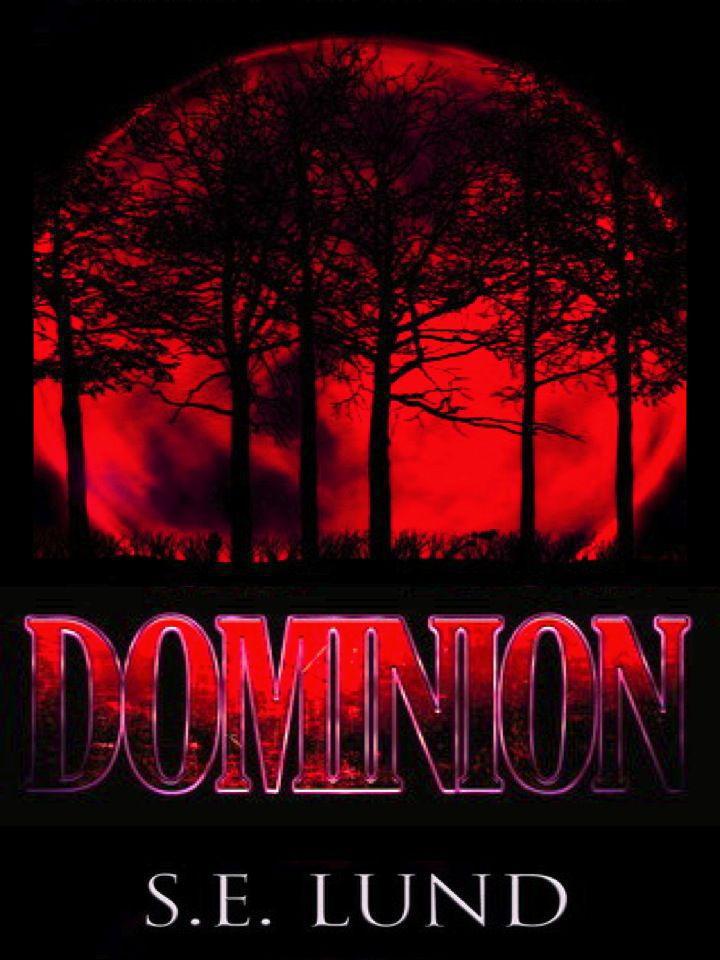 Dedicated to Suzanne whose critical eye and supportive words pushed me to always strive to be a better writer.

Thanks to all the support and encouragement from my family and friends while I was on this journey to published author and for overlooking all the dirty dishes. Many thanks to my editor Michelle and for all my beta readers for their willingness to review this book and help improve it. Your help is greatly appreciated. Any remaining mistakes are mine alone. Finally, thanks to all my Twitter followers and readers for your encouragement. This is for you.

And death shall have no dominion.

Dead mean naked they shall be one.

With the man in the wind and the west moon;

When their bones are picked clean and the clean bones gone,

They shall have stars at elbow and foot;

Though they go mad they shall be sane,

Though they sink through the sea they shall rise again;

Though lovers be lost love shall not;

And death shall have no dominion.

"That it will never come again is what makes life so sweet."

"What hurts you, blesses you. Darkness is your candle."

My mother never lied to me about the existence of monsters. When I'd awaken with nightmares and dreams of shadows that moved in the darkness, she'd stay with me until my terror passed.

"I'm here," she'd say, stroking my hair. "I'm faster than them and I'll protect you. One day, I'll kill the monsters forever."

My great tragedy was that she couldn't protect herself. A decade after her death when I was only eleven, finding her killer and discovering a way to eradicate all vampires is the only thing that keeps me going. Today I take up the work that ended her life.

The late spring evening is rainy and cold so I bring my umbrella and stand at the bus stop outside my building. A professor of linguistics offered to translate an ancient illuminated manuscript I found in my mother's files. My mother started to translate it but never finished, dying the week she received it. The murder was never solved and I need to know if the manuscript had anything to do with her death.

The evening bus isn't crowded because classes and finals are over. I take out my mother's notebook and read it over once more for her notes from the week before her death describe the document that I have tucked in a large manila envelope in my backpack.

Included in the file is a card with a handwritten note to my mother, the script bold, masculine.

I've enclosed this manuscript as promised. It documents my making and that of my twin brother, Michel. I hope it provides you with insight into our existence at a time when life was very different than it is today.

My mother
knew
this vampire?

That shocks me. She was a vampire hunter, dedicated to killing them off. As a geneticist working for the Council of Clairveaux, she studied genetic diseases, searching for the cause of vampirism – ostensibly so she could find a cure, but I know it was really so she could find a magic bullet and destroy them all. Her files describe the Council – a joint Human-Vampire group appointed by the ruling families involved in its creation. Dedicated to ensuring that the fragile peace between the two species remains in place, the Council ensures that both vampires and humans follow the terms of the Treaty of Clairveaux, signed almost seven centuries earlier.

From what I can gather, the Treaty was created in order to stop the bloodshed between the two species that had been a constant state since, well. Forever. The Inquisition and the Church's concerted effort to hunt down and kill all vampires under the claim it was after 'witches' and 'warlocks' sparked a desire on the part of vampires to find a compromise. Humans were gaining ground on vampires, beginning to beat them, developing new weapons, and vampires felt under threat. The Treaty was a compromise between extinction of vampires or enslavement of humans. Vampires
could
continue to exist, but they could no longer kill humans for their blood unless under very specific circumstances. Humans couldn't hunt and kill vampires unless they broke the terms of the Treaty. And above all, like Fight Club, those who knew the truth about vampires and the existence of the secret Treaty of Clairveaux were not allowed to speak of it upon pain of death.

This fragile peace persisted for almost seven hundred years until genetic technology evolved far enough so that it became possible to eradicate all vampires once and for all. Faced with the growing threat to their species, some vampires decided on their own path to ascension - Dominion. Vampire rule.

So, while vampires are still firmly in the closet, some of them don't want to stay there and I think that's why my mother died. The vampire who wrote the manuscript, Sir Julien de Cernay, gave the manuscript to her for a reason and I'm hoping if I can translate it, I'll learn why.

She managed to translate the first paragraph, but then stopped, and it's tantalizing.

"A full moon rises"
her handwritten translation starts,
"stained red from fires in the village square where five heretics burned at the stake. The Crusades broke my family, estranged me from my brother and now killed me. I died, not on the battlefield as befitting a knight protecting my father's estate, but in a bed in an abandoned castle at the hands of an ancient vampire who bewitched me… "

I can't imagine what it must be like to live eight centuries and despite my hatred of vampires, there's a part of me that wants to meet the writer, Sir Julien, just to see what he's like.

The bus drops me off and I enter the linguistics building's unusually empty corridors, the sound of my boots echoing off the walls. I take the stairs to the third floor, shaking the late spring rain off my umbrella. A tag on room 304 reads
Steve Cormier, PhD
. I knock and hear papers shuffling inside. The door opens and I'm face to face with perhaps the most beautiful man I've ever seen and for a moment, I'm filled with dread.

Is he a vampire? His skin is so
pale
.

He smiles, holding a mug of coffee in his hands as if to warm them. I stand open mouthed, debating whether to run. I've only seen one vampire before that I know of – the one who killed my mother – but he's just a vague memory of a bloody mouth and white skin. I was only eleven, and I don't even know what he really looked like due to shock, my memory lost into some kind of psychological black hole. I was there when she was murdered, but I have no memory of him or the events. My psychiatrist says I have PTSD-induced amnesia and that one day I will remember. All I know is that I found her lying on the floor, her neck ripped open, blood foaming at her mouth.

That image I can't escape, no matter how I try.

If Professor Cormier
is
a vampire, he doesn't look like the un-dead of my imagination. Whatever he is, he's wearing an ornate gold crucifix around his neck and now I wish I'd read more of my mother's research. Do vampires
really
hate religious symbols like crucifixes and holy water?

His skin doesn't look like a corpse, but like he's ill, his skin white like some 17
th
century nobleman with a powdered face. Actually, it's beautiful in a strange way — the way I imagine Keats would have looked before his tragic death.

He's younger than I expected. Thirty five at most.

"Are you Professor Cormier?"

"Eve?" he says, extending his hand. I look down at it briefly, reluctant to shake but I don't want to be rude. His touch is a little on the cold side, but not corpselike — not like dead chicken as I imagine a vampire's hand would feel. He holds mine and doesn't let go even after we finish shaking. It's far too forward, and my heart does a little flip-flop because he's so beautiful I can barely stand to look at his face. I feel incredible guilt that I find him so attractive – if he's a vampire, he's my mortal enemy.

Finally, when my cheeks are hot with embarrassment, he releases my hand.

"Hello. Nice to finally meet you."

Finally
? I just exchanged texts with him about this meeting an hour ago…

He has this very soft accent somewhere between continental and Cajun French. He's smiling, one side of his mouth turning up just a bit and I can't tell if it's a smirk or if that's just the way he smiles.

"Hello." I smile back to be polite and hold up the envelope. "I have the manuscript for you to translate."

"Please, come in." He opens the door wider and waves into the interior.

"Thank you." I force another big smile, trying to look like I'm pleased to be here, when what I really want is to turn on my heel and run away.

I have to squeeze past him sideways for he's standing in the doorway and when I walk by I catch a scent of something masculine, and not like the usual cheap cologne I smell on the guys at the university. More like sandalwood or incense. He smells good and not like he's fresh out of the grave the way I imagine a vampire would smell, all earthy and wormy and old blood.

I kick myself mentally. He's probably just got that really pale skin you see with some Europeans but given the profession I intend to follow, I'm suspicious of everything.

Inside, it's a typical Boston U junior faculty office – bookshelves on either wall, and a desk in front of a large window looking out over the rotunda. A black leather sofa and chair with a coffee table sit to one side of the office. On the coffee table and on every surface sit piles of research papers and books. There's a chalkboard with words translated from one French dialect to another and into English.

I turn around and he's staring at me, his gaze extremely intense, his blue eyes huge, pupils dilated.

"Please, let me take your coat."

I remove it and hand it to him and he hangs it on a coat tree by the door.

"Have a seat," he says after a pause, motioning to the sofa. "Can I get you anything to drink? It's a damn cold night. There's fresh coffee in the pot."

I take a seat and he's staring at me with the strangest expression on his face – half amused and half perplexed. He's so attractive, I don't want to stare at him for fear I blush, which I have a bad tendency to do when I'm nervous. But of course I can't help but check him out from the corner of my eye. He's wearing black jeans with a thick black belt and a white button-down shirt. The contrast between his black hair and white skin highlights his blue eyes.

His hair is longish and a bit wild, just below his chin and tucked behind his ears, and his blue eyes are rimmed by thick black lashes. I have to look away from his intense gaze, and lift up the envelope containing the manuscript and clear my throat, unsure if I can actually speak without my voice cracking.