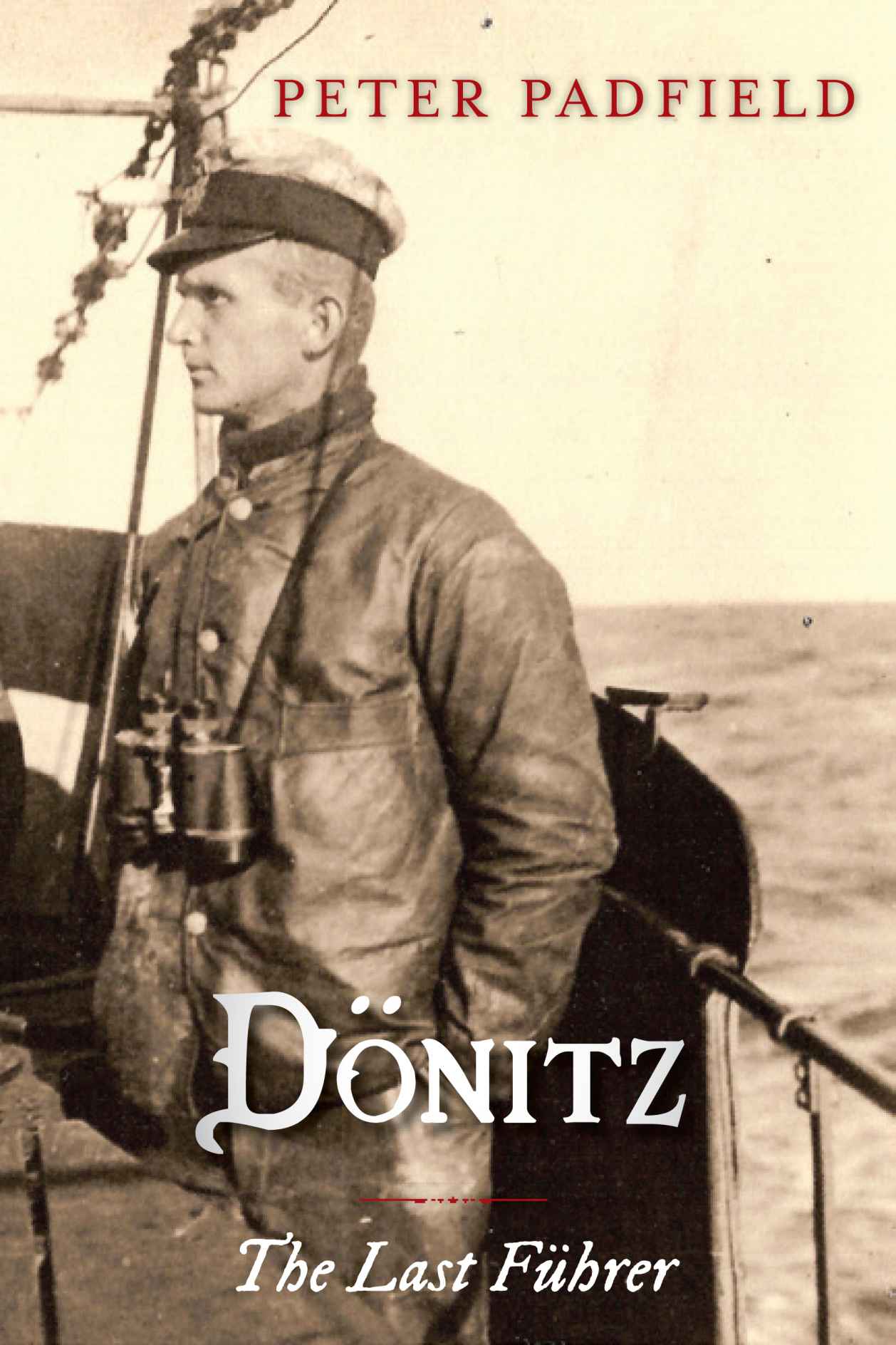 Peter Padfield is an established biographer and naval historian. His interest in German history stemmed from a book he wrote on the Anglo-German naval rivalry prior to the First World War,
The Great Naval Race
. Since then he has written three major biographies of leaders of the Third Reich – Hess, Himmler, and this book on Grand Admiral Karl Dönitz.

3   Towards the Second World War

5   The Battle of the Atlantic

‘A senior officer who sees his responsibilities and duties in times such as these only within the limited terms of his military duties, without being aware of his grave responsibility towards the whole nation, lacks greatness and a proper understanding of his duty.’

‘
Each soldier has to fulfil the tasks of his position regardless. So our calling and our fate is to fight fanatically, and bound up with it is the task for each of us to stand fanatically behind the National-Socialist State.
’

1
Karl Dönitz as a youth
(Frau B. Fidelak)

2c
Karl Dönitz as a cadet
(Frau U. Hessler)

3b
The German officers of the
Midilli (Frau U. Hessler)

5a
The English Admiral commanding at Trincomalee, Ceylon, is greeted by Dönitz
(Frau U. Hessler)

8b
Dönitz congratulating a Commander on his Knight’s Cross
(Ullstein)

9b
Dönitz relaxing with ‘Wolf’
(Frau B. Fidelak)

9c
A walk in the country around ‘Koralle’
(Frau B. Fidelak)

13a
Dönitz is informed that his government is dissolved
(Süddeutscher Verlag)

14a
In the dock at Nuremberg
(Süddeutscher Verlag)

16b
‘Old Comrades’ at Dönitz’s funeral in Aumühle, January 1981
(Keystone)

First, I should like to thank David Burnett of Gollancz for encouragement and enthusiasm, so greatly needed over a long haul such as this has been, and Anne Harrel, whose original idea this biography was. I should also like to thank the Manager of my branch of the National Westminster Bank—who kept his nerve.

My great thanks are due to Karl Dönitz’s daughter, Frau Ursula Hessler, for her hospitality and ready answers, and to his niece, Frau Brigitte Fidelak, for her very many letters in answer to my queries, and help with pictures. I know both will be hurt by this book, and I am sorry.

I should like to record my thanks to the late
Konteradmiral
Edward Wegener for much background help and instructive conversation, to Herr Klaus Querling for his tact and initiative in interviewing, to the Daegel family for hospitality, particularly Christian Daegel for his continuing help in finding books and articles; also to Frau Margarete von Lamezan for searching her memory, Professor D. Helmut Gollwitzer, Pastor of Dahlem, and Frau Röhricht, and to Heinrich Jaenecke, who searched his memory and allowed me to quote from his
Stern
article, also to
Admiral ad
Friedrich Ruge, and the late Albert Speer.

While still in Germany I should like to record my great debt to Frank Lynder for his specialist insights into aspects of the Third Reich and the U-boat war and his generosity in making them so readily available, also for his hospitality. From France I should like to thank Maître Denis Jacques for his interesting tour of the château and bunker at Kerneval.

In this country I should like to thank Professor Paul Kennedy of the University of East Anglia and Douglas Botting, both of whom pointed me in the right direction when I started what seemed a daunting task. I owe a great debt of gratitude to Robert M. Coppock of the Ministry of Defence for enormous, creative help with the German naval archive, help with German naval
terminology, reading illegible German script and much information besides from his vast knowledge of U-boat affairs, also to Alan Francis of the Naval Library, and Philip Reed of the Imperial War Museum for his creative help. And I am grateful to Patrick Beesley, author of, among other excellent books,
Very Special Intelligence
, Tony Broughton, producer of
The U-boat War
for the BBC, Ludovic Kennedy, who presented it and described his interviews with Dönitz in
The Spectator
, and Jonathan Steinberg, all of whom assisted with recollections. I should like too, to thank Professor Volker Berghahn of the University of Warwick, both for background help from his own works and finding unobtainable books from the National Archives, Washington, and Edwin R. Coffee for detailed examination of the records, and advice.

Mary Paine was most enthusiastic and successful at finding illustrations, and Hugh Young, Helga Cook and Guy Padfield helped ease the burden of translation, for which I am grateful.

Finally I should like to acknowledge my great debt to two German historians who charted the ground over which this biography moves, and published so many hitherto unknown documents: Dr Jost Dülffer for
Weimar, Hitler und die Marine
, and Professor Michael Salewski for
Die Seekriegsleitung, 1939–1945
.

If there is anyone I have omitted by oversight, I apologize.

Truth is elusive enough at the best of times. To hunt it across a cultural divide such as that between Great Britain and Germany in the first half of the twentieth century presents problems. Race is not one of them: racial characteristics, such as they are—and goodness knows there has been enough seafaring and migration, expulsion and conquest to have mixed up the genes somewhat—are, on the surface, entertaining, even important, in the sense that style and manners are important, but otherwise about as relevant to a man’s thoughts and acts as the colour of his eyes. Perceptions of racial differences are another matter; such perceptions played a large part in the later stages of the British Empire, an even larger part in the Third Reich—it was all in the mind.

The real differences between peoples, surely, are caused by the systems under which they live and the habits of mind engendered by the systems—give or take handfuls of dissidents. In that sense there is a chasm fixed by history, geography and beliefs between those brought up in the liberal tradition of the free west, and those from State-centred systems such as Germany’s at the time of this story. The western system, arising from the needs of merchants—Bonaparte was right in a more profound sense than probably he realized when he called the British a nation of shopkeepers—sets high values on freedom, without which merchants cannot function properly, contract, which is the essence of trade, and the separation or balancing of power—for once power is concentrated freedom is lost. The Prusso-German system, on the other hand, arose from the needs of soldiers—since Prussia was a continental state without natural frontiers and surrounded by enemies—and placed high values on force and the threat of force, guile and deception, and the concentration of State power to maximize force for internal as well as external purposes. These opposing compulsions pervaded all areas of thought within the two systems, from philosophy and the writing and teaching of history to the popular press and even the pulpit, moulding
minds in fundamentally different ways and making it hard for those from either system really to understand their fellows from the other. Tudor and Stuart Englishmen would have understood the group around the Kaiser without much trouble; Asquith’s Liberals found it difficult—some never did make the necessary leap—while most Americans were far enough away from the troubled continent—or thought they were—not to have to try too hard. Much the same happened in the 1930s.

The problem of understanding remains; it will always remain so long as there are traders on the one hand and soldiers on the other—and philosophers and historians and politicians who have not grasped the difference. Marxist-Leninists now, Pan-Germans and National-Socialists (Nazis) then, Bonapartists before that… the different labels disguise the same product with the same compulsions—just as our labels cunningly conceal ours. We, the west, are the heirs to trade; our freedoms stem from the freedom to trade as their repressions stem from the need to coerce. Merchant power is as corrupt as martial power, but at least we know it and safeguards are enshrined in our constitutions; ‘their’ constitutions enshrine power, hence corruption—and in the end defeat and destruction.

This is a story of corruption, the corruption of a great nation and its savage destruction. It is at the same time the tragedy of a man with certain qualities born into that great nation and that system of power at one of its climactic periods. That he was a German and I an Englishman is beside the point; that I was born into the traders’ system, he into the State-centred power system—surely that is the point! There, but for the grace of God …

A Plague of Secrets by Lescroart, John
Promises by Jo Barrett
Gregory Curtis by Disarmed: The Story of the Venus De Milo
These Dreams of You by Steve Erickson
How to Look for a Lost Dog by Ann M Martin
Nonconformity by Nelson Algren
Shooting for the Stars by R. G. Belsky
The Arrangement, Vol. 20: The Ferro Family by H. M. Ward
Mercy Me by Margaret A. Graham
A Special Surprise by Chloe Ryder