Read Don't Talk to Me About the War Online

Don't Talk to Me About the War 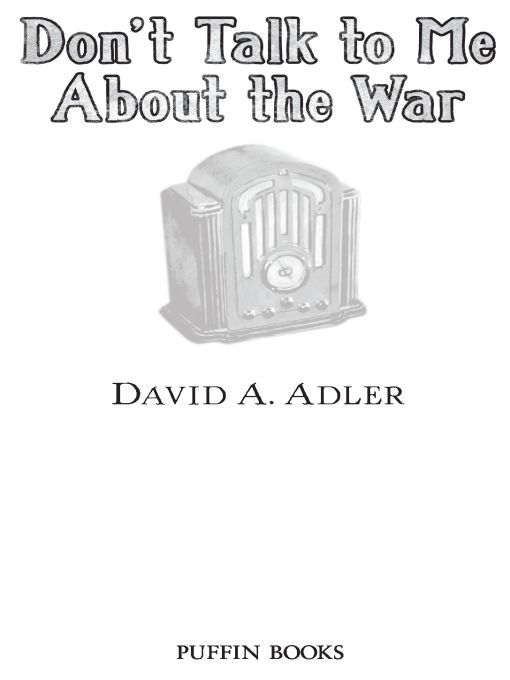 Table of Contents
Title Page
Copyright Page
Dedication
Chapter 1 - Don’t Talk to Me
Chapter 2 - I Might Call Myself O. Tommy
Chapter 3 - I’m Worried About Mom
Chapter 4 - Look for a Bottle
Chapter 5 - Helen Trent and Ma Perkins
Chapter 6 - The Great Roger Burns
Chapter 7 - I Count My Blessings
Chapter 8 - Doctor’s Appointment
Chapter 9 - One Big Nasty Circle
Chapter 10 - Half Blind!
Chapter 11 - Another Doctor
Chapter 12 - All I Think About Is Mom
Chapter 13 - Aren’t They Going to Tell Me?
Chapter 14 - Sarah’s Uncle
Chapter 15 - Thank God for the Navy
Chapter 16 - “We Shall Never Surrender!”
Chapter 17 - A Terrible Thump
Chapter 18 - And I Like You
Chapter 19 - It Can’t Be!
Epilogue
Faraway troubles and close-to-home worries
I ask, “Why are you so interested in the war? You don’t know anyone over there.”
We’re in front of the bakery. Beth stops and asks, “And why are you so interested in baseball? You don’t know any of the players.”
Beth’s eyebrows are raised. She’s waiting for me to answer, but I don’t know what to say.
She turns and walks toward Goldman’s. She takes each of the different afternoon newspapers from the bench and goes in.
I just stand there.
Maybe Beth is right, I think. Maybe baseball is not important, but then I think, if the Dodgers win today, they’ll be tied for first place, and I do know the players. There’s Van Lingle Mungo, Fat Freddy Fitzsimmons, Cookie Lavagetto, Dixie Walker, Dolph Camilli, and Pee Wee Reese. I know them all. 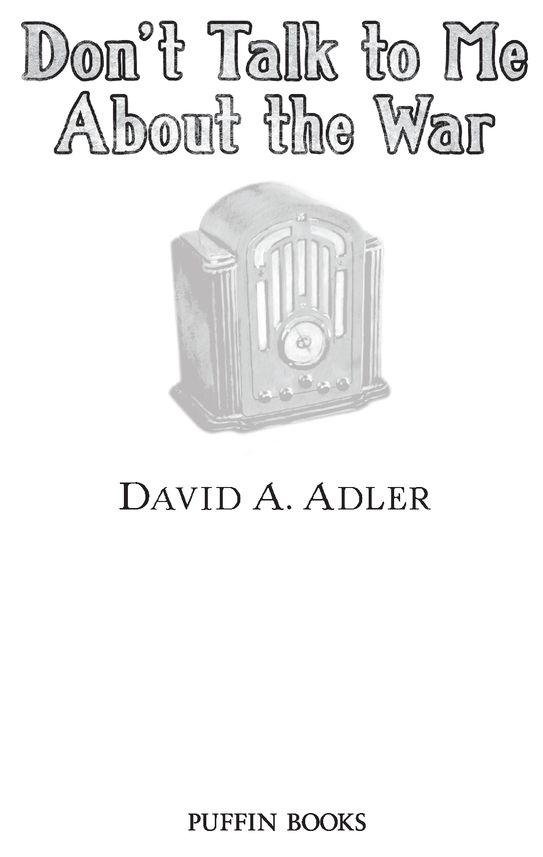 FOR MY FAMILY
THANK YOU, Dr. Joseph Straus and Margaret O’Keefe, for talking to me about your mothers’ illnesses and treatment; Dr. Joseph C. Yellin, a neurologist, for consulting with me on Mrs. Duncan’s medical issues and sharing with me your collection of 1940s medical texts; Amy Berkower and Jodi Reamer, my agents, for your enthusiasm and continued encouragement; and Anne Rivers Gunton, my editor, for your patience, sage suggestions, and constant good cheer.—D.A.A.

1
Don’t Talk to Me
D
on’t talk to me about the war. It’s across the ocean, and I haven’t even been to Long Island and that’s just over the bridge. What I mean is, the war’s so far away and we’re not even in it. And anyway, it’s all Beth talks about, so if there’s any war stuff I should know, she’ll tell me.
Beth and I meet at Goldman’s, a coffee shop that’s just three blocks from my building. She goes there for breakfast and the newspapers she loves to read. We meet and we walk together to school.
This morning Mom is standing by the window of our apartment. “Tommy,” she says, “wear your jacket. It’s chilly.”
Mom is holding on to the windowsill. She’s a small, pretty woman with brown hair and blue eyes. I look at her hands. They’re steady, not like last night. I say good-bye to her, take my jacket, go down two flights of stairs and out.
Mom was right. It’s chilly for the end of May. The sidewalk is crowded with people on their way to school and work, and most everyone is wearing a sweater or jacket.
I stop outside the coffee shop and look in. There’s Beth at her regular corner table surrounded by open newspapers. Sitting with her is Mr. Simmons, an old man with a gray felt hat tilted back on his head.
“Hey, Tommy. Did you see this? ” Beth asks when I get to her table. She points to a headline: ALLIES TRAPPED! NAZIS AT CHANNEL!
She knows I haven’t seen it. We don’t get a paper at home. I tell her, “I see it now.”
The Allies are the good guys—the English, French, Belgians, and some others. Beth is always worried about them. She thinks the people they’re fighting, the German Nazis, are evil.
I turn the paper to the back. BROOKLYN BEATS CUBS, 4-3!
“Look,” I say. “The Dodgers won.”
I already know about the game. Last night I listened to Stan Lomax and his sports report. Van Lingle Mungo, my favorite Dodger—I just love his name—pitched five scoreless innings. Dolph Camilli got the winning hit, a single in the ninth.
Beth turns the paper to the front page and gives me that
Don’t be such a child
look. We’re both in the seventh grade, but Beth is fourteen, almost a full year older than me.
“Do you know what this means?”
She’s talking about the war. Mostly I don’t understand what’s going on in Europe, beyond that they’re fighting.
“Sure,” I tell her. “It means the Dodgers are just one game out of first. Nineteen forty might be our year.”
“The Allies are trapped by the English Channel,” she says. “The Germans are headed to Paris and it looks like they’ll invade England.”
“They’re out to conquer all of Europe,” Mr. Simmons says. He lifts the coffee cup off the paper he’s reading,
The New York Times,
turns to an inside page, and tells Beth, “It says here, there may be as many as one million men trapped.”
Beth leans over and looks at the article.
Before she moved here, Beth lived in Buffalo. That’s upstate New York, right near Niagara Falls and the Canadian border. “It gets real cold there,” Beth told me. “In the winter, when Mom was sick, we couldn’t leave the house, so every morning we read the newspaper. That was her way of getting out. And she was always real interested in what was going on in the world.”
ADS
15.4Mb size Format: txt, pdf, ePub

The Lonely Whelk by Ariele Sieling
Viking Wrath by Griff Hosker
Miss Peterson & The Colonel by Fenella J Miller
Ghosts and Lightning by Trevor Byrne
After by Sue Lawson
Beyond the Darkness by Alexandra Ivy
Asanni by J. F. Kaufmann
Enemy Mine by Karin Harlow
Call & Response by J. J. Salkeld
The Assassin's List by Scott Matthews