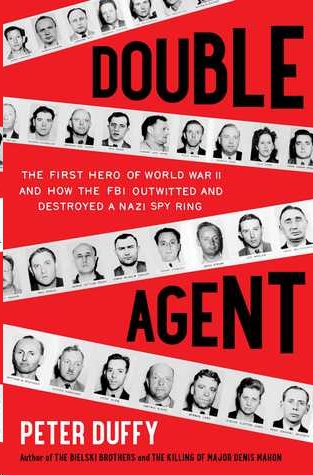 Join our mailing list and get updates on new releases, deals, bonus content and other great books from Scribner and Simon & Schuster.
C
LICK
H
ERE
T
O
S
IGN
U
P
or visit us online to sign up at

Prologue
1. The Object of the Bombardment
2. The Highest Humanity
3. Almost Single-Handed
4. True Faith and Allegiance
5. With the Resources We Have on Hand
6. To Lead an Organization There
7. In This Solemn Hour
8. “You Are Harry Sawyer”
9. A Vile Race of Quislings
10. And You Be Careful
11. Room 627
12. The Trusted Man
Epilogue
Photographs
Acknowledgments
About the Author
About Peter Duffy
Notes
Photo Credits
Index
To Laura
PROLOGUE

It is only a question of moral steadfastness and boldness of spirit, imagination, and determination if we are to achieve the development of the air force into a weapon which will command the air.
—Lieutenant General Walter Wever, chief of staff of the Luftwaffe, November 1, 1935
D
uring the early years of Adolf Hitler’s dictatorship, the Nazi state had few greater priorities than its crash program of aerial rearmament that sought to build as many planes as the revived German aviation industry could churn out. The Führer wanted to throw a shield over the country so a more general war-preparation campaign could be completed, part of his goal to keep his enemies at bay as he prepared to lead a battle “not for an adjustment of boundaries” but to secure “so much land and ground that the future receives back many times the blood shed,” as he said in 1928. Even though only about eight hundred aircraft were operationally ready for duty when the air force’s existence was announced to the world in March 1935, a blatant violation of the terms of the Treaty of Versailles banning all but a nominal military force, Hitler boasted to visiting British officials that his Luftwaffe was already the equal of the Royal Air Force. His bluff played upon now-prevalent fears about the devastation that aerial bombardment would wreak in the modern era. Since “no power on earth” could protect the “man on the street” from “being bombed, whatever people may tell him,” as former (and future) British prime minister Stanley Baldwin said in the House of Commons in 1932, the nation with both the ability and inclination to launch an all-out assault from the skies was one to be reckoned with on the world’s stage. “The bomber will always get through,” Baldwin warned, a comment that encapsulated the thinking of the era.
The emergent symbol of Nazi might went to war for the first time in July 1936, giving Air Marshal Hermann Göring “an opportunity to try out my young air force,” as he said at the Nuremberg trials. The Nazi air fleet joined the Spanish Civil War on the side of the Nationalists led by General Francisco Franco in their violent uprising against the democratically elected Republican (or Loyalist) government that included Communists in its coalition of left-wing parties, a consequence of Moscow’s decision to instruct its adherents throughout the world to participate in united or popular fronts with “fellow travelers” against the Fascist common enemy. From late July until October, the Germans played a central role in airlifting twenty thousand Nationalist soldiers from Spanish Morocco to the Spanish mainland, providing a lifeline to the struggling Fascist forces during the early months of the war. By September, the Luftwaffe was conducting its first low-level attacks in support of Nationalist troops and finding middling success in the Madrid region, where the Republican government was relying on the assistance of
its
most formidable foreign ally, the Soviet Union, which had sent enough aircraft and pilots to gain air superiority over the capital. During these days Nationalist general Emilio Mola announced that four columns would attack Madrid, but the initial blow would be struck by a “fifth column” within, “men now in hiding who will rise and support us the moment we march,” a boast that guaranteed a vicious Republican campaign against those who were suspected to be “spies, scare-mongers, defeatists—those who, concealed in their hiding places, are awaiting the order to rush out into the streets . . . the
quinta columna facciosa
.” Over one month in late 1936, some two thousand Nationalist-supporting prisoners, including military officers, Catholic clergy, and white-collar professionals, were loaded onto buses, transported to the villages of Paracuellos del Jarama and Torrejón de Ardoz on Madrid’s outskirts, and executed by Communists and their Anarchist auxiliaries, likely at the instigation of Soviet advisers, who were well practiced in the art of liquidating state enemies.

Stand-Off by Andrew Smith
Morgan the Rogue by Lynn Granville
On My Honor by Marion Dane Bauer
The Last Horror Novel in the History of the World by Carr, Brian Allen
The Unveiling (Work of Art #2) by Ruth Clampett
The Man Who Was Left Behind by Rachel Ingalls
Scarleton Series I : Before the Cult by Sandy Masia
Bartered by Pamela Ann
Lisa Jackson's Bentz & Montoya Bundle: Hot Blooded, Cold Blooded, Shiver, Absolute Fear, Lost Souls, Malice, & an Exclusive Extended Excerpt From Devious by Jackson, Lisa
Ramage's Diamond by Dudley Pope