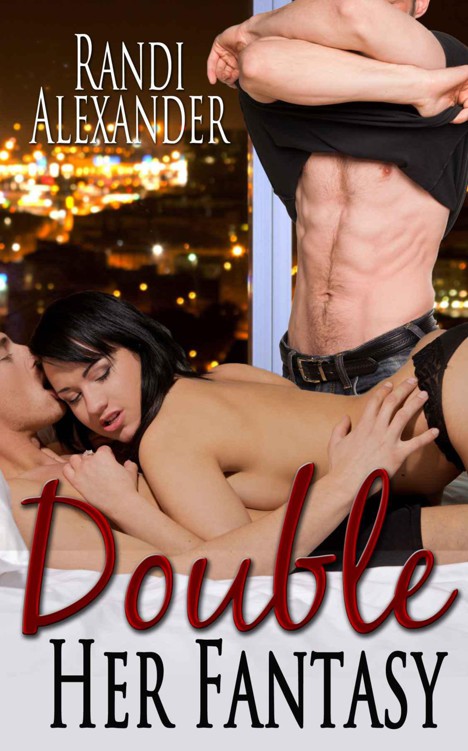 Thank you for purchasing this Wild Rose Press, Inc. publication.

“
Her books are hot and sexy but also have wonderful characters, excellent writing, and riveting stories!”

“This was my first book by Ms. Alexander but it certainly won’t be the last. Her story moves quickly and flows smoothly from start to finish with almost no lag time.”

~Honeysuckle at Long and Short Reviews

“This is a perfect story for laying around on a lazy afternoon. Of course, you may not feel quite so lazy after reading it.”

“Once again Randi Alexander has written a hot cowboy story that will keep any girl warm at night.”

TURN UP THE HEAT

“Randi Alexander has given us an emotionally charged story. The connection and the sex between Mackenzie and Gina is hot.”

Megan Shore left her suite on the 37th floor of the Chicago hotel as a curiously familiar man stepped onto the elevator. A baseball cap was stuck in the back pocket of his jeans, and a tattoo peeked out from under the sleeve of his dark shirt.

“Hold the elevator, please.” She fast-stepped toward it as quickly as her spike-heeled red pumps allowed. Running late, as usual. Her workshop at the convention would start in five minutes. Barely enough time to get to where she needed to be.

The man heaved a loud breath as he stepped back against the glass wall of the elevator.

Megan took a spot closer to the front, not as brave about the dizzying height as he evidently was. She noticed the mezzanine button was already pressed. Was that how she knew him? Was he a graphic artist, too? Under the guise of brushing something off the pant leg of her white suit, she risked a glance at him.

His gaze met hers. Those trademark blue eyes. Wavy, sandy brown hair a little long. Tall, really tall. Big across the shoulders, a tat of a lizard on his bicep…She sucked in a breath.
Unbelievable
. She’d seen that tattoo—and the man behind it—on the entertainment channel a month ago. Garret McGatlin. Action movie star.

A wild chill tingled through her. She smiled. “Thank you.”

He nodded, pulled his phone from the back pocket of his tight jeans, and started texting.

Glancing down, she noticed his heavy work boots, almost a military look. Was that his normal style, or did he have an action scene to film?

She looked out the moving wall of glass. She’d had a minor crush on him for three years, since she’d seen him in
Killing’s Not a Stranger.

She didn’t blame him. She valued her privacy three hundred and sixty three days a year, then, for two intense days of the Comic Artists and Readers Convention, she became a very public star in her own universe. A different person than the reclusive artist she’d let herself become.

Hell, forget his privacy. How many chances would she get to talk to Garret McGatlin?

Sucking in a deep breath, she turned toward him. “Are you filming in Chicago?”

It took him a few seconds to drag his gaze from his phone. “Yes.”

Those eyes.
Mmm.
Terribly wicked. His nose a bit crooked from doing his own stunts. Lips pressed a little tight, possibly unhappy with being pestered by a fangirl. Strong jaw, freshly shaved. The smooth line of his throat eased down to the V of his black button-down shirt where a light sprinkling of hair showed.

She could play there, nuzzle her lips, tickle and tweak for hours. Oh, crap, was she gawking? Her gaze shot to his.

One perfect light-brown eyebrow arched up and a half-smile curved his lips. His eyes shifted, looking beyond her. The smile faded.

“Damn it.” He shoved his phone into his pocket, plucked a pair of aviator sunglasses with nearly black lenses from the back collar of his shirt, and slid them on. “How the hell do they always find me?” He pulled out the baseball cap and tugged it low on his head.

“Who?” She turned, looking out the side of the elevator into the three-story atrium of the mezzanine level. A hoard of people milled around the area where the elevator doors would open. Her people. The CARC attendees who would be her audience at the one-hour workshop she’d be giving on drawing interesting characters. The VIPs who would attend the meet and greet. The comic book fans who came to see her every year and waited in line for hours to talk to her at her signing table.

Her fans. And maybe a stalker? Her belly twisted. Taking a deep breath, she forced the fear back into its closet. She’d matured since college. Her hair was no longer spiky and red, but long, and back to its natural black. She’d changed her name, changed her city, changed her life. He. Couldn’t. Find. Her. The panic eased.

Back in control, she glanced at the man beside her.

The suave star was gone, replaced by a man disguised and twitchy. She almost felt sorry for him, but a naughty bubble of excitement built inside her. What would be his reaction when no one noticed him, and instead swarmed
her?

“Them.” He gestured toward the crowd. “The lobby’s full of them so we figured this level would be safe. They’re like parasites.”

She fought down the urge to roll her eyes. He chose to live the life of a movie star. What did he expect? She tipped her head and made a sad-puppy face. “It must be so difficult.”

He froze for a moment. Through those black lenses, she could imagine him staring at her, wondering at her overly solicitous tone.

The elevator slowed, crawling toward the convention level.

“Let me help you.” She leaned a bit closer to him and opened her eyes wide. “I’ll distract them while you sneak around the edge of the crowd and make your getaway.”

His lips tightened even further.

She slung the straps of her red purse onto her shoulder, flicked her hair over the other shoulder, and dramatically undid the top button on her wildly patterned blouse. “Ready?”

“What?” His voice held a skeptical laugh.

She’d pay a hundred dollars to see the expression in his eyes. Grinning, she stepped in front of the elevator doors as they opened. She whispered her mantra. “He. Can’t. Find. Me.”

A cheer went up, and a half dozen people shouted, “Megan!”

She smiled and let herself relax.

Garret’s jaw dropped open as he watched her step into the crowd and become surrounded. “Who the hell are you, lady?” he mumbled.

He’d noticed her staring at him in the elevator. Could tell by her tone of voice that she was interested in him. Knew by the way she’d stared at his body, she’d like to get to know him.

Damn, he’d like to know her a lot better, too. Tall and beautiful, that long, silky hair, her smooth chocolate voice, and dark green eyes. When she’d unbuttoned her blouse, he’d caught a glimpse of the tops of nicely rounded breasts, and as she’d walked away, her fine ass swayed, tempting him.

As the elevator doors began to close, he reached out and pushed against one side and they slid open. He stepped out and lurked against the wall, knowing he should make his escape, but wanting to watch her for just another minute.

She greeted her fans as they jockeyed for a spot closer to her. They remained respectful and calm, unlike his fans who were intent on touching him, wanting to come away with a memento, like his shirt or a chunk of his hair.

A quick laugh escaped him. Her strange behavior in the elevator made sense now. She’d known they were her fans, not his, and she’d taken the opportunity to give him shit, knock his cocky ass down a few rungs.

A few of her fans eyed him, now. He glanced around the room and spotted his brother, Trey, then got moving toward the exit.

“Megan,” he whispered. The name tasted good on his tongue. He’d like to taste more of her.

From across the mezzanine lobby, Trey McGatlin stared at the dark-haired goddess who’d stepped out of the elevator. Tall and trim in her white pantsuit, she walked like she was floating. Her long hair swung as she turned, and vivid colors flashed from under her suit coat. Her smile shot a solar flare through the room, which ricocheted to hit him deep in his gut.

“Hello sugar,” he murmured. With his index finger, he tipped his cowboy hat back on his head and took a step forward. Somehow drawn to her, his body led him like a compass toward north. Who was she? He had to find out.

The crowd surrounded her, definitely her fans. Instead of running from them like his brother, Garret, did from his fans, she talked to them, even tipped her head and listened to them. A second later, he recognized his brother in disguise as he stepped out of the elevator.

Garret stood to the side, staring at the woman. Was he feeling the pull, too? After a minute, his brother skirted the crowd, keeping his head down.

Moving to intercept him, Trey caught his eye and gestured toward the west entrance.

Halfway there, they met up. Garret hitched a thumb over his shoulder. “What the hell is going on here?”

Trey looked around at the people dressed as super heroes, the cardboard cutouts of comic book characters lining the walls. “Take a guess, little brother.” He laughed. “I’ll give you a hint. It ain’t a rodeo.”

Garret cussed under his breath.

His brother had to be a little freaked out that
no one
recognized him. He was well-grounded, mostly, but he enjoyed his fame.

“Did you see that woman who got off the elevator before me?”

They pushed out the exit doors and walked to where the limo waited. “The sexy sweetheart in the white suit? Oh, yeah. Couldn’t miss her.”

Garret stopped and took off his glasses as the driver opened the back door. “Goddamn. Up close? She’s amazing. Dark green eyes.”

“Yeah?” Trey folded himself into the limo first. “Even from across the room, I could tell she’s somethin’ special.”

His brother flopped down next to him and grabbed a bottle of water from the ice bucket. “She is, but…” He puffed out a long breath. “I acted like a jerk. I’m pretty sure she thinks I’m an idiot.”

“You are, baby brother. No question there.” Trey smiled as he set his hat on the other seat.

“Fuck off.” His voice didn’t carry much heat. “Wonder who she is.”

“Heels. But she had to be nearly six feet without them. She was…” He leveled his hand across the top of his nose. “About five-ten, five-eleven.”

“Yeah. Real nice.” His brother adjusted the front of his jeans and Trey felt his own pants tighten a bit.

Trey pulled out his phone and accessed the internet. “She’s part of the convention. They called her Megan.”

“Heard that. Might not be her real name, though.” Garret slumped lower in the seat and dropped his head back. “She’s got attitude. Spunk. She’d be a lot of fun.”

Garret rolled his head to face him. “What?”