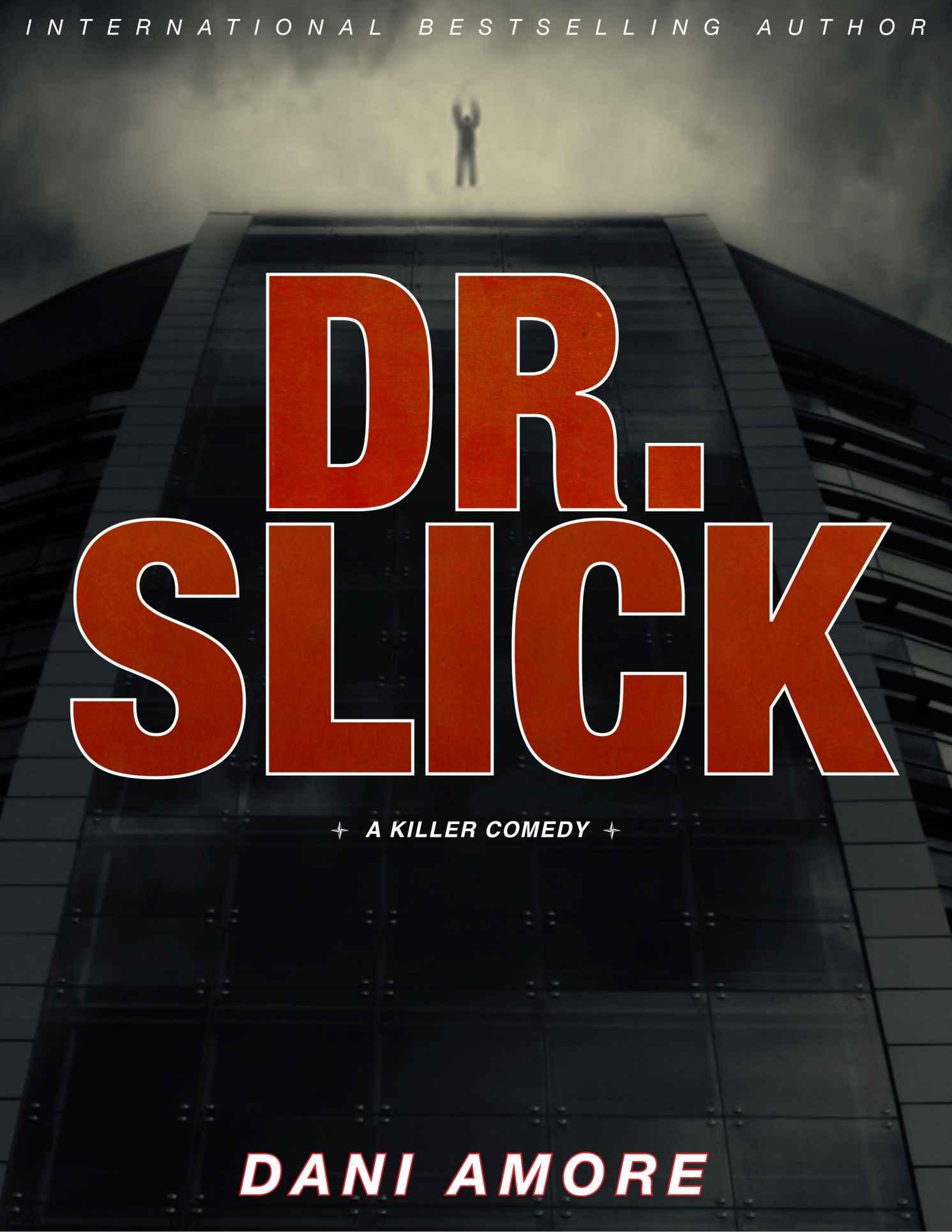 DR. SLICK
is a work of fiction. Names, characters, places, and incidents either are the product of the author’s imagination or are used fictitiously. Any resemblance to actual persons, living or dead, events, or locales is entirely coincidental.

No part of this publication may be reproduced, stored in a retrieval system, or transmitted, in any form or by any means, electronic, mechanical, photocopying, recording, or otherwise, without prior written permission from the author.

Chaos reigns in the classroom as Ms. Calisi, a very attractive woman in her late twenties, brings her group of five and six-year olds to order.

“All right, kids. Can I have your attention, please?” she says.

The kids quiet down and we see that one child, a girl named Lisa Goddard, is sitting on the lap of her father.  Tom Goddard is a typical Dad in his early thirties.  He’s handsome in an everyman kind of way, despite the beginnings of a small spare tire.

“We have a very special guest today, a parent volunteer,” Ms. Calisi says.

The kids all look at Tom Goddard, who gives a semi embarrassed wave.

Lisa Goddard stands up. She’s cute as a button and very confident. She speaks with good volume and displays a lot of poise.

“Okay, Mr. Goddard, why don’t you tell the kids a little about yourself?” Ms. Calisi says.

Goddard stands and he seems less confident than his daughter. He stands awkwardly and doesn’t quite know what to do with his hands.

“Well, I’m a writer at an advertising agency–“

“Louder, please. Use your big boy voice,” the teacher says.

Tom is caught off guard and embarrassed as some of the kids snicker at the grown-up being reprimanded by the teacher.

“Yes, I’m a writer at an ad agency. I write commercials mostly, and I’m very happy to be here. I think I can learn a lot from you.”

A girl raises her hand. Tom nods to her.

Tom’s face turns beet red and he is at a loss for words.

Luckily, his daughter comes to the rescue.

“Mom says he eats too much and doesn’t exercise enough,” Lisa says.

Even Ms. Calisi is now laughing.

“Men can have breasts,” another boy points out.  “My brother calls them man titties.”

The classroom erupts with laughter and Ms. Calisi gets to her feet.

The kids laugh and Tom looks at Ms. Calisi, who is failing to conceal her laughter as well.

Tom looks at his daughter, his face red, looking like he wants to crawl under a rock.

The class finally quiets down and Tom manages to breathe a sigh of relief that the torture of embarrassment is over.

“And to settle this argument, Ms. Calisi says, “The politically correct term is man breasts.”

She looks at Tom smiling, and Tom closes his eyes.

Tom’s office is pretty typical for an ad agency creative: desk, bookshelves, and computer.  A Nerf basketball hoop hangs on the wall. There are a few advertising trophies and pictures of the family on the desk.

Tom sets down his briefcase and turns on his computer, just as his friend steps into the doorway.

“Nice of you to finally join us.”

“I hope they helped you with your penmanship.” Dylan does an imitation of a Neanderthal trying to use an implement, complete with guttural speech.

“Got time for a game?” Dylan asks.

“We’ve got a 12 o’clock meeting. American Oil.  We’re supposed to have print and television ideas,” he says.

“Ah, it’s just the first round, they’re not looking for much,” Dylan points out.

“You scared of me? That the problem?” Dylan taunts.

“The meeting’s a half-hour away!”

“I’m gonna spank you,” Dylan says.  He leaves Tom’s office and Tom double-clicks an icon on his desktop. An image of a sniper rifle and the word SNIPER! appear on the screen followed by a cyber battlefield with a sniper rifle.

The cyber version of Tom steps forward and suddenly the screen fills with red as his player falls to the ground, his head blown clean off.

Through the wall, Tom hears Dylan howling with glee.

Dylan pounds his fist on the wall that separates his office from Tom’s.

“Want some more?” he calls out.

Tom ignores him as his cyber character regenerates but then his head is blown off again.

“Eat it baby,” Tom hears through the wall.

Tom grits his teeth in anger.

Morgan Wolcott is in his late forties, early fifties, clinging to the notion that he’s still very hip. He’s dressed in casual clothes with Camper shoes and thick black glasses.

His mostly gray hair is combed forward and moussed into a little point at the front.

Tom hurriedly quits the SNIPER game, not doing a good job hiding the fact that he’s just been busted.

“Everything okay in here?”

Suddenly, there’s a pounding on the wall and Dylan’s voice can be heard.

Tom is frozen at his desk and Morgan glances sideways at the wall.

“Tom, I just wanted to let you know that I’m expecting big ideas on this American Oil project,” Wolcott says.

“I’m looking forward to it, too,” Tom says.  “Good thing this is just the first round and we’ve got time–“

“First round?” Wolcott says, surprise in his voice.

“No, this is it, Tom. First round and last round. One shot only. This is why we get paid the big bucks.  They moved the deadline up. It’s crunch time, baby.”

“Just bring your A-game, Tom,” Wolcott says, cutting him off.  “Everybody else is.  And between you and me, Tom? You’ve had plenty of at-bats, it’s time you hit a home run.”

Morgan leaves without saying a word. Dylan ducks into the doorway, pointing an imaginary sniper rifle at him.

It’s the big American Oil meeting at Tom’s ad agency and the giant round conference table is full of people.

Morgan is sitting at the head of the table, clearly holding court. Tom is sitting halfway down the table.

He looks pale and nervous.

Kelly Moore, a hip, stylish woman in her late twenties is finishing up her presentation.  She’s very poised and confident.

“And I think if American Oil really wants to...push the envelope...if they really want to...rattle people’s cages...I think this campaign is it,” she finishes.

She sits down and there’s silence as all heads turn toward Morgan. He taps a pencil against his lips, puts his hands behind his head and stares at the ceiling.

“Do you see that?” he finally says.

He points to Kelly. No one answers.

“That’s how it’s done, my friends. The gold star goes to Kelly,” he says

The room breathes a collective sigh of relief. We see Tom sitting next to Dylan.

“Gold star?” Dylan says to Tom under his breath.  “ What are we in, first grade?”

Wolcott again addresses the group.  “I agree with Kelly. American Oil needs something edgy, something that’ll kick the oil industry in the ass. I think Kelly’s campaign is perfectly strategized and perfectly executed. A few tweaks of the copy and we’re good to go. Well done.”

“Well, luckily, no one has to follow that huge idea as I believe everyone has presented so-“

Suddenly, he notices Tom, who is practically slinking into his seat.

“You know, Kelly really nailed it, so if there isn’t enough time–“

“You know, I haven’t really had a chance-“ Tom starts to say.

“Come on Tom, suck it up and show us what you’ve got!” Wolcott barks.

Tom looks around the room. Most everyone is looking away from him, shifting uncomfortably in their seats. Even Dylan can’t look at him.

Tom walks out of the conference room looking like a beaten man.

Kelly walks out and pulls him aside.

“He had no right to be so brutal. I liked your idea,” she says.

Tom looks at her with a dazed expression on his face.  “I thought this would just be the first round.”

Kelly shrugs her shoulders and walks away.

“Tom, in my office,” Wolcott says from behind him.

Tom’s mind is filled with dread as he follows his boss to the corner office.

“Dr. Slick?” Wolcott says to Tom, his face filled with anger and repulsion.

“I think I got it - outwitted once again by American Oil?” Wolcott says, his voice thick with sarcasm.

Tom nods like a kid who got caught with a Playboy magazine by his parents.

“Are you out of your mind, Tom? With environmentalists crawling out of the woodwork? American Oil has a spotty record with the environment. It was in the brief, did you read it?”

“Of course I read it,” Tom counters. “In my idea, Dr. Slick is the competition - not American – not our client.”

Wolcott throws his hands in the air.  “Oh come on.  We both know the public remembers virtually nothing about commercials.  Half the time they can’t even tell you what company it was for. The most anyone would remember about your spots would be Dr. Slick and American Oil. If I presented that piece of shit idea, we’d lose the goddamn account!”

“I guess I should have been more aware of the strategy, but since I thought it was the first round-“

Morgan spins in his chair and punches a button on his phone.

“Mary, can you bring me a latte?” he says into the intercom.

Morgan stands up, looks out over the impressive view of Chicago.

“Your work,” Wolcott continues.  “It’s not twirling my balls.”

Tom winces at the word.

“Well, actually I am. I need you to be more driven. I think the answer is twofold. One, if you don’t turn things around in one week, you’re fired.”

“Fired,” Wolcott repeats, his hand slapping the top of his desk.

“And the second thing?” Tom says.

“This is a good company, Tom. With lots of resources. Books, video, audio programs, references. I want you to look into the resource center, find out some things that will help you. In the next week I want you to start...”

Wolcott holds his hands out, looking for just the right words.

Morgan looks at Tom with a cool expression.