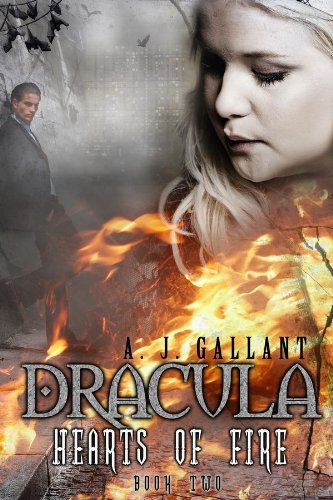 No part of this novel may be reproduced, scanned or distributed in any printed or electronic form without permission. Purchase only authorized editions. This book is a work of fiction.
It is a product of the author’s creativity.
Characters, names, incidents and places are either the products of the author’s imagi
nation or are used fictitiously.

To view other novels by A. J. Gallant visit his author page

Cover art
for this trilogy
by Staci
at Author Creations

In everyone’s life, at some time,

o
ur inner fire goes out.

It is then burst into flame by an

encounter with another human being.

W
e should all be thankful for those people

who rekindle the inner spirit.

The adventure of a lifetime

b
egins with the first breath

D
RACULA WALKED GINGERLY
onto the brown carpeted living room floor as he carried
his daughter
Jenn
y and
put her down
on the sofa
,
with his strength she was as light as air.
T
he 12-year-ol
d awoke from h
er fainting
spell; the reality of it was
like running downstairs on Christmas morning an
d discovering that Christmas had been cancelled
.
Her father was Dracula!
Who could have been prepared for such a revelation? She didn’t want it to be true but there he was looking all proud and effervescent. She definitely had to admit that he was a handsome vampire, although perhaps a monster, perhaps not.

Dracula
felt sorry for the child having to meet her father for the first time under such circumstances
, a bombshell that no one should have dropped upon them like that
.
The shrapnel
from the revelation had cut through her
, splattering
warm thoughts and good feelings
.
Her mind was a jumble of feelings colliding into one another.
Jenny didn’t want to believe it and yet she knew it was true. Her father was Dracula? Her father was Dracula! Jenny’s father
WAS DRACULA.

But what did that make her exactly?

Dracula
had attempted in the past to convince Allison to reveal the truth
to his daughter
, but she had always put it off to the future.
She didn’t want her daughter to be burdened with the fact that her father was THE king of all vampires.
There was a myriad of stories circulating about the Master, a lot of them horrible.
He warned her
that Jenn
y would feel cheated and that that hot potato
should have been revealed from the beginning.
Allison
was frightened of how it would affect Jenny in her day-to-day life.
She was sure the child would feel different about herself and that was worrying.
She was
also
afraid that Jenny’s reaction would put an immovable wedge between them.
But
now the bat was out of his cave
and no way to put him back in.

Allison didn’t want to be the type of
mother that never heard a peep from their children
as they grew into adults,
or in this case her only child.
Problem was
Allison
knew
that the concealment
had been wrong
but as the years went by the
wall that had hidden the truth had been reinforced by time itself. She
had endured more than one sleepless night
because of it
, especially when Dracula had threatened to spill it.
Allison had always been a smart
and level
headed individual, but perhaps she had erred in this situation.
Now the truth had to be dealt with as there was no going back.

“
Oh.
”
Jenny
immediately sat up and
stared at the both of them and was a little embarrassed in the fact that she had indeed fainted.
She shook her whit
e-blond hair out of her pretty
green eyes
and stared at her parents
.
Her parents!
The information that she
received had been quite a shock to her system, an overload of sort
s. She was a hybrid with extraordinary talents, with
a vampire for a f
ather.

Jenny was in fact a wizard, and a very powerful one at that.

S
he had
just
discovered that her real father was THE vampire.
As Jenny considered her young life it was all starting to make sense; she now knew why she was such a powerful little thing.
Simultaneously mad and confused, she was unsure of her next move.
She’d like to kick both of them in the butt, but she knew that wasn’t going to happen. Jenny was so mad that she was tempted to pick up the sofa and throw it, and she could do it.
Her entire life had been a lie of sorts and she felt betrayed.
It was an untruth deeper than the ocean.

Allison felt sorry for lying to her
daughter
for all those years
; she felt the stress from the disclosure
in the headache that was progressing
.
How was she ever to make up for it?
She wished
that she had told her years ago and n
ow she wondered if she would ever be forgiven
for such a transgression.
The responsibility was all on her shoulders.
“Jenny, are you okay?”

Log of the S.S. The Mrs Unguentine by Stanley Crawford
Tri Me (Primrose, Minnesota, Book 4) by Dymond, Mia
Savage Hunger: Savage, Book 1 by Shelli Stevens
A Lady of High Regard by Tracie Peterson
Gene Drifters: The Clone Soldier Chronicles-Book III by Takemoto, D.J.
The Second Time Around by Angie Daniels
The Paris Librarian by Mark Pryor
Amazing Disgrace by James Hamilton-Paterson
Traded by Lorhainne Eckhart
Mummy's Favourite by Sarah Flint