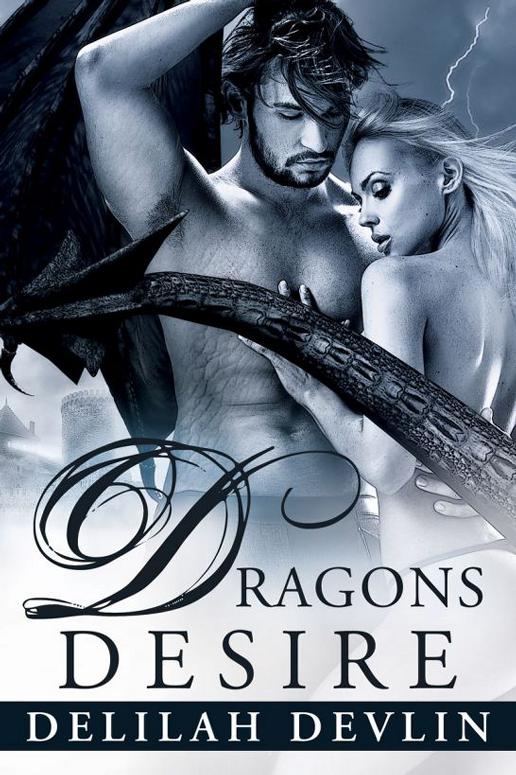 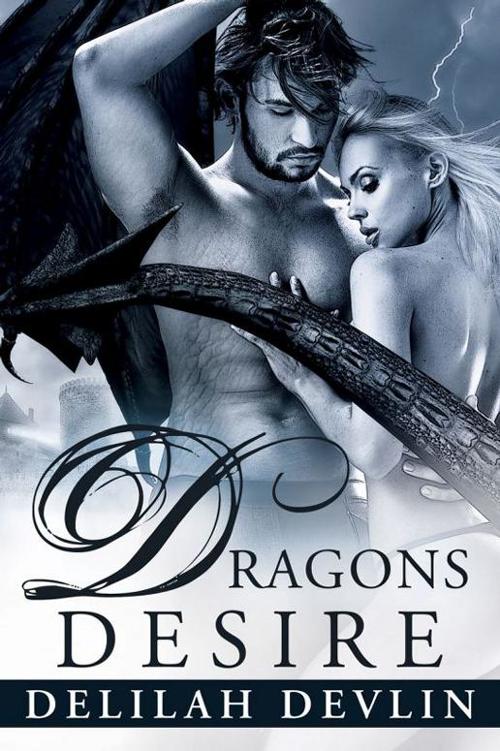 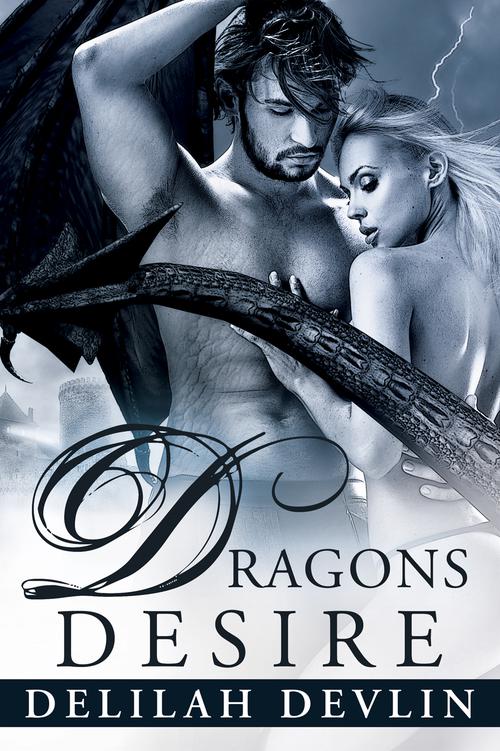 Dragon’s Desire
Delilah Devlin
This eBook is
not
transferable.
It cannot be resold, shared or given away because that will be considered an infringement on the copyright for this work.
This book is a work of fiction. The names, characters, places, and incidents are products of the Delilah’s imagination and should not be construed as real. Any resemblance to persons, living or dead, actual events, locale or organizations is entirely coincidental.
Dragon’s Desire
Copyright © 2012 by Delilah Devlin
Published by Delilah Devlin at Smashwords
Edited by Layla Chase
Cover design by Robin Ludwig Design Inc.
http://www.gobookcoverdesign.com/
All Rights Are Reserved. No part of this book may be used or reproduced in any manner whatsoever without written permission
by the author
, except for brief quotations for review purposes.
Smashwords License Statement
This ebook is licensed for your personal enjoyment only. This ebook may not be re-sold or given away to other people. If you would like to share this book with another person, please purchase an additional copy for each reader. If you’re reading this book and did not purchase it, or it was not purchased for your use only, then please return to Smashwords.com and purchase your own copy. Thank you for respecting the hard work of this author.
Chapter One
Ragged wisps of clouds crawled across the face of the full moon, lightening then darkening the barren precipice. Local villagers called it The Dragon’s Atoll. The
bürgermeister
had given him directions, told him when to begin the climb, warning him the atoll only existed during the full moon before it disappeared for another hundred years.
An hour earlier, the knight had climbed the rocky precipice and now hid behind a stone pillar, sword drawn. He listened to the soft sobs of the girl the villagers had chained to the pillar according to rules handed down for a millennium, or so the elders had said. She was their sacrifice, their gift to the winged demon to pacify its hunger and spare them its wrath.

The knight had silently scoffed at their fear. He didn’t believe in dragons or demons. At least, not mythical beasts. He’d seen enough in his travels to Palestine and back to know evil existed. True evil resided in the hearts of greedy, bloodthirsty men.

Still, the purse filled with gold the villagers offered him to slay the dragon and rid them of their curse convinced him to remain where he was.

“I shall die,” the girl whispered, “savaged by the beast.”

“You will not die,” he whispered, casting her a sideways glance. “’Tis only a tale.”

“You weren’t raised on tales of the horror. Do you think they are only stories told to frighten children?” she said, her voice rising toward the end.

She was a comely thing with golden hair and gentle curves. He’d fought shock and disgust when the old men had cut her clothing from her body to leave her nude. The night was chilly and the sound of her teeth clacking as her body shivered had him reaching for his cloak. If they were bound to wait together, she needn’t freeze.

Come morning, he’d lead her from the mountain and deliver her to her father, the bürgermeister who’d hired him, safe and sound. He stepped around the pillar and bent over to slip the cloak around her.

Instead, she shook her head. “You mustn’t.”

“I’ll not be the reason my village suffers.”

He sighed and dropped the cloak, trying not to let his gaze slide down her naked frame but failing. Her nipples were ruched, the tips drawn into tight buds on her round, firm mounds. “How were you so unlucky to be chosen?” he asked quietly, leaning his back against the gray granite rock so he looked out across the atoll rather than at her.
“A lottery of maidens is held. All our names are entered.”
His lips twitched, and he shot her a glance. “And how do the villagers know you are truly virgin?”

A frown drew her pretty brows together. “The midwife examines all the women.”

“If you knew you risked this fate, why did you not lie with a man to render yourself unfit?”

“Because as awful as this fate is, ‘tis worse to cheat the dragon. Every family guards the virtue of their daughters to spare the village a terrible fate.” Her eyelids closed for a moment. When she opened them again, tears threatened to overflow the lower lids. “You shouldn’t be here. My father was wrong to try to end the curse.”

“You would sacrifice yourself willingly?”

“I have a younger brother, cousins, friends.” She shook her head. “I wouldn’t want to see them harmed.”

“What exactly happens when this beast appears?”

She swallowed hard. “He devours the virgin.”

The knight grunted, disbelieving. Why did fairy tale monsters always seek a virgin’s flesh? “It’s likely only feral pigs or wolves you should fear.”

“No wolf or pig would devour a woman whole.”

Her indrawn breath shook. “There is never bone nor blood, hair nor flesh remaining. The creature opens his mouth and swallows his offering in a single gulp.”

Compassion rose and he grasped her cold hand. “I will protect you, whether from dragon or pig. No harm shall come to you.”

“I wish I could believe your vow.” Her eyelids drifted closed.
A sound came from above them. At first, he thought the fluttering must be the wings of a large owl. As the flapping drew closer, his heartbeat slowed and pounded louder, a steady thumping to match the beat of the large wings stirring the air.
“Hide!” she whispered, staring upward, her expression tightening with fear.
Body tensing, he ducked behind the pillar, tightened his grip on his sword, and searched the air above. Again, the clouds masked the moon, sending everything into pitch darkness.

A deep, resonant thud shook the ground as a large shadow settled onto the atoll.

The girl whimpered, and her chains rattled against stone. “No, no.”

The knight sprang from around the rock to stand in front of her, sword raised.

A loud, angry roar pierced the silence, hot breath gusting in the knight’s face. The clouds cleared and moonlight shone on a large elongated head, silvered the scales covering the creature he faced—a dragon indeed—with a wingspan that eclipsed the width of the atoll. Those wings flapped, producing gusts of wind so strong he was pushed back against the girl whose chilled body leaned into his as she sobbed. Sweet Mother Mary, his sword seemed a puny weapon against the great beast.

Another roar rent the air. The knight recovered from his shock and struck out with his sword arm, stabbing toward the creature’s chest. A tree-trunk thick limb batted it away with a clatter, and then another limb, fisted, slammed against his chest, toppling him to the side.

Breath whooshed out with the hard thud, and he landed on his back. Before he could regain his breath and think to roll away, a heavy foot pressed against his belly, holding him to the hard ground. For a moment, fear froze his mind.

With the knight helplessly restrained, the dragon turned his head to the girl. He sniffed the air around her. Its tongue flickered out and licked her breast, her belly, then flickered out again to stroke between her legs before retracting between jaws filled with ragged, gnashing teeth.

Thrashing her head, the girl screamed and flattened herself against the pillar, but to no avail. The creature moved closer and lowered its head. She shut her eyes, but the dragon nuzzled her cheek. Her eyes opened to peek at the beast then widened. The pair stared for a long moment. Slowly, her body grew lax, her eyes vacant, and then she whimpered and craned her neck to rub a cheek against the dragon’s head.

If there were dragons, there must also be magic at work because the woman’s expression warmed, her eyelids dreamily drifted downward as her head fell back.

Again, the thick tongue struck out and licked her cheek, her neck, then trailed lower until it disappeared between her legs, which she willingly parted. Her body bowed, shuddering as the tongue pushed upward, disappearing as his large snout burrowed between her legs.

The knight shook his head, grabbed the hard-scaled leg, and tried to shove it away. He’d promised he’d save her. Like other promises he’d made, to children cowering under beds as crusaders pillaged their houses, he was helpless to halt what was happening.

But what
was
happening? No violence occurred, no rending of flesh, and from the way the woman moaned and undulated, she felt only pleasure.

The woman shuddered then gave a faint cry and slumped against the rock, held upright only by the iron manacles encircling her wrists.

The dragon snorted, retracted his tongue, then leaned away from the woman to gaze down at the knight.

The former Templar who’d rejected the pope’s edicts, who’d decried God for the horrors he’d witnessed and participated in, realized in that moment, he’d been wrong all along. Real devils walked this earth.

If he’d had breath, he’d have prayed for his soul, because he was sure he was about to meet his death.

However, the dragon trembled. The foot clamped to the knight’s belly lifted and fell away. In a slow move, the dragon curled inward and the scales began to fall like shards of glass to shatter into dust on the ground around him.

The knight froze, knowing he could reach for his sword, but curious now to understand what was happening to the creature, because the beast diminished in size. Wings flung upward then melted down into shoulders clothed in skin. The large crenellated head bowed between smooth shoulders, then reshaped.

At last, a man, naked as the woman hanging on the pillar, rested on his hands and knees, gasping for breath. Turning his head slowly, he looked to the knight. “Are you harmed?”

Against a dry throat, the knight swallowed. “I am not.”

The man lurched upward, toward the woman. “We must remove her. Have you something to cover her body?”

“A cloak,” the knight said softly. “You do not mean her harm?”

“I required her virgin blood. But not her death.” He flung out an arm, pointing toward the sword lying on the ground. “You’ve a sword. I am defenseless. Do you mean to kill me?”

“Is that what you wish?” he asked, surprised. The creature could have killed him in his former form, and yet now, seemed defeated.

“If it means that I will never cause another fear, then yes, it is what I wish.”

“The woman showed no fear once you...licked her.”

“She saw me as I am now. Not the beast. It was just a bit of magic to soothe her.”

The Ties That Bind by Warren Adler
This Charming Man by Keyes, Marian
Fall of Night by Rachel Caine
Anonymous Venetian by Donna Leon
Beyond Tears: Living After Losing a Child by Ellen Mitchell
Muller, Marcia - [McCone 02] - Ask the Cards a Question 3S(v1)(html)
A Tender Touch: A Donnelley Brother's Novel (Logan Point Book 4) by Carbonneau, Alannah
The Burning Dark by Adam Christopher
A Promise for Her Love by Elaina Lee
For Cam (Chicago Syndicate Book 4) by Naomi, Soraya